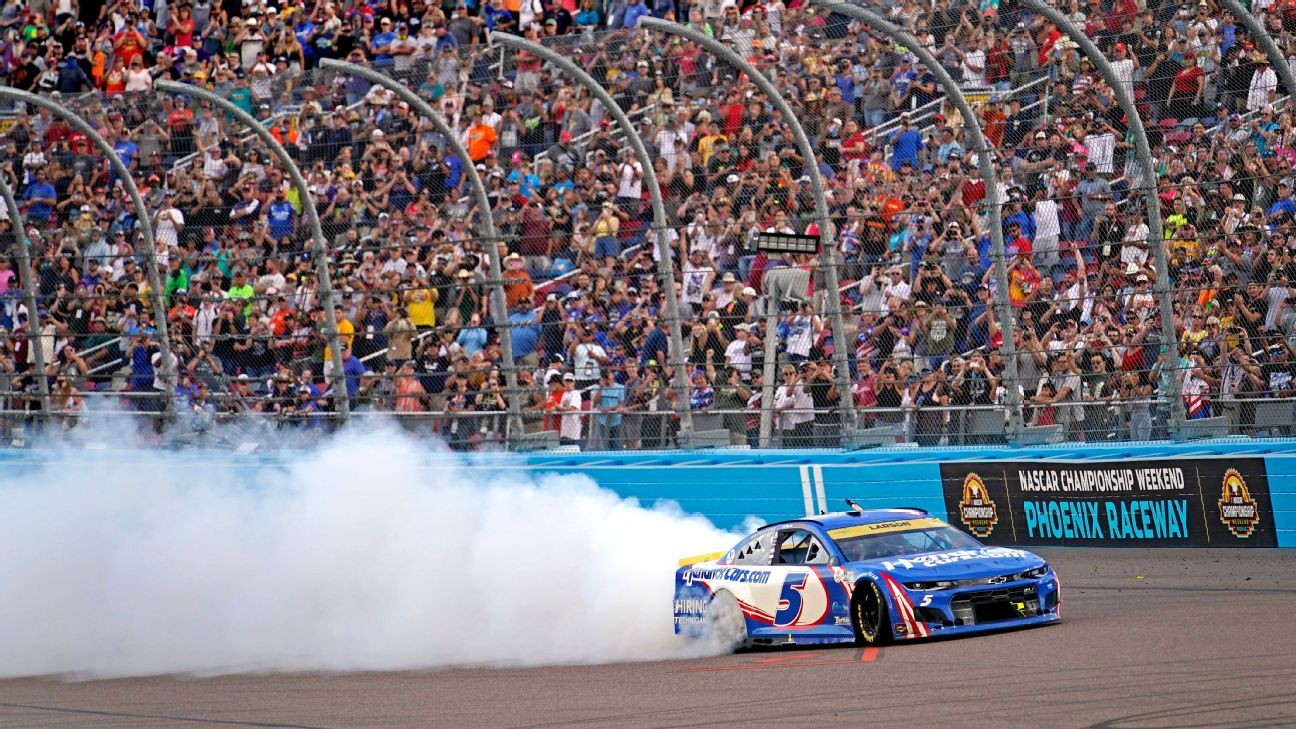 Welcome to the NASCAR playoffs!

Helpful hint: Don’t call it the Chase. And don’t dare call it the Playoff, singular. That’s what they do over in college football, where only four teams are in the College Football Playoff field. Here in stock car country, there are 16 teams in the title fight, but like CFP and bowl season, those 16 teams share their postseason stage with a bunch of other teams that are competing for wins, but not for the championship.

Confused? You aren’t alone. But that’s why we’re here. To answer your stock car queries, no matter if you’ve been watching NASCAR since Richard Petty was battling Bobby Allison or if you don’t know the difference between Chase Elliott and Chase Briscoe.

How does NASCAR’s postseason work? Who is in? Who is out (but also still out on the track)? How did we get here? Where are we going? Who is most likely to be standing in Victory Lane hoisting that very large Cup Series trophy 10 weeks from now? Grab a grease pencil and read ahead.

How’d we get here?

At the conclusion of what was easily the wackiest 26-race “regular season” since NASCAR’s so-called “Elimination Era” began in 2014, a whopping 15 of the 16 drivers who made the cut also won a race, and it would have been all 16 had Kansas Speedway winner Kurt Busch not been sidelined in late July by an ongoing bout with concussion-like symptoms.

The final open spot went to winless Ryan Blaney, who edged former Cup Series champ Martin Truex Jr. by a scant three points, but only because Austin Dillon was able to snake his way through a gigantic Big One crash at Daytona and went on to win the race by all of .128 seconds over a pair of guys who had already won a race this season. Had they won, Truex would be in the Playoff, too; or if Truex, who finished eighth, had managed to get by a couple of cars ahead of him, he would be and Blaney would be out. That’s how close it was.

This season is only the third in NASCAR’s nearly 75-year history that there were 16 different winners over the year’s first 26 races. The gold standard for competitive seasons in the modern era is still 2001, when 19 drivers won over 36 races. Considering that we’ve already had five first-time winners this year, Blaney and Truex are still winless, and another handful of drivers have had close calls but came up short (Bubba Wallace, second in Daytona 500; Chris Buescher, second at Sonoma; Corey Lajoie‘s battle with Elliott at Atlanta, etc.) there is still a chance to match or perhaps smash that mark.

If you’re scoring at home — and we are — that’s five former Cup Series champions, only one former multiple-time champ, along with four playoffs rookies and one true rookie in Daytona 500 winner Austin Cindric. As for the car manufacturers, Chevy leads the way with eight entries, followed by Ford (5) and Toyota (3).

The next 10 races will eliminate four racers every three weeks. If a driver wins one of those three, he automatically moves on to the next round. The remaining spots are determined by the points standings.

That’s 16 drivers contending in the first three races, 12 remaining in the next three, nine maintaining title hopes in the next three, and four drivers contesting the championship at the season finale at Phoenix Raceway on Nov. 6. The top finisher of those four is your NASCAR Cup Series champion. Easy-peasy, right? Unless you’re one of those four.

“You think it’s going to be the same, just take care of your business and race and move on, right?” said Joey Logano, who has made it into that final quartet four times. “But there is a definite sense of increasing pressure. We have made it into the finale feeling like the favorites and we’ve made it feeling like the underdog. All I know is that, however you got there, when that green flag comes out and there is 300-something laps to race for everything, for the entire season, it’s like, ‘Holy cow, this is real right now!'”

The round of 16 begins this weekend with NASCAR’s oldest and most grueling speedway event, the venerable Southern 500 at Darlington Raceway, a race and place that has been on the Cup Series calendar since its second-ever season in 1950. The elimination races for each Playoffs round are equally challenging. The Bristol night race marks the end of the round of 16, the Charlotte Roval closes out the round of 12, and the flat half-mile bullring Martinsville Speedway, the last track remaining from NASCAR’s first season of 1949, will determine which four will compete for the Cup the following weekend.

Championship Race (Round of 4)
Phoenix Raceway

Who are the favorites and who is doomed?

The good news for Dillon is that his dramatic dash into the playoffs was the stuff of movie scripts. Same for Cindric and his fellow first-time winners. The bad news is that since the Elimination Era began in 2014, those who barely make the field also typically make early exits, and even if they hold off elimination for a while, they don’t make the last four at season’s end. In the eight previous editions of this format, the deepest a driver has started the playoffs and gone on to win the title is seventh, accomplished by Kevin Harvick in 2014 and Logano four years later. Meanwhile, four of the eight champs started the postseason right where they ended it, in the top spot.

With that in mind, it’s hard to bet against Elliott, who has somehow managed to turn this 2022 of near-historic parity and unpredictability into a bit of a rout, winning the regular season title by a Snake River Canyon-like margin of 130 points over Logano.

The wise guys agree with that assessment. Headed into the playoffs, BetMGM has Elliott listed as the title favorite at 3-1, exactly where it had him when the green flag waved over the Daytona 500. It has Kyle Larson at 7-1 and Denny Hamlin 8-1. Not surprisingly, those behind the desk in the desert value age and experience, as future hall of famers who have struggled through big stretches of this season, like Kyle Busch, Logano and Harvick, are all among the top eight favorites at 12-1 and better.

There is one playoffs crasher whom the sportsbooks love now, even if they didn’t back in February. Congrats to anyone who put a paycheck down on Ross Chastain in February. Back then, the Watermelon Man was listed at 150-1 to hold the Cup this fall. Now he’s 8-1, fourth best among those in the playoffs.

“I think experience matters, heck, I know so,” explains 2021 champ Larson. “To me, the first time you are in a playoffs situation, it’s like the first time you go to a racetrack you’ve never been before. You need time to get your bearings. Once you do, once you know what to expect, the next time you come back you are more comfortable. You think it’s going to just be, ‘Hey, let’s race and don’t worry about it.’ But it is different. It’s also fun. I’m ready to go.”