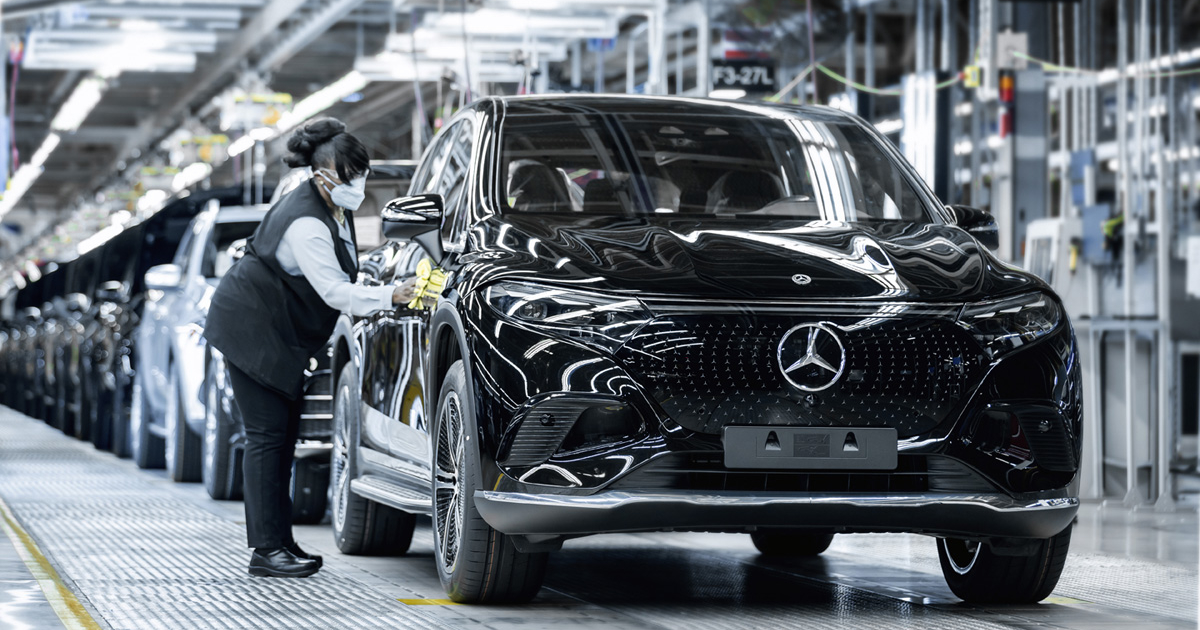 It’s a bold bet on EV adoption in the U.S. and worldwide.

The EQS full-size SUV is the first of two EVs initially planned for the factory, and will roll into U.S. stores in the fall. Early next year, the plant also will begin producing the EQE, the electric version of Mercedes’ top-selling GLE midsize crossover, Burzer said.

Vance will supply EQEs to all markets except China, pumping out more than 100,000 EVs next year, a third of its annual capacity of 305,000.

Much is riding on the Alabama plant as Mercedes pivots into an all-electric brand around the world in markets that are ready for the switch.

It launched its all-electric EQ subbrand with the debut of a battery-powered S-Class sedan last fall.

The U.S.-built EQS SUV will be joined in the lineup this year by the EQB compact crossover and the EQE midsize sedan. Next year, the portfolio gets expanded with the arrival of the EQE midsize crossover.

The automaker is still deciding on future EV sourcing plans, but Burzer said it is possible that the Alabama plant could become the company’s first all-electric factory.

Mercedes expects EVs to account for about half of its U.S. sales by 2030, executives revealed at the brand’s national dealer meeting earlier this year. And next year, Mercedes aims to sell up to 45,000 EQ-brand electric vehicles here.

The Inflation Reduction Act, recently signed by President Joe Biden, could juice Mercedes’ EV production and sourcing plans in the U.S. and across the continent.

The law extends a $7,500 federal tax credit for new electric vehicles built in North America. The EQS will qualify for the credit through Dec. 31.

But new restrictions that take into account where an EV’s battery and battery materials are sourced, as well as the vehicle’s price and the buyer’s income, take effect on Jan. 1. That will make all or nearly all EVs ineligible, said the Alliance for Automotive Innovation, an industry trade group. The new sourcing rules will change annually.

Mercedes has not revealed the sticker price for the new Alabama EV, but the brand’s high-priced cars and high-income customers are unlikely to qualify under the new rules.

Nonetheless, Burzer said of the new law, “tax credits are important. We support it.”

Mercedes could begin manufacturing entry-level EV models in the U.S. to leverage the new tax credit. But Burzer emphasized that no decisions have been made.

“It’s a very complex situation,” he said. “We have to watch what’s going on, and then we have to take decisions.”

What’s more certain is that the tax credit will accelerate the localization of the EV supply chain already underway.

“It was always a focus to localize the supply chain, but you see even more interest right now — also from suppliers wanting to come and produce” in North America, Burzer said.

Earlier this week, Mercedes said it is finalizing an agreement with lithium miner Rock Tech Lithium based in Vancouver, British Columbia, to supply Mercedes-Benz’s European operations with up to 10,000 tons of lithium hydroxide annually starting in 2026.

In March, the automaker opened a 177,000-square-foot battery assembly venture on 270 acres near the Vance vehicle factory.

And in April, supplier Envision AESC said it will build a $2 billion factory 300 miles away in Bowling Green, Ky., to supply a new generation of battery components for Mercedes.

Burzer left open the door for domestic sourcing of more EV powertrain components, saying: “We are constantly talking to the suppliers.”