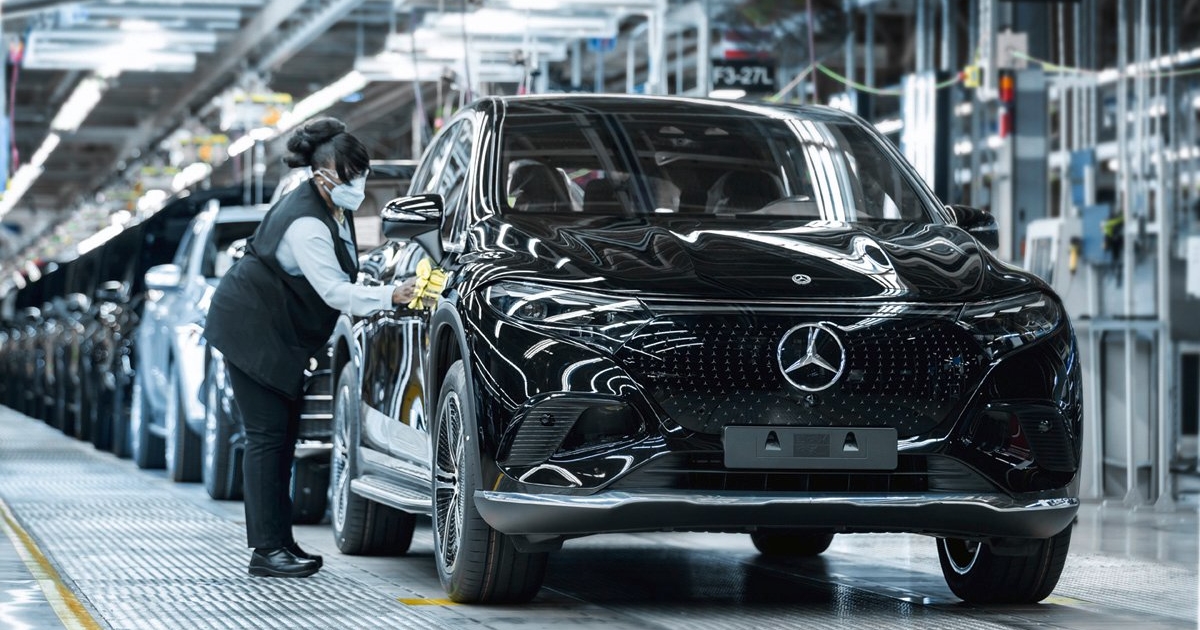 Mercedes-Benz has started production of the EQS SUV as it expands its all-electric lineup in its attempt to catch up to EV front-runner Tesla.

The EQS SUV will be the brand’s flagship full-electric SUV and is being built for global markets including Europe at Mercedes’s U.S. plant in Vance, Alabama.

It’s the third model based on Mercedes’ EVA2 architecture for upper market segment EVs after the EQS and slightly smaller EQE.

The Vance factory, one of seven EV production sites on three continents, could deliver more than 100,000 EVs next year, or about a third of its 305,000-unit annual capacity.

The company’s Alabama plant will continue to build gasoline-powered versions of the GLE and GLS alongside the battery-electric models. EV production will integrate into the plant’s existing body and paint shop and assembly lines.

The newly electrified Alabama plant is part of an “EV Belt” emerging across the Southeast of the U.S.

In March, the automaker opened a battery assembly venture located on 270 acres near the main vehicle factory.

And in April, supplier Envision AESC said it will build a $2 billion factory 300 miles away in Bowling Green, Kentucky, to supply a new generation of battery components for Mercedes.

“We will produce batteries for numerous electric vehicle manufacturers,” Matsumoto told Automotive News. “We have growth plans for both the U.S. and other regions around the world.”

Much is riding on the Alabama plant as Mercedes pivots into an all-electric brand in markets ready for the switch.

The company expects EVs to account for about half of its U.S. sales by 2030, executives revealed at the brand’s national dealer meeting this year. Next year, Mercedes aims to sell up to 45,000 EQ-branded electric vehicles here.

Mercedes launched its all-electric EQ subbrand with the debut of the EQS sedan last fall. The EQS SUV will be joined in the U.S. this year by two electric crossovers, the compact EQB and midsize EQE SUV. The EQE sedan went on sale in Europe earlier this year and will be launched in the U.S. toward the end of the second quarter.

The EQS SUV, built on Mercedes’ new EVA2 platform, is powered by a 107.8-kilowatt-hour battery that delivers an estimated 400 miles of driving range.

A Maybach variant of the electric SUV will also be built in Vance and exported to Europe and other global markets.