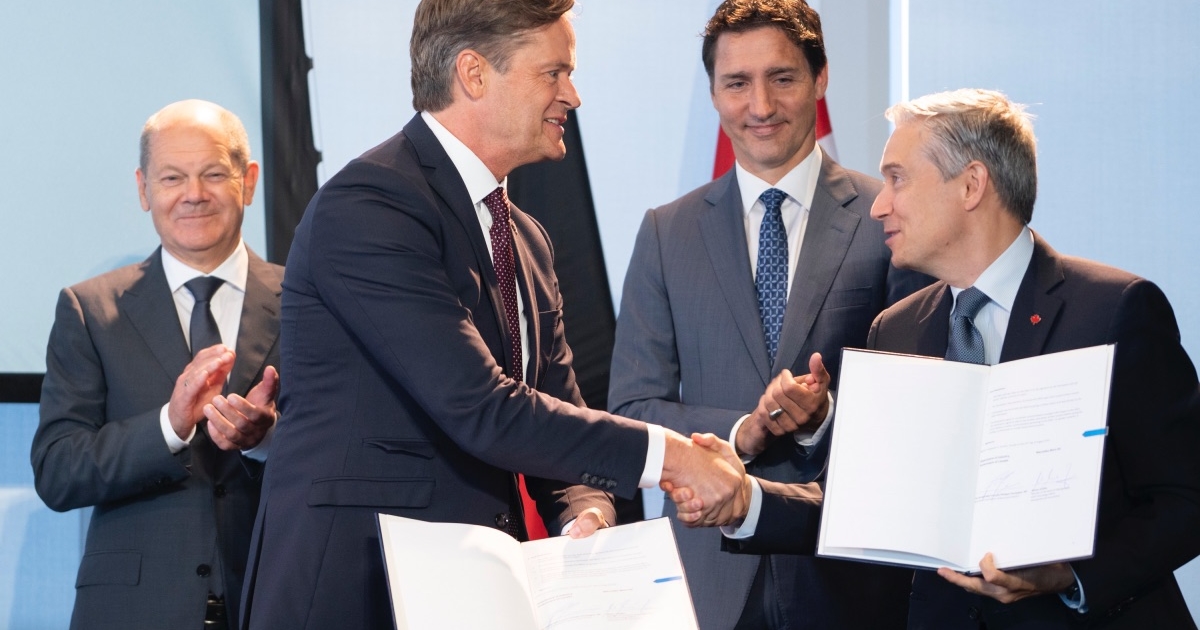 Mercedes-Benz Group and Volkswagen Group on Tuesday signed deals with the Canadian government to secure access to Canada’s large stores of key battery materials such as lithium, cobalt, nickel and graphite, as the German companies compete for scarce supplies of raw materials with other automakers shifting to electric vehicles.

“What we are experiencing right now is a perfect storm — a multitude of overlapping and mutually reinforcing global crises,” Scholz said at the event hosted by the Canadian-German Chamber of Industry and Commerce. He pointed specifically to Russia’s invasion of Ukraine and its ripple effects on the energy and resource sectors.

Scholz, who is midway through a three-day visit to Canada accompanied by numerous German business leaders, said Canada has “almost boundless potential to become a superpower” in sustainable resource production. Germany is intent to become one of Canada’s closest partners, he added, and the new deals with Mercedes-Benz and Volkswagen show the “opportunities are there.”

The MOU between Canada and the pair of automakers lack firm commitments from either set of parties, focusing instead on further “exploring” the opportunities in Canada’s raw materials and processing sectors.

Nevertheless, Champagne said the agreements “cement” the interest of the German automakers in Canada, boost the battery ecosystem in Canada and prepare the country for investments.

“What you saw today is a completely new chapter even for the automotive industry in Canada because now we have the German automakers. We were not even on their radar screen, now we’re centre in their radar, and I think that’s going to lead to us partnering with them in a strategic way.”

Schaefer said the collaboration with Canada is a “great fit” as the company rapidly ramps up battery production and sees its requirements for critical minerals balloon.

Mercedes-Benz is also on the cusp of firming up an agreement with a Canadian mining firm that will build off the deal with Ottawa, Schaefer added. The automaker disclosed it is currently finalizing an agreement with Vancouver-based lithium miner Rock Lake Lithium, which is developing a mine in Ontario. The deal will see Rock Lake supply Mercedes-Benz’s European operations with up to 10,000 tons of lithium hydroxide annually starting in 2026.

“We’d like to refine here as well. The question is, what can you do in a limited amount of time? The capital even needed for exploration and all the other activities needed are huge … so I think we have to divide a little bit the work that has been done.

“Once [refining] is possible and doable, then we will enter into it.”

Volkswagen, likewise, said the MOU with the Canadian government will help advance its battery supply chain in North America and beyond.

The deal is designed to forge closer ties between the Canadian mining sector and PowerCo, the VW entity taking the lead on the automaker’s battery supply chain business.

Diess, who is departing as VW CEO effective Sept. 1, said working hand in hand with government is an “absolute prerequisite” as Volkswagen rolls out electric models and works toward its climate goals.

“The supply of battery raw materials and the production of precursor and cathode materials with a low carbon footprint will allow for a fast and sustainable ramp- up of battery capacity — a key lever for our growth strategy in North America,” he said in a release.

Volkswagen said it sees “significant prospects” to ramp up cathode material production alongside its partners, relying on Canadian suppliers to “act as raw material suppliers, refiners and processors.” The company said it has plans to build a dedicated battery cell plant in North America and is currently examining locations.