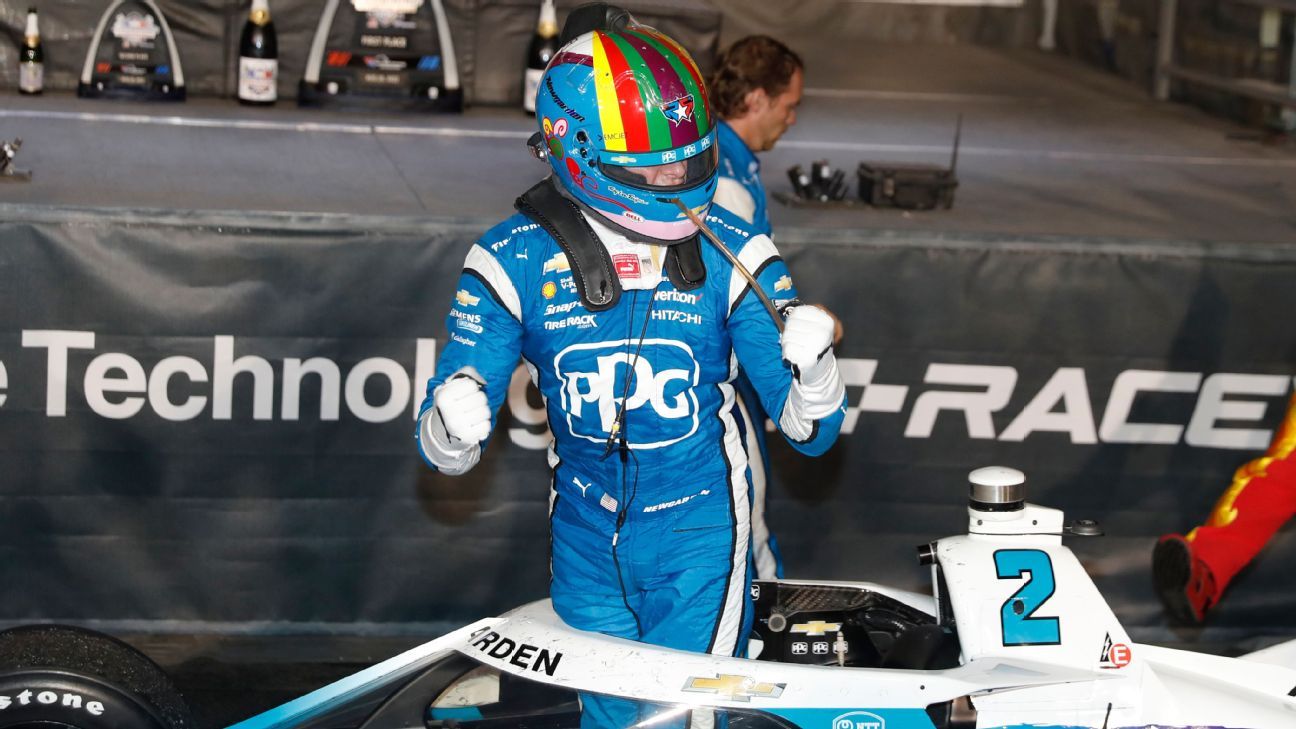 MADISON, Ill. — Josef Newgarden considers teammate Scott McLaughlin one of his closest friends, his “Bus Bro” at the racetrack, and the driver he knows will race him clean with a win on the line.

That made it a lot easier for Newgarden to chase down McLaughlin on a restart following a rain delay to reclaim the lead at World Wide Technology Raceway, take his IndyCar-best fifth win of the season and tighten the championship race.

“With Scott, it’s a little bittersweet because we just have a great friendship,” Newgarden said. “He’s a tremendous competitor. I rank Scott one of the elite drivers in the world, not just here, but in the world. He’s top class, very difficult to beat. We get along really great, he’s a tremendous teammate, a hard worker and it’s not the easiest friendship to have because at the end of the day, we are competing.

Mired in the middle of the championship picture despite having more than twice the wins of any rival, Newgarden is now in the heart of the title hunt.

The rain delay saved the race for Newgarden.

McLaughlin had taken the lead from him on pit strategy shortly before the race was stopped for rain and lightning with 43 laps remaining. After a delay of just over 2 hours, the race resumed with 36 laps to go and Newgarden needed only one to get past his buddy for the race-winning pass.

David Malukas, the rookie for Dale Coyne Racing, put on a stunning display of picking his way through traffic after the final restart. He passed McLaughlin on the final lap to disrupt the potential Penske 1-2 finish, and had the race gone one more lap, Malukas might have had a shot at catching Newgarden for the win.

Newgarden in a Chevrolet beat Malukas in a Honda by 0.4708-seconds.

“They said ‘Do you see them up front?’ and I just see two Penskes and think ‘Oh my God, they’re Penskes,'” the 20-year-old said. “They were tough. They were tough to even get any kind of suck to get close to them.”

With two laps to go, Malukas at last ventured into the top line of the track and found it racy enough to catch McLaughlin. He instantly lamented not trying the lane earlier.

“If I would have done that a bit sooner, maybe we could have done something for Newgarden,” Malukas said. “That is a win for me, a win for the team. We started off this season a bit rough and ever since May we’ve been getting better and better. We knew a podium was in sight.”

Takuma Sato finished fifth for Coyne and was followed by Power, who had a near perfect first half of the race and was routing the field until a split Penske strategy pushed him back into traffic.

It was a disappointing race for the title contenders from Chip Ganassi Racing; all three lost ground in the standings. Marcus Ericsson finished seventh, Scott Dixon was eighth and reigning IndyCar champion Alex Palou was ninth. Dixon dropped from second in the standings, six points out, to third in points and 14 out.

Even so, only 17 points separate the top four in the standings from Power to Ericsson in one of the most gripping title races in years. At Gateway, the 520 total passes were the most since 2017 when IndyCar returned to the track, and a record 179 of those passes were for position.

Matthew Brabham briefly stopped Linus Lundqvist’s rout in Indy Lights by winning the junior series race earlier Saturday. It was the second win of the season for the Andretti Autosport driver, who is the grandson of three-time Formula One World Champion Jack Brabham.

Lundqvist, who has won five of 10 races this season, finished second and Brabham conceded the title to him. Brabham’s win moved him to second in the standings, more than 100 points behind Lundqvist with three races remaining.

“I’m just focusing on race wins personally. Anything can happen, but I seriously doubt it,” Brabham said.

Lundqvist, meanwhile, has had slow going in talks on a promotion to IndyCar next season. He drive for an affiliate team of Dale Coyne Racing, which is in contract talks on bringing Takuma Sato back another year.

“I’m calling people. Not the other way around, unfortunately,” said Lundqvist, adding his success rate was “about 50% ratio” on getting a team on the phone.

“I just call them 10 times. They’re bound to pick up sometimes,” he said.

IndyCar races Sept. 24 on the road course at Portland. Palou won from the pole last year to reclaim the IndyCar points lead and ultimately win his first championship.