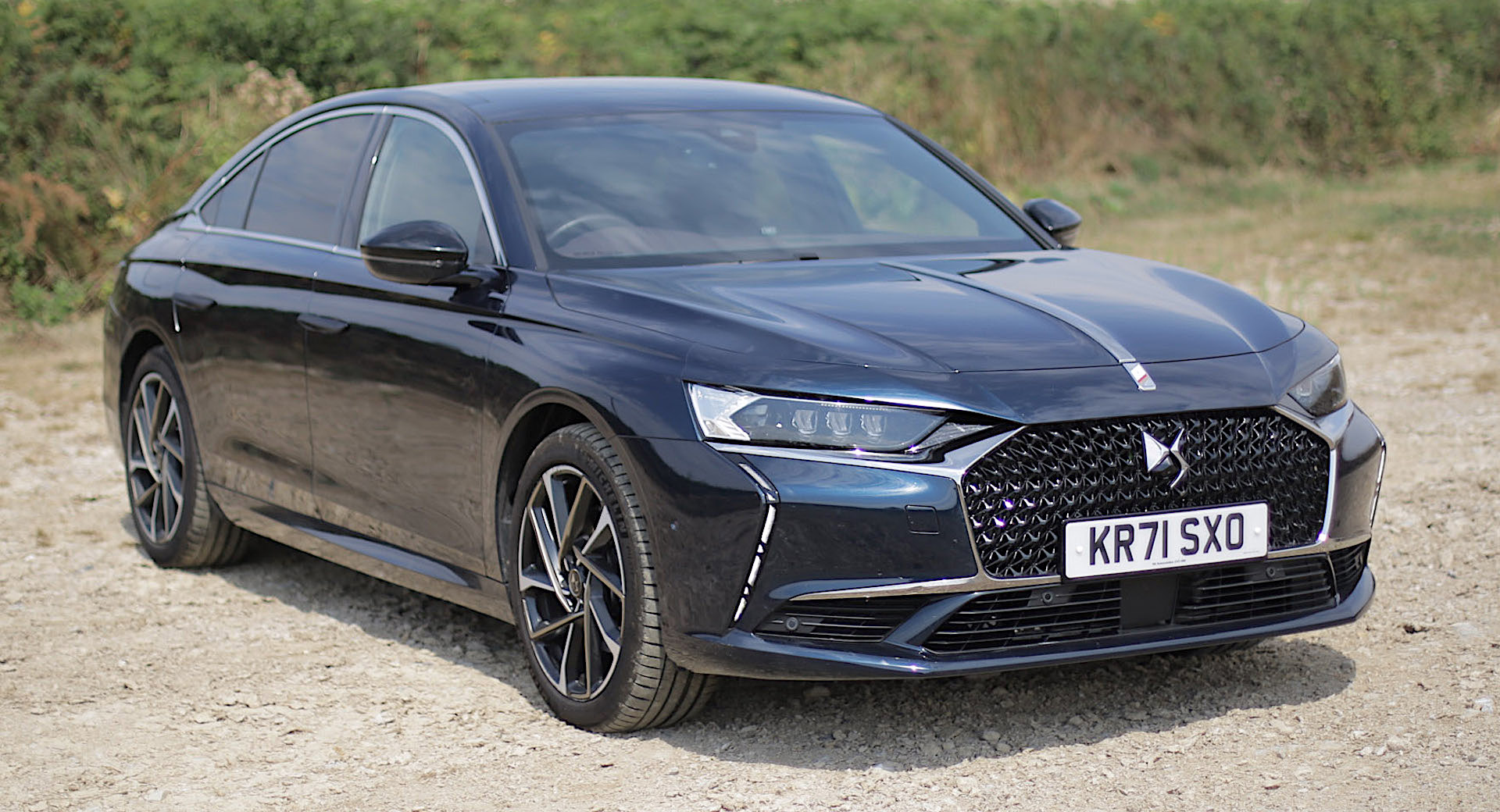 The BMW 5-Series, Audi A6 and Mercedes E-Class have, between them, a complete stranglehold on the European large luxury car market, their combined sales accounting for 71 percent of the segment in the first quarter of 2022.

The Lexus ES that tops the U.S chart is way down at 1.9 percent of market share in the European tables, and DS Automobiles’ DS 9 grabs just 0.4 percent of buyers. Only 410 DS 9s were registered across the whole continent in the first four months of the year, and fewer than 750 in China, its only other major market, and the place where what is shaping up to be a French folly is built. Are luxury drivers missing a trick, or is the DS 9 really that bad? 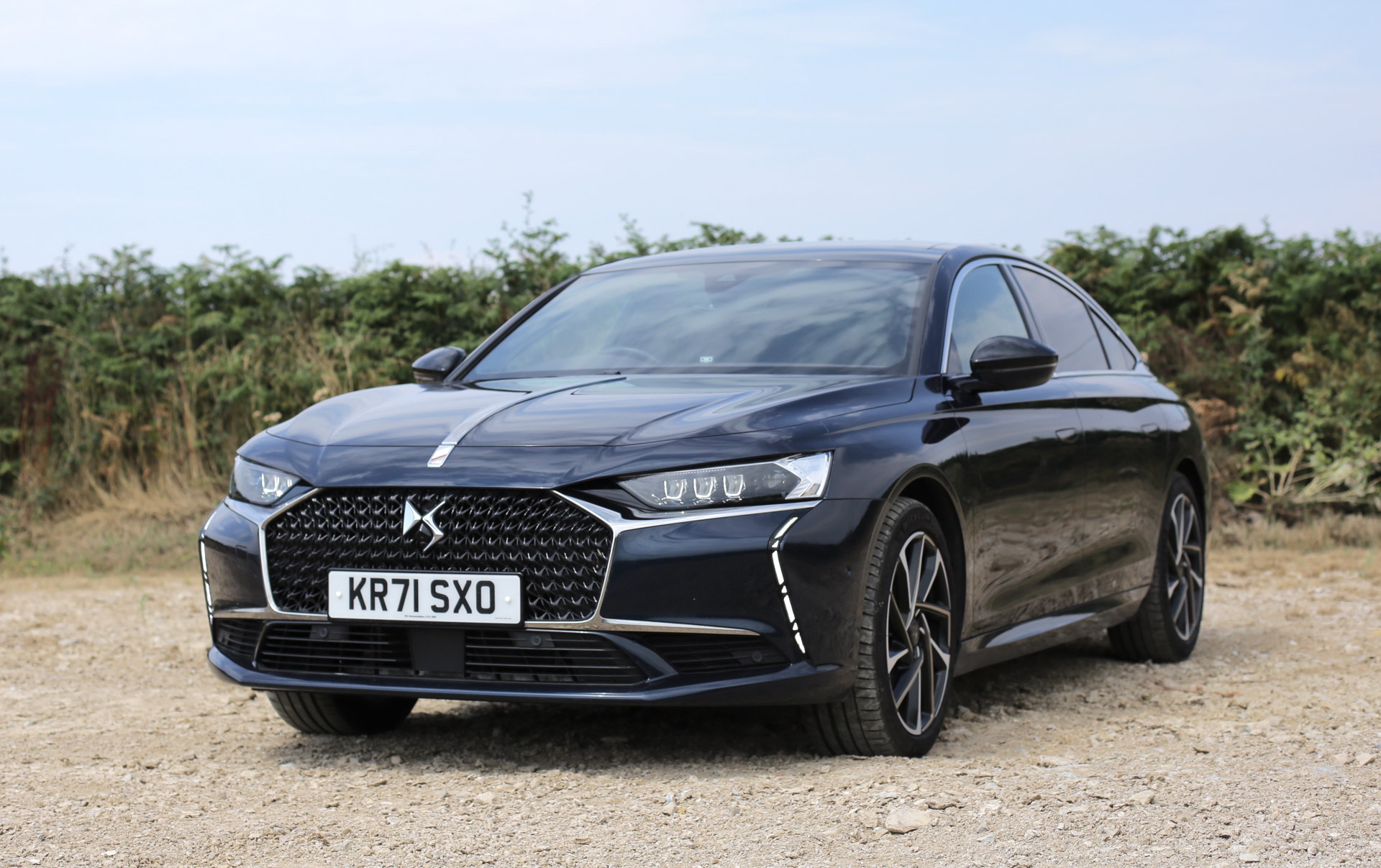 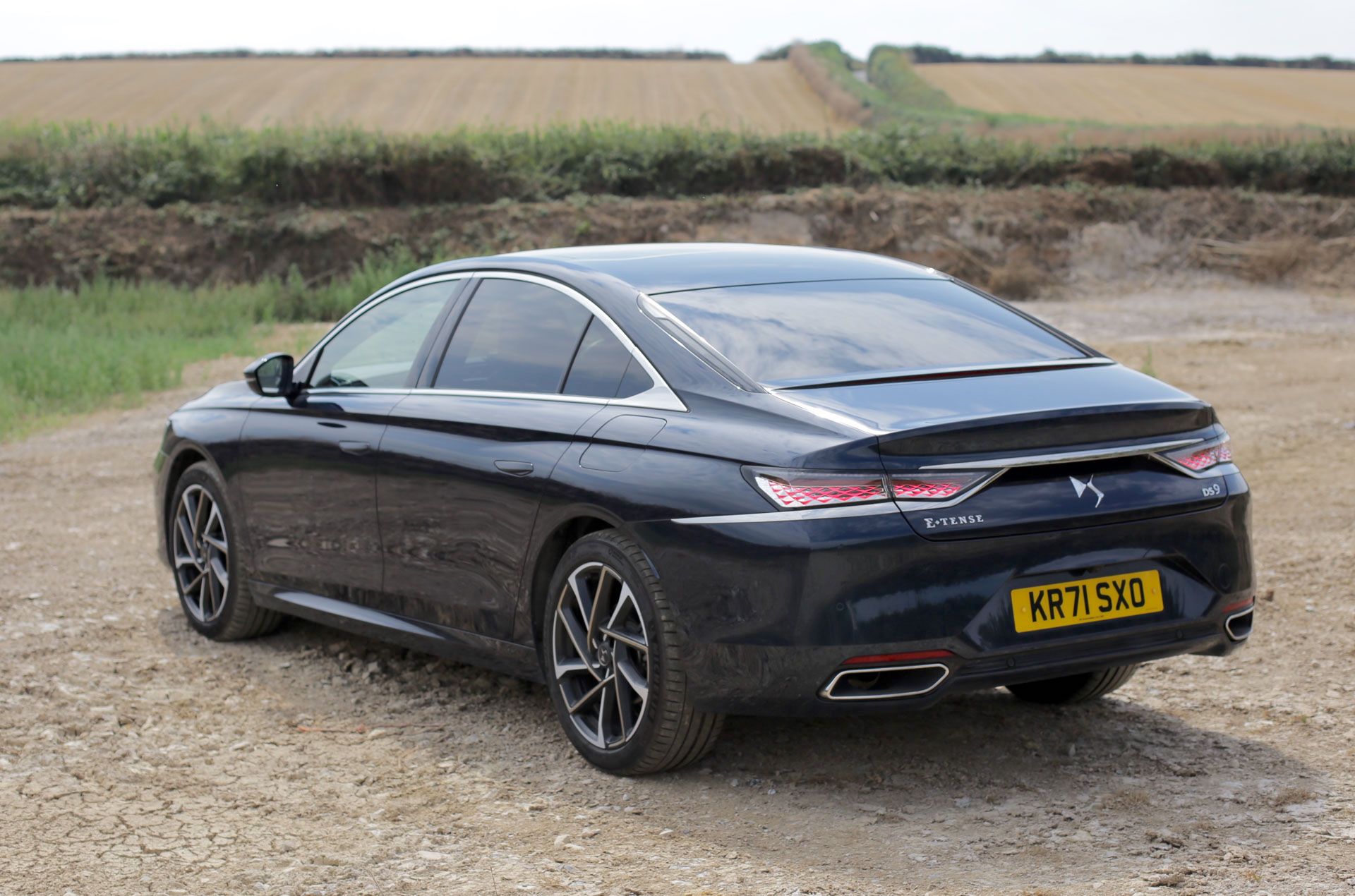 The DS 9 has received a bit of a kicking from European reviewers who criticized it for looking too boring. But in the metal it’s quite a handsome shape with a distinctive face thanks to the LED lights that revolve to greet you as you walk towards it, elegant flush-fit door handles, and a much sportier roofline than its German rivals. 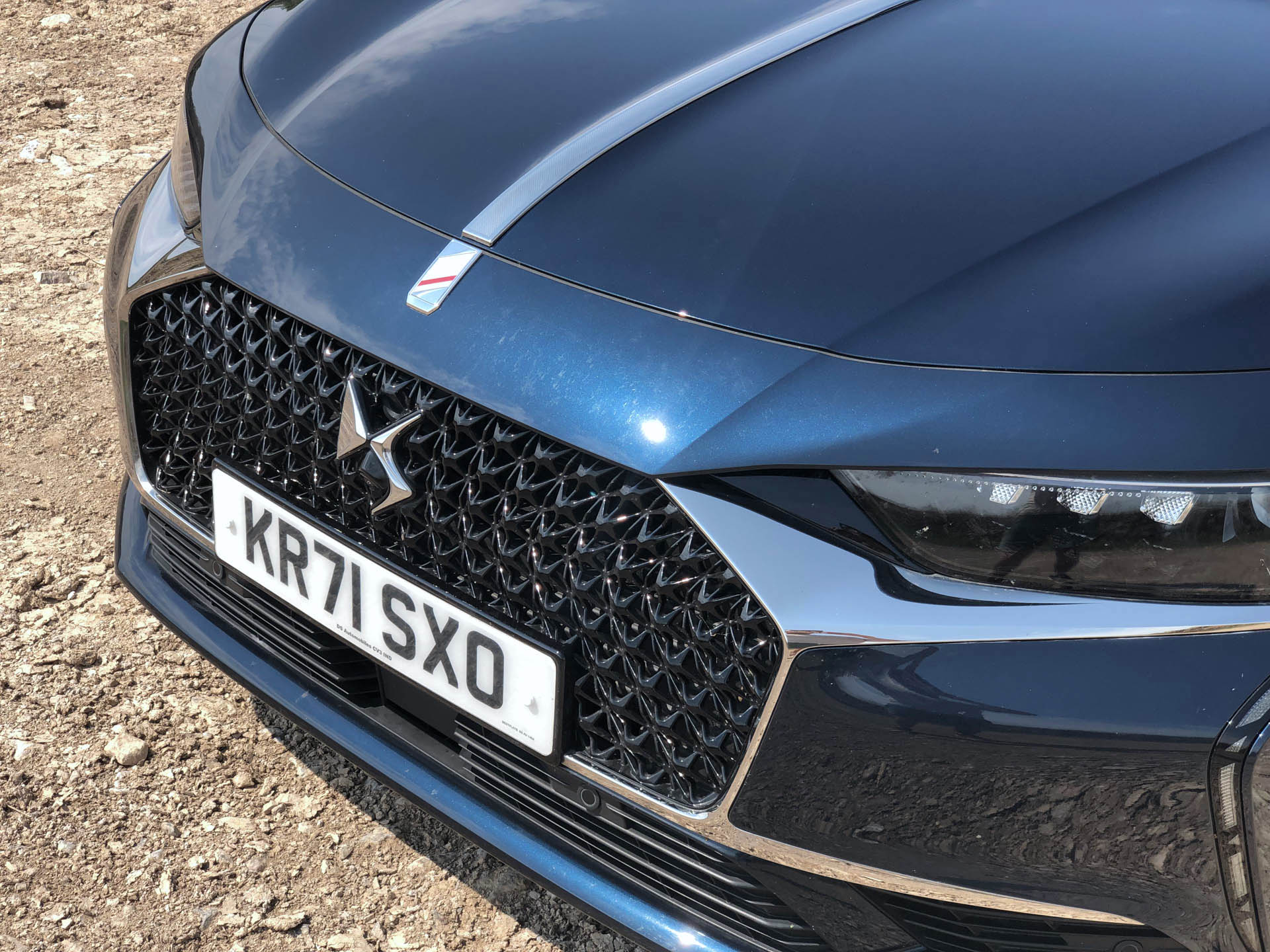 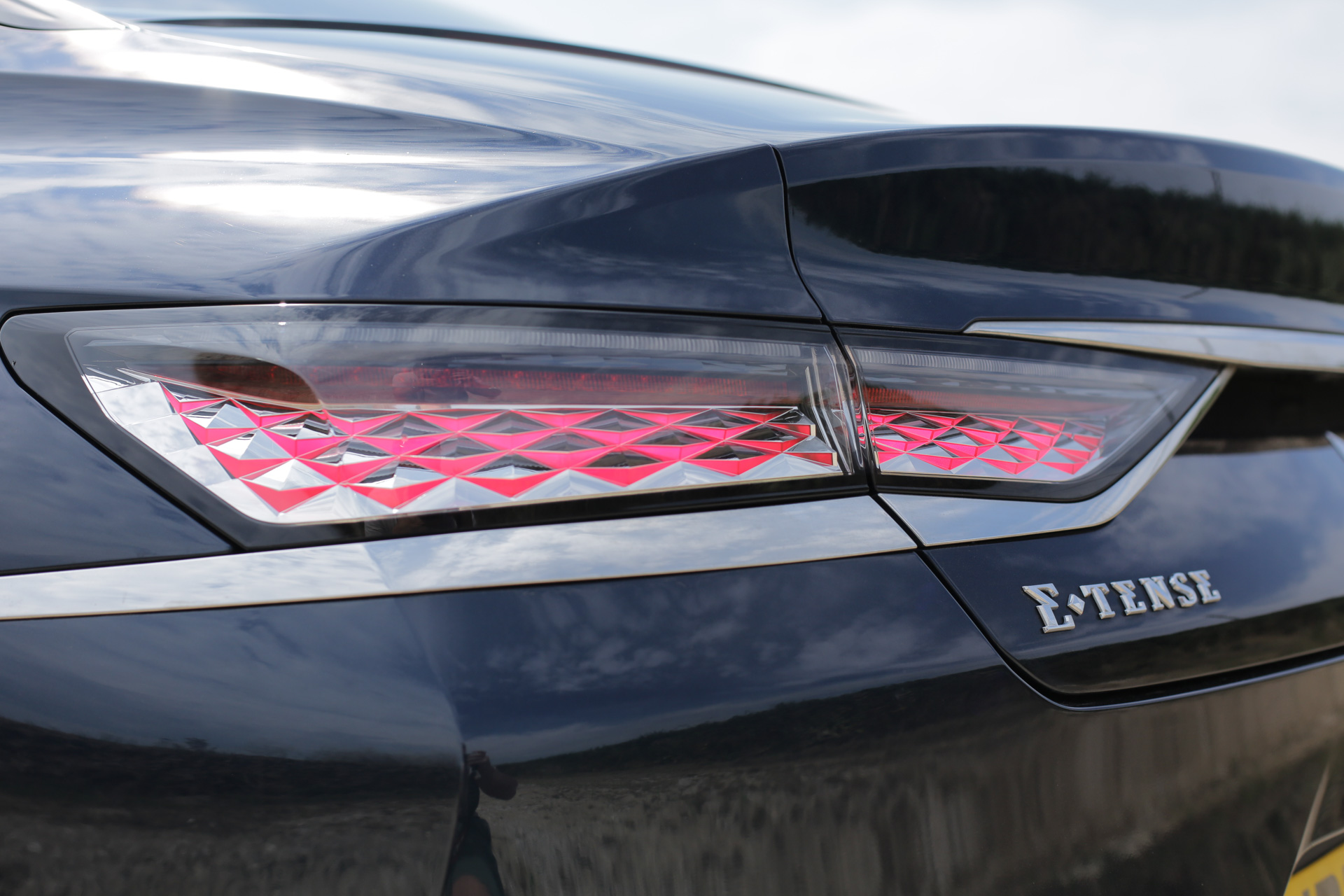 Where things become more controversial is in the detailing. You’ll either love or hate the central chrome strip that stretches from the base of the windshield to the front grille, and the strange snakeskin-like tail lamp design that appears to bleed red light from between the serpenty scales. There’s also a subtle nod to the original Citroen DS of 1955 in the small lights mounted at the top of each C-pillar.

Size-wise, it comes up slightly short of its German rivals for wheelbase, riding on a 2,895 mm (114-inch) platform it shares with the long-wheelbase Chinese-market Peugeot 508L, but matching the A6 and 5-Series for overall footprint with a toe-to-tail measurement of just under 5 meters (197-inches). 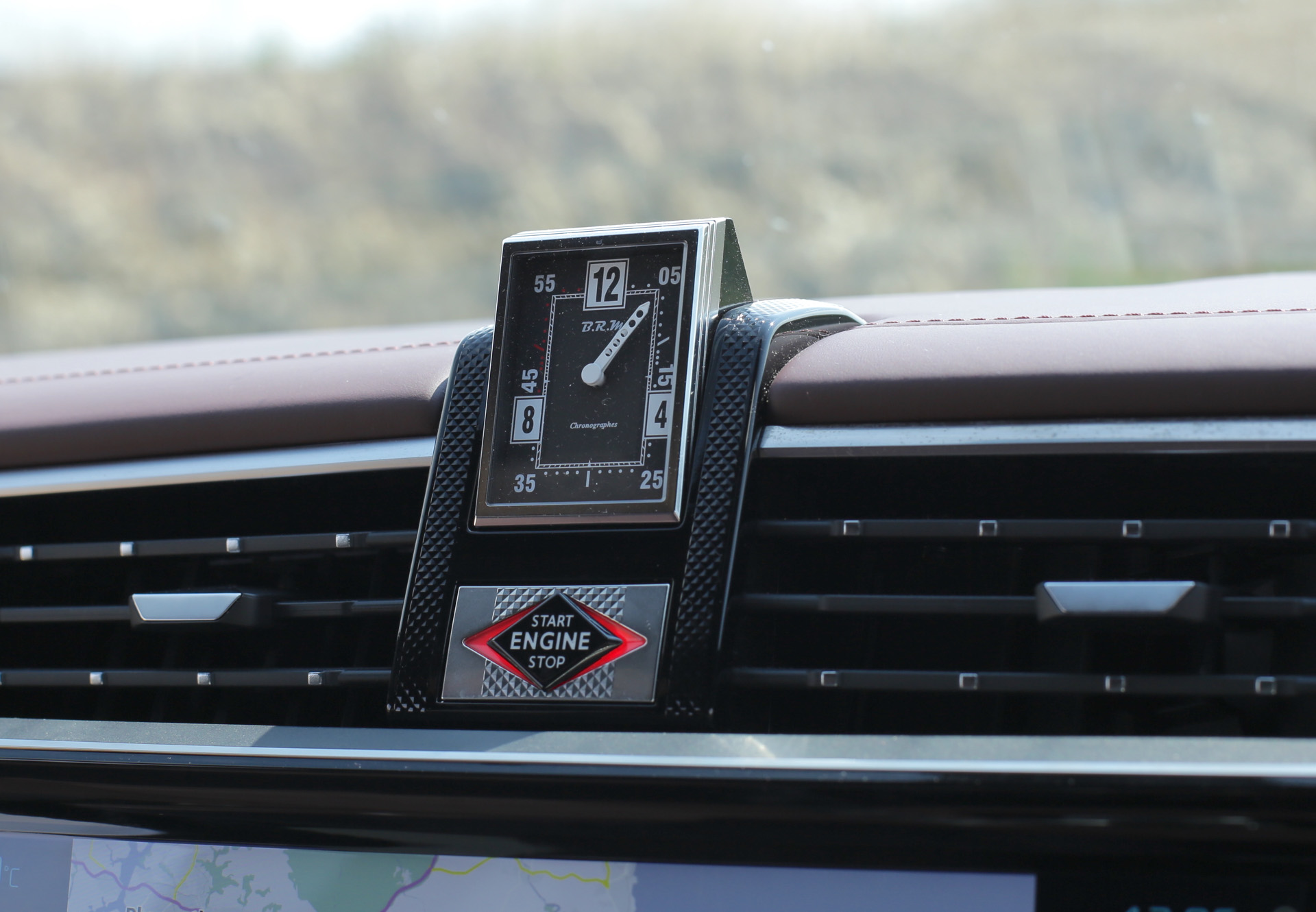 If you like the 9’s slightly flamboyant exterior detailing, you’ll probably love the interior design, which we’ve seen before on other DS vehicles, including the DS 7 SUV. A revolving BRM clock sits at the top of the dash, below which lies a wide 12.3-inch touchscreen that houses almost all of the car’s controls, though there are at least a few hard keys at the base of the display. 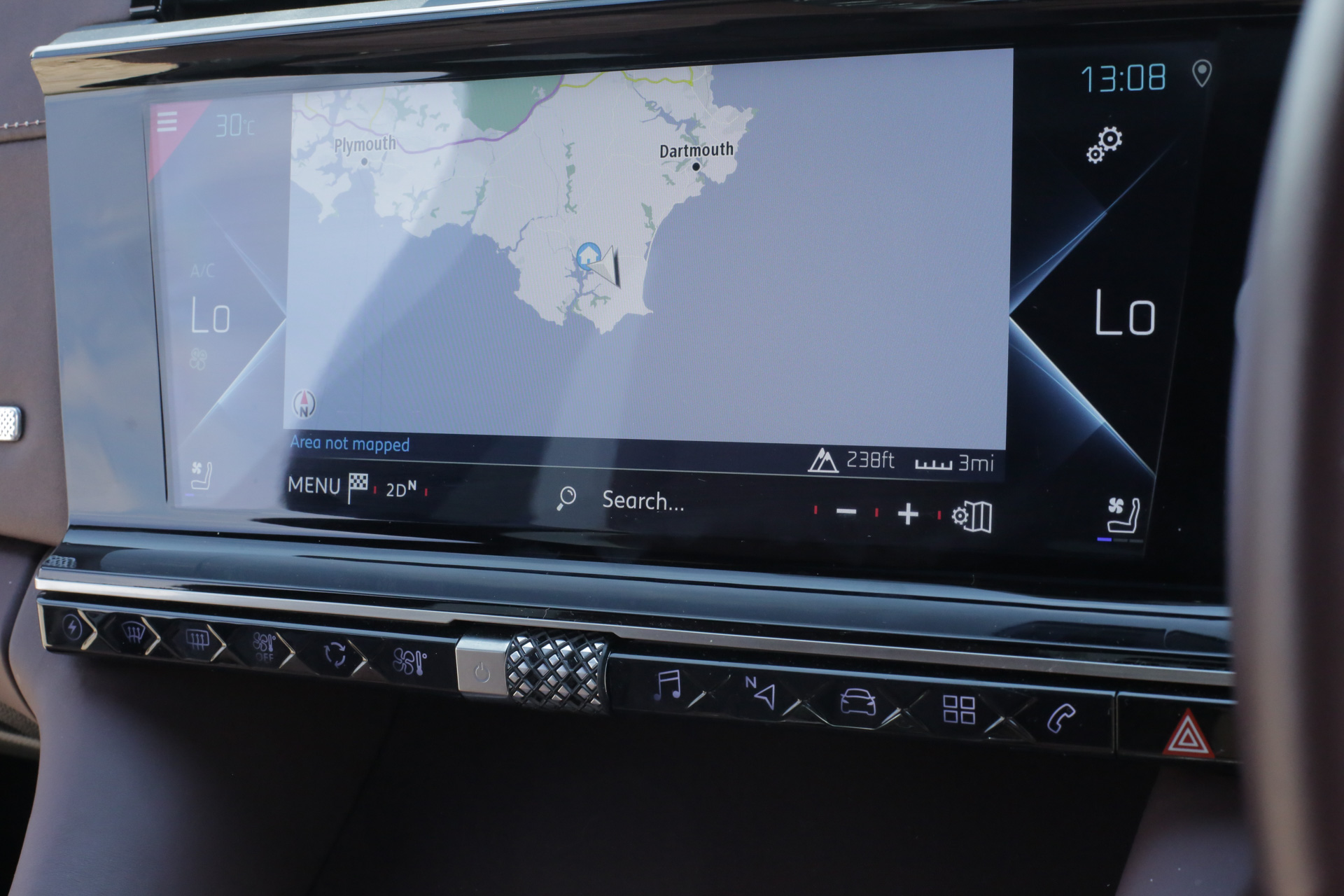 It’s a pretty slow system (as is the digital instrument cluster) and it can be frustrating having to dive into the screen to make simple changes to something like the fan speed when traditional rotary controls would work so much better. Dropping all four windows, as you might when returning to a hot car, is also a slow affair because the switches are mounted either side of the highs-set central tunnel. Looks cool, works badly. 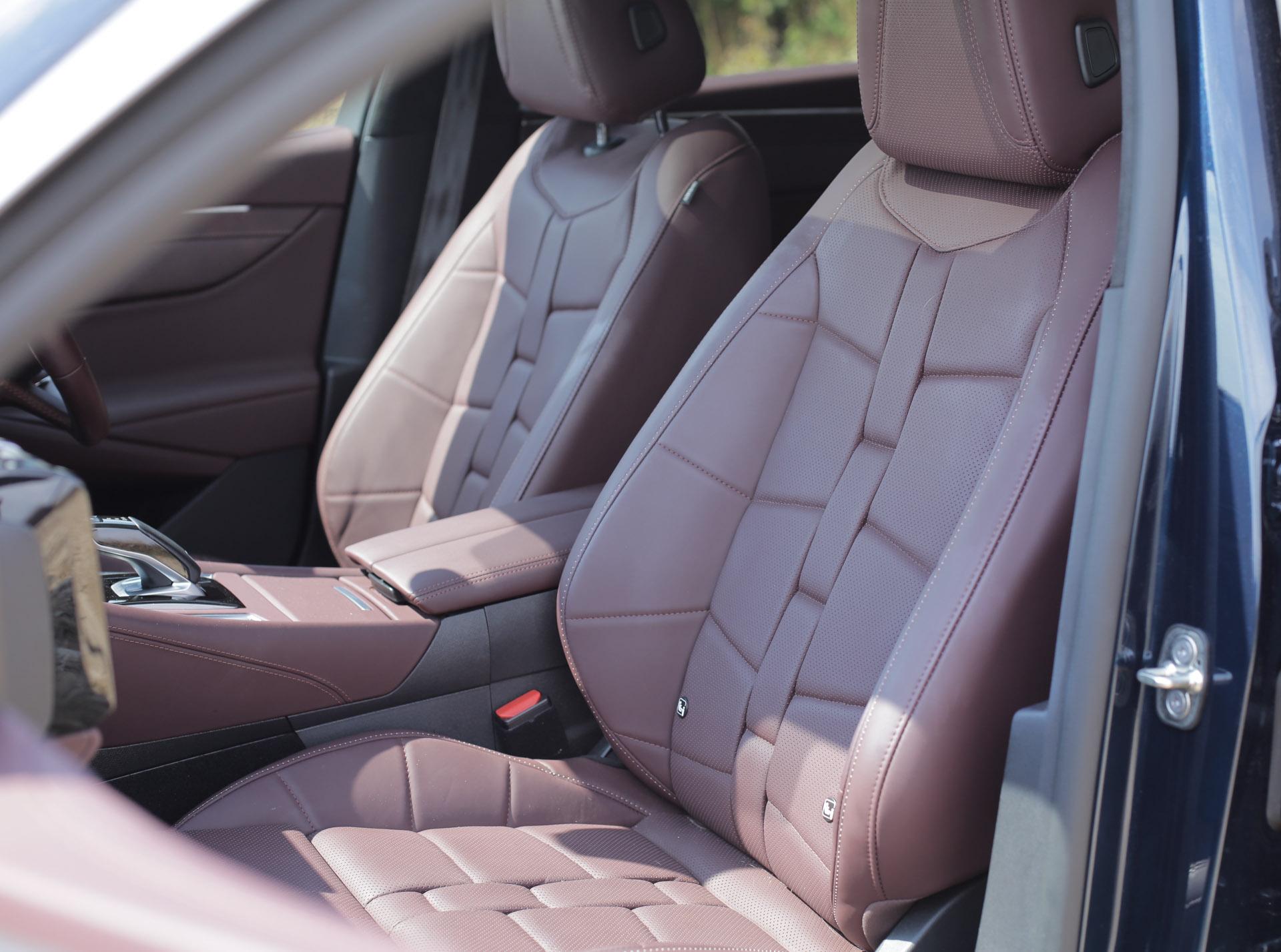 One bit of style that really does work though, is the chronograph strap-style leather upholstery that replaces the plain stock upholstery when your order the fancy Opera trim pack. In fact the overall ambience is good. The DS 9’s interior design might be overcomplicated, but it certainly looks and feels distinctive. 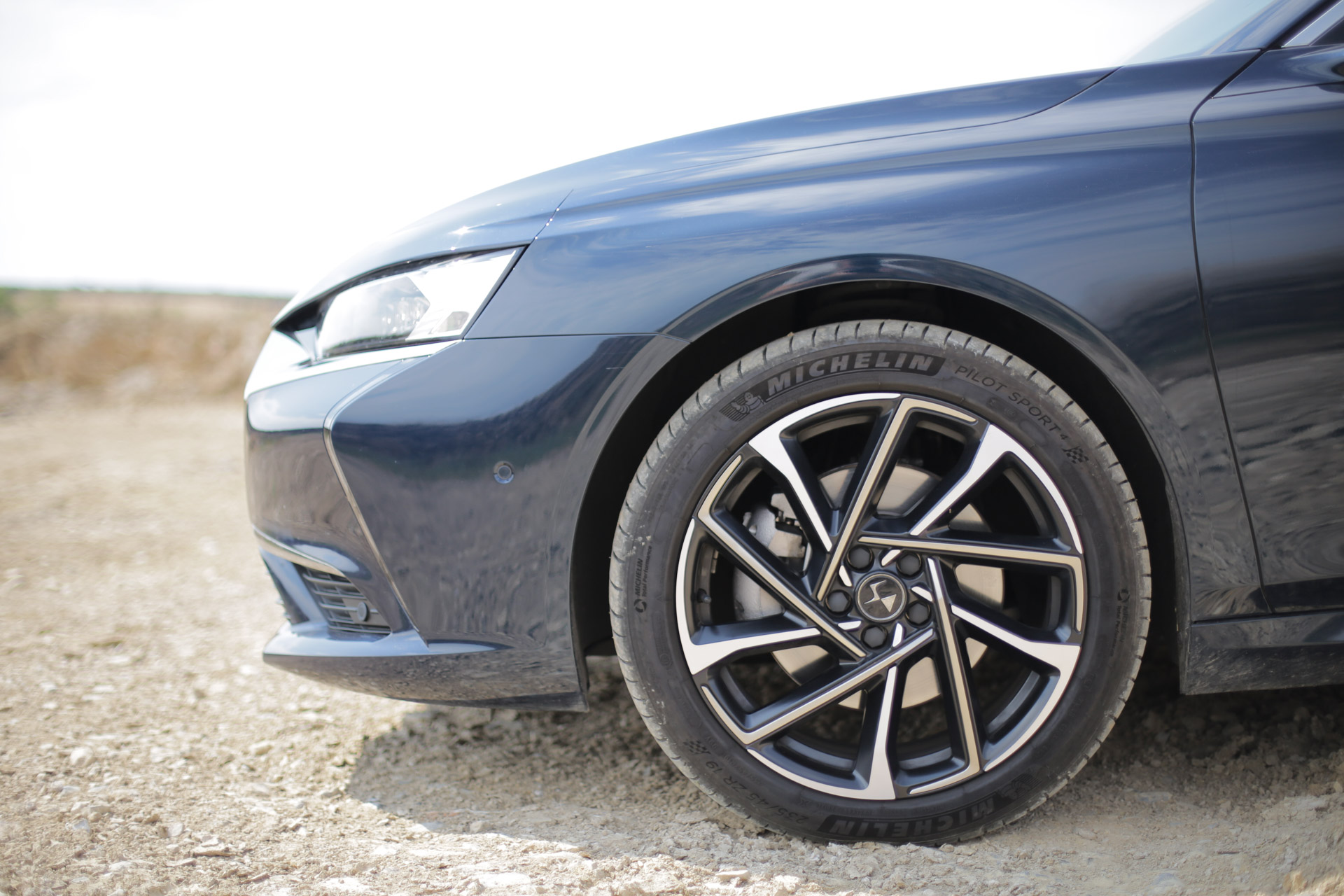 The DS 9’s range structure is incredibly simple, at least in the UK, where buyers get to decide between the base Performance Line+, which starts at £48,300 ($57,123) and comes standard with keyless entry, LED lights and 19-inch wheels, and the higher-spec Rivoli+ that costs £51,400 ($60,789) and adds wireless charging, managing leather-covered seats and adaptive suspension that reads the road ahead of it, a trick Merc pioneered on the S-Class years ago. If you want the cool watch-strap interior and a generous covering of cow on the dashboard and door panels, the Opera interior costs another £3,000 ($3,548). 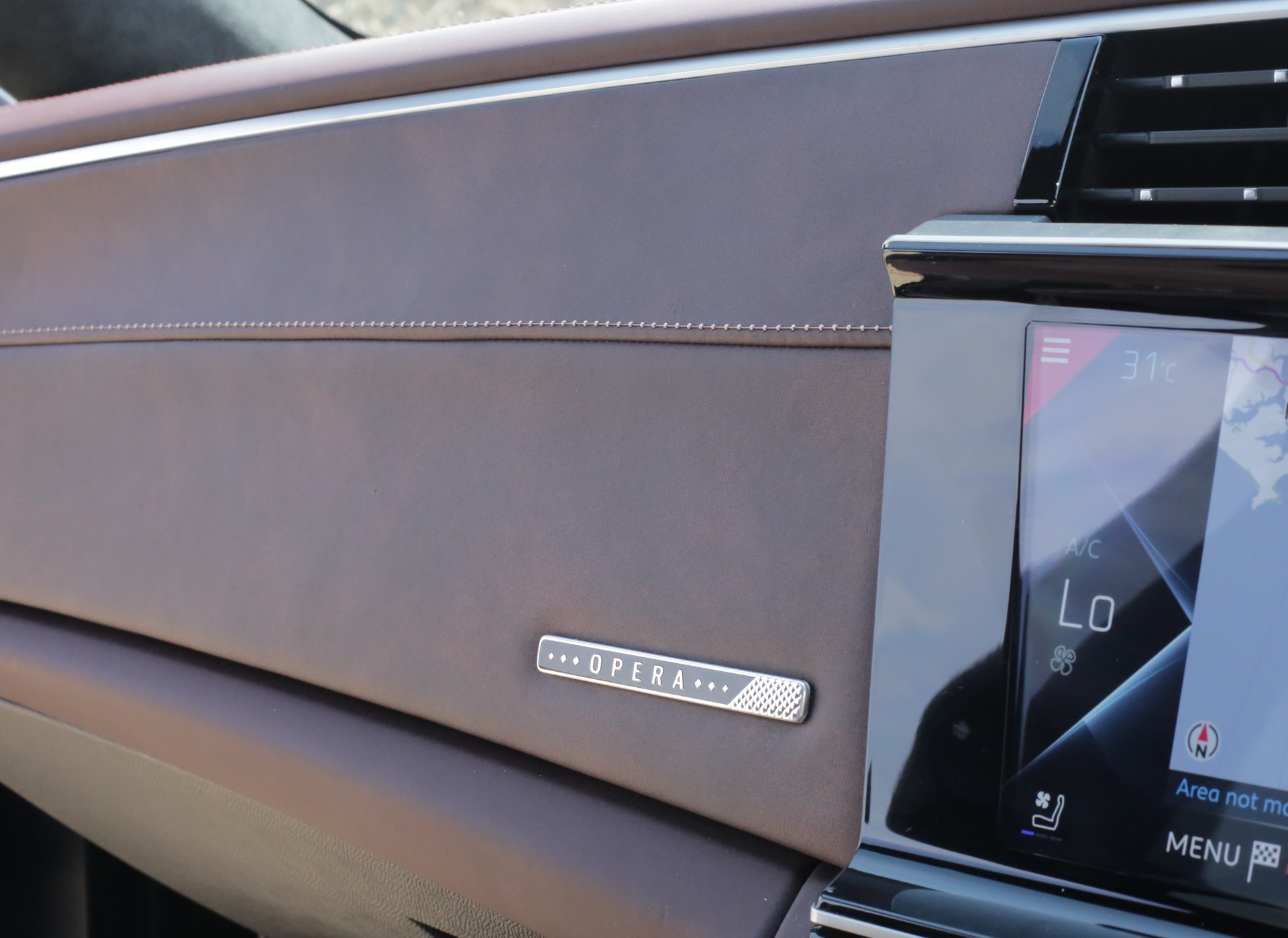 Only the Rivoli+ can be ordered with the Opera pack, but both models get the choice between E-Tense 250 and E-Tense 4×4 360 drivetrains. Both are plug-in hybrids powered by an electrically assisted version of the turbocharged 1.6-liter Peugeot-Citroen petrol engine hooked up to an eight-speed automatic transmission. But while the the front-wheel drive 250 gets a 197 hp (200 PS) engine and single electric motor for a 247 hp (250 PS) total, the 360’s 355 hp (360 PS) output comes courtesy of the same combustion engine and two electric motors. It’s the second of those motors, mounted on the back axle, that makes the 360 all-wheel drive.

Hope you’re not in a hurry 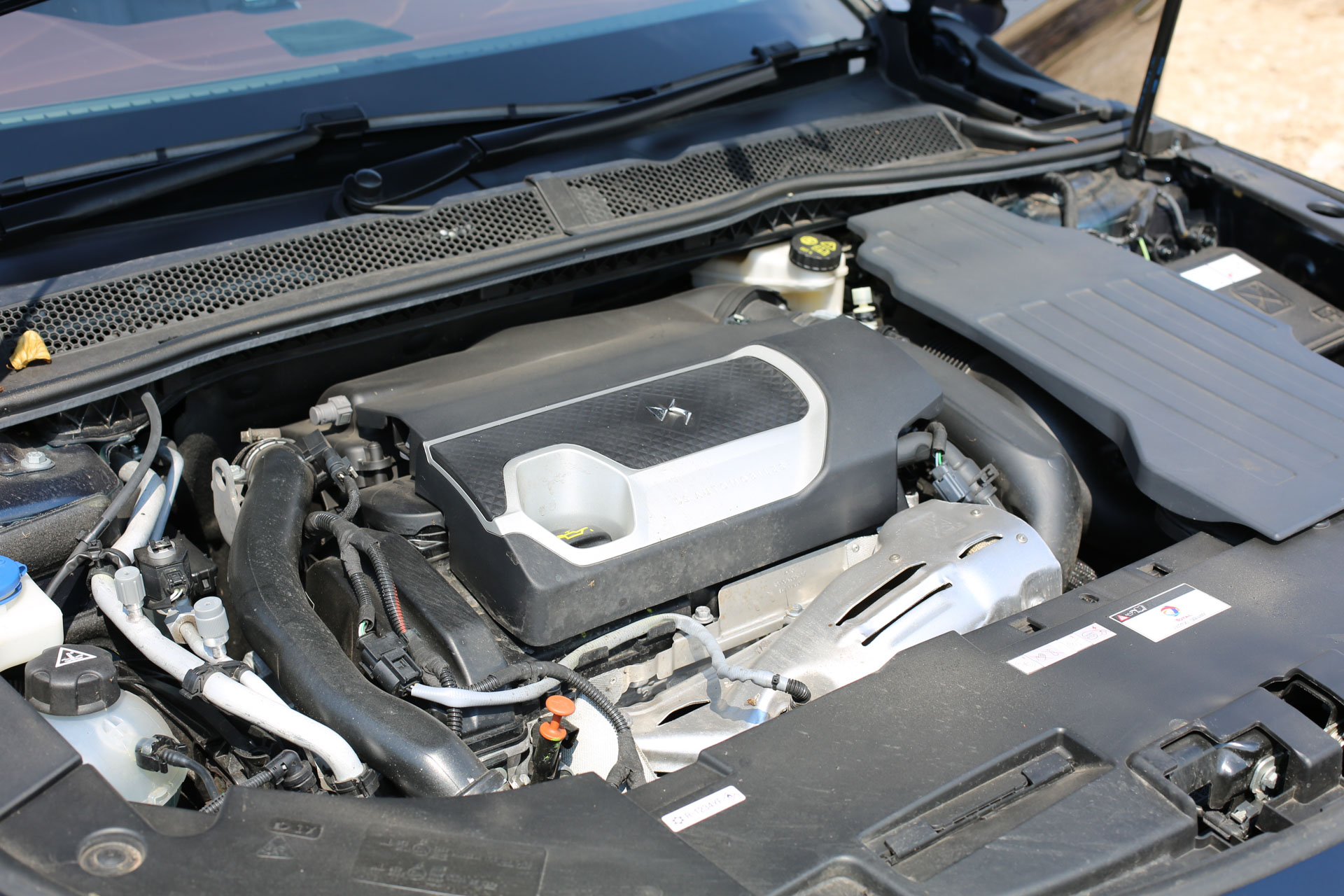 DS quotes a fairly healthy 5.6-second zero to 62 mph (100 km/h) time for the hot one, but a far more leisurely 8.1 seconds for the 250. We’re actually driving the older 225 that predates it, and which takes 8.3 seconds to do the same run, but the experience is broadly the same. It accelerates reasonably quickly once into its stride, but takes a while to get going, sounds slightly strained under load, and occasionally lurches clumsily into a downchange when you’d rather it rely on its torque. 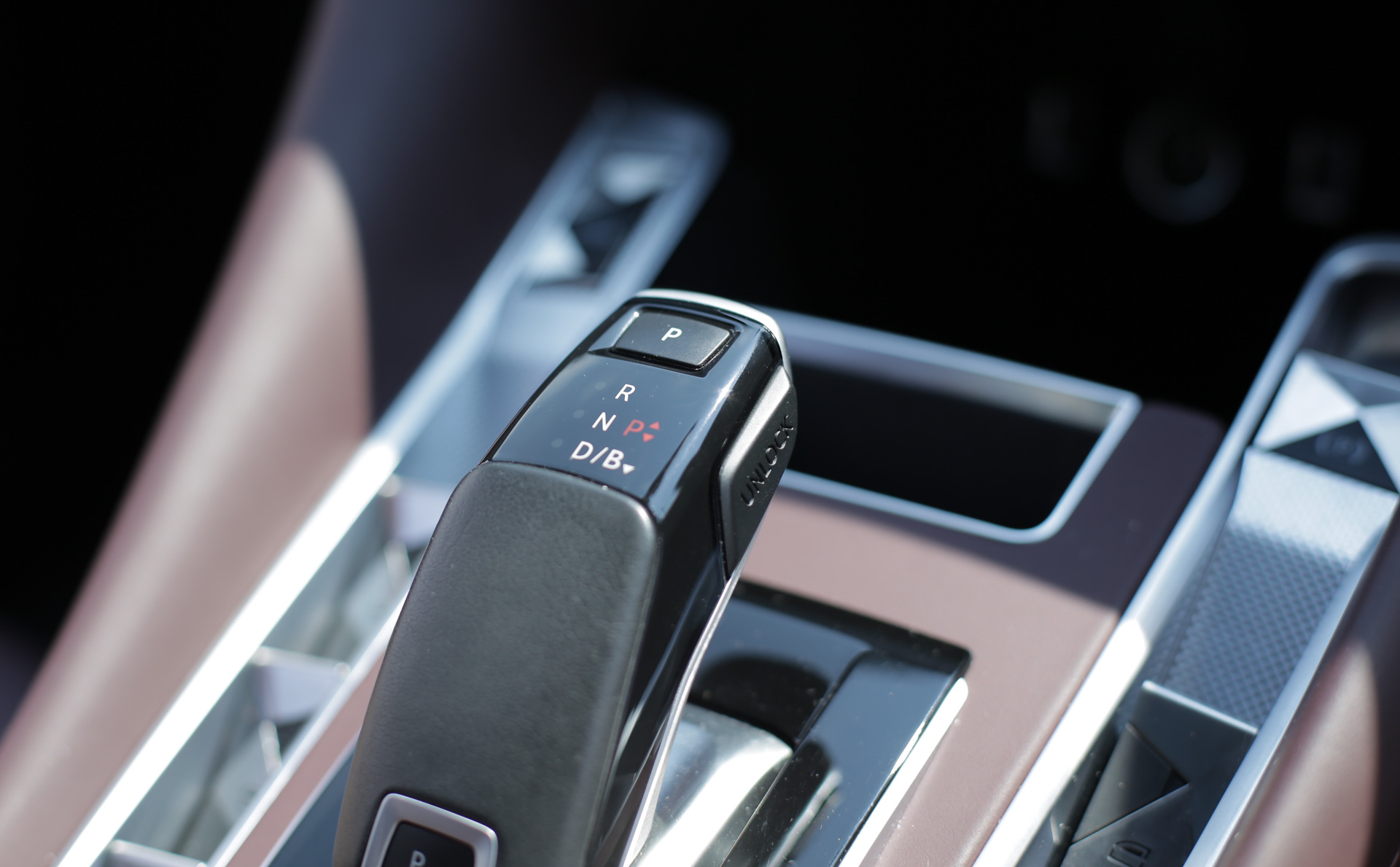 And you do want to rely on the torque, because DS is pitching the DS 9 as a luxury antidote to sport-obsessed German cars. Even with its fancy road-scanning suspension I don’t think the 9 rides as well as a 5-Series, whose double-wishbone suspension setup has an incredible ability to isolate you from road imperfections. But it’s certainly smooth at motorway speeds, and impressively quiet.

Throw the console switch into Dynamic mode to change the dampers up and it does corners too, but again, it has to give second best to that BMW for fun and agility, and what you gain in roll-resistance and additional steering heft, you lose in ride comfort. 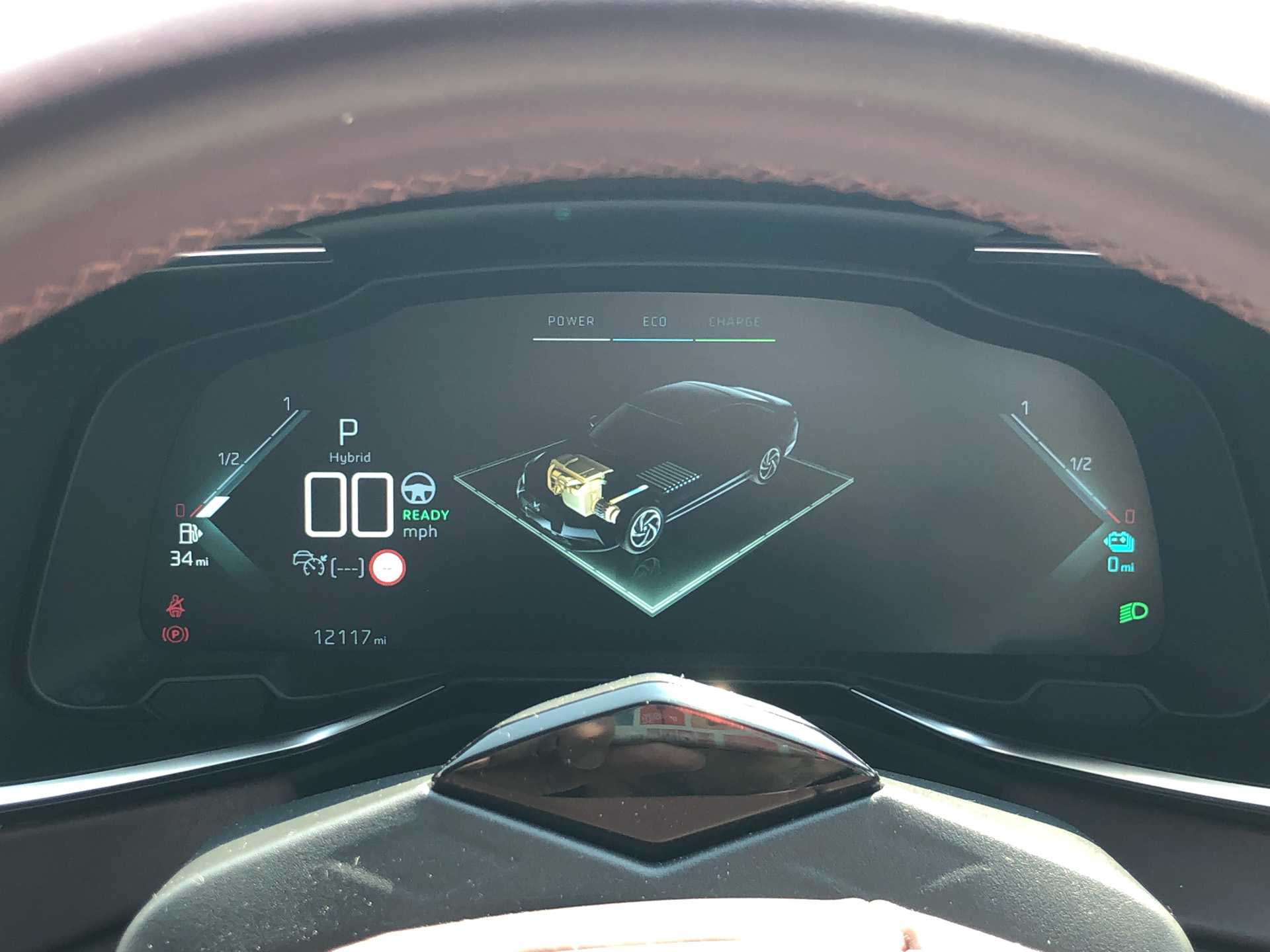 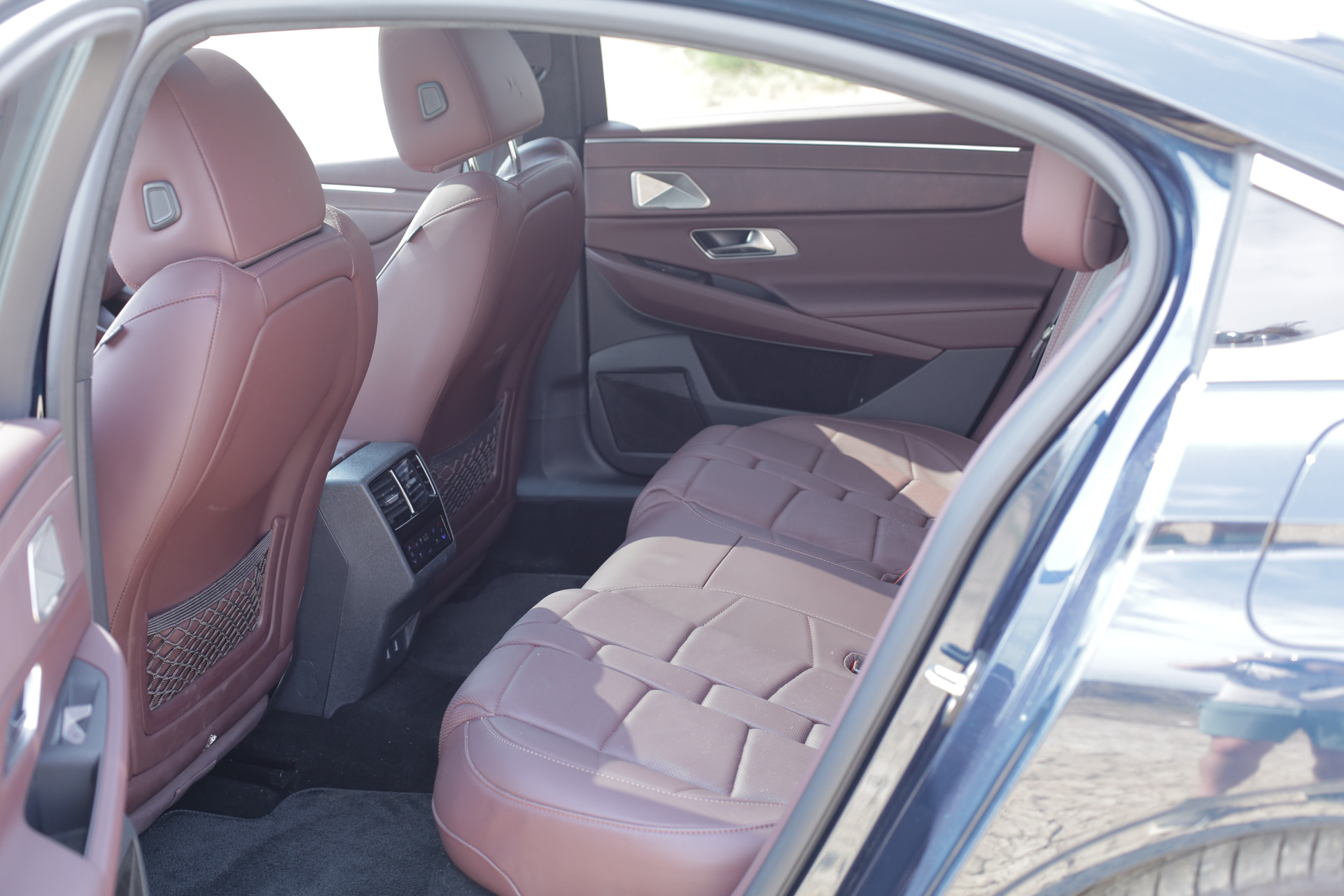 There’s plenty of room up front in the DS 9 but a slightly smaller wheelbase compared with the 5-Series means it gives away a little in rear seat space, while the sloping roofline sacrifices a little rear headroom. It’s still a roomy car, and the rear seats also recline, unless you have the massage seat option fitted. 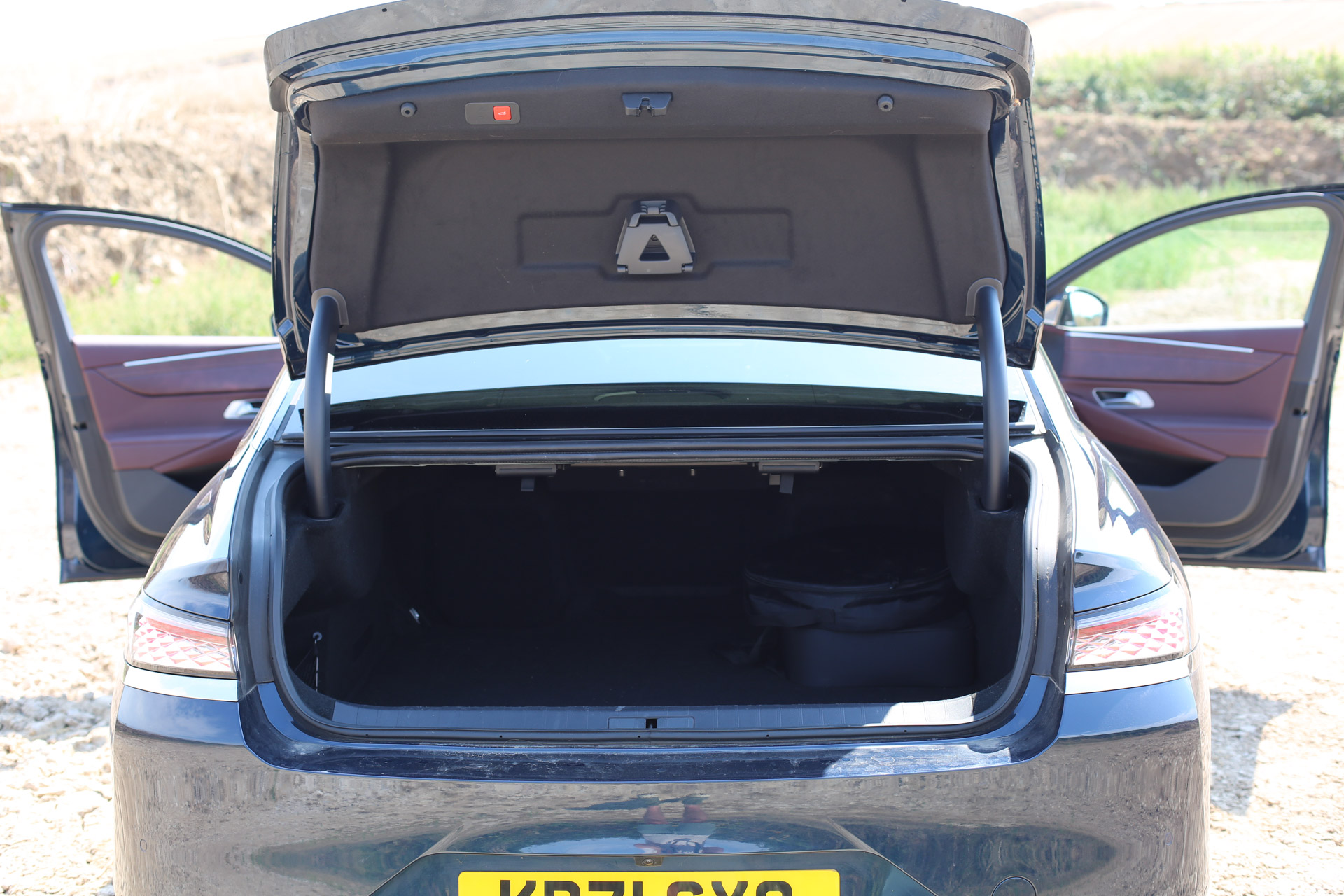 If BMW wins the interior space battle, DS fights back in the cargo war. It’s rated at 510 liters (18 cu-ft), which is 30 liters (0.7 cu-ft) less than a combustion 5-Series, but the hybrid version’s battery pack placement drops volume to just 410 liters (14.5 cu-ft). However our test DS 9 had the optional Focal Electra sound system, and the subwoofer on the rear shelf hangs annoyingly low, making it difficult to load what is already a shallow luggage bay. 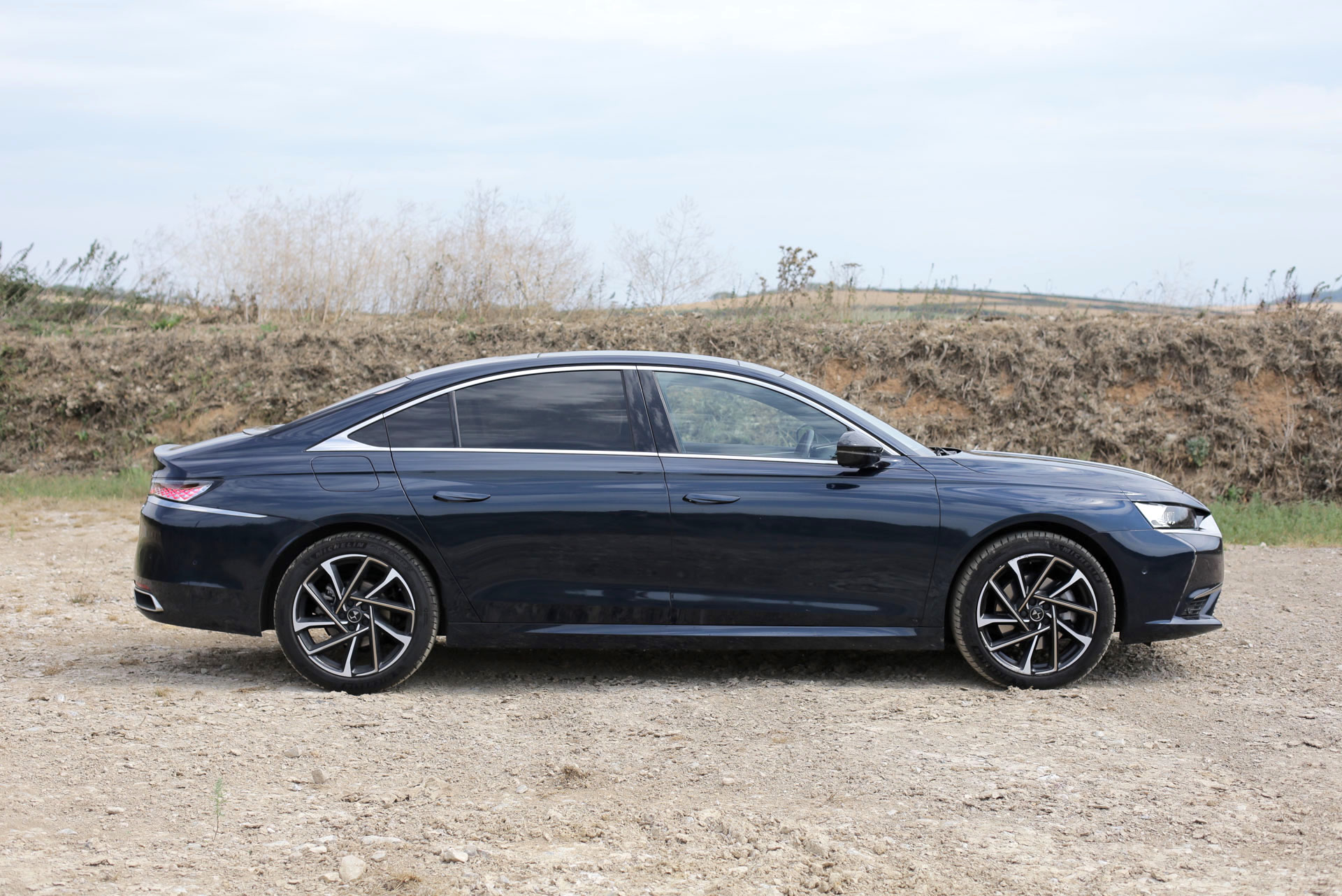 If you’re a long-time fan of sensible, well-executed German four-door luxury cars, you’re unlikely to be persuaded to change your habits by the DS 9. But if you’re the kind of buyer who finds the obvious German choices with their excellent infotainment systems a bit too, well, obvious and excellent, and were considering a Jaguar XF or Volvo S90, then maybe there’s enough here to grab your attention. 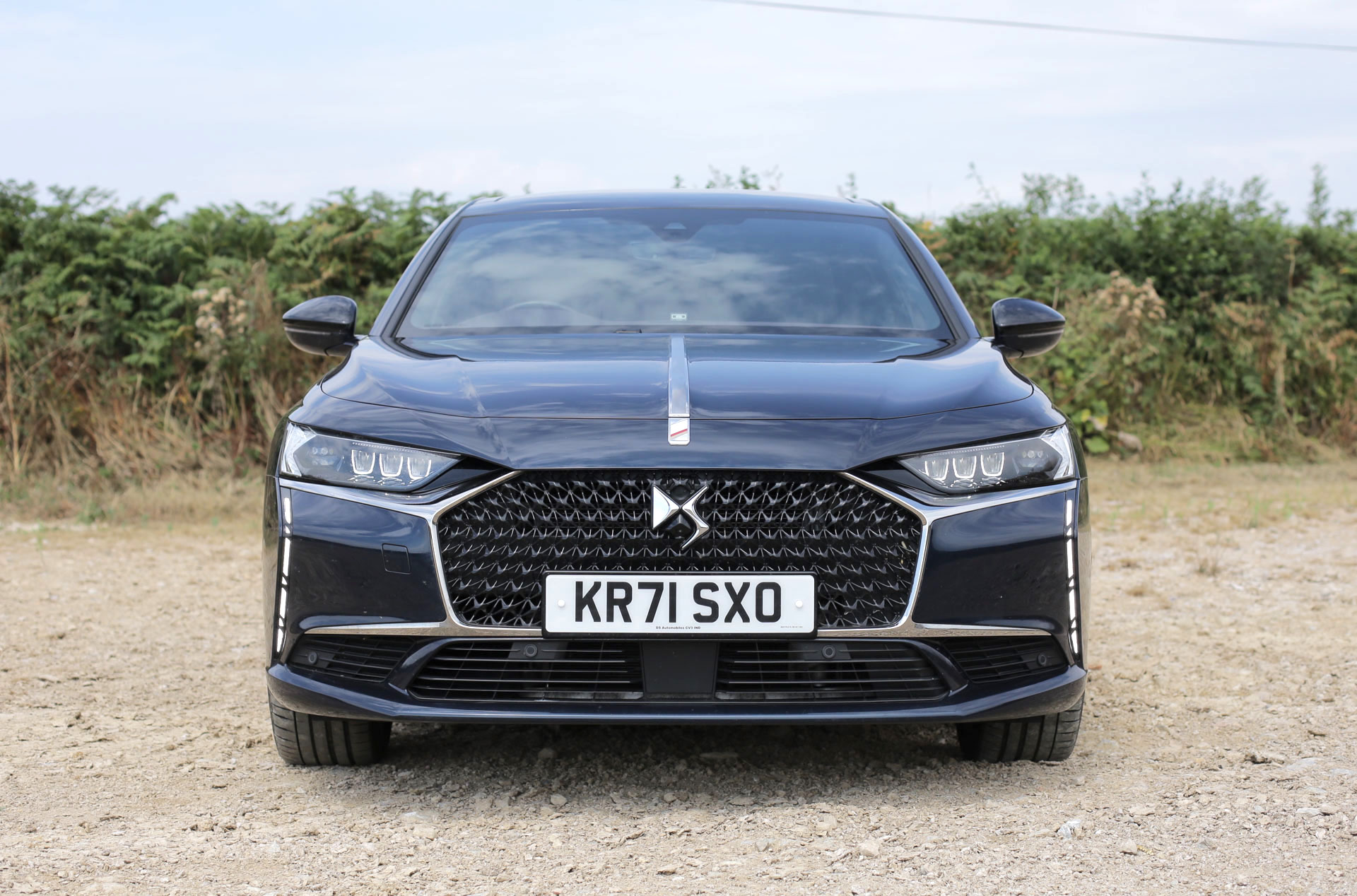 The DS 9 is well equipped, quiet, comfortable and while the base model is no supercar when it comes to acceleration, it’ll be almost as rare a sight. Maybe it’s a car that will grow on you over time. If it is, we’ll find out. I’m now running this one for Car Magazine’s long term test fleet and will be posting some updates on Carscoops that dig into what it’s like to live with a DS 9. Got anything you want to know about it? Drop a comment below.