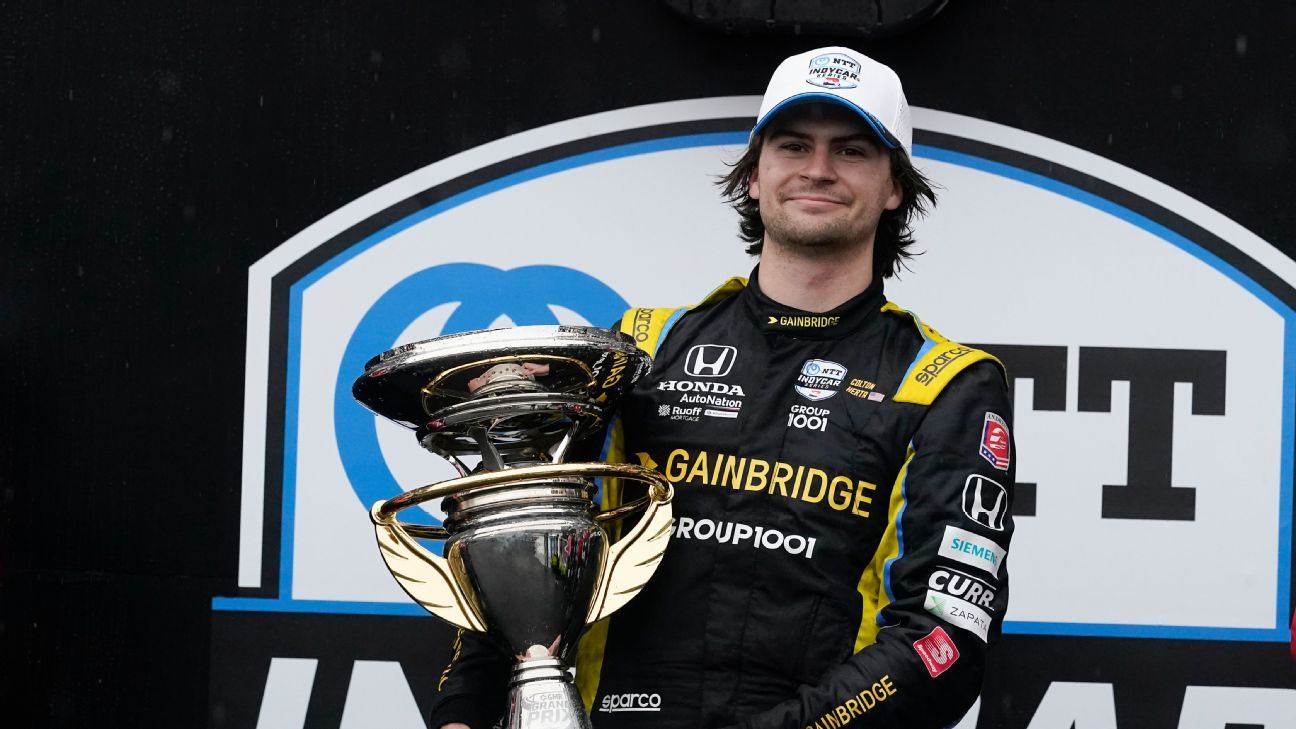 Just call it the Curious Case of Colton Herta.

This weekend marks the third-from-last event of the 2022 IndyCar season, and the final oval race of the year, on the egg-shaped World Wide Technology Raceway outside St. Louis. The real-time storyline on Saturday night will be the seven drivers separated by only 59 points as the championship trophy comes into view, especially the battle between the 40-something set, as leader Will Power fights to hold off summer resurgent Scott Dixon, who seeks a record-tying seventh title.

But the eyes of the Formula One world, as they have all season long, will be focused on the kid who is nearly half their age and sitting an insurmountable 135 points in arrears, ranked 10th after some midsummer struggles and more than likely to be mathematically eliminated from the title fight this weekend.

None of that matters. Not to the F1 crowd. Not to the seemingly ever-growing American F1 audience. And certainly not to the even more important group of American corporations seeking to have their logos on an F1 machine driven by an American racer.

Nearly all of the above have already anointed Herta as that driver. The Chosen One. He who will finally bring balance not to the Force, but to the forces of open-wheel racing.

“Every racer wants to drive in F1, but my goal as a kid was to be where I am right now, in IndyCar, so I also try hard to stay in the moment, where I am,” the 22-year-old explained earlier this summer. “But I am flattered, and who wouldn’t be?”

He is, after all, the youngest driver to win an IndyCar race, which he did three years ago at age 18. He’s won six more races since, many on tracks with serious Formula One pedigree, from Circuit of the Americas in Austin to Long Beach to the Indianapolis Motor Speedway road course.

He is young. He is sneaky funny. He comes from a racing bloodline, begat from father Bryan Herta, a member of the 1990s Champ Car “Rat Pack” with the likes of Helio Castroneves, Dario Franchitti and Tony Kanaan. He plays drums in a rock band. He even has awesome hair.

“There are guys who create buzz for the wrong reasons, and then there are the guys who create it for all the right reasons, and Colton is one of the right ones,” current Andretti Autosport teammate Alexander Rossi said of Herta in May. “And to be clear, this is not something that he has gone out and promoted. If anything, he has shied away from it. But that talk has happened anyway, and that’s a great indicator of how talented he really is.”

It’s why last month, when Herta turned laps in a 2021 McLaren in Portugal, so many people have rarely been so interested in a test session. It was the culmination of buzz that had been building since he signed a development deal with the team in March, the most-talked-about driver among McLaren boss Zak Brown’s endless 2022 shopping spree of young signees — which includes highly publicized pursuits of Alpine reserve driver Oscar Piastri and 2021 IndyCar champion Alex Palou of Chip Ganassi Racing.

It’s also why, as Herta strolled the paddock at May’s Miami Grand Prix, he created as much buzz as most of the drivers actually competing in the event, especially as boss Michael Andretti was visibly scrambling through that same garage, soliciting signatures to add F1 to Andretti Autosport’s lineup. Meanwhile, Andretti’s father, Mario, was proclaiming live on ESPN: “I want so much to see what Colton could do here.”

The elder Andretti is the only American-based racer to win an F1 world championship, as the kid whose family moved to Pennsylvania when he was a teenager returned to Europe to race as an adult. He is still the last American driver to stand atop an F1 podium, and that was 44 years ago. When Michael took his swing at the series in 1993, it was a disaster, but a common tale for stateside racers. After only one season, seven points scored and a feud with McLaren teammate Ayrton Senna, Andretti returned to IndyCar amid F1 chatter of, “See? Americans can’t cut it over here.”

No American-born racer has raced full time in F1 since 2007, when Herta was 7 years old. None have been behind an F1 wheel since Rossi turned part-time laps for since-shuttered Marussia in the Brazilian Grand Prix of Nov. 15, 2015, when 15-year-old Herta was running around England in the brand-new F4 series as a teammate to current McLaren F1 racer Lando Norris.

Norris recalled Herta’s F4 nickname of “Hooligan Herta” due to a tendency to steer into the grass because he was so aggressive in the corners. To the European set, that was taken as a dig at Herta’s abilities. To Herta, he knew it was nothing more than a funny story from back in the day.

Still, his role in this summer’s off-the-charts F1 silly-season drama, no matter how unwitting, is unavoidable. It doesn’t take much search engine work to find stories pointing toward Herta as the one who might push struggling Daniel Ricciardo out of his McLaren ride to be reunited with Norris.

On Thursday, an Autosport column titled “The inconvenient truth about F1’s ‘American driver’ dream” sent the motorsports social media world into a frenzied fistfight. Some said it was Herta’s time. Others said he needed to get in line behind another American, Williams signee and Ft. Lauderdale-born Logan Sargeant, who has worked his way up the traditional European Formula Series ladder. Some were quick to point out Herta’s disappointing 2022 IndyCar stats, numbers that would seemingly hinder his ability to land an F1 Super Licence. Others posted links to recordings of radio chatter between Colton in the car and his father, also his race strategist, and their notoriously chippy in-race arguments.

To the IndyCar crowd, that bloodline bickering has always been a source of entertainment. Last week, Josef Newgarden and Scott McLaughlin welcomed Herta to their popular “Bus Bros” YouTube show and immediately started in on his radio rankles with his father as “adorable” and evidence of the closeness of their relationship.

“That’s why we can talk to each other the way we do on the radio,” Herta explained to the Bros. “And obviously if he wasn’t a good strategist, that wouldn’t happen. But he’s a good strategist.”

He handles it all with the same low-key style. He has to. Such “controversies” are simply part of the gig, even a gig he doesn’t have yet.

“It is all flattering, and I suppose it is all a compliment to have my name in the middle of these things because ultimately, hopefully, it means someone thinks I’m a good racer,” Herta said following the Portugal test. “Again, I am always focused on what is next, but I am also always working to appreciate where I am now. If F1 never happens, or if it takes a long time for it to happen, I never want that to keep me from appreciating the opportunities I have now. I am young, and there is a lot that could happen yet in my life and career, wherever that is. Right now, it is in IndyCar.”

And IndyCar, the famously close community that it is, is having no problem appreciating the Chosen One while he is still choosing them. Just ask the Bus Bros, who jokingly asked Herta where he ranked among “the 180 drivers under contract right now” with Brown’s McLaren. As Herta navigated his answer, McLaughlin cut him off and spoke for the entire IndyCar paddock.