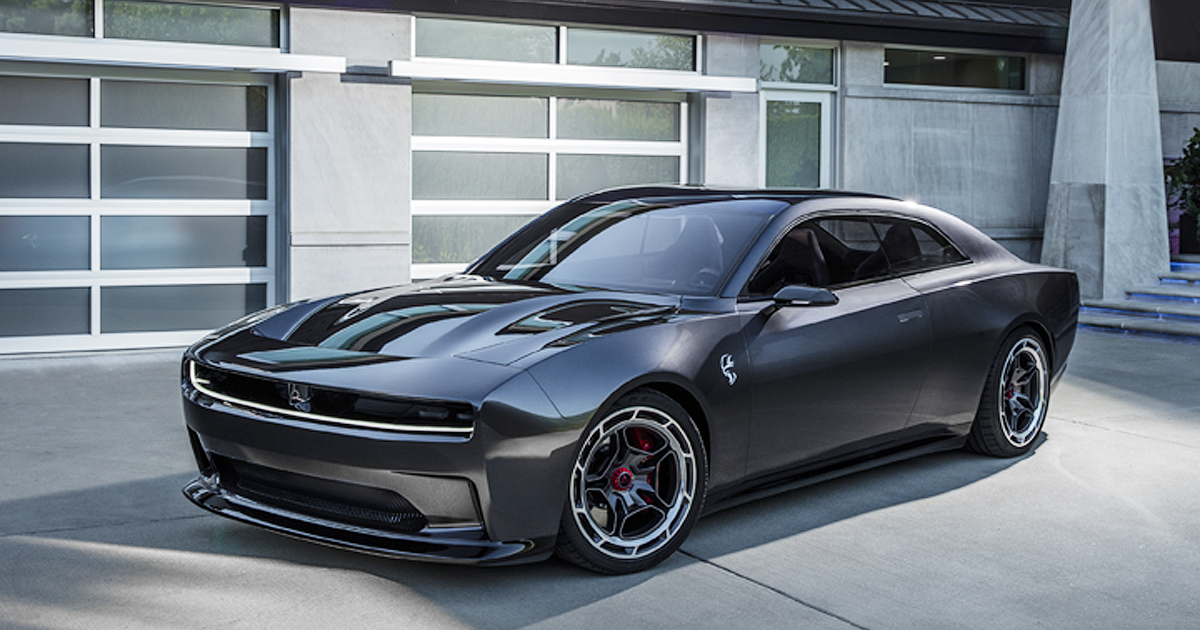 Dodge’s electric muscle car is on the way, and the brand wants the world to hear it coming.

Shunning the near-silence of traditional EVs, the Charger Daytona SRT Concept is outfitted with an industry-first exhaust system for an EV, the brand said. The sound, which can reach 126 decibels and is as loud as today’s Hellcat-powered vehicles, is sent through an amplifier and tuning chamber at the rear of the vehicle.

Dodge is calling this patent-pending feature the Fratzonic Chambered Exhaust.

Like a “traditional” and “proper” muscle car, the electric concept has an eRupt multi-speed transmission setup with electro-mechanical shifting, Dodge CEO Tim Kuniskis said. The PowerShot push-to-pass feature, like that of the upcoming Hornet R/T plug-in hybrid crossover, gives drivers a temporary burst of acceleration.

The concept debuted Wednesday, the final day of product announcements during Dodge’s Speed Week at M1 Concourse in suburban Detroit that is previewing the brand’s future.

The two-door Charger Daytona concept signals a new era for a brand known for its gasoline-powered performance, as production for the current-generation of the Challenger and Charger muscle cars ceases at the end of 2023.

Names such as Hemi, Hellcat and Redeye that defined Dodge muscle will give way to a new standard-bearer of speed, Banshee, when the Brotherhood of Muscles goes electric in 2024. Dodge said the concept’s 800V Banshee propulsion system will be the brand’s new pinnacle of performance. The concept sports Banshee fender badging.

Kuniskis said the car will launch with three power levels.

The design boasts the patent-pending R-Wing on the front end that allows air to flow through the front opening, enhancing downforce. Dodge says the R-Wing pays homage to the original Charger Daytona design. In 1970, the Charger Daytona was the first vehicle to break 200 mph on a NASCAR track.

The Fratzog logo that Dodge showed in a teaser for the EV concept last year appears as an illuminated badge on the grille. The Fratzog was used on Dodge muscle cars from 1962 through 1976.

While the concept has nods to the past, the designers sought to revolutionize the look of battery electric vehicles.

Dodge said the drivers can press a button on the steering wheel to select auto, sport, track and drag modes that instantly change the driving dynamics, display graphics, sound and interior lighting.

The 12.3-inch center screen is the largest featured in a Dodge and is angled nearly 10 degrees toward the driver. The company says the 16-inch instrument cluster is “curved, creating a cocooned, driver-focused feel.” The car, which has standard all-wheel drive, is a hatchback and has a panoramic glass roof.

Kuniskis likened the industry’s shift to electric vehicles to the space race of the 20th century. Dodge is joining the fray with its own flair.

“Dodge is going to get lost if we’re trying to do the same thing as everybody else, so let’s go, let’s invent, let’s create, let’s do something different than [what] anybody else out there is doing,” Kuniskis said. “Let’s show them that electrification can still shock people.”