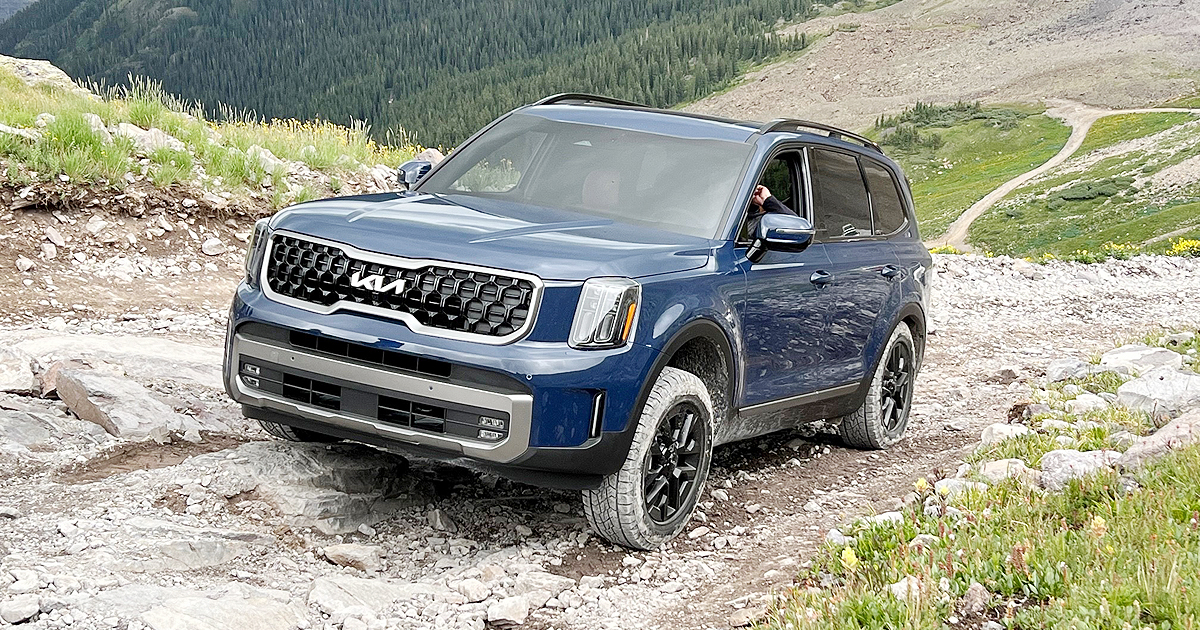 OURAY, Colo. — The Telluride has carved successful new paths for Kia since the crossover was launched in 2019.

The large ute draws a steady wave of new, younger and more affluent buyers to the brand. Average transaction prices have hovered above sticker since it went on sale.

It was the fifth-bestselling large crossover in the U.S. last year behind the Toyota Highlander, Ford Explorer, Chevrolet Traverse and Volkswagen Atlas; it moved ahead of the Traverse in the first half of this year to take the No. 3 spot. The Telluride ranked second among vehicles in the three-row crossover segment in J.D. Power’s latest survey of initial quality, behind the Highlander and ahead of the GMC Acadia, after placing first in 2021.

And it consistently scores among the most satisfying and appealing crossovers in its segment, again rated by owners, based on a separate J.D. Power survey.

But it is still missing some true off-road chops that cater to families and outdoor enthusiasts. So Kia is adding two new trim packages as part of a 2023 update.

The Telluride X-Line and X-Pro models — both with all-wheel drive — gain 0.4 inch of ground clearance for a total of 8.4 inches. The X-Line adds a new Tow mode, beefier roof rails, a redesigned grille and unique 20-inch wheels. The X-Pro takes that package and adds a 110-volt outlet in the cargo area, swaps the 20-inch wheels for 18-inch wheels with all-terrain tires, and gets an increased tow rating of 5,500 pounds, up from 5,000.

And hill-descent control is a new addition and standard on all Telluride trims, whether equipped with front-wheel drive or awd.

On the redesigned Kia Sportage, the new X-Pro accounts for more than 20 percent of model mix, well ahead of Kia’s 10 percent target, according to Russell Wagner, head of marketing for Kia America.

Wagner also said Kia aims to boost output of the 2023 Telluride about 20 percent as it and other automakers work through supply bottlenecks.

The Telluride name — pronounced with a short string of strong consonants, coincidentally, like Tahoe, Tundra, Bronco, Cherokee, Pilot, Yukon, Sequoia and Tundra — conjures up mighty and strong capability. But Kia is still largely a challenger brand in a segment where Jeep, Subaru and others have long forded.

In late July, creative agency David & Goliath, a unit of Innocean, assembled a cast of camera operators, directors and three 2023 Telluride X-Pros and trekked up the side of a peak in the Rocky Mountains that separates the Colorado towns of Ouray and Telluride. The mission: Demonstrate the Telluride’s new fortitude for commercial audiences in what Wagner calls “a great majestic setting.”

The setting was part alpine meadow, part end of the Earth, part crater, part mountain stream, with lots of loose and fixed rock, big and small, and the occasional tumbleweed.

Kia invited a small group of journalists to the summit to experience some of the first of two days of shooting. It was the first time the crossover had ever been filmed in or near Telluride, a onetime mining outpost where Butch Cassidy robbed his first bank, in 1889. Tellurium minerals were once mined throughout the region, and the streets of the rustic whistle-stop town are still lined with gold rush cabins.

Whereas Aspen, Colo., is the near exclusive enclave of Saudi sheikhs, Lamborghinis and Porsches, there is still a slice of Telluride that is authentically Western and bare, raw frontier — Ralph Lauren’s nearby working ranch and some five-star resorts aside.

The trail up and down saw waves of Jeep Wranglers, utility terrain vehicles and tourists in open-air mountain buggies. There wasn’t a Land Rover Defender or even a new Ford Bronco spotted.

It takes a small army to produce a 30-second commercial: producers, camera operators, stunt drivers, prop handlers, directors, a boom camera operator and driver, even two detailers to keep the three Tellurides spotless. Storyboards, cloud machines, a raft of camera lenses, coolers, truck-mounted boom cameras, sound experts — it all made it up the mountain.

The commercial is scheduled to debut during the Emmy Awards telecast scheduled for Sept. 12 on NBC.

Wagner and other Kia officials hint only that the ad will showcase the latest Telluride’s ability to reach new heights, elevations or limits.

Mother Nature even rewrote the script. As the group left the shoot and continued up to Imogene Pass, elevation 13,114 feet, a storm blew in and dropped waves of hail and sleet. Visibility at the summit dropped to around 100 feet. Lighting and mudslides forced the crew back down the mountain to safer terrain.

One tale has it that Telluride was named so because of the treacherous paths in and out of the remote town — “To Hell You Ride” — before the advent of the horseless carriage and later four-wheel drive.

Just as it navigated the ascent, the 2023 Telluride survived the hail, according to Ben Purcell, chief creative officer for David & Goliath. We’ll just have to wait till next month to count the high clouds and see how the Telluride’s screen role went.