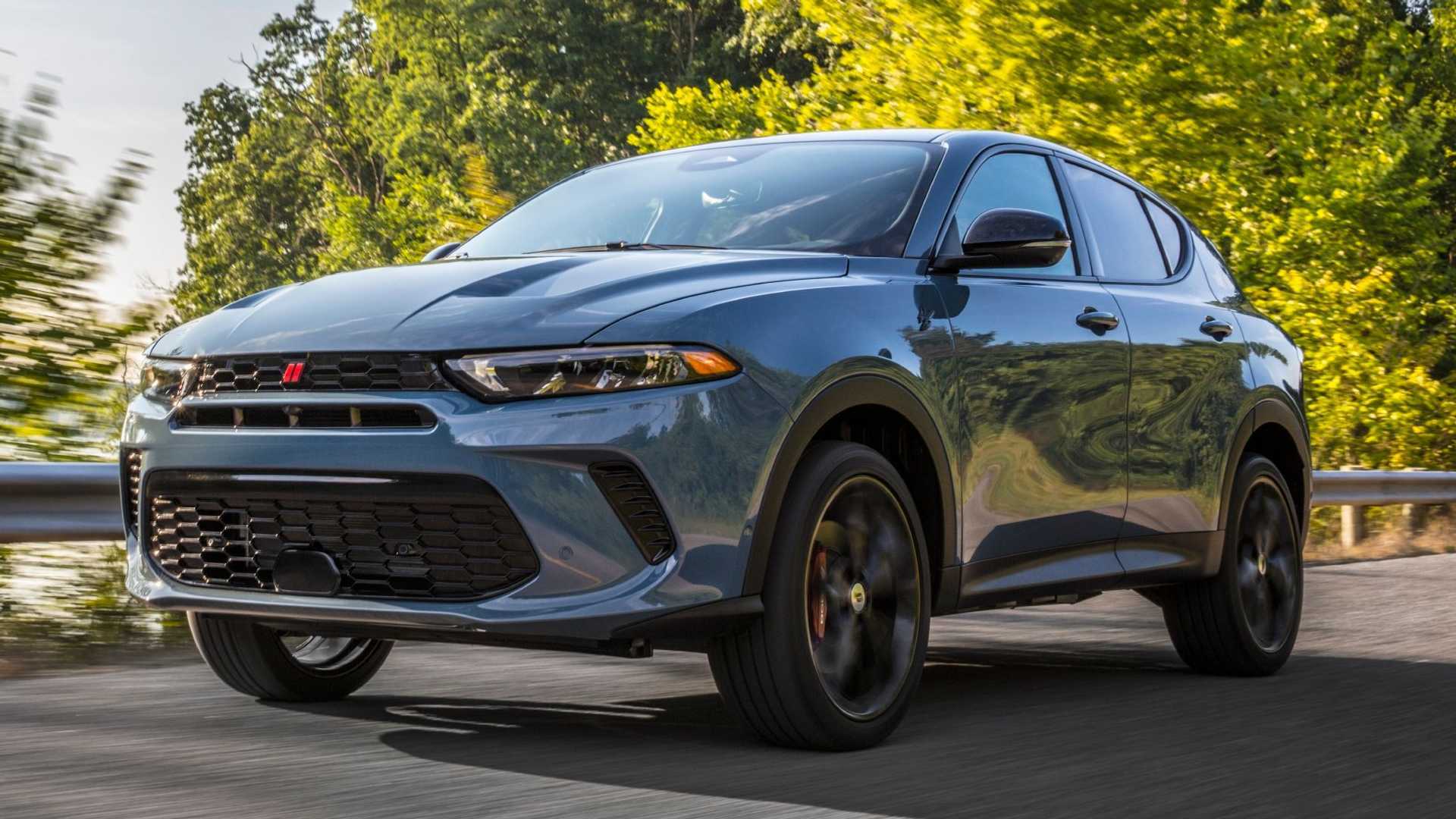 *Note: Lead image is not of the R/T PHEV variant. Those images have not been released by Stellantis at the time of publication.

Starting with the styling, which is not exactly a surprise given the leaked photos from earlier this year and the spy shots we’ve seen so far, the 2023 Hornet is clearly based on the Alfa Romeo Tonale. That said, it adopts distinctive Dodge DNA, including the hood with integrated heat extractors, “mail slot”-style grille opening sculpted into the fascia, and aggressive lamp graphics. On the R/T, the headlights combine LED reflectors and an illuminated DRL signature.

Seen from the side, the Hornet features matte black molded-in color lower cladding and valances for a muscular appearance, while the R/T model gets unique Abyss painted lower cladding and rear valance with integrated dual exhaust ports.

At the rear, the Dodge Hornet sports taillamps extending the width of the vehicle and featuring a lighted red signature, as well as an illuminated Dodge Rhombi logo in the center—a first on a Dodge production vehicle. The compact SUV also features a new exterior Hornet badge on the fender to celebrate the revival of the Hornet name, first used on the Hudson Hornet in the 1940s.

Inside, the 2023 Hornet features a driver-focused design with the center stack controls and display screens subtly tipped toward the driver, a flat-bottom steering wheel, a wrapped and stitched mid-bolster that extends through the instrument panel, red stitching accents set against the black interior and more.

*Note: Images released by Stellantis do not yet include the R/T plug-in hybrid version of the Hornet.

Moving on to the powertrain, the 2023 Dodge Hornet R/T is the brand’s first-ever electrified performance vehicle thanks to a plug-in hybrid powertrain that combines a 1.3-liter turbocharged all-aluminum GSE engine driving the front axle, a 90-kW (121-hp) electric induction motor powering the rear axle, a 15.5-kWh lithium-ion battery pack, a starter generator delivering torque to the engine belt and a six-speed automatic transmission.

The combined output is 285-plus horsepower and 383 pound-feet (518 Newton-meters) of torque, which is 13 horsepower more than the Tonale PHEV on which the Dodge Hornet R/T is based. Just like the Tonale PHEV, the all-electric range exceeds 30 miles (48 kilometers) and charging the battery takes 2.5 hours using a Level 2 charger.

The Hornet R/T also features a class-exclusive PowerShot feature that provides a boost of 25 horsepower and delivers instant torque for about 15 seconds. When engaged, PowerShot is said to shave one second off the normal 0-60 mph time of 6.1 seconds. The PHEV’s top speed is 128 mph (206 km/h).

As with the Alfa Romeo Tonale, the 2023 Dodge Hornet will be made in Italy at the Giambattista Vico Stellantis plant in Pomigliano d’Arco, Naples. The Hornet R/T PHEV will hit US showrooms in spring 2023, while the GT ICE model, powered by a 265-hp 2.0-liter turbo four gas engine, will arrive stateside in late 2022. While the GT will have a starting MSRP $29,995, pricing for the R/T PHEV hasn’t been announced yet.