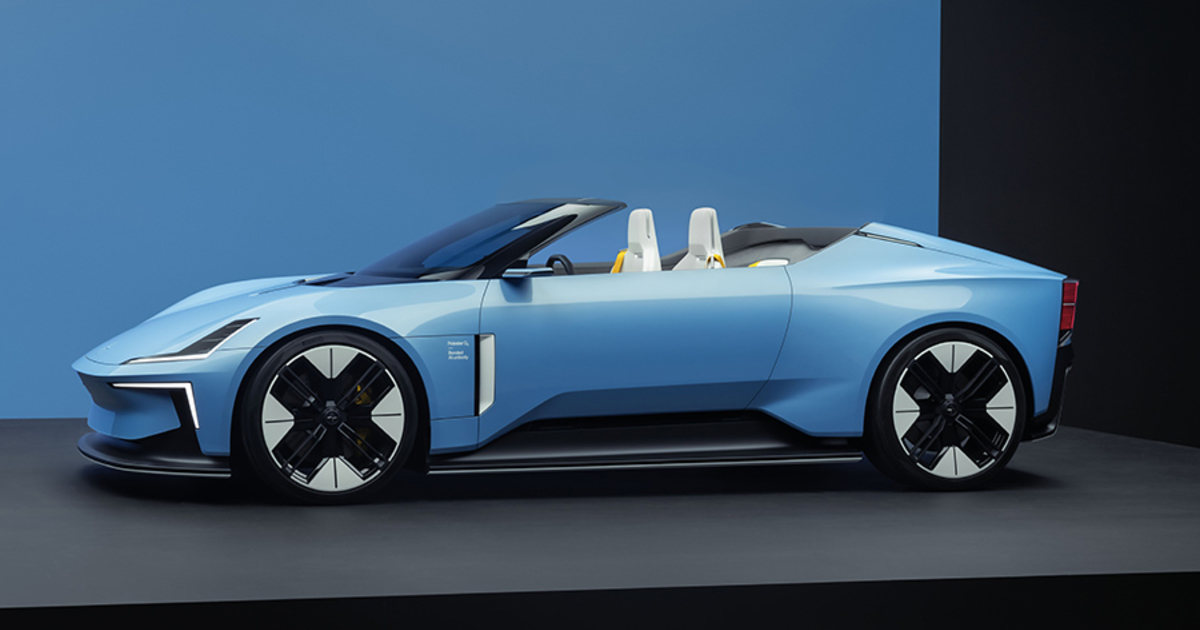 Polestar said Tuesday it will turn its O2 concept into its next halo car, which is likely to be aimed at the Porsche 911.

The brand’s most powerful and expensive model now is the Polestar 1, which offers more than 600 hp and starts at 155,000 euros. Meanwhile, the Polestar 3 premium large SUV, which will debut in October, is expected to start at 75,000 euros.

Polestar will build the hardtop convertible alongside the Polestar 5 electric luxury sedan in Chongqing, China.

The plant is owned by Geely Holding but operated by Polestar, which was co-founded by Volvo Cars and Geely in 2017.

The cars will share Polestar’s new lightweight bonded-aluminum platform and an 800-volt electric architecture that in addition to providing nearly 900 hp of power will offer 900 newton meters of torque, 0 to 100 kph (62 mph) acceleration in 3.2 seconds, a top speed of 250 kph (155 mph) and an estimated range of more than 480 km (300 miles).

Polestar previewed what to expect from the Polestar 5, which is due in 2024, at the Goodwood Festival of Speed in England in June.

The four-door GT will be aimed at the Porsche Taycan, Tesla Model S as well as EVs from Mercedes-Benz, Jaguar and Lucid.

Like the Polestar 6, the Polestar 5 started as a concept, called the Precept, that evolved into the brand’s future flagship grand tourer.

Polestar currently aligns its estimated starting prices with Porsche models. For instance, the Polestar 3’s 75,000-euro base price is in line with the Porsche Cayenne, which starts at about 83,000 euros in Germany.

The Polestar 4 and Polestar 5, for which no official prices have been given, will align with the Porsche Macan and Porsche Panamera, which start at about 66,000 euros and 98,000 euros, respectively, in Germany.

The current 911 Turbo Cabriolet starts in about 212,000 euros in Porsche’s home market.

Niche within a niche

The only battery-powered open-top model sold in Europe now is the Smart ForTwo Cabriolet, which had a volume of less than 7,100 last year, according to market research Dataforce.

The premium convertible segment, where the Polestar 6 would compete, is led by the Mini, BMW 4 Series and 911 while in the U.S. the niche’s top-sellers are the Chevrolet Corvette and 911.

“Even the Ford Mustang and Jaguar F-Type are struggling to reach 1,000 new registrations a year in Europe,” Dataforce Senior Automotive Analyst Benjamin Kibies told Automotive News Europe. “But a sporty electric convertible would be the first of its kind and definitely attract attention for the brand.”

“As a six-figure electric sports car, the Polestar 6 will not be a high-volume product, but it will shine a spotlight onto the Polestar brand,” AutoPacific President Ed Kim said. “With its portfolio of volume products fleshed out, it’s appropriate for the brand to think about brand extension products that can inspire consumers who hadn’t yet considered a Polestar to take notice.”

Polestar decided to make the Polestar 6 because of “the overwhelming consumer and press response” for the car, Polestar CEO Thomas Ingenlath said in a release.

To capitalize on that momentum, Polestar said it will start taking orders for the first 500 units of the hardtop convertible today. The cost to reserve a so-called “build slot” for car is $25,000, which is refundable.

Those numbered units will be part of the Polestar 6 LA Concept edition, which will carry over the sky blue exterior, light leather interior and 21-inch wheels from the Polestar O2 concept, which the automaker debuted on the rooftop of a Beverley Hills office building in March.

At that event, Polestar design boss Maximilian Missoni hinted the O2 was destined to be more than a show car.
It is “not so far away from reality,” Missoni told Automotive News Europe sister publication Automotive News at the time.

The O2 sits low and wide and features short front and rear overhangs, a compact 2+2 cabin design and a long wheelbase.

Aerodynamics are maximized through disguised design features, such as integrated ducts that improve airflow over the wheels and body sides and rear lights that function as air blades to reduce turbulence behind the car.

Missoni described the O2 as a “meeting point between technology and art, between precision and sculpture.”
“It’s an amazing piece of design, but I could drive it tomorrow,” he added.

The new halo car’s production confirmation also comes days ahead of the brand’s attendance later this week at the Pebble Beach Concours d’Elegance, where the O2 concept will be featured. Polestar’s last visit to Pebble Beach coincided with another key moment in the 5-year-old brand’s history (see box, right).

It has been an eventful year for the automaker, which despite seriously supply setbacks nearly sold as many cars in the first half as it did in all of 2021.

In June, Polestar joined the Nasdaq in an $890 million deal.

In April, the company said rental car firm Hertz Global Holdings would buy up to 65,000 EVs from over five years in a deal that sources estimate is worth $3 billion.