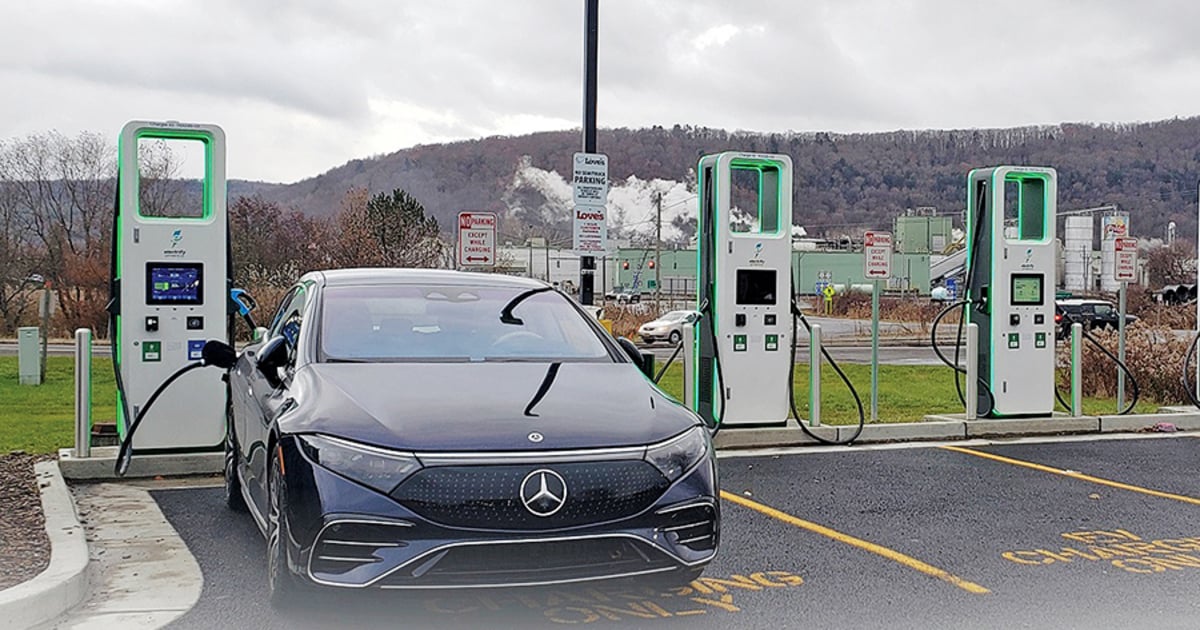 The auto industry is looking to the capability known as Plug & Charge to level the playing field with Tesla’s Supercharger DC fast charging network.

It could be a crucial tool in helping drivers charge quickly and more easily as the industry moves to sell more electric vehicles.

Tesla has a huge head start with its Supercharger network, which launched in 2012. It permits Tesla drivers to reach almost any destination in the continental U.S. Although the network is dedicated to Tesla drivers, the automaker says it plans to open it to other makes.

Plug & Charge is the response from other automakers. It’s a complex set of software and security protocols that make on-road DC fast charging quicker and simpler.

The system has software operating in the background that authorizes an EV at a charging station to identify itself to the network and provide a valid payment mechanism, which lives within the automaker app. No other action is needed.

Tesla pioneered charging simplicity. Its navigation system takes drivers to Superchargers if the total route distance exceeds the car’s range. The driver arrives, plugs in, waits the recommended number of minutes, unplugs and drives away. The network has proved remarkably reliable. In part, that’s because Tesla controls the entire ecosystem. It built the cars, the charging stations and the software that connects them.

Drivers of other brands must use apps — whether on their phone or built into the car’s navigation — to find charging sites run by multiple independent national or regional networks. At best, starting a charge session requires swiping a credit card, as at a gas pump. But many charging stations lack a credit card reader. That forces drivers to have an RFID fob or membership card.

Alternately, they can launch the charging by calling a toll-free number or joining the network by downloading a phone app. It’s akin to having gas stations limit sales to members already enrolled with the company. Nonmembers would have to call a toll-free number to unlock the pump.

The goal of Plug & Charge is to give drivers of other EVs a Tesla-like experience. Drive up, plug in and sit back as the car charges: no validation, no memberships, no toll-free numbers.

The basic principle is embodied in ISO 15118, an international standard interface for communications between a vehicle and the grid charging it. The standard includes communications security and bidirectional charging and provides a protocol that EV charging networks can adopt.

That protocol involves the exchange and validation of secure public key tokens among multiple parties: the vehicle, identified by the VIN; the charging network; and a third-party payment mechanism, which in the U.S. is provided mainly by the vehicle maker. Each participant must prove it’s a trusted node in the relationship.

Once every party has accepted the others’ certificates as validated by a third party, the charging session initiates automatically. Robert Barrosa, senior director of sales, business development and marketing at Electrify America, called it “a three-legged stool.” Each leg has to prove its validity using public key infrastructure before the other two will accept it.

The payment mechanism often starts as a preset charging credit on a specific network provided with the vehicle purchase. It varies between a predetermined number of kilowatt-hours or unlimited use for a period of time. When the automaker incentive ends, the network charges the owner’s credit card.

From a driver’s point of view, charging an EV with Plug & Charge is just as simple as using the Tesla system. But already, there’s potential for confusion over how the Plug & Charge system is named. In June, General Motors announced that its new Ultium-based electric vehicles would have “Plug and Charge” capabilities for the GMC Hummer EV, Cadillac Lyriq and upcoming electric models.

The software underneath is not presently ISO 15118-compliant. Instead, it’s based on a different protocol called Autocharge. It validates a charging session using a vehicle’s fixed media access controller, or MAC, address — essentially the car’s address on a network. It’s an older technology. Vehicles without fixed MAC addresses can’t use it.

The driver’s experience using the GM system is identical to that of using Plug & Charge even though the underlying technology differs, Alex Keros, GM’s director of EV infrastructure, told Automotive News. GM plans to provide seamless charging for all of its EVs going forward, he said.

It will move to an ISO 15118-compliant Plug & Charge implementation when the second generation of network, protocol and security requirements are final. In the interim, GM is talking to other network providers about implementing copies of its Autocharge-based system to make charging easier for customers.

Compared with Plug & Charge, the Autocharge-based system has fewer security features. To compensate, Keros said, GM and EVgo created ways to ensure the validity of a charging session. GM has detailed telemetry data on the location and other operating data for its EVs, and it matches that to the VIN and other data provided by EVgo when a charging session is requested.

Regardless of the name, seamless charging systems are poised to become a vital component of the EV transition and have plenty of room for development.

“It’s something new for OEMs,” said Barrosa, of Electrify America. “We have a lot of back-and-forth as they get up to speed.”