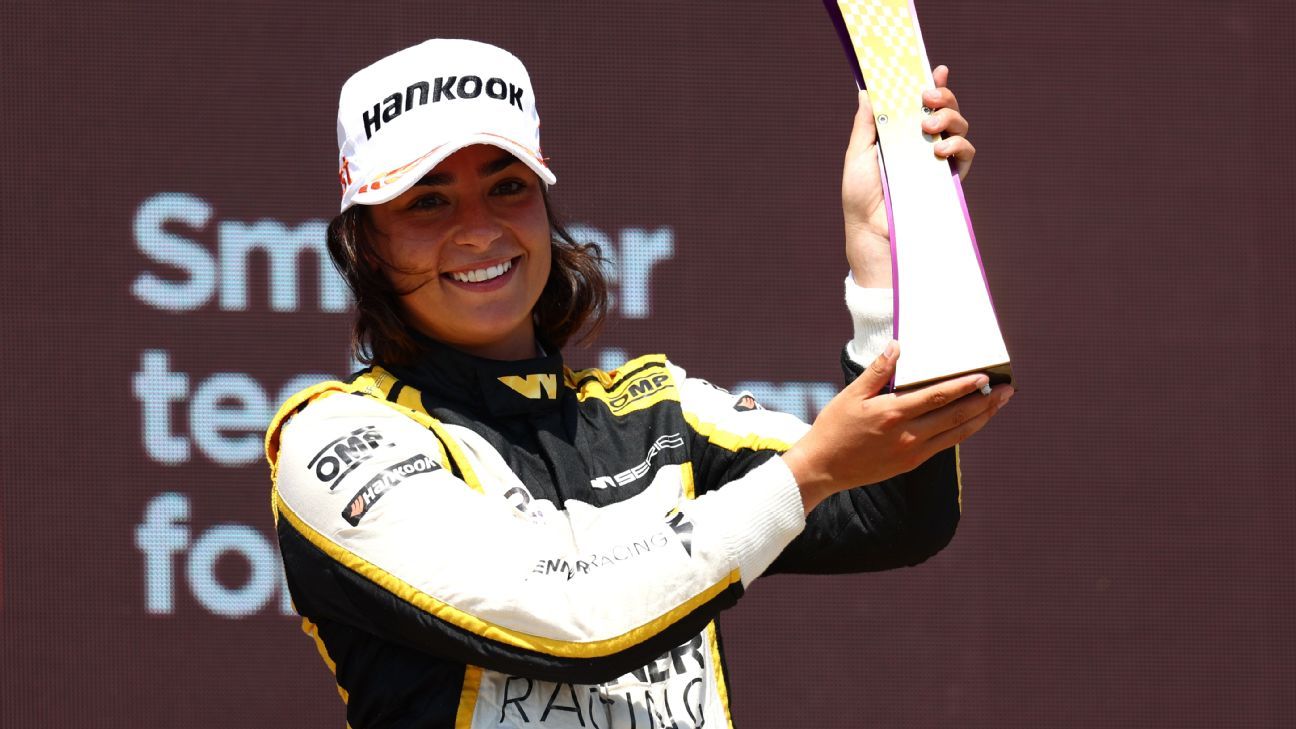 Sometimes, in the cutthroat world of junior series driving, careers putter out long before they should. That’s especially for women, who often work with lower budgets and fewer opportunities than men in their relative positions.

As 2019 W Series runner-up Alice Powell put it, when asked why she’d taken an extended break from racing: “I didn’t run out of talent.”

The drive to find a female driver capable of reaching Formula One seems stronger than ever, but the most proven woman driving in single seaters today, soon-to-be-three-time W Series champion Jamie Chadwick, can’t seem to get out of the regional Formula 3 series and move further up the ranks.

W Series is almost unique among junior series by not forcing the champion to move on. If you win Formula 3 or Formula 2, you’re barred from coming back the following season. It’s a system with its own problems, often condemning talented drivers to a year making tea at the back of an F1 team’s garage before a spot might open up for them to progress.

As a consequence of W Series’ way, though, Chadwick has found herself contesting — or really, taking almost totally uncontested — a third title. Her future looks uncertain, though, and she heads into the summer break (the championship reconvenes on Sept. 30 in Singapore) with a question mark over what she will do next. Or how she’ll take that step to make progress out of what’s intended to be a stepping-stone championship.

“My goal is always to keep progressing,” Chadwick said ahead of the break. “I really want the step up. I know I need to perform still this year but I’ve still got one eye on the future as well.

“Any feeder series is the goal, so Formula 3, Formula 2, but also I’m actually looking at American opportunities and potentially Indy Lights as well. So I’m just exploring all options. We’ve got a nice big break after Budapest so there’d be some time to really understand what we’re capable of and what the best opportunity is.”

It seems very clear that Chadwick cannot return for a fourth season in W Series, for her sake and the championship’s. It’s much less clear where she goes from here, though, having just turned 24 and with the professional part of her career tantalisingly beckoning but seemingly out of reach.

The past two women to drive in Formula 3 and Formula 2, respectively, were Sophia Flörsch and Tatiana Calderón. Flörsch entered the series during lockdown and in an uncompetitive Campos car, failing to score a point during the 2020 season.

Calderón had had more years in grand prix-supporting junior series and was a member of Sauber’s junior programme but still struggled with the HWA Racelab car she found herself in for the 2019 season, which the exceptionally talented Anthoine Hubert took to a race win before his tragic death on track that season. But subsequent stand-in drivers, all well experienced, found a similar lack of performance in as Calderón did.

Former F1 driver David Coulthard was one of the founders of W Series and now also More Than Equal, a programme to try, specifically, to get a woman to F1. He said that, understandably, Chadwick had to consider whether she would be in a position to be competitive in F3 or F2.

“Motor racing, once you’ve created a platform, should be a meritocracy,” Coulthard told media before the British Grand Prix last month. “That said, we know that in Formula 2 there’s only one, two or three of the teams that actually consistently win.

That might explain why Chadwick unexpectedly found herself without an F3 drive this year. The plan hadn’t been to carry on in W Series; she’d won back-to-back (bar a pandemic-grade interruption) titles and wasn’t aiming to return. Her announcement, that she was joining Jenner Racing for a third run in the championship, was more defeated than most drivers’ signing videos and she issued another, a few days later, assuring fans that she was trying to get to F3 but that things simply didn’t always work out.

Bruno Michel, CEO of F3 and F2, said he didn’t know why her deal fell through.

“I don’t really understand why she couldn’t get a seat in Formula 3, to be perfectly honest. There were teams that were ready to take her,” Michel assured journalists at the start of this season. “I know there’s been a discussion with one team, I don’t know what happened at the end.

“I think it’s a pity because I think she would be ready for Formula 3.”

Michel, though, also cautioned that female drivers coming to F3 and F2 had to be able to qualify well enough to be at the front of the series’ partially reversed grids. Qualifying 12th in F3 gives you pole for the sprint race, a potentially huge opportunity to score points that Flörsch — whose best qualifying result of the season was 17th — missed out on.

“We absolutely need to prepare young female drivers to get to the level of Formula 3 with success, and with success it means that we need to be sure that when they come there, at least they can qualify in the top 12,” explained Michel. “If it’s to be at the back of the grid it will be counterproductive because we will have many people saying, ‘look,’ which is exactly what we don’t want.

And preparation is a major barrier. Chadwick has now done 116 races in single-seater cars, more than any other driver in W Series. Comparatively, before he got into an F2 car, Lando Norris had done 162. Chadwick has closed the gap considerably, but she is, ultimately, inexperienced compared to her male peers.

In male-dominated sports fields where there is no gender segregation, like motorsport and esports, the overwhelming reality is that little girls start later and don’t get as much experience early on. It’s easy to see the four-year gap between Norris, who started karting at 7, and Chadwick, who started age 11.

W Series CEO Catherine Bond-Muir said that asking why Chadwick has not reached the career highs of her male peers had an easy answer: She was still in an earlier stage.

“If you look at our best driver at the moment, who is unquestionably Jamie, and compare to her peers that are Lando [Norris] and George [Russell], they are the same age, they meet socially with each other, they’re all friends,” explained Bond-Muir. “If you compare the number of hours that the boys have had racing from karting onwards and into the single-seater pyramid, they have had tens, if not hundreds of, times the number of hours in a car that Jamie has.

And Chadwick isn’t just driving for herself. If she gets a good ride in F3 or Indy Lights, then she represents a (slightly delayed) major success for W Series’ programme. If she doesn’t, then awkward questions about whether the series is truly progressing women’s careers, or corralling them into a lower-category holding pattern, inevitably have to be asked.

Coulthard hinted that the FIA, motorsport’s overriding body, had leant on the series to push Chadwick onwards.

And without a seat secured, Chadwick remains in that limbo. Although a third title will surely put her in a better bargaining position, the prize money lubricating a deal if nothing else, she has the added pressure of needing to make it work. Teams can smell desperation and they make you pay for it, financially so unless a Trevor Carlin or the sadly deceased Jean-Paul Driot — both junior team bosses who scouted out talent over money — comes along, she may find herself in a weaker position than her budget would suggest.

The costs are staggering, in any case. FIA Formula 3 is somewhere in the region of €3 million for a season and Formula 2 is understood, in some cases, to cost as much as €6 million or even more, depending on spare parts. W Series costs nothing to compete in and actively pays its drivers, allowing most of its drivers much greater freedom to concentrate on their racing careers rather than working as stunt drivers or plumbers’ mates to make ends meet off track.

If Chadwick doesn’t find a seat, it will be a problem for her career. And, unfortunately, women at large in motorsport. It shouldn’t be put on her shoulders, though, nor should the reputation she already carries heavily for her gender. This has to be looked at on a systemic level. The truth is there are still enormous barriers to women progressing in motorsport and a media-friendly, very notable woman’s struggle to get up the ladder should be seen as a brutal example of that, not her failure.