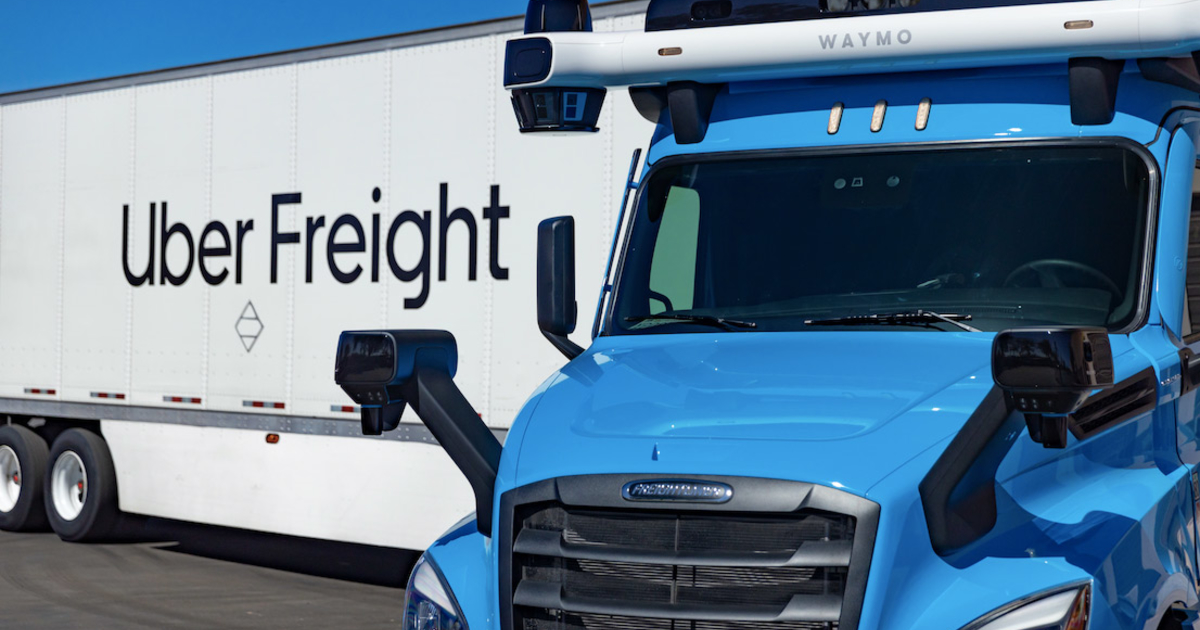 Uber Freight outlined a broad vision of how robotic trucking will work, noting human drivers will continue to play a significant but changing role in cargo hauling.

The division said in a Thursday blog post and accompanying white paper that autonomous trucking represents a solution to the persistent professional driver shortage and other supply chain obstacles.

It believes the commercialization of autonomous driving will start with a hub-to-hub model based on highway-adjacent depots. Humans will drive freight to the hub through urban and heavy traffic areas. The robot truck will take the cargo onto a highway to a destination hub. Humans will transport the freight through that metropolitan area to the final endpoint.

“Uber Freight envisions a future where autonomous trucks and human drivers operate alongside one another in a hybrid network to ease the burden of increased freight demand, enhance truck drivers’ quality of life and create more value for everyone in the supply chain,” the company wrote.

Although Uber Freight is an outgrowth of the ride-hailing company, it sees trucking beating robotaxis to the first broad use of autonomous driving. It has developed a digital system to match motor carriers and truckers to companies seeking cargo transport.

“Highway driving has limited complexity, so it is technically easier than driving in an urban environment,” Mike Ramsey, senior analyst for automotive and smart mobility at Gartner, told Automotive News.

The shortage of drivers, increasing demand for moving packages and the need to improve safety are pushing the technology into freight hauling, he said.

The highway system presents less of a technical challenge than urban driving where cars, cyclists and pedestrians create more obstacles for the autonomous driving system.

U.S. interstate highways are more uniform than local streets and roads because they are regulated and maintained by the Federal Highway Administration rather than a patchwork of regional governments, Uber said.

Uber called the hub-to-hub model “a practical starting point” and believes it is economically feasible, especially as it extends to longer routes.

It is already working with autonomous driving technology developers and Waymo, a unit of Google parent Alphabet Inc., to move goods in Texas. Aurora has established four terminals for its autonomous vehicles and is hauling freight for a handful of clients between Fort Worth and El Paso and also Dallas and Houston.

For now, it is working on building volume but at some point will connect the dots to create trucking lanes across the length of Texas.

That matches Uber’s view of how autonomous trucking will grow.

“Deployment will expand incrementally along strategic corridors in the U.S., starting with states where weather and regulations are favorable,” Uber wrote.

According to Uber’s analysis, autonomous freight hauling will work on 80 percent of the nation’s trucking routes, or lanes, if the AV carriers can hit a cost of $1 per mile on the middle miles — those that don’t require a human. It still works on 40 percent of the lanes at a middle-mile cost of $2 per mile.

Autonomous trucking commercialization also will address other labor issues that have plagued freight and logistics, according to Uber. Autonomous routes will free human drivers to focus on local and regional delivery. That allows them to spend more time at home and addresses one of the hurdles motor carriers face when recruiting drivers.