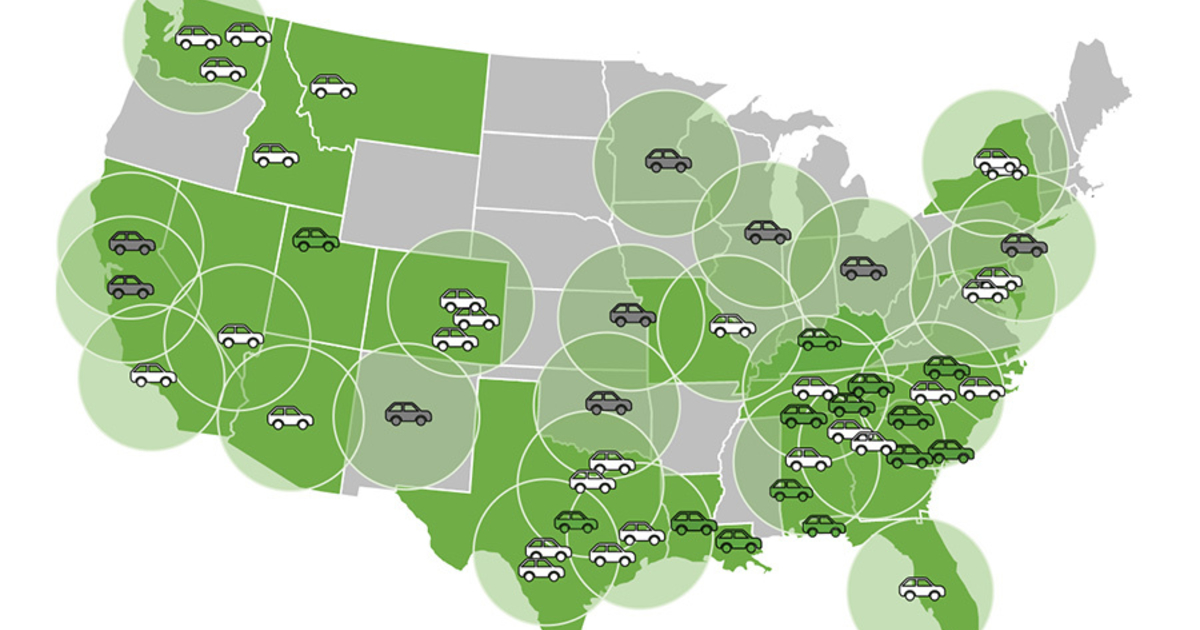 Used-vehicle seller EchoPark, launched by Sonic Automotive in 2014 as a single store in the Denver market, has expanded to 50 outlets nationwide, including 3 locations that opened in the 2nd quarter. Sonic says EchoPark is on pace to reach 50% U.S. population coverage by the end of 2022 and 90% by 2025. The map shows a sampling of locations.

Note: Future locations and U.S. population coverage are based on projections. Actual results may differ.

Sonic last week revealed that it ended a strategic review of its EchoPark used-vehicle unit without taking further action. The review had been seen as a possible precursor to an EchoPark spinoff. The company also backed off on EchoPark growth goals and revealed that it had taken undisclosed head count actions.

“We carefully evaluated a range of alternatives, and our board has determined the timing and current market conditions do not align with our value creation objectives for the business,” Sonic CEO David Smith said in a call with analysts. “We will continue to execute on our expansion plans for EchoPark, and we will continue to monitor market conditions and periodically consider potential opportunities to maximize long-term shareholder value as they rise.”

Sonic said it was pushing back previously stated goals for EchoPark to reach 575,000 annual used-vehicle sales and $14 billion in annual revenue by the end of 2025. New goals were not given.

Smith also noted that Sonic has “taken steps to adjust our head count and expense structure at EchoPark to better align with current volume levels and our near-term growth plan.”

He did not specify those steps, and a company representative declined to elaborate. Sonic executives were not made available for interviews last week. In its most recent 10-K annual report, Sonic said it had 10,200 employees as of Dec. 31.

Smith reiterated that EchoPark, which has 50 locations nationwide, remains on pace to reach 50 percent U.S. population coverage by the end of 2022 and 90 percent coverage by 2025.

Second-quarter revenue for the EchoPark unit million, a record. The used-vehicle business posted a pretax loss of $34.9 million.

Sonic President Jeff Dyke said in the analyst call that there is consumer demand for used vehicles but that 1- to 4-year-old vehicles, long the retailer’s inventory criteria for EchoPark locations, are “just very hard to get.”

This year, Sonic began including vehicles up to 8 years old in EchoPark’s inventory. Dyke said the retailer has started to see “some great results” from that move.

“If you look at our Houston market, 32 percent of the vehicles that we sold were 5-plus-year-old cars in June of ’22,” Dyke said. “That’s just continuing to improve as we move into the third quarter.”

“Those markets that were losing money in previous quarters are now going to be at least breakeven,” Dyke said. The “Denver market should make in the $300,000 range in July. All of this is from the moves that we’ve made with the inventory.”

Penske’s CarShop standalone used-vehicle business lost money in each of the past two quarters because of the higher cost of acquiring vehicles. The division posted a second-quarter pretax loss of $1.5 million and lost $2.7 million pretax for the first six months of the year.

“If you look at the inventory, the price of the inventory, it still is difficult to come by,” Penske spokesman Anthony Pordon said. “And then, of course, part shortages on top of that and higher costs make the reconditioning process that much more difficult.”

CarShop’s second-quarter revenue increased 15 percent to $468 million on sales of 20,124 vehicles, up 7 percent.

Penske operated 21 CarShop outlets in the quarter, after it in May closed two small CarShop express locations in the U.K.

CEO Roger Penske said it’s tough to acquire vehicles for CarShop right now. The unit isn’t selling vehicles priced at $10,000 or less because of the amount of reconditioning they require and customer feedback. CarShop instead aims to stay in the $15,000 to $25,000 range.

“It’s very, very difficult to acquire cars at that [price] point,” Penske said. “So we’re just really at this point looking at cost and technology. And I think, even though, again, we did 20,000 units in the quarter, we just are not getting the margin.”

Penske said CarShop is doing fine at the store levels.

“When you add on all the technology and the other fixed costs we have, that’s what’s impacting our profitability,” he said. “But we’re fully engaged in the brand. We’re continuing to grow it.”

Penske said there likely will be new CarShop openings over the next six months.

“And we’re going to wait and see what happens in the market once this thing opens up and we have used availability,” he said.