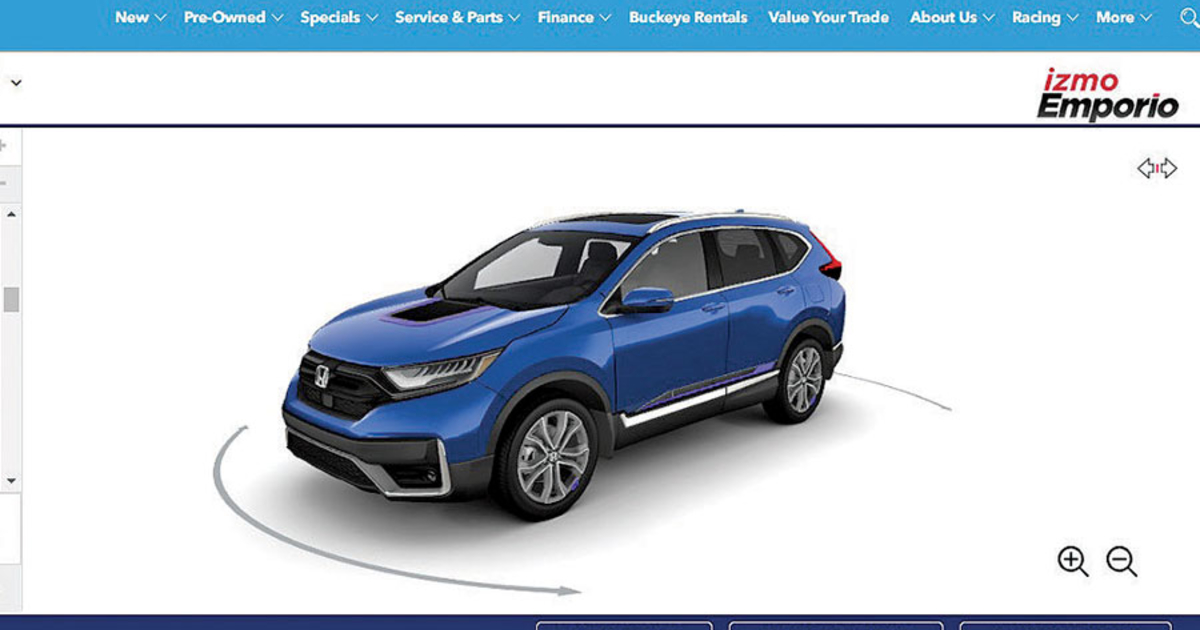 Buckeye Honda has worked to overcome inventory shortages by creating an interactive research hub where online shoppers can get an up-close look at a vehicle even if it’s not in stock.

The Lancaster, Ohio, dealership deployed a virtual configurator on its site this spring called izmoEmporio that lets users personalize new Honda models with accessories and get 360-degree views of the exterior and interiors.

It has been operational for only a few months, but the configurator — a relatively rare offering on a dealership’s website — is fostering engagement with online shoppers and helping the store sell more accessories. Management says consumers who use the tool are spending an average of two minutes on it, and the dealership considers them higher-quality leads than typical website visitors.

Consumers can access the technology on a phone, tablet or computer.

More than 300 vehicles covering the full spectrum of Honda’s lineup have been configured on the site so far.

The tool was created by izmocars, a San Francisco-based producer of interactive media content for the auto industry.

IzmoEmporio “gives the customer the ability to look at inventory and do some research on our website,” said Scott Thomas, Buckeye Honda’s general manager. “The leads that we have generated off of it so far have definitely shown that they’re customers that are very serious and very engaged, low-funnel type of customers that are close to making a purchase and want to get the right car with the right equipment on it.”

The dealership, which sold 1,718 new and used vehicles last year, has been working to fine-tune its messaging around the experience.

It initially branded the tool on its website as a virtual showroom but has since tweaked that approach to encourage more usage. It’s now listed in the new-vehicles menu as a “build and price” tool to attract customers thinking about buying a vehicle, while the service and parts menu calls it “accessorize your ride,” which is a message meant for people who already have bought a vehicle.

The traditional approach sees shoppers build and price a vehicle on the automaker’s site, where they can explore trims and options for a particular nameplate and then get referred to dealers in their areas.

But Thomas sees value in having a configurator that aids research and keeps consumers on the dealership’s website for longer periods.

“We all know that the more time a customer spends on our site, the better chance we have of selling them a car,” Thomas said. “I don’t think we’re necessarily trying to compete with the manufacturer, but when the customer does make it to our site, they don’t have to leave our site to be able to visualize something that we may not have in stock.”

Buckeye Honda’s configurator showed its potential recently when a customer submitted a lead for a vehicle that wasn’t in stock. During the waiting period, the person went back to the store’s website, began toying with accessory options and added a black Honda emblem. The customer ended up buying the vehicle as configured on the site.

The store’s parts department has noticed increased interest in the emblem accessories it sells since the configurator went live.

Jack Young, Buckeye Honda’s marketing and content manager, said the store is considering sending emails to recent vehicle buyers in the hopes of piquing their interest about accessories. The configurator can let those customers see how the accessories would look on their particular model.

“Like any new technology and tool, it’s how can we best make the customer aware of it and then make it attractive and inviting for them,” Thomas said. “Obviously, a lot of people are doing much more research and using online digital tools. We’re finding that they are engaging with it.”

He pointed to the importance of finding different entry points for the feature — not just from the website’s front page or link in the navigation.

“It’s putting links in the [vehicle detail pages] and on banners on different pages throughout the website as well,” Thomas said.