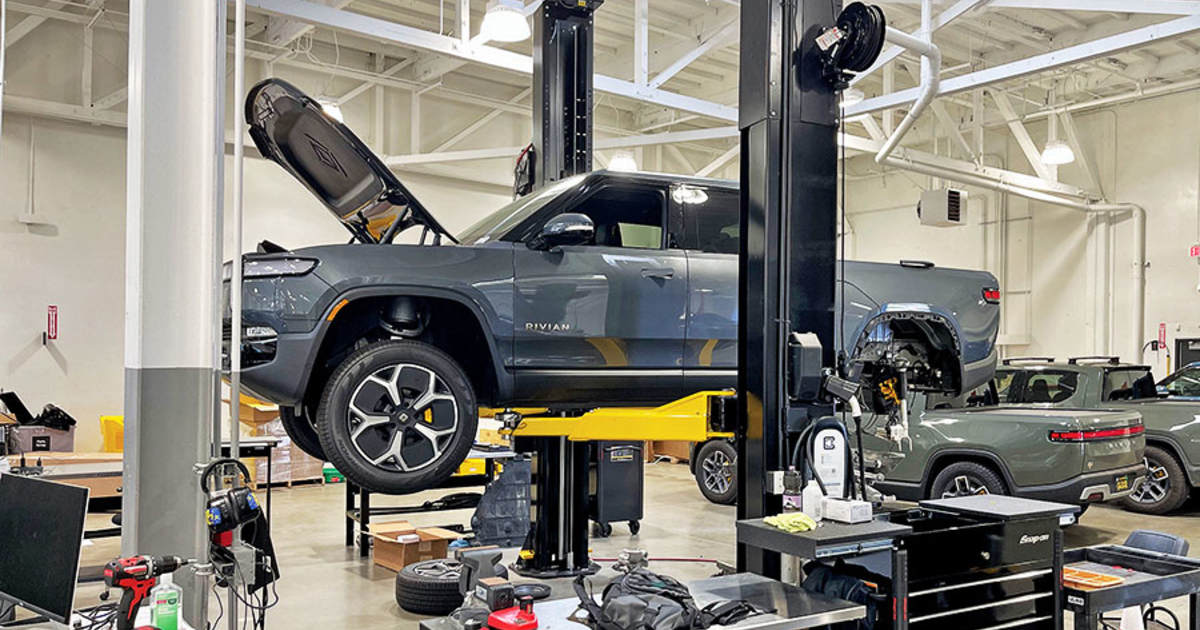 SAN FRANCISCO — Rivian’s retro-futuristic R1T pickup remains scarce on the streets of the Bay Area, but some locals have discovered a cluster of the highly acclaimed electric truck by the San Francisco airport.

There, in a commercial area near an Amazon warehouse, Rivian’s South San Francisco Service Center is chock-full of R1Ts coming in for their first service, a windshield replacement or a new front seat as part of an airbag-related recall.

Curious locals and would-be shoppers sometimes congregate in the parking lot, checking out the hardware. Although the electric vehicle startup sells directly to customers online, the cheerful facility also serves as a delivery center and test drive location.

“Everybody ends up finding our location, so now we have people coming in to take a look at our vehicles. So that’s also a selling point,” said Nataly Tomafsky, field service manager at the outpost.

Rivian has been building the R1T — which starts at $68,575 with shipping — since last September but has struggled to ramp up its Illinois plant because of parts shortages. It’s now launching the R1S SUV and commercial vans for Amazon.

With total Rivian deliveries rising from 1,227 in the first quarter to 4,467 in the second, service is becoming increasingly important to the company’s long-term brand value, given its lack of a dealership network compared with legacy rivals, analysts say.

“This is one of the reasons the franchise dealership model has worked so well for traditional automakers — it allows the automaker to design, engineer and build vehicles, while dealers focus on selling and servicing them,” Brauer said.

Rivian is gearing up for the task, with 21 service centers now open in U.S. metropolitan areas, such as Atlanta, Chicago, Denver, Houston, Las Vegas and Orlando. Half a dozen more are planned by the end of the year, the automaker said. Its first service facility outside the U.S. — in Vancouver, British Columbia — opens in the fall.

Although the Irvine, Calif., automaker announced layoffs last week of about 6 percent of its work force, it said it will continue hiring for service positions and spare factory workers.

Rivian doesn’t have traditional retail locations. Rather, its first “Rivian Hub” in Venice, Calif., near Los Angeles, serves as a community center for events and an experience center for Rivian products.

“A lot of people will prefer for us to go to their home or place of business rather than come over here,” Tomafsky said. “We’re going to alleviate that pain point,” particularly the crushing traffic during long stretches of the day in the area.

Rivian vehicles, with over-the-air updates, can also be fixed with software alone sometimes. And because they are connected to the cloud, some diagnostic services can be done remotely, making in-person repairs faster.

The South San Francisco location will get relief from a Rivian service center in San Jose scheduled to open this year. The greater Silicon Valley area remains the heart of the EV industry — with Tesla’s factory in Fremont and Lucid’s headquarters in Newark.

Rivian said in its first-quarter shareholder letter that much of its focus has been on ramping up production and meeting its target of 25,000 vehicles this year. That will barely dent its backlog, however: As of May 9, Rivian had more than 90,000 orders for the R1T and R1S, in addition to an initial order of 100,000 commercial vans from Amazon.

In the meantime, preparing the post-sale environment is also high on the startup’s priority list.

Brauer, the industry analyst, said EV leader Tesla serves as a cautionary tale for startups, as its service network has not kept up with booming sales, leading to rising customer complaints.