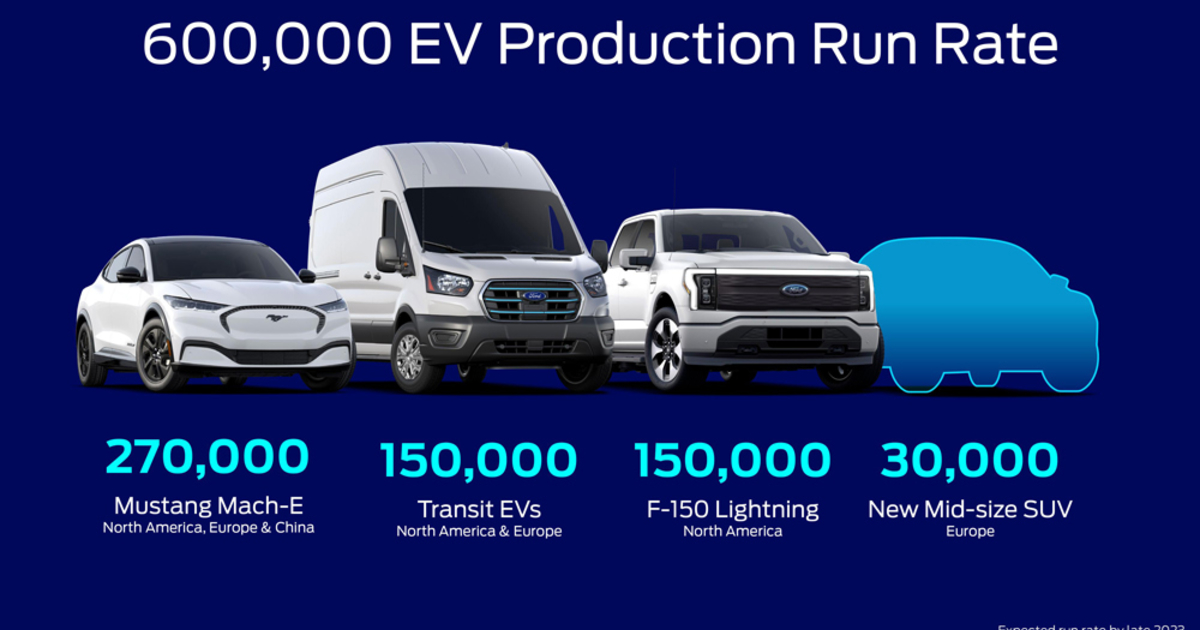 Ford Motor plans to add a new battery cell chemistry to its electric vehicle portfolio to increase capacity and make them cheaper to build.

The automaker plans to add lithium iron phosphate cells to the Mustang Mach-E next year and to the F-150 Lightning in early 2024, a move it said will reduce material costs for those products by 10 to 15 percent. The automaker currently uses nickel cobalt manganese battery packs for those vehicles and its E-Transit van.

The chemistry switch is one of a number of battery-related initiatives Ford announced Thursday as it seeks to ramp global EV production to a run rate of 600,000 units next year and 2 million by 2026. Ford said it already has secured all of the battery cell capacity needed for the 2023 target and has 70 percent of what it needs to achieve its 2026 goal.

“Ford’s new electric vehicle lineup has generated huge enthusiasm and demand, and now we are putting the industrial system in place to scale quickly,” Ford CEO Jim Farley said in a statement. “Our Model e team has moved with speed, focus and creativity to secure the battery capacity and raw materials we need to deliver breakthrough EVs for millions of customers.”

The news came a day after a report from Bloomberg said the automaker is planning to cut up to 8,000 jobs in the coming weeks as it works to fund its EV efforts. The cuts would come from the division known as Ford Blue, which is resposible for internal combustion vehicles; the automaker’s EV unit is now known as Model e, with Farley serving as its president.

Ford said it plans to localize and use 40 gigawatt hours of lithium iron phosphate cell capacity in North America starting in 2026. It also signed a non-binding memorandum of understanding with CATL to “explore cooperation” for supplying batteries across North America and overseas markets.

Ford said it has sourced “most of the nickel” needed through 2026 through a number of agreements with mining companies and has also secured several contracts for lithium.

“Our team has been actively engaged with partners in the United States and around the world,” Lisa Drake, Ford Model e vice president, EV Industrialization, said in a statement. “We will move fast in the key markets and regions where critical supplies are available, meeting with government officials, mining companies and processors and signing MOUs and agreements that reflect Ford’s ESG expectations and underpin Ford’s plan to bring EVs to millions.”

The automaker previously has said it plans to invest over $50 billion in EVs through 2026. It is targeting total company adjusted earnings before interest and taxes margins of 10 percent, with 8 percent margins for EVs.