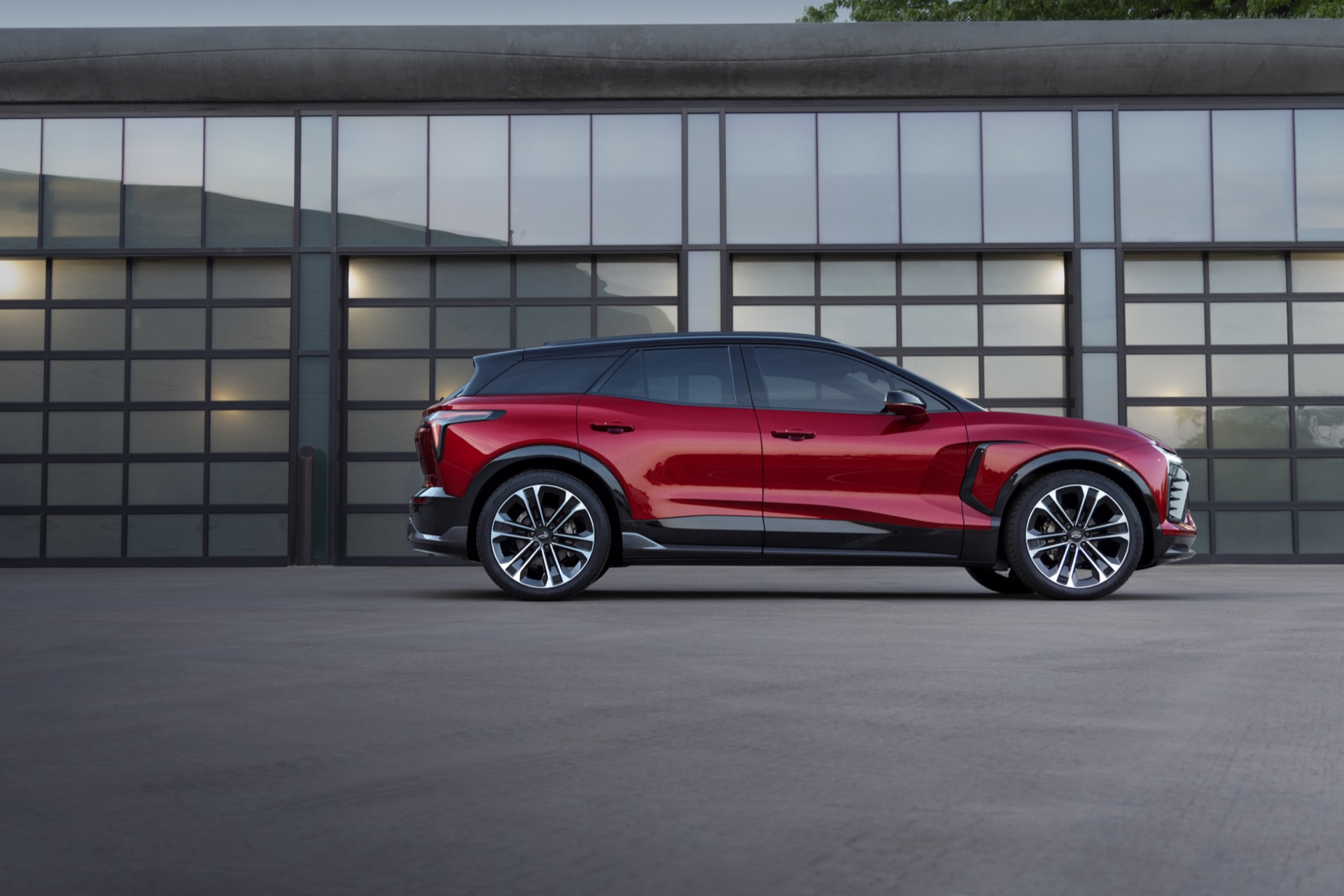 What kind of car is the 2024 Chevrolet Blazer EV? What does it compare to?

The Chevrolet Blazer EV is a battery electric version of the Blazer mid-size crossover SUV. Though it shares nothing but a name with the gas version, the electric crossover SUV with Camaro vibes competes with the Ford Mustang Mach-E, Kia EV6, and Tesla Model Y.

It looks good, it’s loaded with standard features, and its performance specs are promising, but we’ll withhold our TCC Rating until we drive it early next year. (Read more about how we rate cars.)

It’s new in everything but name.

The EV embodies the sporty look of the gas Blazer that relaunched in 2018, yet it also channels the Camaro’s muscle car curves. Short overhangs and a raked windshield give it a long and lean profile, yet cladding over the rounded wheel arches and rocker panels lend it a crossover SUV finish. The EV’s coke-bottle design curves down the belt line between buff fenders and available 22-inch wheels. The window line rises up at the rear, pinching the squat greenhouse into an interesting if not odd take on the floating roof concept.

SS models have a black insert and air intakes that mimic the Camaro SS. On top trims, a light bar spans the face, and the lights dance across the illuminated bow tie as the driver with fob approaches or leaves. It also sequences in blue when charging starts, and the pulsing intensifies as the battery gains more charge.

The luminescence continues inside. The turbine-style vents of the gas Blazer illuminate the center stack, and the cylindrical shell of the exterior vents reach deep into the dash and are ribbed with a translucent material that is a welcome change from all the gloss black plastic proliferating in other crossover SUVs. RS and SS models sport a flat-bottomed version of a three-spoke steering wheel.

Even the base 1LT comes with a 17.7-inch touchscreen that cants toward the driver under the same pane of glass housing the 11.0-inch digital gauge cluster, which is also standard. A large volume button separates the two, and because it stretches horizontally instead of vertically the size doesn’t make it stick out like a sore screen, as in rivals. A bar of climate buttons flanked by temp dials separates the lower dash. Performance

The top grade comes standard with a dual-motor all-wheel drive system utilizing the largest of three battery packs available in the Blazer EV. Chevy could not confirm pack energy or motor output for the entire lineup at press time, yet the SS is rated at 564 hp and 684 lb-ft of torque. In WOW (Wide Open Watts) mode, Chevrolet estimates the SS to sprint to 60 mph in less than four seconds. That’s blazing, all right. The SS also has front Brembo brakes shared with the police pursuit vehicle (PPV). Range estimates max out at 290 miles for the SS.

That’s straightforward enough. But GM has done something no other automaker has done with their EV crossover SUV by offering it in dual-motor AWD, or single-motor front-wheel drive, or single-motor rear-wheel drive. The base 1LT comes with FWD and an estimated range of 247 miles. The 2LT also has FWD and a peak range of 293 miles, or it can be optioned for dual-motor AWD. The RS model can be had with FWD and the medium-sized pack, or RWD with the larger battery pack, or it can be optioned to AWD. The range estimate peaks at 320 miles.

We don’t know motor size or the three available battery sizes, nor do we know curb weight or other specs. The Blazer EV has an 11.5 kw onboard charger for AC charging at home, and it has DC fast-charging capability of up to 190 kw. As long as that Level 3 charger can pump out that much juice, the Blazer EV can add 78 miles of range in about 10 minutes, Chevy estimates.

One-pedal driving via a paddle shifter on the steering wheel similar to the Bolt EV is one of at least three regenerative braking settings for the Blazer EV. The captured energy can be used to power the climate system or it can be returned to the battery.

Each Blazer EV will use a multi-link rear suspension and a short-long-arm double wishbone front suspension unlike the less sophisticated but more prevalent MacPherson strut.

In spite of a blocky center console, the flat floor of the Blazer EV opens up to a roomy  cabin that can be made airier with a fixed glass roof and power sunroof optional on all but the base 1LT. Chevy boasts that the Blazer has the longest wheelbase in the crossover SUV segment. Those in front have great outward sightlines and plenty of space, but the optional glass roof integrated with a power sunroof can clip head room for rear passengers. Rear-seat riders above 6-foot tall have enough leg room to slouch if need be. The rear seats don’t have recline levers, but the latches on top of the 60/40 split seats can be left in a recline state. There’s no frunk, and no specs yet to determine if Chevy’s wheelbase claim leads to more passenger and cargo volume.

How much does the 2024 Chevrolet Blazer EV cost?

In addition to the standard screens, every Blazer EV comes with driver-assist features such as automatic emergency braking with pedestrian detection front and rear, active lane control, and automatic high beams. Chevrolet didn’t disclose all the available features and options.

Where is the 2024 Chevrolet Blazer EV made?