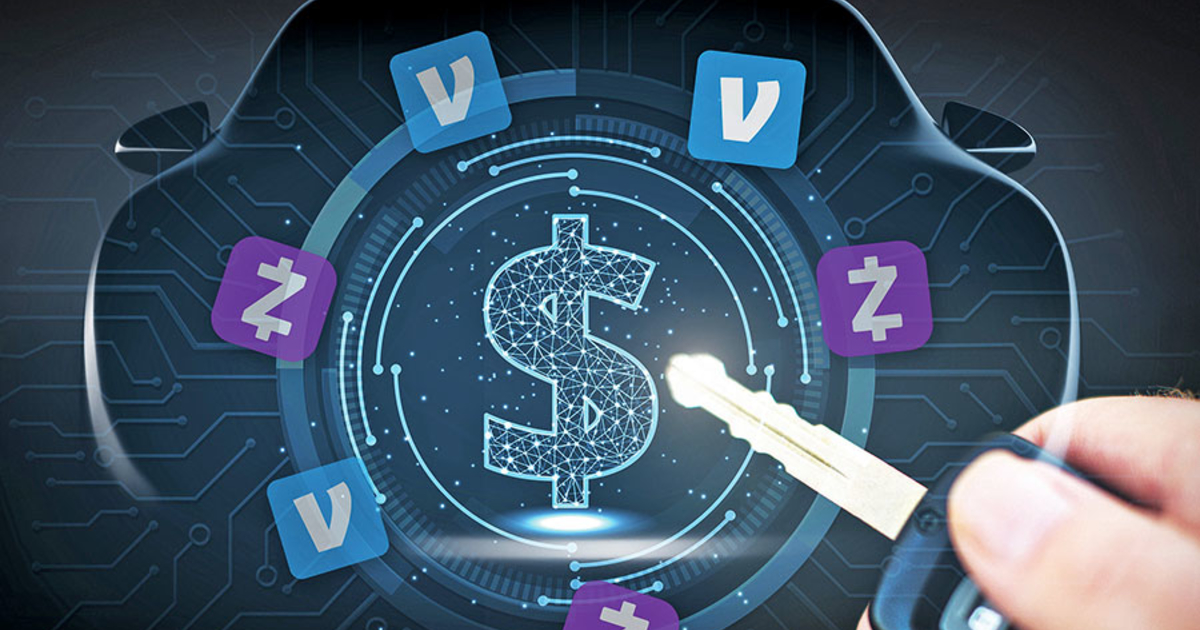 The rising popularity of Zelle, Venmo and other digital payment platforms has leaders at some large dealership groups asking: Why not try using such technology to pay consumers for their used cars and trucks?

Zelle is being used at some of the nation’s largest dealership groups. AutoNation Inc., Group 1 Automotive Inc. and Penske Automotive Group Inc. all offer it as an option vehicle sellers can select to receive payments. Meanwhile, Tampa, Fla.-based Morgan Automotive Group is testing Zelle this summer.

Consumers’ interest in instant payment transfers conducted via apps has shot up in part because it means they could get their money more quickly. Assuming all goes smoothly, sellers can receive the payment for their vehicle within mere hours, dealership group executives told Automotive News.

“Usage definitely has grown over time,” said Paige Goodwin, Group 1’s director of digital retailing. “We are right now averaging between 400 and 450 Zelle transactions per month.”

Group 1, based in Houston, has been using Zelle to pay for used-vehicle inventory for about a year, Goodwin said. The retailer’s average Zelle transaction is for around $13,000. Group 1 has paid via Zelle for some transactions that totaled more than $100,000 for the purchase of high-value Porsches or BMWs. One recent transaction for the purchase of a Lamborghini Huracan EVO topped $200,000, she said.

“In the beginning, we really needed to get a process around it, of course, but our customers love it,” Goodwin said. “They can get paid in under an hour, money in the bank account, and that’s pretty typical.”

In the second quarter of 2022, an estimated 14 dealership groups used Zelle to send payments to consumers, according to a spokeswoman for Early Warning Services, Zelle’s parent company. When counting each group’s individual locations, 97 dealerships use Zelle.

The country’s largest new-vehicle retailer, Fort Lauderdale, Fla.-based AutoNation, touts paying vehicle sellers via Zelle on its website. A spokesman for AutoNation did not respond to a request for comment.

Bloomfield Hills, Mich.-based Penske has been using Zelle at its U.S. locations since mid-2021, but most of the activity has taken place this year, company spokesman Anthony Pordon said. Usage of Zelle especially ramped up in the last 30 to 60 days, he said.

Penske CFO Shelley Hulgrave told Automotive News in April 2022 that platforms such as Zelle and Venmo are making an impact with younger consumers who don’t want to be paid with a paper check.

The company did not disclose the number of transactions it has made so far on the platform. Most Penske consumers interested in using Zelle are less than 40 years old, and most are familiar with the app because they’ve used similar online banking tools, Pordon said.

Penske had considered Venmo but ultimately found Zelle to be more user-friendly and in line with its needs, Pordon said.

Goodwin believes the appeal of getting paid expeditiously is more responsible for consumer interest than any appeal such platforms might have for younger people.

“A customer may even have a better offer from someone else, but because they can get paid so quickly, they’re willing to accept an offer that may be a little bit less than what they’ve gotten somewhere else,” Goodwin said.

It takes time to establish Zelle as a payment method and iron out any issues that arise, dealership group executives said.

Tampa, Fla.-based Morgan Automotive Group is piloting Zelle this month at one of its dealerships. The goal is to eventually launch it at the company’s 60-plus stores, but Morgan needs to get the process down to a science first, CFO Kelly Ross said.

Morgan tried to pilot Zelle about six months ago, but that attempt did not go well, she said.

“We just had the wrong customer base to pilot it with,” Ross said. “We should have piloted with a younger generation just to get our feet in the pool.”

The group expects to be able to use Zelle for more than just paying for used vehicles for inventory, Ross said. For instance, Morgan could use Zelle to refund consumers for things such as overpayment of tag fees or returned parts, she said.

It’s expensive to write a check — paper check, toner and envelope costs add up, Ross said. Zelle could be a more seamless and efficient payment method, she said.

Dealership groups should be careful about launching a digital payment option and be aware that certain limitations can slow the process, retailers said.

Penske won’t transfer money to a consumer via Zelle unless the person can produce the title to the vehicle they’re selling and outstanding liens on it are cleared, Pordon said.

The process also varies by bank. Zelle might not be a suitable option for people who use smaller banks, Group 1’s Goodwin said. Some customers prefer having a check sent and are not concerned about same-day or next-day payment, she said.

Said Ross: “The one thing that I’m curious about that I don’t have the answers to yet [is] if I had an issue with it, do I have to go through my bank? Is there a way to go directly to Zelle without going through our bank? And right now, there isn’t.”

Melissa Burden contributed to this report.