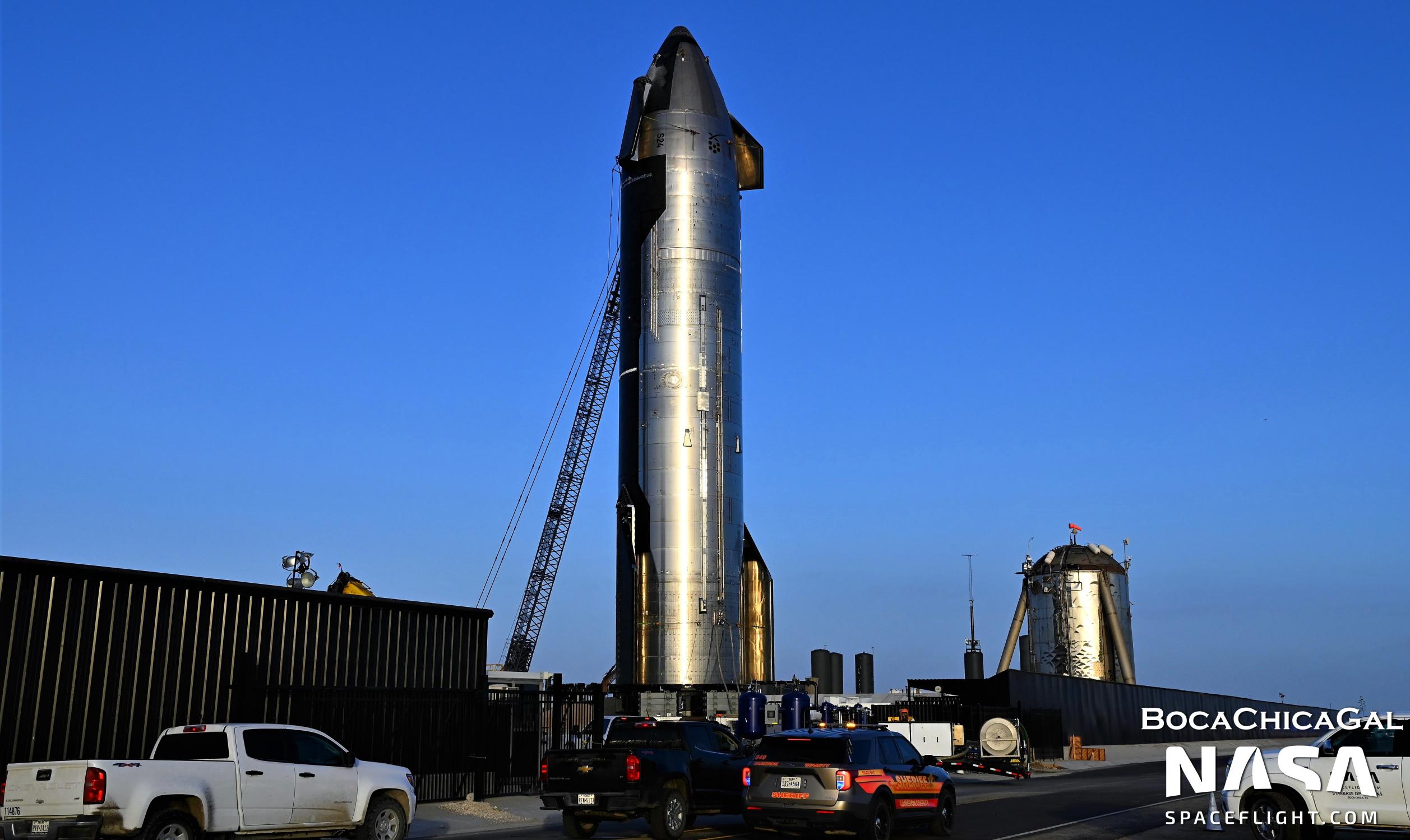 After several weeks of work back at SpaceX’s Starbase rocket factory, the company has transported a new and improved Starship prototype to nearby test and launch facilities, where it joined a similarly upgraded Super Heavy booster.

That Starship prototype – Ship 24 or S24 – is closely following in the footsteps of Super Heavy Booster 7 (B7), which kicked off a similar phase of preflight testing about two weeks ago. The purposes of their latest trips from the factory to the launch pad are also largely the same and could potentially open the door for Starship’s inaugural orbital launch attempt sometime later this year if the process goes smoothly. Both protypes have a ways to go, however.

Booster 7 and Ship 24 got off to fairly rocky starts when they began a less risky phase of proof testing in May and June. Apparently caused by improper sequencing or a small design flaw, a large steel tube meant to carry liquid methane fuel through Booster 7’s liquid oxygen tank and double as a storage vessel for landing propellant violently imploded when a vacuum formed inside it. It took SpaceX several weeks to repair the damage but, defying the odds, the tube was eventually repaired and Booster 7 completed another two proof tests soon after.

A few weeks later, during one of Ship 24’s first tests, a much smaller internal pipe – likely carrying high-pressure gas – also failed, damaging heat shield tiles and other adjacent plumbing. S24’s troubles were less dramatic and only took a few days to fix, but both were still new failure modes for the Starship program and served as a reminder that Starship hardware remains relatively immature and that SpaceX is still learning. Nonetheless, they also demonstrated SpaceX’s ability to respond quickly to new problems, as both B7 and S24 sailed through additional testing without apparent issue after quick repairs.

After completing cryogenic proof and thrust simulation testing, B7 and S24 returned to SpaceX’s factory facilities for Raptor installation and finishing touches. SpaceX took about six weeks to install 33 Raptor engines and associated heat shielding on Booster 7, while installing six Raptors and wrapping up a few other aspects of Ship 24 took about four weeks.

Aside from the installation of most of the Starship’s missing heat shield tiles, Ship 24’s preparations did include one particularly unique step involving its payload bay prototype. SpaceX’s first stab at a Starship payload bay has been likened to a giant Pez dispenser, which is not entirely inaccurate. Exclusive to Starlink, satellites will be stored on a rectangular rack that’s assumed to operate like an elevator. As an unknown mechanism pushes two satellites at a time through Starship’s slot-like bay door, the stack of satellites will feed downwards like bullets in a magazine until the full set is fully deployed.

In late June, SpaceX attached a giant white box to a crane and positioned the box to interface with Ship 24’s bay door, where it hung for the better part of a day. The test confirmed speculation that the box was meant to solve perhaps the most obvious problem SpaceX’s unique payload bay design posed: payload installation. SpaceX’s solution appears to involve using the deployment mechanism in reverse, with the white box conveying Starlink Gen2 satellites through the ‘slot’ and the dispenser grabbing and lifting each pair up into the bay.

It’s possible that Ship 24 will have a handful of Starlink V2/Gen2 satellites loaded into its bay if it passes its next tests. Before being cleared for flight, Ship 24 will need to complete at least one nominal wet dress rehearsal (simulating every aspect of a launch short of engine ignition) and one six-engine static fire, though several tests are far more likely. Starship S24’s test campaign will benefit significantly from Starship S20, which survived extensive testing (and multiple six-Raptor static fires) in 2021. In comparison, Super Heavy B7’s similar wet dress rehearsal and static fire test campaign will be almost entirely new to SpaceX, save for a single three-engine static fire completed by an outdated booster prototype last year.

SpaceX could attempt to static fire Booster 7 for the first time as early as Wednesday, July 6th. It’s unclear if the company will attempt to kick off Ship 24’s next round of testing in the gaps between Super Heavy B7’s static fire testing. While unlikely, SpaceX is technically capable of testing Ship 24 and Booster 7 simultaneously.