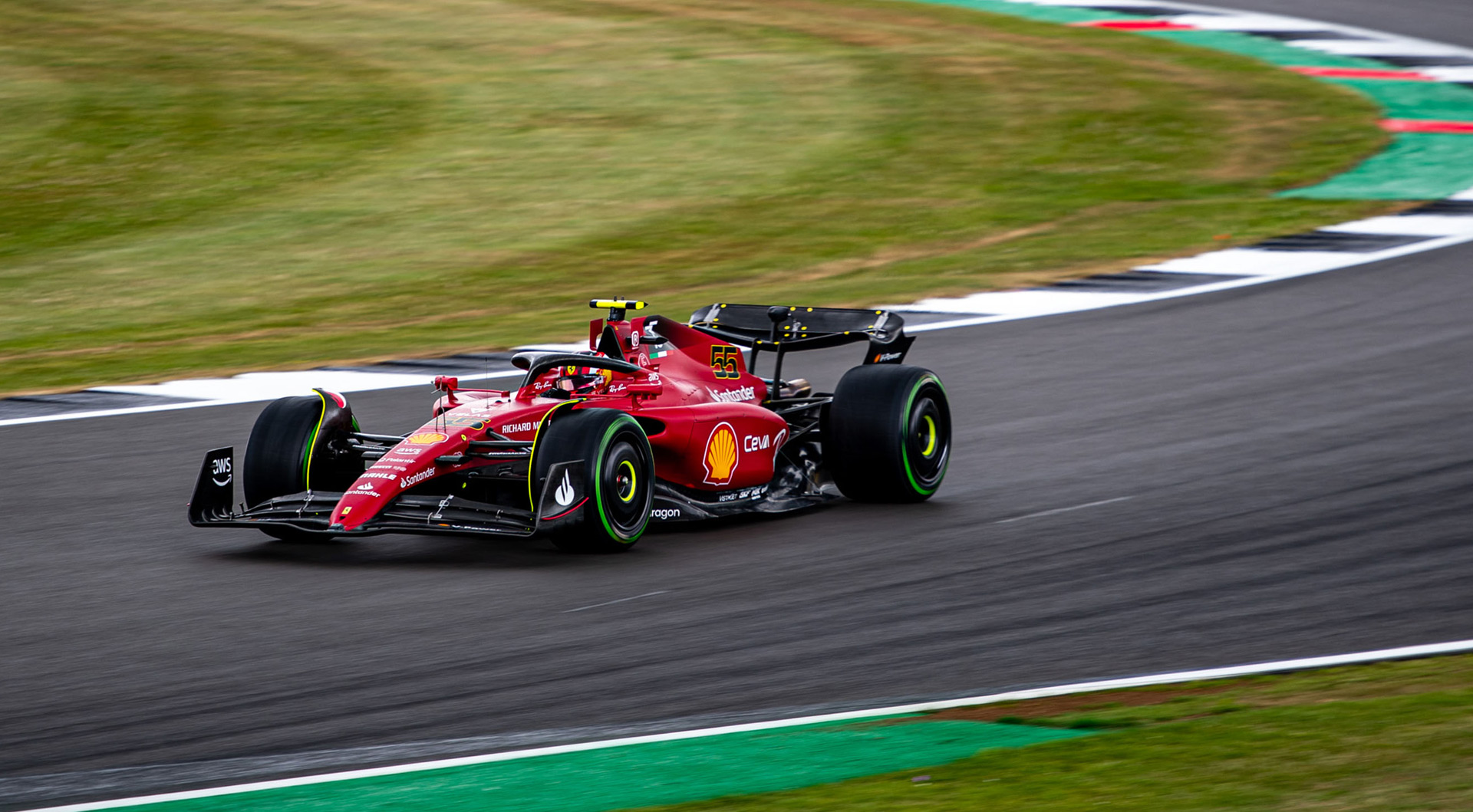 It wasn’t an easy feat for Sainz despite having started on pole, with an early red flag and Red Bull Racing’s Max Verstappen also providing a strong challenge in the first half of the race. The red flag was caused when Mercedes’s George Russell came into contact with AlphaTauri’s Pierre Gasly at the start of the race.

The impact violently pitched Russell’s Mercedes into the Alfa Romeo of Zhou Guanyu, which caused the Alfa to flip over and slide right off the track and through the gravel trap where it was launched over the tire barriers into the catch fencing. Guanyu was able to walk away from the crash and was later given the all clear.

Williams’ Alex Albon was behind the action and slowed down immediately, which resulted in Aston Martin’s Sebastian Vettel hitting the rear of Albon’s car and sending it into the wall on the right side of the pit straight. He bounced back into the path of AlphaTauri’s Yuki Tsunoda and Alpine’s Esteban Ocon. Albon was also unharmed by the crash.

At the restart, Sainz and Verstappen were fighting at the front, with Perez and Ferrari’s Charles Leclerc behind them. Leclerc was able to pass Perez though damaged the front wing of his Red Bull in the process, causing Perez to pit. The Red Bull driver then had to rejoin the race at the back of the grid. 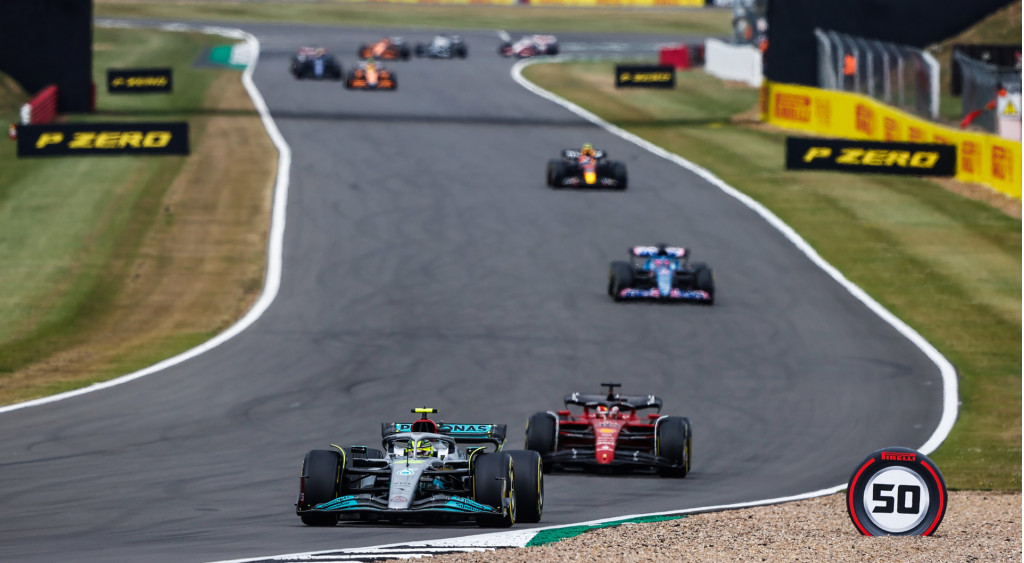 A few laps later, Verstappen would drive over some debris after running wide at Copse, causing damage to the floor of his car and slowed performance. Thinking he had sustained tire damage, Verstappen pitted for fresh tires but the floor damage was the culprit and the reigning champion would have to continue on with the slower pace.

At the front, the battle between race leader Sainz and Leclerc became tense as Leclerc demanded to be allowed to pass his teammate and that allowed Hamilton to close to within three seconds of the lead. Ferrari’s solution was to pit Sainz to cover Hamilton and to give Leclerc a chance to outpace Hamilton. Sainz eventually rejoined in third place. Meanwhile Perez was fighting his way up the order, making fast ground as others around him made pit stops.

Leclerc made his first stop at the midway point of the race, resuming behind Sainz. That handed the lead to Hamilton and gave him an opportunity to stretch his legs before his own pit stop. After building up a decent gap, Hamilton finally made his way to pit lane. But the Mercedes driver’s stop was a slow four seconds and he emerged behind Sainz in third place.

Later, Alpine’s Esteban Ocon would stop on the track, causing the safety car to come out. At this point, Ferrari brought Sainz into the pits while leaving race-leader Leclerc out due to his fresher tires. However, Leclerc struggled to get his tires back up to temperature at the restart and was passed by Sainz, as well as Perez and Hamilton. Leclerc thus had to settle for fourth place at the end, with Alpine’s Fernando Alonso rounding out the top five. Verstappen finished seventh, behind sixth-placed Lando Norris of McLaren.

The next race on the calendar is round 11, the Austrian Grand Prix, this coming weekend. 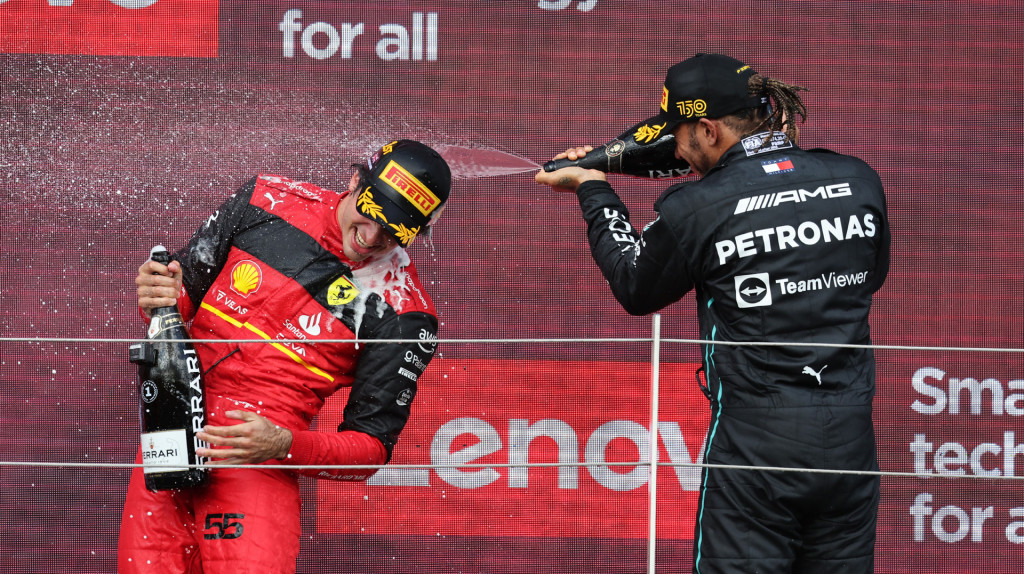 Below are the full results from the 2022 Formula 1 British Grand Prix: