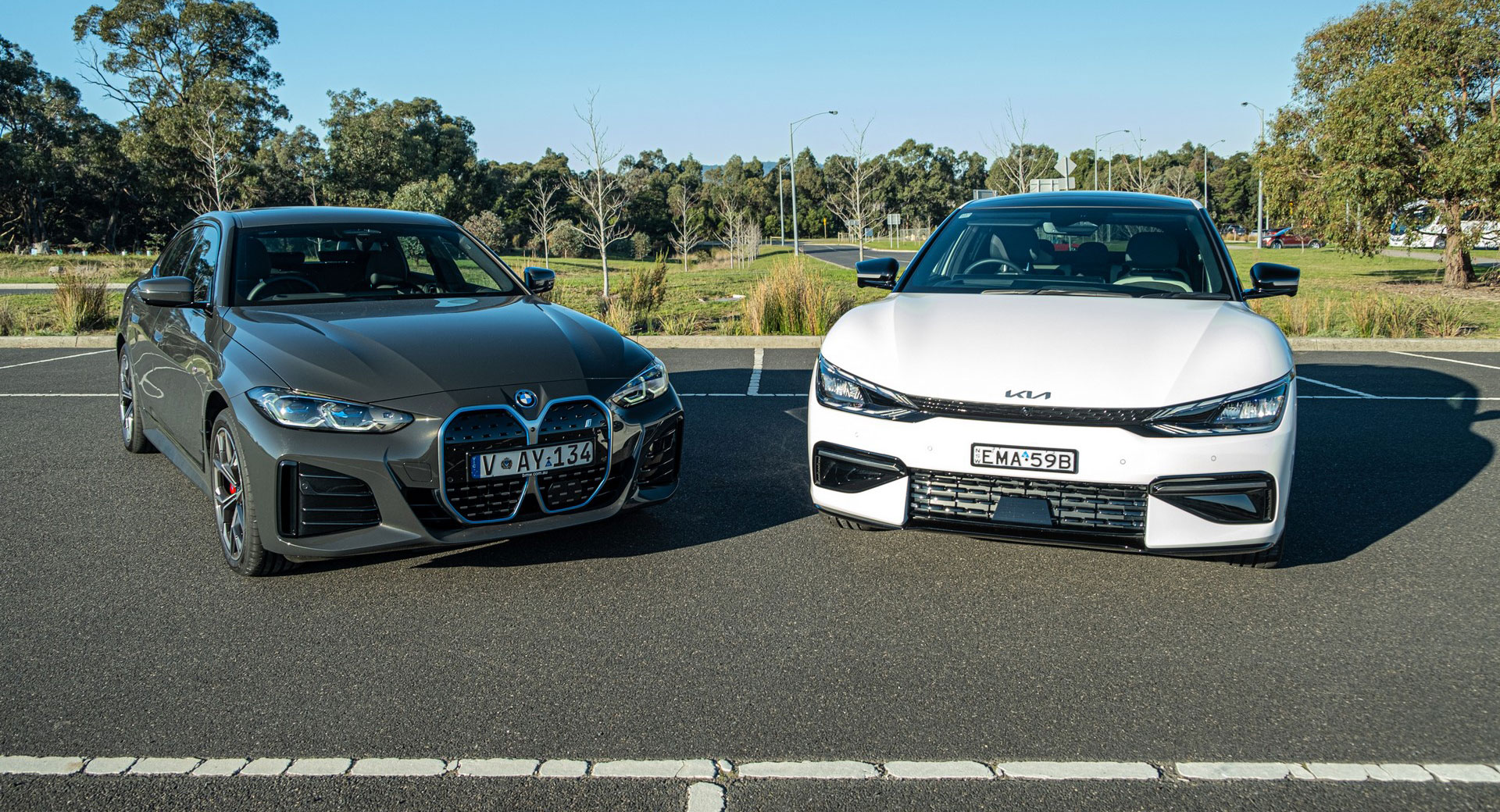 The BMW i4 and Kia EV6 GT-Line AWD are not the most traditional of rivals. After all, it would have been inconceivable just five years ago that a Kia would be rivaling BMW with a compelling new electric vehicle that is cheaper but loaded with just as many features. Well, apparently things have changed.

A few weeks ago, we put the 2022 i4 eDrive40 through its paces and walked away very impressed. While we had it, we also picked up the keys to an EV6 GT-Line AWD. While the two have a lot of differences, they also have a number of key similarities, and we suspect there will be some cross-shopping between the two.

It goes without saying that most BMW owners won’t consider a Kia if they are looking to pick up the keys to a new EV. Additionally, the i4 is based around the 4-Series Gran Coupe, essentially meaning it is a traditional sedan with a slightly sleeker roofline. The EV6 is much less traditional, taking the shape of a mix between a sedan and an SUV, carving out a niche segment of the market that’s also occupied by the Hyundai Ioniq 5. So, while these two are quite different, the electric vehicle market is still small in Australia, meaning most EVs could be considered as rivals to one another. 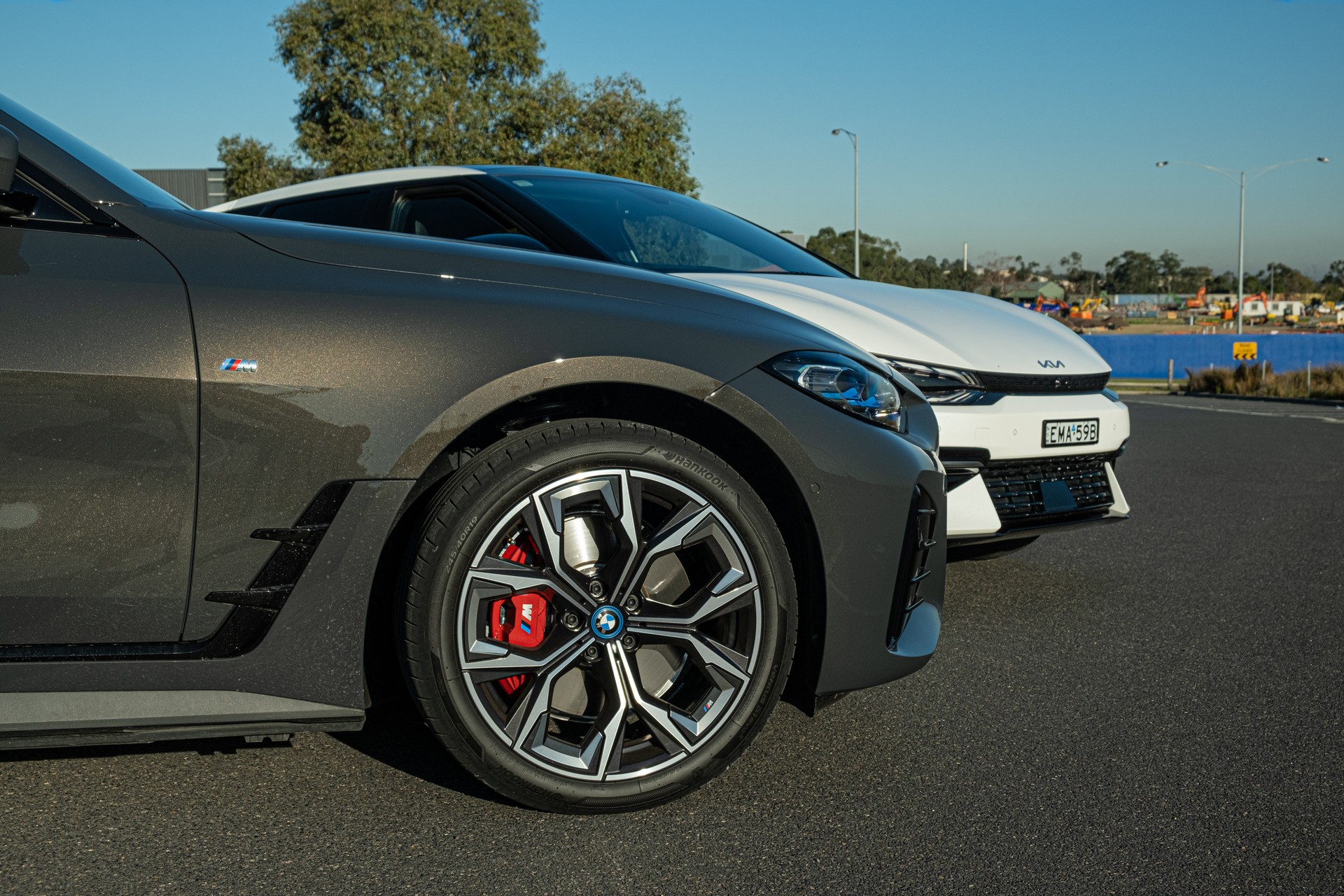 The i4 and EV6 couldn’t look any different. As mentioned, they adopt different body styles and it’s the BMW that is the more traditional of the pair. Ignoring the kidney grilles, we think it’s quite a sleek-looking sedan, and were particularly fond of the aggressive laser headlights and the M package trimmings that our test car came with, including the two-tone 19-inch wheels.

The Kia EV6 makes a more dramatic statement on the road and of the two, it is the car that turned more heads. In fact, one particularly excited pedestrian visibly gasped and stared at the Kia intently as we drove past one chilly afternoon. The BMW does not attract the same attention.

Which of the two looks better? We’ll let you be the judge of that. 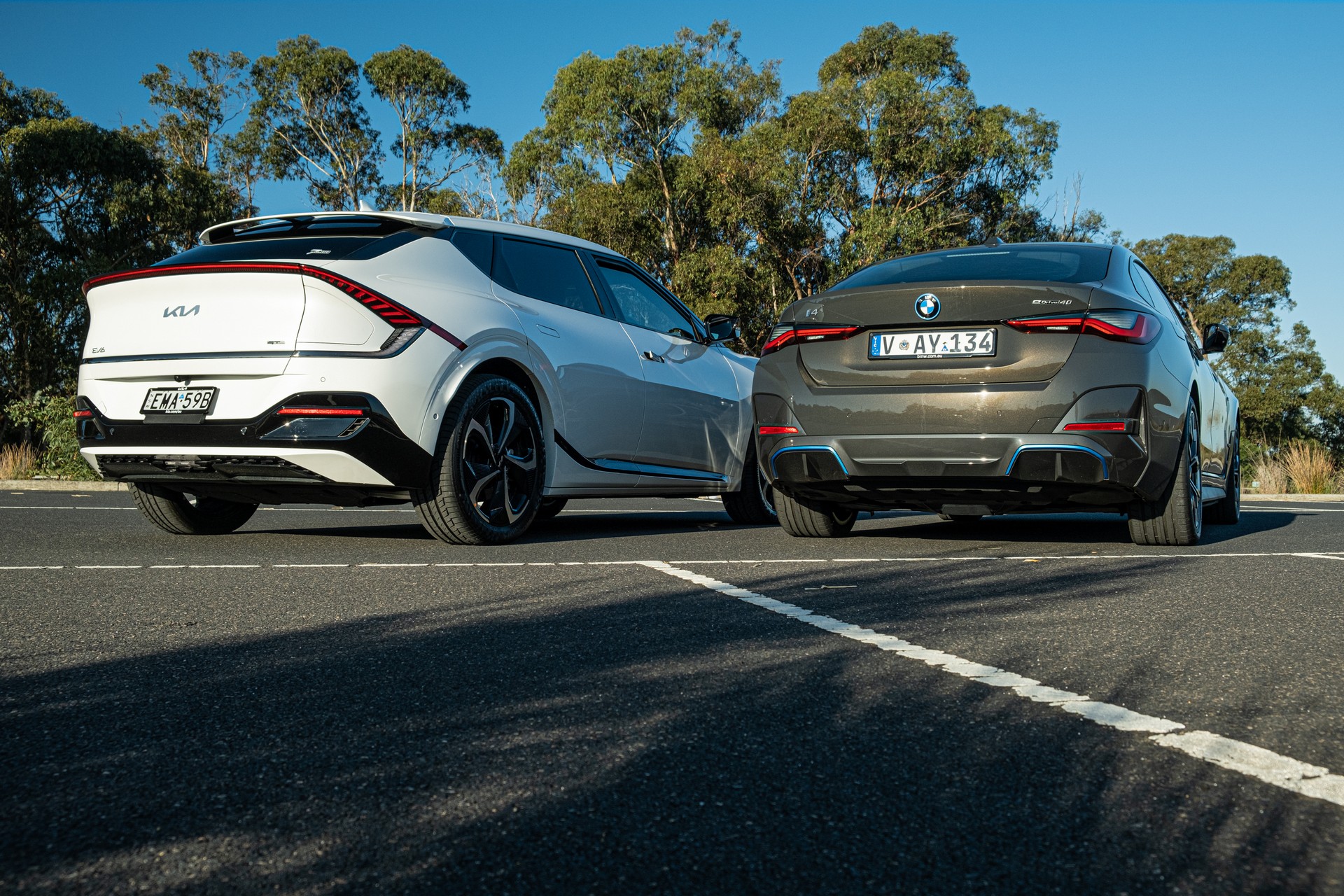 The BMW i4 is based around the 4-Series Gran Coupe, meaning it has a fairly traditional interior layout and retains a large transmission tunnel. This makes the cabin feel tighter than the Kia but for those sitting in the front, it offers plenty of room. For us, the highlight of the cabin was BMW’s new Curved Display.

Consisting of a 12.3-inch digital instrument cluster and a 14.9-inch infotainment screen housed in a wonderful curved glass display, the arrangement exudes sophistication and feels very modern. The latest BMW Operating System 8 is also featured. This software is extremely responsive to the touch, the graphics and clear and exciting, and there is lots of scope for customization thanks to the available widgets. It is a class above the displays of the Kia and includes wireless Apple CarPlay and Android Auto. 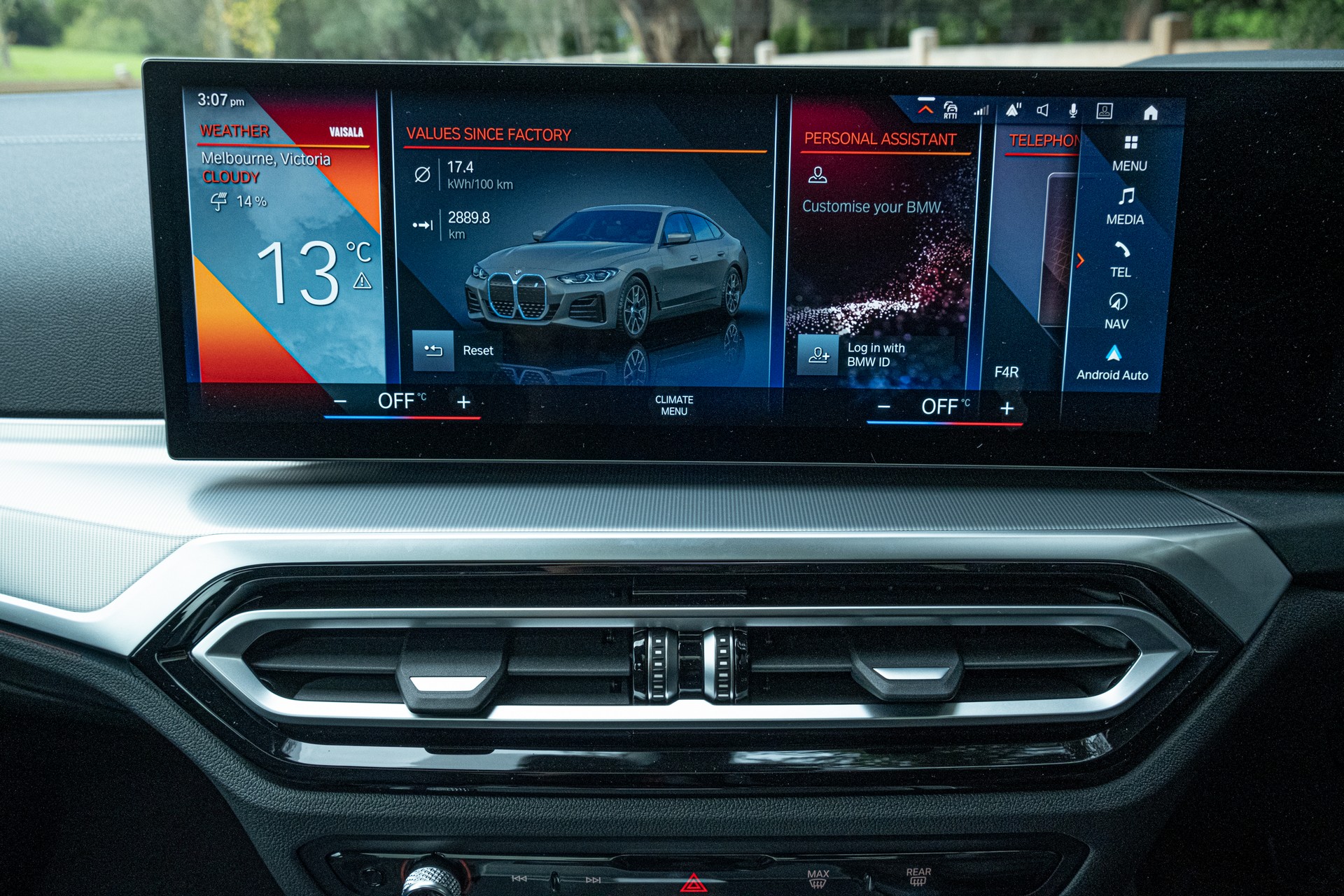 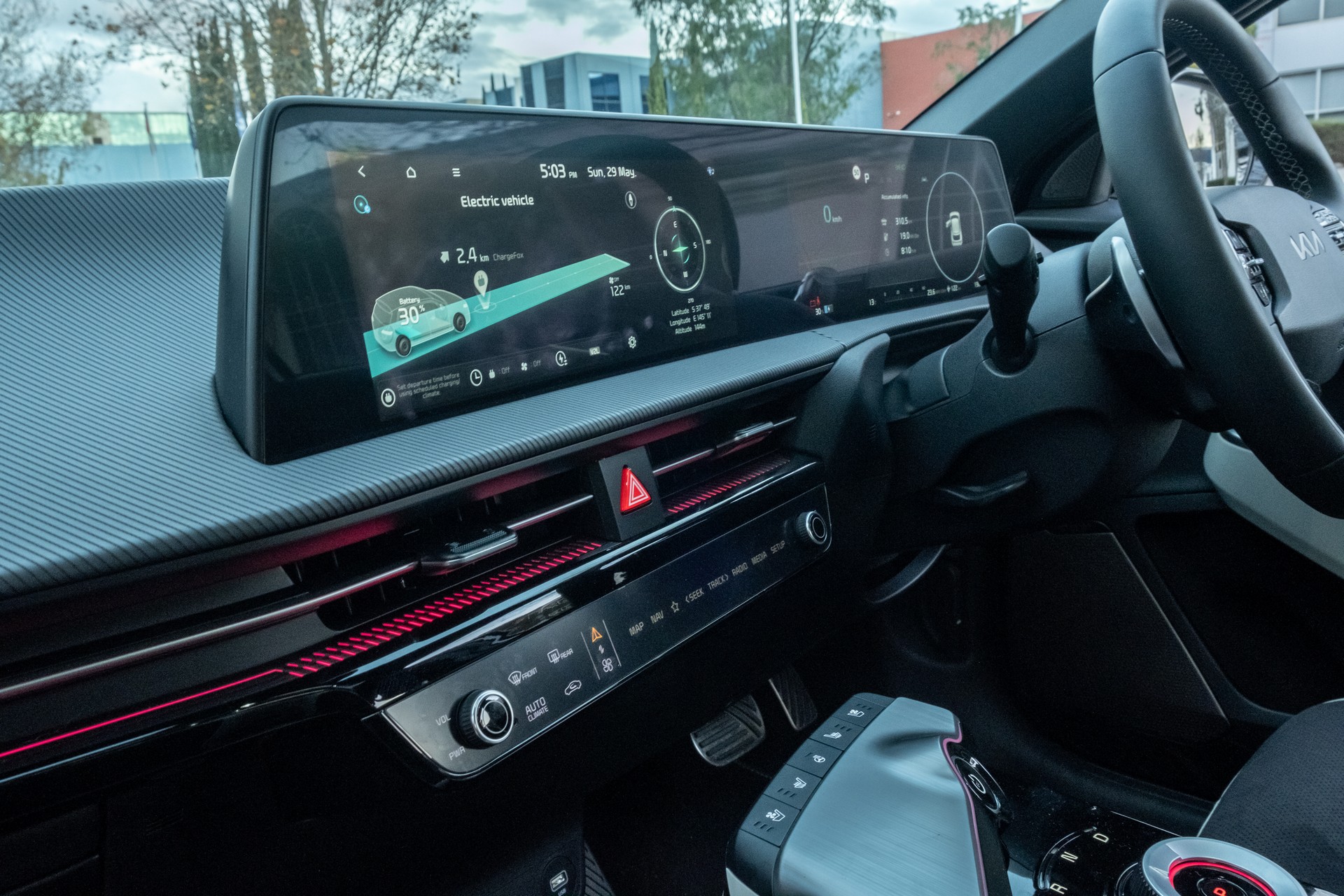 As far as Kias go, the EV6’s dual 12.3-inch displays are as good as it gets. They are housed in a similar curved arrangement to the i4. However, the screen is not as responsive and the software seems certifiably basic compared to the BMW’s. It also feels a little bland and lacks the complex and immersive graphics of the i4.

Nonetheless, tere are areas where the cabin of the EV6 GT-Line AWD has the advantage over the i4 eDrive40. For one, the flat floor makes it much more spacious, although the presence of a sunroof on our press car meant it actually had less headroom for drivers than the BMW. You sit much higher in the Kia than you do the BMW and while the materials don’t feel quite as nice as in the Bimmer, they aren’t far behind. The overabundance of piano black plastic is a shame, though.

The Kia has some other things going for it, including the more configurable ambient lighting system, the presence of heated and ventilated seats which the i4 lacks, a heated steering wheel, and USB-C chargers in the front seatbacks.

With the exception of the i4’s excellent Curved Display, we preferred the interior of the EVG GT-Line AWD. That’s impressive for a car that costs so much less. 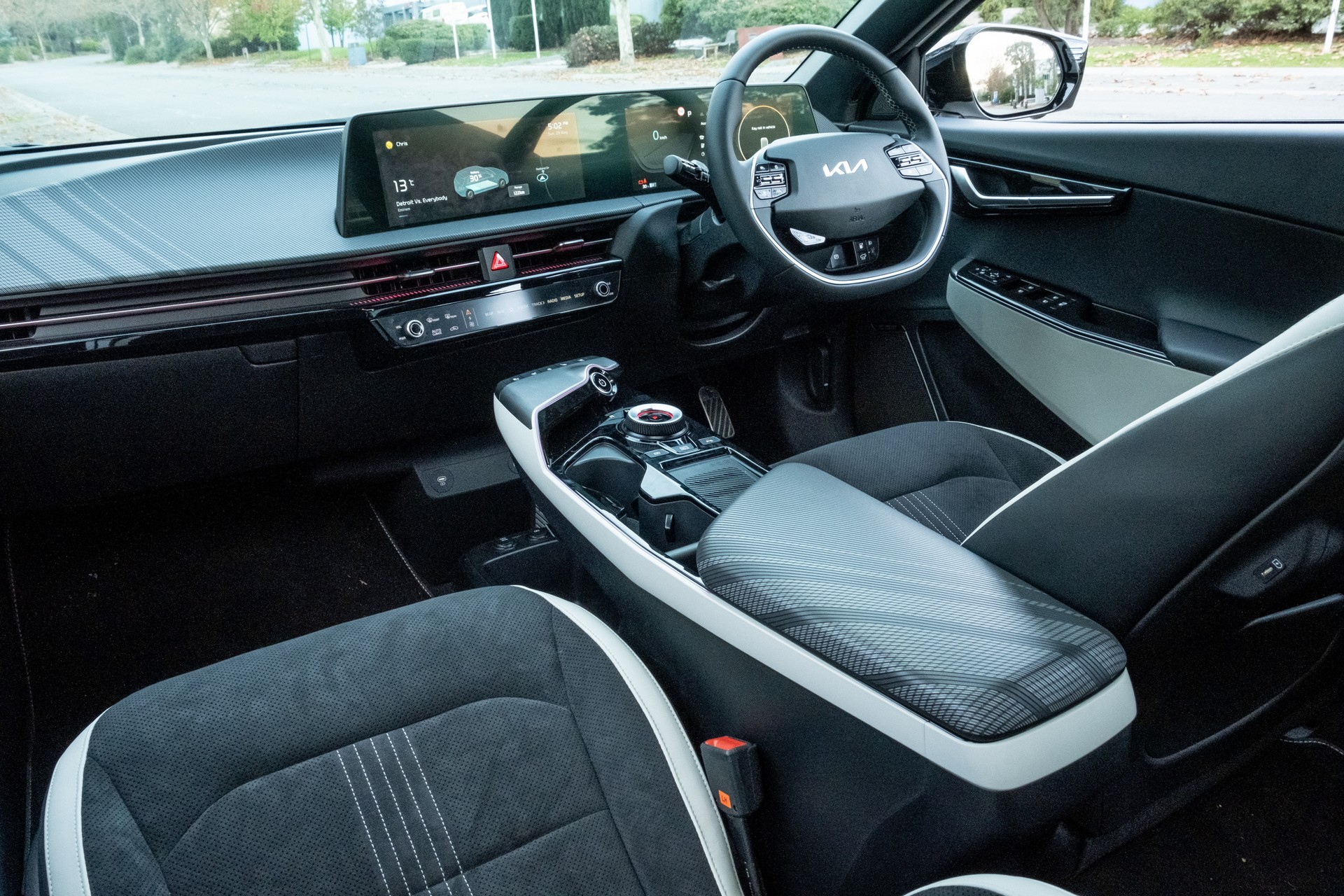 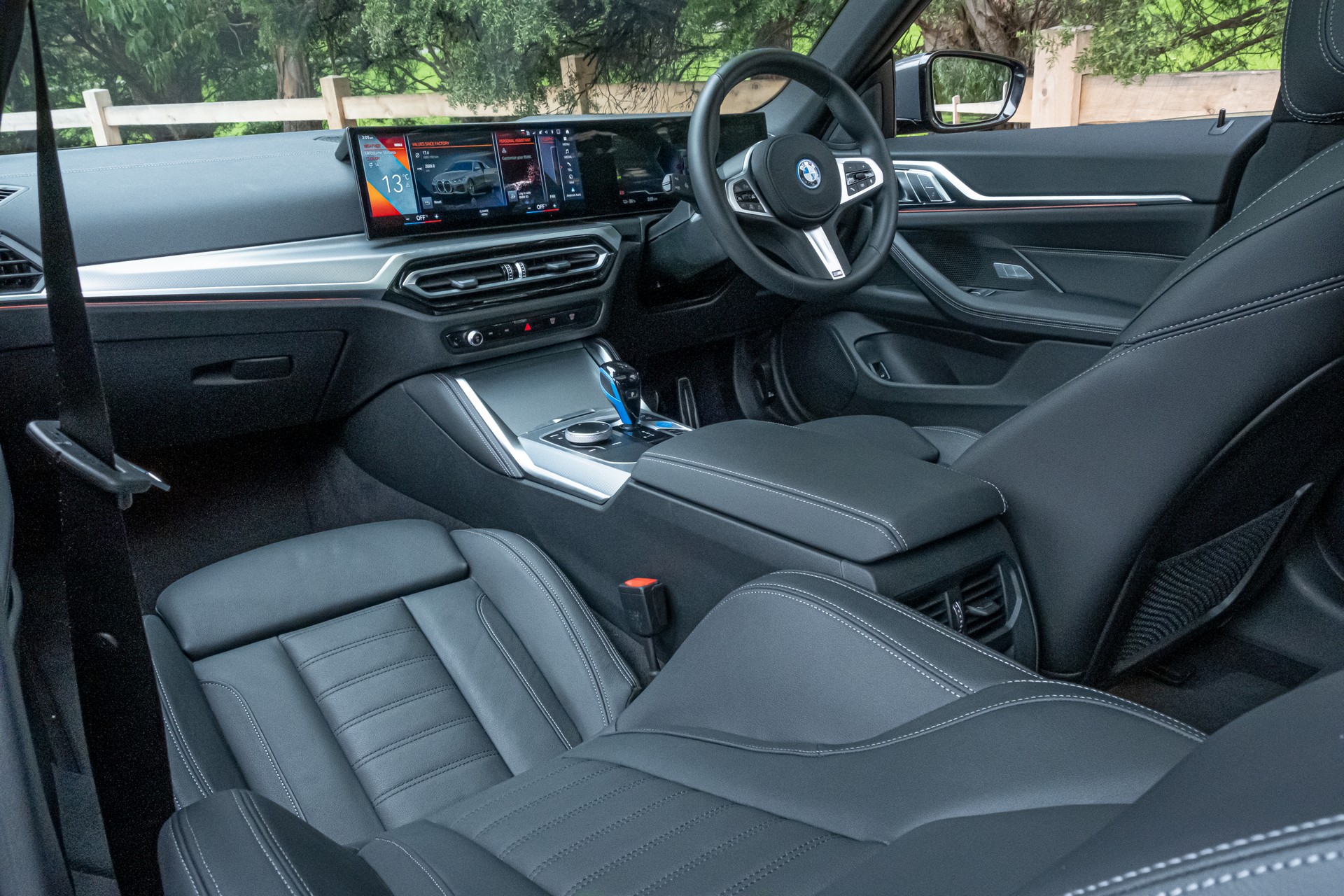 Admittedly, it’s not an apples-to-apples comparison in comparing the eDrive40 to the all-wheel drive EV6 GT-Line. After all, the latter has two electric motors. However, given that it develops 239 kW (320 hp) and 605 Nm (446 lb-ft), there isn’t a huge chasm between their performance, with the EV6 needing 5.2 seconds to hit 100 km/h. In a straight-line then, there’s not much between them but the differences appear elsewhere. 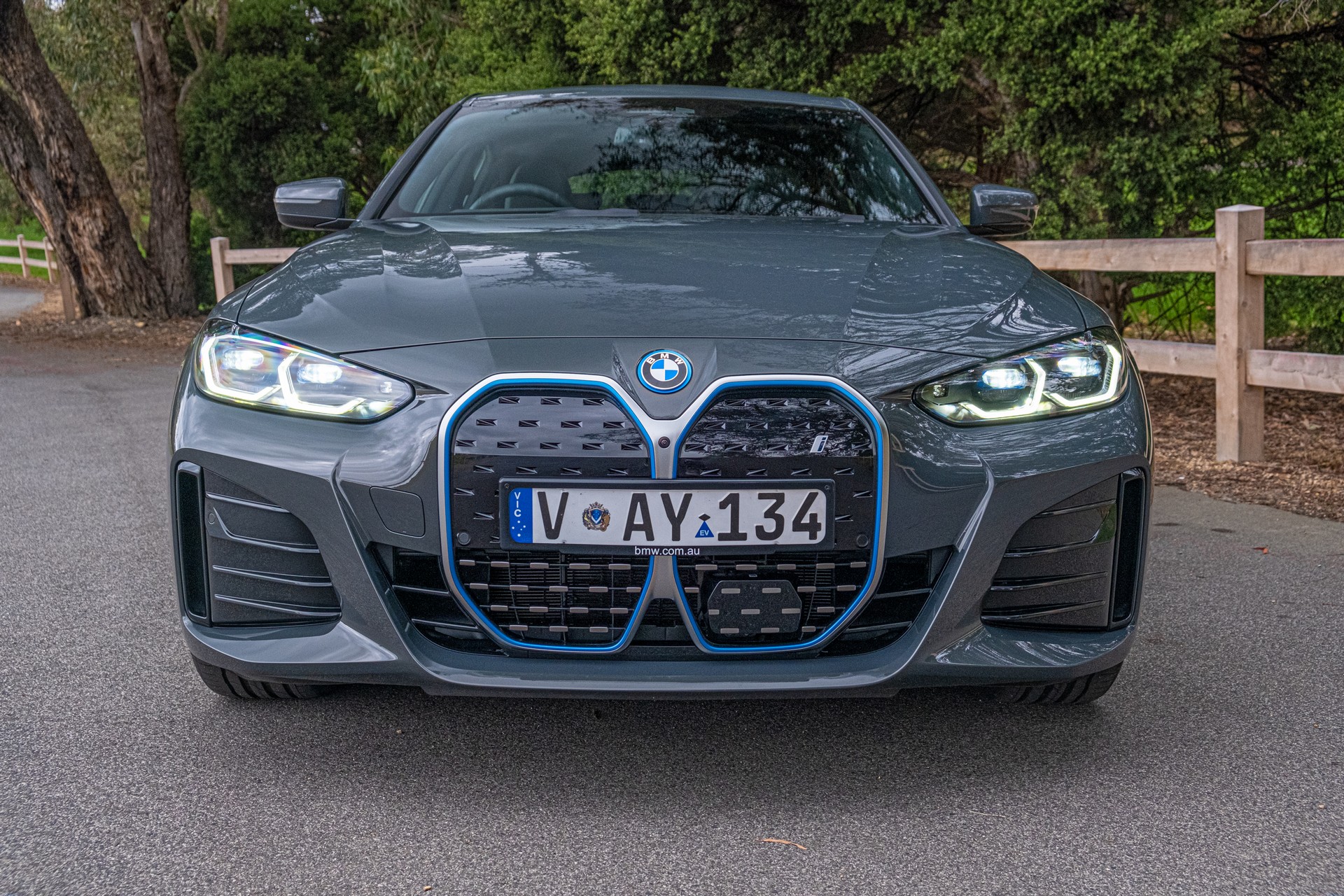 From the moment you set off in the i4 eDrive40, it feels much more hunkered down and sporty than the EV6. This is no surprise given its smaller size but the differences are starker than you may expect. Everything feels more precise, particularly the steering, and the suspension seems better suited to Australian roads, offering an excellent compromise between sportiness and comfort. The EV6 GT-Line AWD feels like it floats and wallows over the road whereas the BMW feels nothing of the sort. For spirited driving, it is easily the better of the two.

There are some areas where the EV6 pulls back. For one, its brakes are more predictable than the BMW’s and the transition between the regenerative and the mechanical brakes is much smoother, verging on seamless. The transition of the i4’s brakes is abrupt and rough by comparison.

Speaking of the regenerative brakes, that’s another area where the EV6 excels. Not only does it offer a one-pedal driving mode, something that the i4 doesn’t, but the presence of paddle shifters means you can adjust the level of regen on the fly. Drive the BMW and you will only be able to adjust the regen settings by tapping through multiple menus on the infotainment screen. 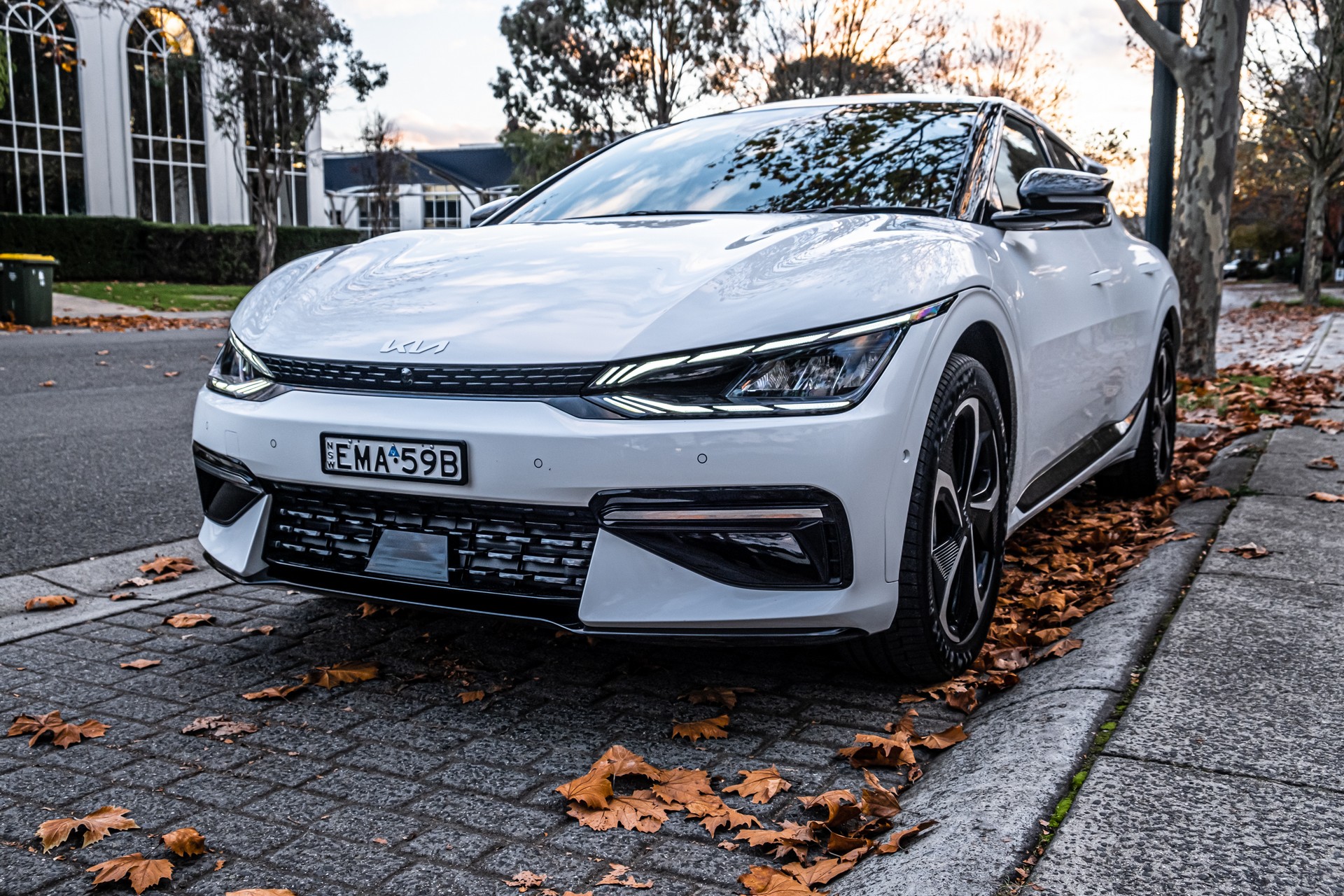 This is an easy win for the EV6. It is underpinned by the Hyundai Group’s E-GMP architecture with 800-volt technology and can charge at speeds of up to 350 kW. That means it can be topped up from 10 to 80 per cent in just 18 minutes. By comparison, the i4’s ICE underpinnings mean it is capped at a peak charging speed of 200 kW and takes 31 minutes to go from 10 to 80 per cent.

Where the BMW does have an advantage is in range. The i4 eDrive40 has a claimed WLTP range of 590 km (366 miles) compared to the EV6 GT-Line AWD with its claimed 484 km (300 miles). This largely comes down to the fact that the Kia has a 77.4 kWh battery while the i4 eDrive40e has a larger 84 kWh battery. Our testing of the two found the Kia to be slightly more efficient as we averaged 20.5 kWh/100 km during our testing compared to the 23.0 kWh/100 km of the i4, results achieved across a similar mix of city and highway driving. We didn’t test the two back-to-back over exactly the same route and in the same weather conditions, so these figures will certainly vary for customers. 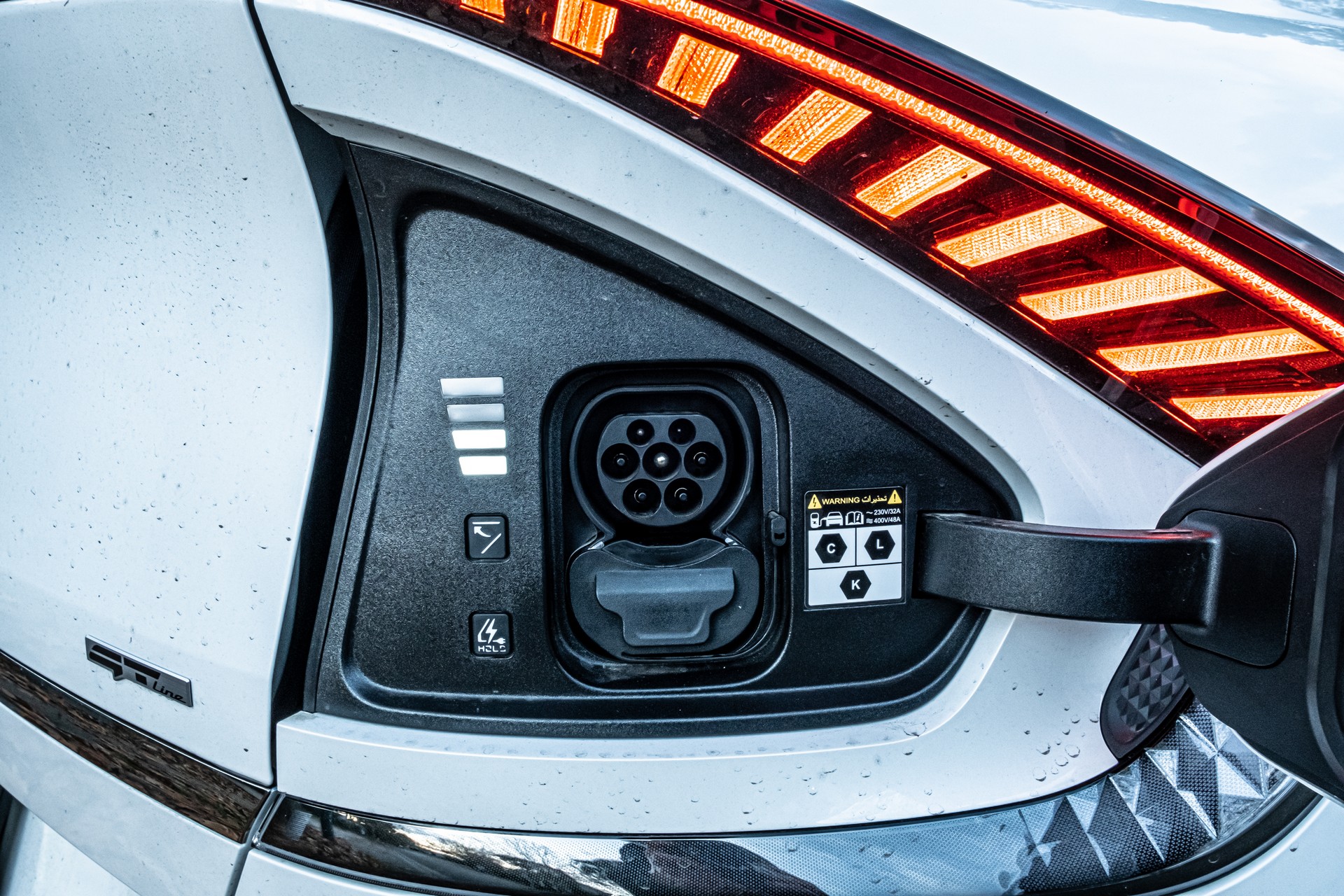 All BMW i4 eDrive40 models sold in Australia come with five years of free charging across the Chargefox network. The EV6 does not offer such a perk.

So, which one should I buy?

Both the BMW i4 eDrive40 and Kia EV6 GT-Line AWD are excellent EVs and occupy different positions in the ever-growing market. As such, a solid case can be made for both of them, depending on what a consumer is looking for. If you’re in the market for an EV with a premium feel that’s sporty to drive while still remaining comfortable, the i4 eDrive40 is an excellent choice. Those looking for something slightly larger and willing to sacrifice some agility should put the EV6 GT-Line AWD at the top of their shopping list. For us? The EV6 takes the win as it is better value for money and will suit more buyers than the i4. 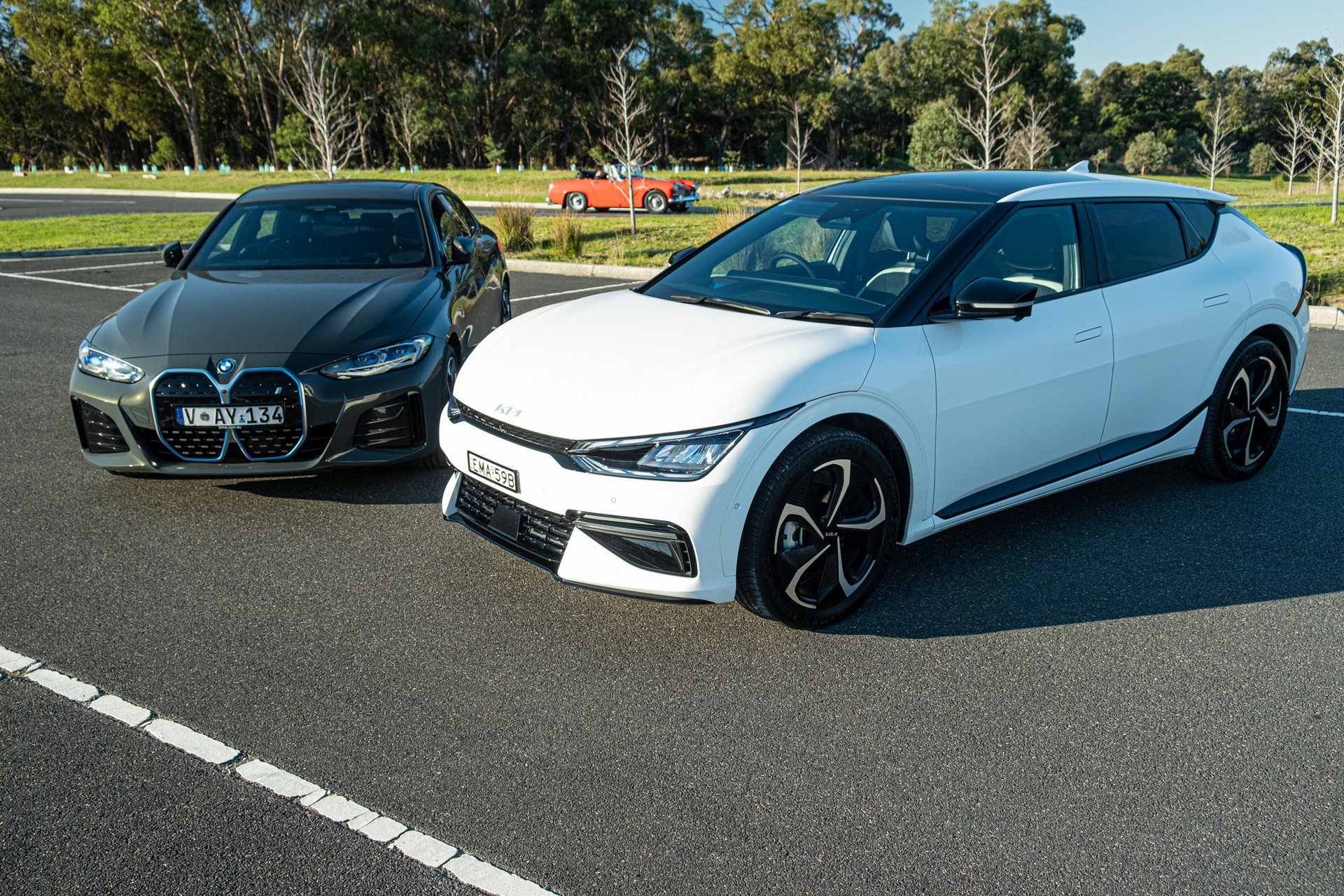