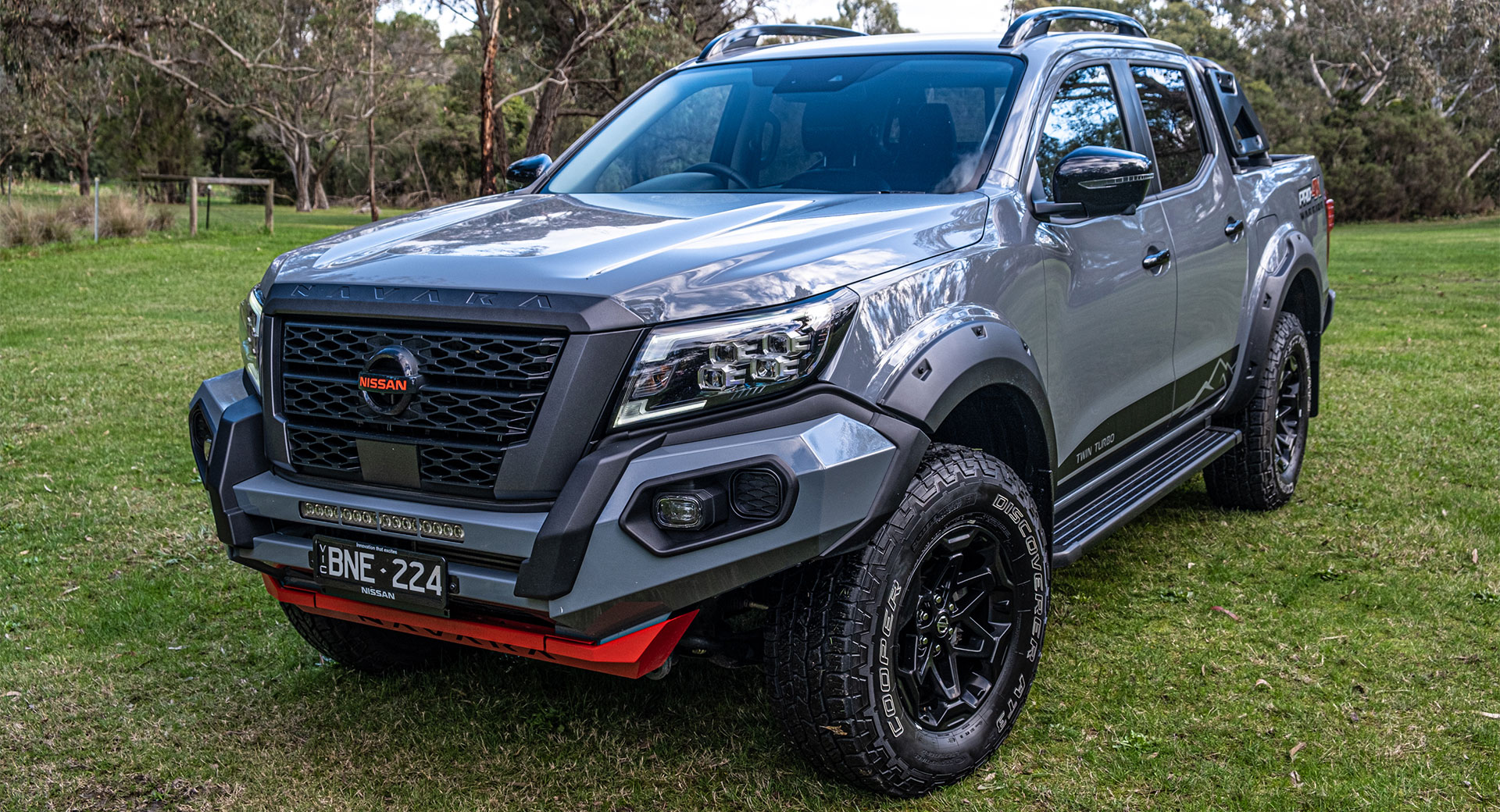 Australian buyers absolutely love pickup trucks, particularly ones that make a bold statement on the road. And, as far as statements go, the new Nissan Navara Pro-4X Warrior certainly makes a very big one.

This flagship variant of the facelifted Navara was unveiled by Nissan Australia in mid-2021 and serves as the replacement to the pre-facelift Navara N-Trek Warrior. It rivals the likes of the Toyota Hilux Rugged X and the Ford Ranger Raptor as a rough-and-ready vehicle that’s just as well suited to highway cruising as it is blasting along a gravel road or ascending a steep off-road trail.

Like the N-Trek Warrior that it replaces, the Navara Pro-4X Warrior does not leave the factory looking like this. Instead, it is extensively modified by local engineering firm Premcar and then shipped to Nissan dealers. 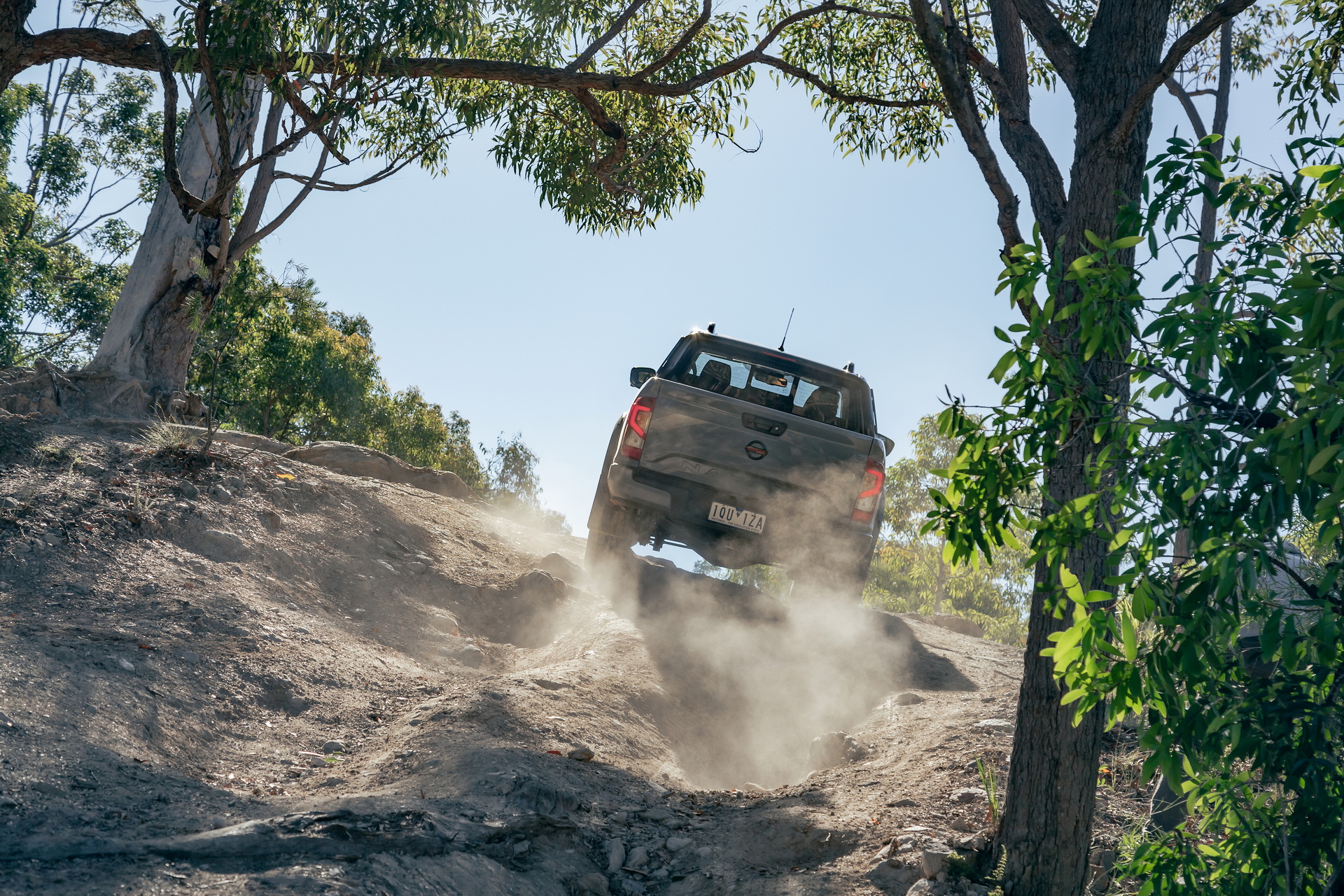 A truck that’s hard to ignore

Premcar’s upgrades start under the skin with new suspension components, providing the Nissan with 40 mm (1.5-inches) of additional ground clearance. High-speed rebound and compression rates have also been increased by 50 per cent and 100 per cent respectively. Nissan’s claim is that these changes result in a softer and more compliant ride.

Look beyond the altered suspension and you will notice black 17-inch wheels with 275/70 Cooper Discover All Terrain AT3 tires. Premcar has also equipped the flagship Navara with a bright red skid plate up front, underbody dash plates, revised bump stops, and a winch-compatible bulbar.

In Australia’s market of rugged pickup trucks like this, few make quite the same impression as the Warrior although the Hilux Rugged X, complete with its snorkel, does come close. 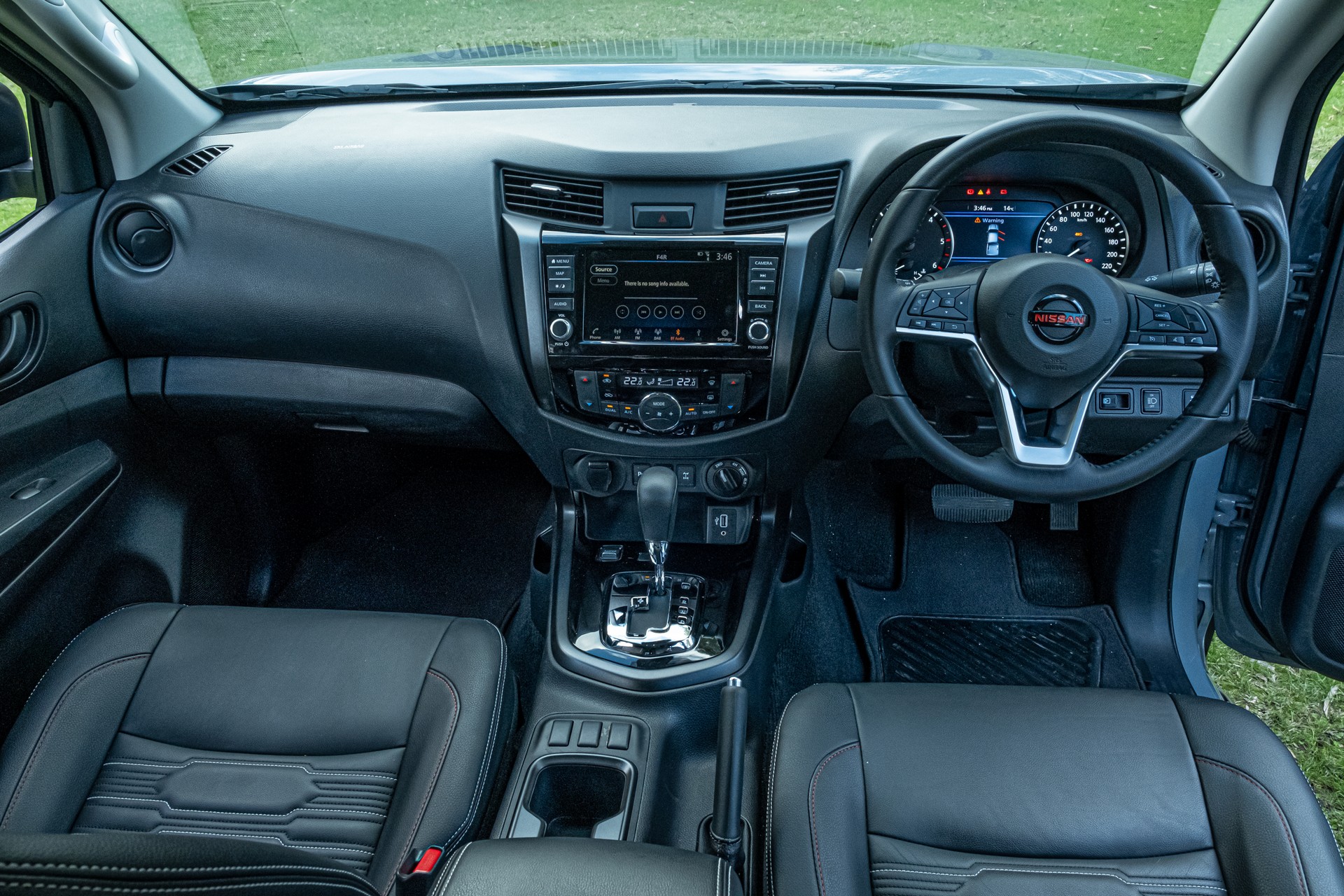 In refreshing the Navara for the 2021 model year, Nissan did make a number of welcome updates to the cabin. However, it is starting to show some signs of aging.

Taking pride of place in the center of the dashboard is the car manufacturer’s outgoing 8.0-inch infotainment system. This system is the same as found across much of the Nissan range but has been updated in its latest generation of vehicles, such as the Qashqai and X-Trail / Rogue. While the system works well and is both easy to understand and operate, the touchscreen isn’t particularly responsive and the software feels dated. We do like the automaker’s decision to retain a healthy number of buttons and dials, however. 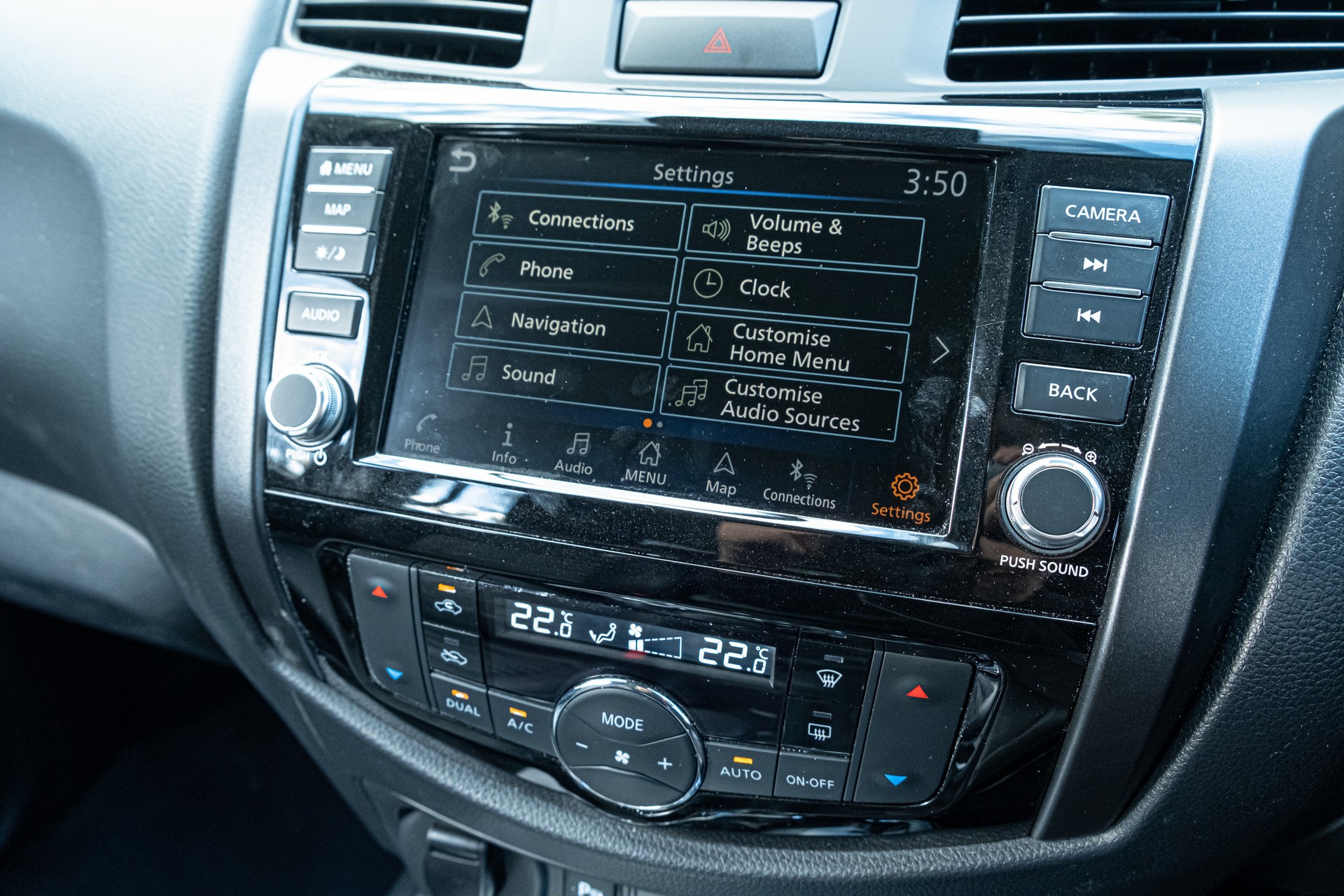 Nissan has given the facelifted Navara an updated gauge cluster that retains two traditional dials but has a larger central display that shows key vehicle functions. This setup is a definite improvement over the pre-facelift model. The presence of a new three-spoke steering wheel complete with black plastic buttons and a black Nissan badge is also most welcome.

Compared to the pre-facelifted N-Trek Warrior that we tested two years ago, this updated model also has a set of different seats trimmed in plusher leather and without the overbearing orange seat centers of the older model. Curiously, the heated seats have been removed for this new model, meaning there are now three blank switches on the transmission tunnel. Another disappointing part of the interior is the low-resolution reversing camera. 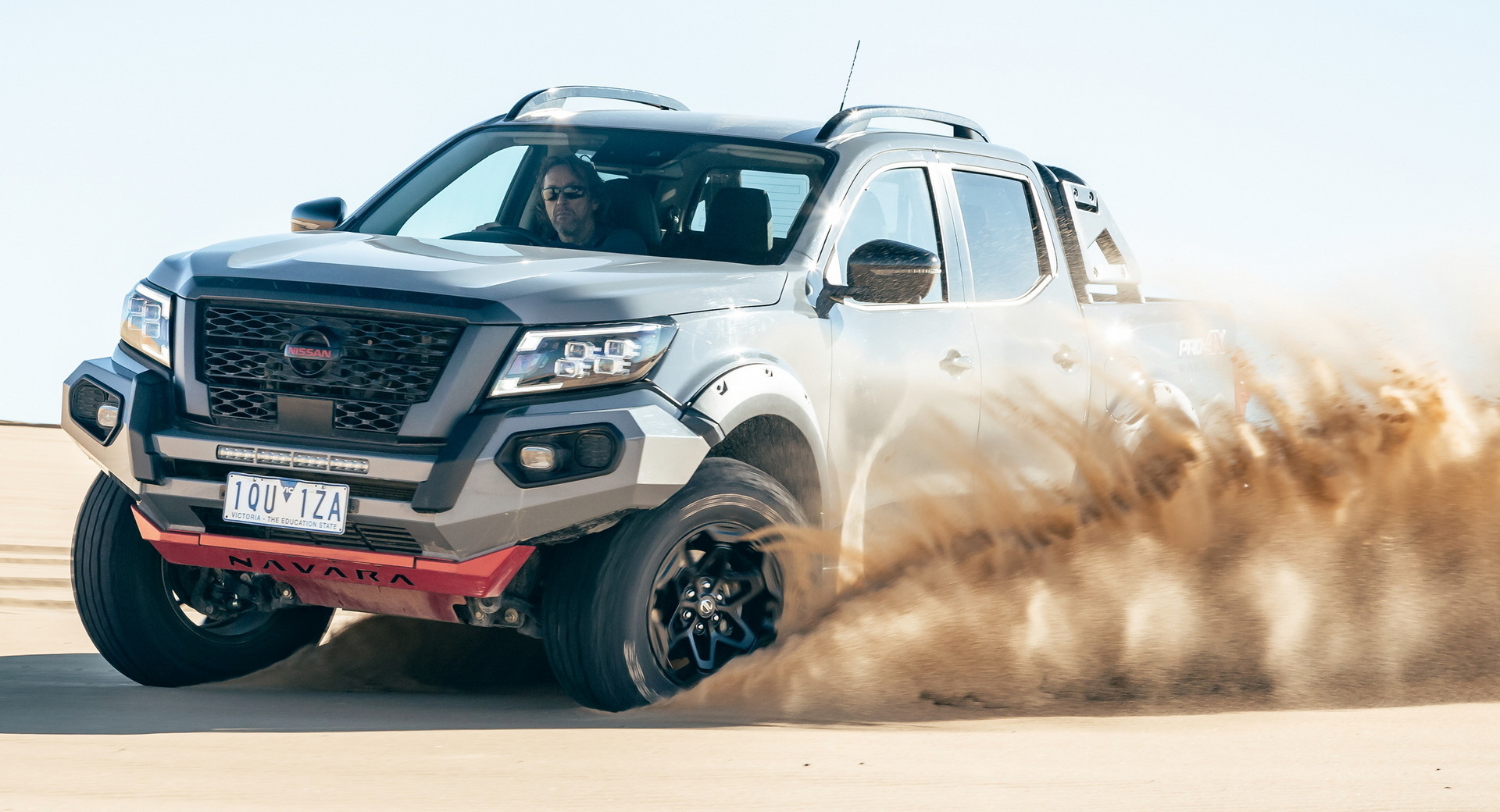 A familiar engine and experience

No changes have been made to the new Warrior’s powertrain. As such, it sports the same twin-turbo 2.3-liter diesel engine as the older model, complete with 140 kW (187 hp) and 331 lb-ft (450 Nm) of torque. This engine is coupled exclusively to a seven-speed automatic transmission.

We spent a week with the Navara Pro-4X Warrior, testing it through city streets, country roads and highways, and along a number of off-road trails. Much like the previous model, we were left impressed.

The engine suits the Navara very well. Sure, it will prove to be no match for the latest-generation Ford Ranger Raptor with its twin-turbo 3.0-liter V6 muscling out 292 kW (391 hp) and 583 Nm (430 lb-ft) of torque, but let’s be honest, having that much power in a truck of this size is overkill. On the highway, the Navara’s engine has enough pulling power to make overtaking a breeze, even though the transmission can feel a little lazy at times. As if often the case with diesels, the 2.3-liter does start to lose some steam as the revs build. 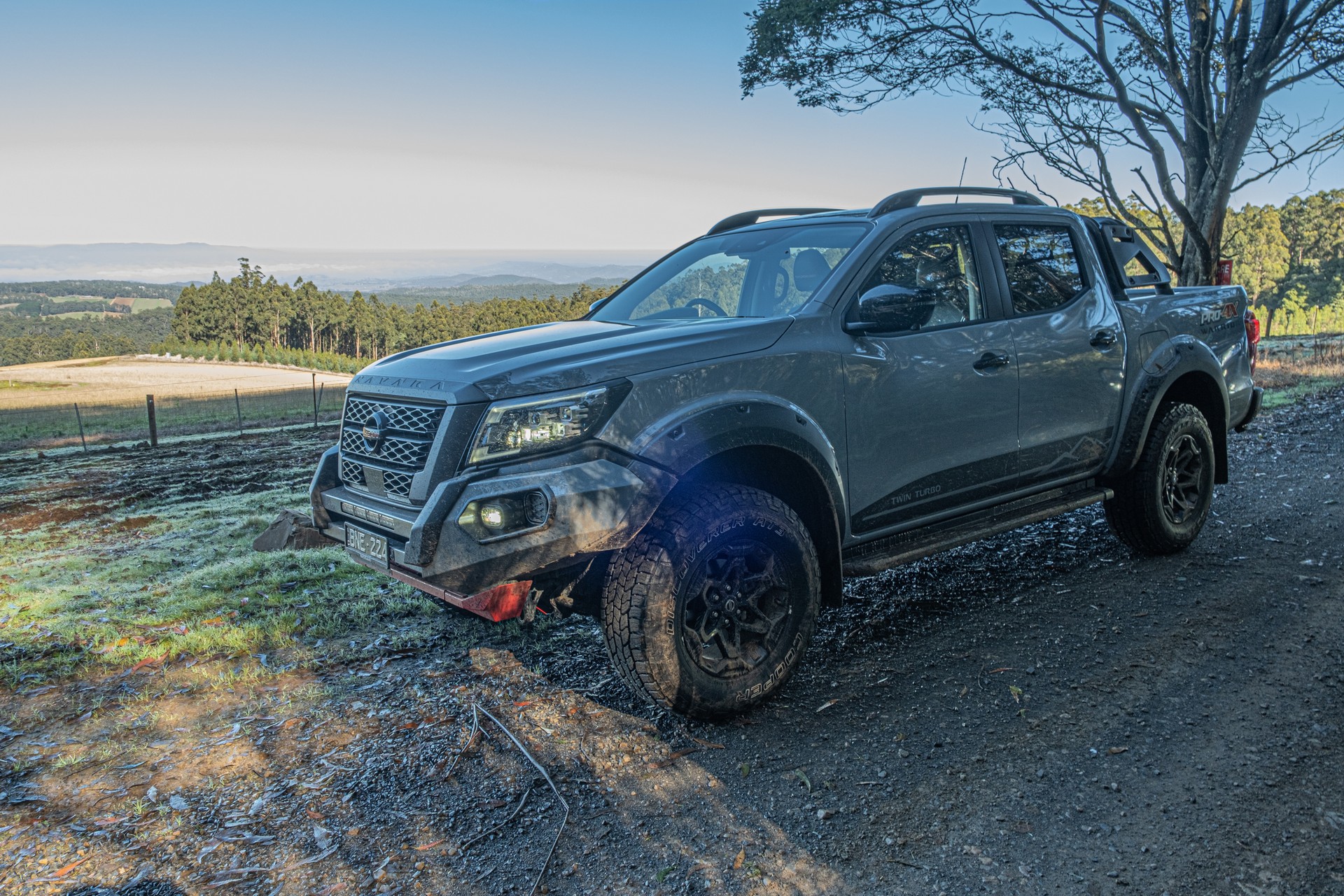 The most obvious difference between the new Warrior and the ‘regular’ Navara N-Trek that we tested last year is the quality of the ride.

Make no mistake, the ride of the normal Navara N-Trek is good. However, the Warrior is noticeably more comfortable and far less harsh, making long highway jaunts that much more enjoyable. Premcar has also managed to ensure that the steering remains positive and sharp despite the increased ride height.

And how about off-roading?

The vast majority of Navara Pro-4X Warrior models delivered in Australia will spend most of their time being driven between worksites by the tradesmen that traditionally own them. However, for those brave enough to head off the road and along some difficult trails, the Warrior feels right at home there too.

Like lesser variants of the Navara, the Pro-4X can be driven in 2WD, 4WD, and 4LO. It also offers a number of different drive modes, something that the pre-facelift model did not provide. 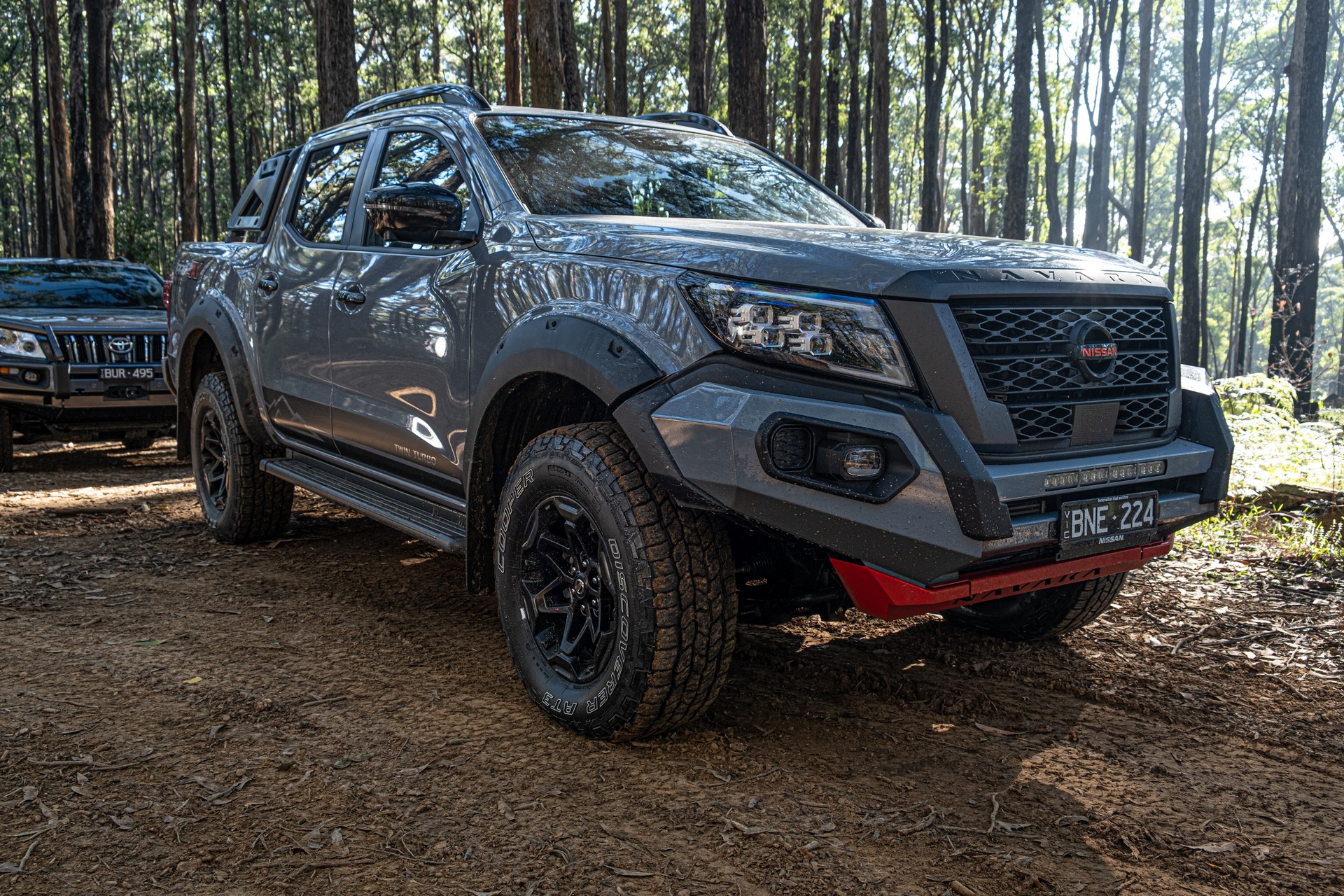 We spent the day exploring Victoria’s beautiful Toolangi State Forest and worked our way through some narrow and treacherous trails to reach Mount Despair. Deep and difficult water crossings were never an issue for the Warrior and the All-Terrain tires provided excellent traction on even the most difficult of surfaces.

Indeed, the Navara feels so at home on off-road trails that it’s possible to navigate across most terrain in rear-wheel drive mode without ever switching to four-wheel drive, let alone needing to put it into 4LO or locking the rear differential. With that being said, there were a couple of times when we did need to lock the rear diff to avoid getting stuck while making our way up one particularly narrow and difficult ascent. The powerful LED light bar also proved to be a lifesaver when the sun fell behind the horizon. 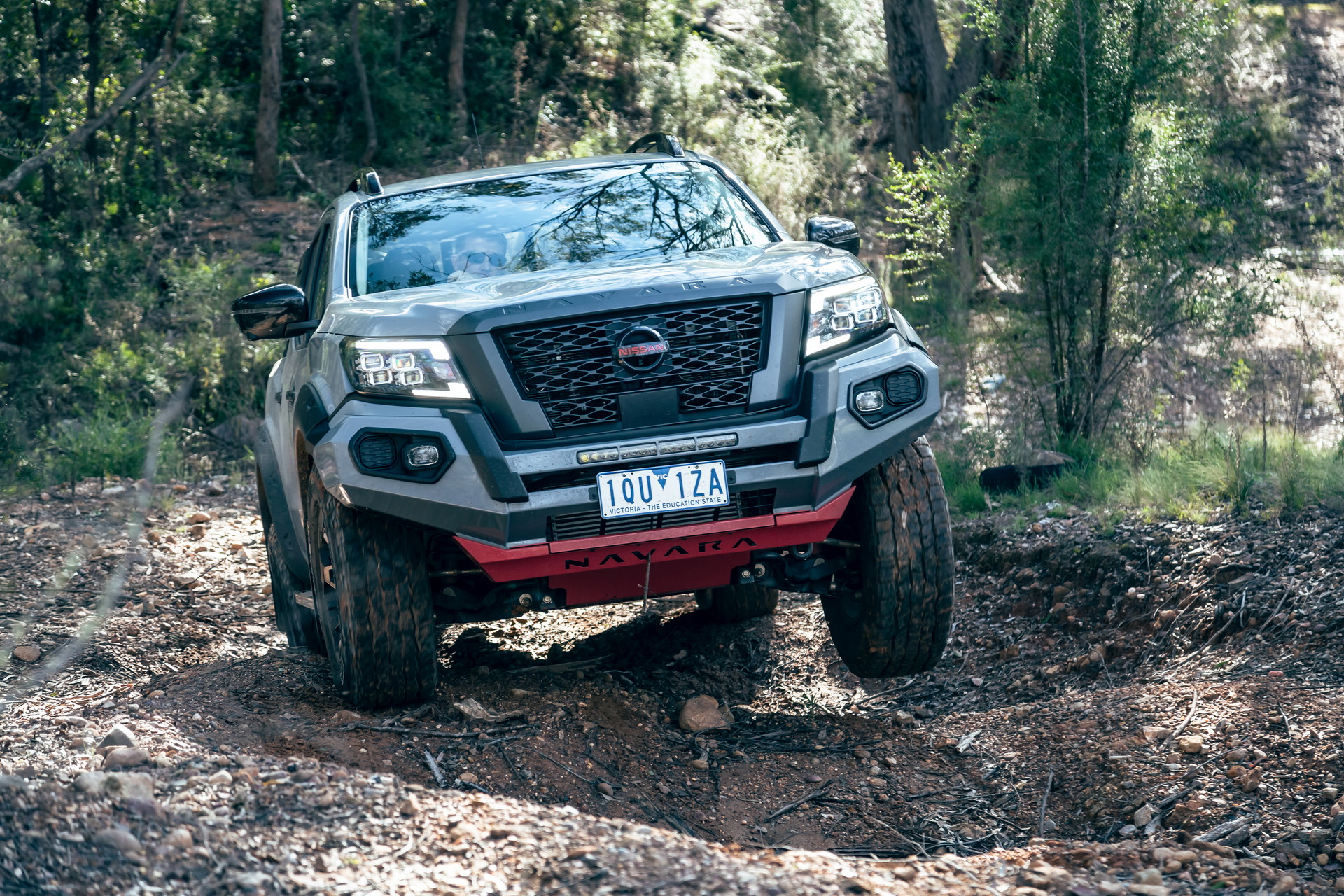