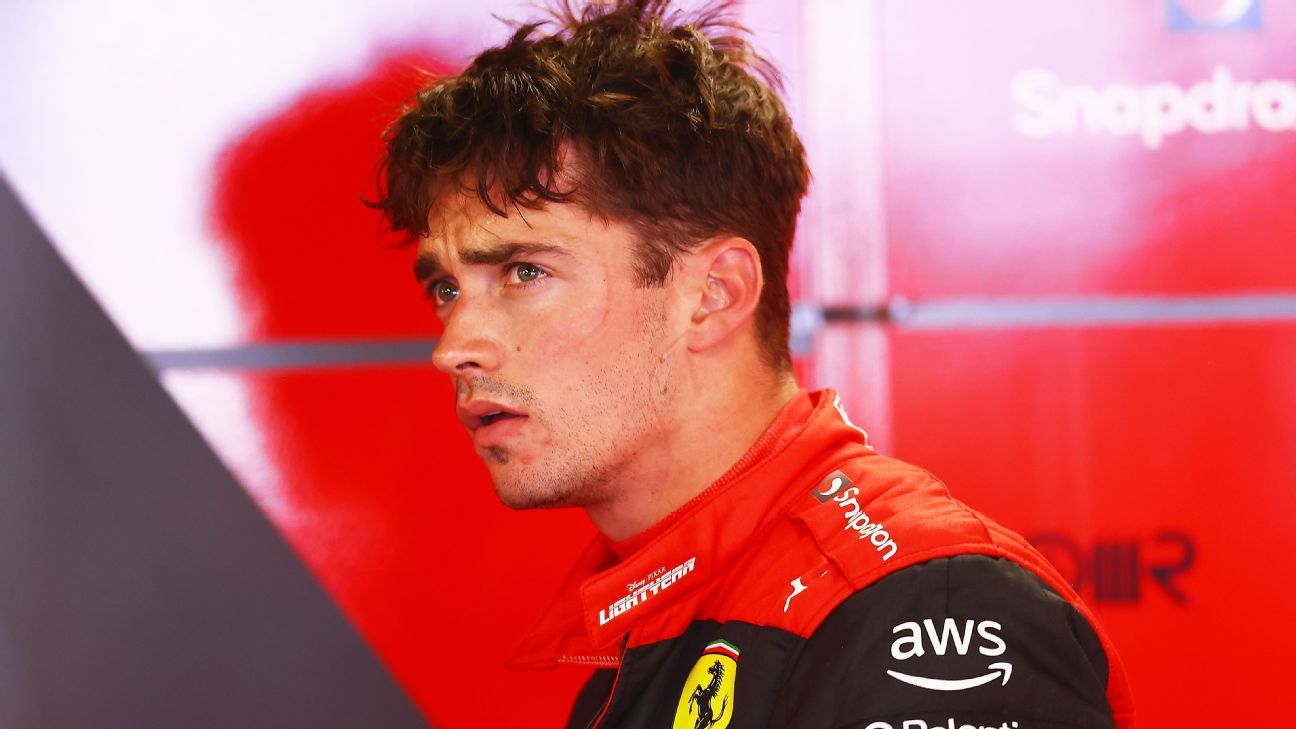 MONTE CARLO, Monaco — Charles Leclerc knew what an opportunity Ferrari had let slip through its fingers on Sunday.

“No words,” he said on his radio after the race. “The season is long, but we cannot do that.”

There must have been a lot going through Leclerc’s mind. Just an hour or so earlier, he had been in complete control of his home race. The Monegasque driver had come into the week laughing off questions about a supposed curse at the Monaco Grand Prix, where he had failed to finish in four previous attempts, but between Laps 17 and 23, it was hard to escape the feeling that his hometown hoodoo was very real indeed.

What was most remarkable about Ferrari’s decision-making is that the team made two separate blunders, one that cost Leclerc a win and a second that cost him a place on the podium altogether.

“Sometimes mistakes can happen,” Leclerc told the media later. “But there have been too many mistakes today overall.

“We cannot afford to lose so many points like this. It’s not even from first to second, it’s from first to fourth because after the first mistake we’ve done another one.”

Having locked out the front row of the grid and with Ferrari one-two until the first round of pit stops, the team could make no excuses about its final result.

“When you start with your two cars on the front row and you don’t win, it means something went wrong from our side,” Ferrari boss Mattia Binotto admitted. “I think we made a few poor decisions and we paid the price.”

A driver is never cruising at a Monaco Grand Prix, but Leclerc looked as in control as any race leader could look in those early laps. A prerace rainstorm had prompted the FIA to mandate full wets for everyone at the start — with the rain gone and the track drying out, the key for everyone was going to be the length of the first stint. When it was clear it would not rain again, there were two clear options in play for Ferrari to protect Leclerc’s lead.

Option 1 was to keep Leclerc out on the full wet tyres until the track was dry enough for dry tyres (slicks) — a tactic Lewis Hamilton pulled off to perfection when he won in 2016 and one Leclerc’s teammate, Carlos Sainz, was determined to pull off himself on Sunday.

Option 2 was switching from the wet to the intermediate tyre as soon as track conditions were right, which Sergio Perez did on Lap 17. While the intermediate would be the quicker tyre at this stage, the drawback to this option was the fact that another stop would be needed shortly afterwards to go onto the slick tyre.

Ferrari’s blunder was rooted in not fully committing to either idea for Leclerc.

Perez and Red Bull picked the second option, stopping on Lap 17 from third position for inters. He was blisteringly quick over the next two laps. The Red Bull team had been debating whether to try the first option but felt the pace advantage of the intermediate tyre, even if it was only for a handful of laps, was crucial.

“We decided it was a quicker route to go through the inter onto the slick,” Red Bull boss Christian Horner said later.

“The power of the out-lap was enormous, and I think Checo [Perez] absolutely nailed it.”

At the time, Perez was not convinced the team had made the right call.

“I thought we screwed up because the track was pretty dry and it felt like it was just a matter of laps before we needed to go onto the slicks,” Perez said after the race.

Ferrari waited another two laps, by which point the track was even closer to ideal conditions for the swap to slicks, before calling Leclerc in for intermediates on Lap 19. Leclerc, who had been leading teammate Carlos Sainz by nearly 5 seconds, would emerge from the stop behind Perez.

Perez’s stop should not have been the race-winning moment it turned out to be. While his pace was impressive on the intermediate tyre, Leclerc and Ferrari did not need to react the way they did to keep the lead intact. Perez still had to make the same switch to slick tyres Ferrari was planning to make with its two drivers. Track position is key in Monaco, and Ferrari had it… until it gave it up by bringing Leclerc in for inters. Had Ferrari stuck to Option 1 with Leclerc, its main concern would have been protecting Sainz’s second position from Perez.

As it turned out, Ferrari had sacrificed the buffer of Leclerc’s lead and track position to Red Bull and now had to hope Sainz could make the wet tyre-dry tyre switch and emerge ahead of Perez.

Binotto said Ferrari will have to analyse why it failed to make the right call in the heat of the moment.

“I think we made a mistake as well, because we should have called [Leclerc] in earlier, at least a lap earlier, or if not, as we did, we should have stayed out and simply stayed on the extreme wet, protecting the position, and then maybe switching directly onto the dries,” he said.

“Now that we made mistakes, I think it’s straightforward. What was the process bringing them that brought us to that? It will take some more time to look at it and have a clear explanation.”

Sainz had rejected Ferrari’s calls to stop for intermediates a lap before Leclerc came in, saying he wanted to wait for dries.

That was very nearly a race-winning call by Sainz. The Spaniard stopped for slicks on Lap 22 but said getting stuck behind a lapped Nicholas Latifi on his out-lap from the pits meant Perez emerged from his Lap 23 stop for slick tyres marginally ahead of the No. 55 Ferrari.

“I felt like we did everything that we had to do out there,” a dejected Sainz said after the race. “We stayed patient on the wets, we took the right decision to go onto the slick, and yeah, a lapped car, or a terrible out-lap stuck behind a lapped car, cost me a race win today.

“You can understand the frustration because a clean out-lap would have secured me the race win today, but it’s how the sport is sometimes.”

As it turned out, Leclerc was running behind Sainz when he stopped on Lap 22, when Ferrari provided perhaps the most farcical radio call in recent F1 memory.

By the time the correction came, Leclerc was already driving into the pits, gesticulating angrily with his hand and swearing at Ferrari over the radio.

This stop would drop Leclerc out of podium contention completely. When he rounded Turn 1 a lap later, he saw Max Verstappen‘s Red Bull slipping and sliding out of the pit exit ahead of him. As it turned out, this was Leclerc’s only chance of snatching back a place on the podium but, as Verstappen struggled for grip up the hill, Leclerc was unable to get past, and he would spend the rest of the race as the fourth part of a four-car train.

When asked on Sunday evening whether Red Bull had won or Ferrari had lost the race, Red Bull boss Horner admitted that it was a little bit of both.

“Of course, we had to go out and win it, but we also capitalised on the mistakes that were made. The circumstances were the same for everybody, and it was very tight between the two teams,” he said.

“Charles in the early laps seemed to have things pretty much under control; he had a buffer of his teammate behind him as well. At that point in time, it looked like Ferrari had the race in the bag.”

In a season that is shaping up to be closely run, the Spain-Monaco doubleheader might be a seismic 2022 moment for Ferrari and for Red Bull.

Leclerc comfortably led both races at one stage but scored just 12 points out of a possible 52, and he has seen his once sizeable championship lead disappear. He now trails Verstappen by nine points.

Is Perez a title contender?

Over back-to-back race weekends, Perez has shown his value to Red Bull. In Spain, he obeyed a controversial team order to let Verstappen overtake him and win the race, despite clear objections. In Monaco, when Ferrari dropped the ball and Verstappen was uncharacteristically off his usual best, Perez turned in one of the drives of his career to snatch the victory from the Italian team.

He is now just 15 points behind Verstappen in the championship.

While the race in Spain gave a pretty clear indication of how Red Bull sees the dynamic between its drivers, Perez will be hard to ignore in the championship if he can keep producing results like Monaco. Perez and Verstappen have a very good relationship, and it would be an interesting factor for the team to deal with if both its drivers are in the hunt.

When asked in the postrace news conference how a title challenge might affect the dynamic with his teammate, Perez brushed it off and joked to Verstappen: “We are still going to be in love, right?”

In the short term, the win almost guarantees Perez will be at Red Bull next season. He has yet to sign a new deal beyond 2022, but the importance of his Monaco victory was not lost on anyone.

When Perez was asked whether the Monaco win meant an extension was more likely now, this time it was Verstappen who turned to his teammate with a playful grin on his face.

“I think what you did today might help,” Verstappen said, laughing. “Just a little bit!”