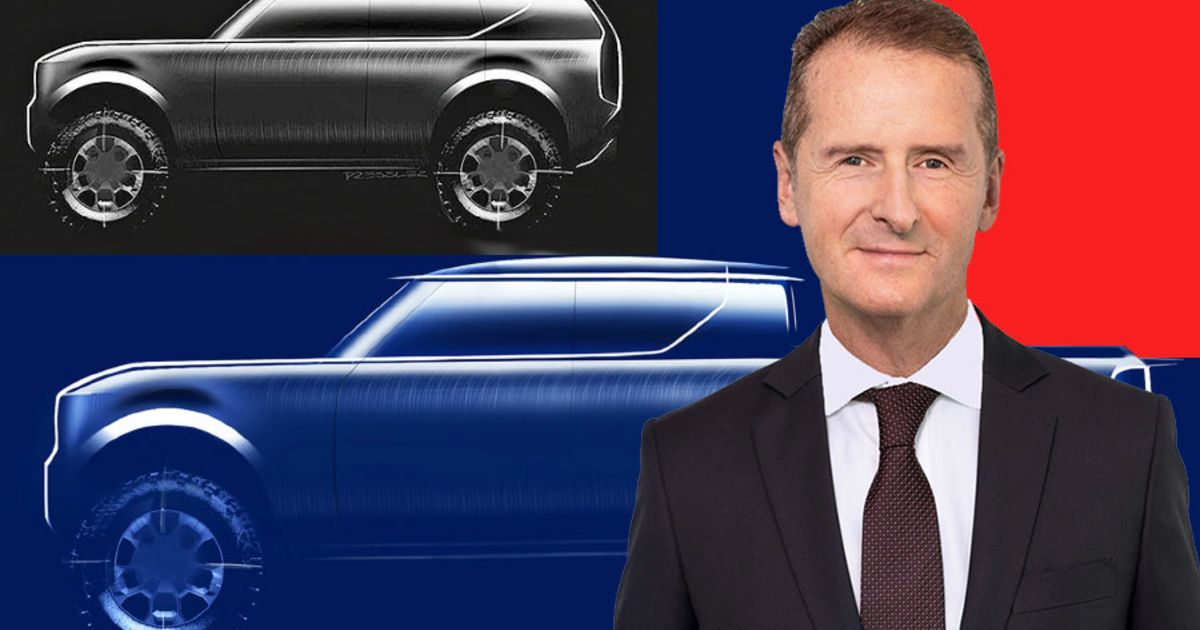 Call this a reality check: At less than a month old, Volkswagen’s nascent Scout brand doesn’t have employees, offices, executives, a factory or even a publicly disclosed product plan.

What it does have is a purchased semi-famous name, a rough sideview sketch of a planned battery-electric SUV and pickup, and a commitment from the head of the world’s second-largest automaker to make it all happen in the United States at lightning speed.

That commitment, from Volkswagen Group CEO Herbert Diess and unaccompanied by deeper details, has been enough to roil hundreds of U.S. dealers of the automaker’s eponymous brand over the last few weeks like nothing since the German automaker’s costly diesel emissions scandal.

Diess this week was in Davos, Switzerland, committing to have a site chosen by the end of this year for a multibillion-dollar U.S. assembly plant and likely an accompanying battery plant. At the same time, his VW dealers in the U.S. and their allies were peppering VW Group of America with questions about how Scout vehicles will be retailed.

In an exclusive interview on Friday, Scott Keogh, CEO of VW Group of America, offered what clarifications he could, specifically as Scout relates to the VW brand in the U.S.

Keogh said that answers about Scout — which VW Group acquired the rights to when its Traton truck unit acquired Navistar International Corp in 2021 — “will come when there is a Scout management team, that team comes in and meets the press and meets the markets and tells its story. And that’s really all there is to say.”

Keogh also clarified that potential spending by parent VW Group setting up the Scout brand in the U.S. will be separate from the $7.1 billion that the VW brand committed in March to spend in the U.S. on electrification and other efforts. He also said that the new “rugged” EV platform being developed for Scout by VW “could definitely provide an opportunity for non-Scout vehicles,” but he declined to elaborate.

In a letter dated May 24 to Keogh, NADA CEO Mike Stanton addressed the lack of information from the Scout announcement and urged Keogh to “quickly and clearly communicate Scout’s distribution plan to your dealers who have made significant investments to support VW’s business model and transformation to electrification.”

Stanton acknowledged that Keogh had “been a consistent and full-throated advocate for the franchise dealer retail model,” but warned that “the longer your dealers go without information and answers to their questions, the more that speculation will fill the void.” A spokesman for NADA authenticated the letter and declined further comment.

A number of state dealer associations — which work to protect franchise laws for their members — have either already written to Keogh or were in the process of doing so, according to several VW dealers and association executives from across the country who spoke to Automotive News. The communications are expected to vary in tone, just as state franchise laws vary, but generally demand more information on how Scout vehicles will be retailed and assert that VW and Audi dealers not be left out in the cold.

One example, sent Monday, May 23, from the North Carolina Automobile Dealers Association, is believed to be broadly representative. In it, NCADA President Robert Glaser wrote: “Despite repeated assurances throughout the years by Volkswagen that its dealers are ‘partners’ in advancing and promoting VW products, this announcement produced instant dismay and concern among all VW dealers.

“Certainly, given the strong history of a supportive and effective VW dealer network, even during the diesel-gate fiasco, the clear expectation would be that current VW dealers would be given the first opportunity to enlist as a Scout dealer. However, the widespread belief is that the underlying reason VW is planning to create a parallel dealer network is VW’s intention to reduce the VW dealer count.”

Glaser said the Scout announcement was “very alarming and puzzling — to the current dealer network,” which had spent years asking for those very products, and with no mention of how they would be sold. Glaser also pledged that his organization “will use every legitimate resource available to enforce its existing franchise laws that prohibit VW and all other factories and distributors from selling vehicles in North Carolina in competition with their franchised dealers.” Automotive News left a message with NCADA seeking further comment.

A letter from the Ohio Auto Dealers Association called the situation “untenable.” A letter from Texas sought to quantify VW dealers’ previous investments in support of VW’s electrification plan, and their lack of return so far on that investment because of production issues with the ID4 in Germany.

“By adding a new Scout line and not providing a pickup truck to the VW line is disconcerting and discounts the VW line. As a company that promotes the value of partnership, the Scout line belongs with the VW dealers,” Texas Automobile Dealers Association President Darren Whitehurst wrote, adding that one Texas dealer had spent $140,000 on store upgrades and thus far received just 21 ID4s to sell.

In announcing creation of the Scout brand on May 11, Diess said the automaker’s plan was to build a “separate, independent company” to operate the brand, sharing a sketch of a future battery-electric SUV and pickup. But Diess made no mention of how the U.S.-made vehicles would be distributed, leaving dealers wondering whether the new brand with products they have long coveted would either sell directly to consumers or be a competing franchise.

Diess, speaking at the World Economic Forum in Davos, said the automaker is assessing “brownfield sites and some greenfield locations,” in the U.S. for a Scout factory. VW Group CFO Arno Antlitz separately said the company is not ruling out an eventual share listing for Scout but added that it was too soon for such a decision.