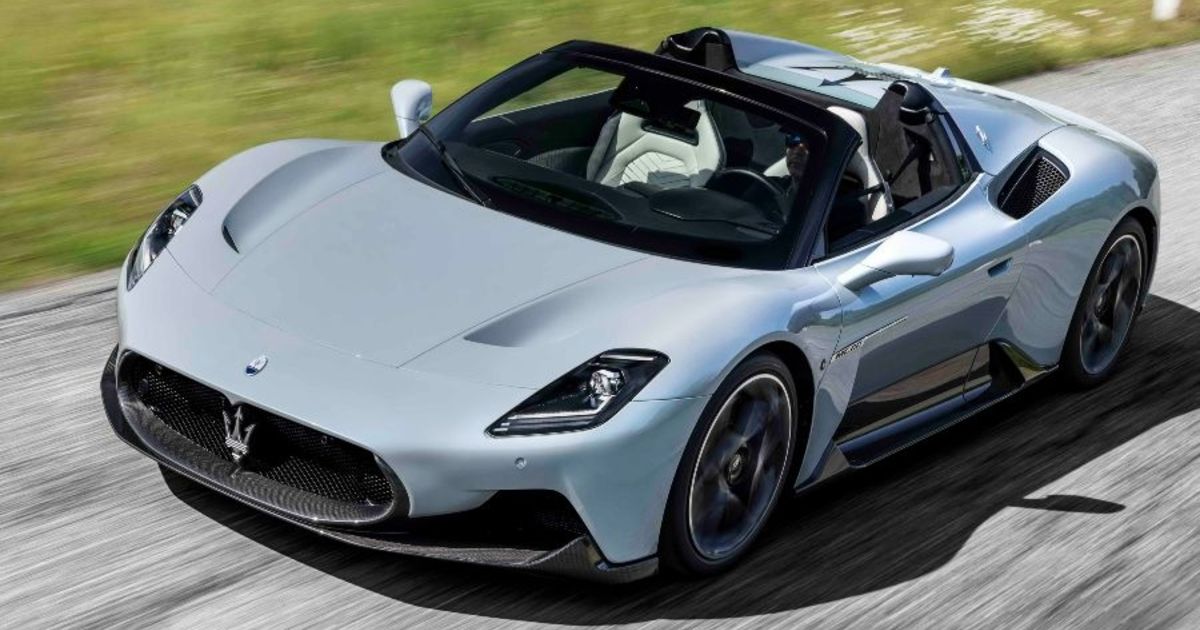 MODENA, Italy – The Maserati MC20 Cielo, the roadster version of the MC20 coupe, looks set to help Stellantis’ only luxury brand to return to a healthy profitability level.

The supercar is expected to go on sale in the first quarter of next year in Europe followed by a U.S. launch in the second quarter. Its Cielo name means “sky” in Italian,

The MC20 Cielo is 30,000 euros more expensive than the MC20 coupe, which costs 230,000 euros in Germany, currently the highest price tag of any car among Stellantis’ 14 brands.

The MC20 Cielo is the second new Maserati model unveiled this year after the Grecale midsize SUV.

“We are in acceleration mode,” Maserati CEO Davide Grasso said at the Cielo unveiling at the brand’s factory in Modena.

Maserati will unveil a third new model this year, a redesigned GranTurismo midsize coupe. To launch in 2023, the GranTurismo will also be the first Maserati to offer a full electric variant.

The brand confirmed on Wednesday that the MC20 will be offered as a full-electric variant, planned for 2025, but declined to say if it would be offered on both the MC20 coupe and Cielo.

The full-electric MC20 will have an 800-volt system to reduce charging times and will feature three electric motors — one up front and one each on the rear wheels to offer optimal torque vectoring.

Maserati plans to build six to seven MC20 coupes and Cielos a day, with an annual capacity of 1,300 to 1,500 units. Since the MC20’s launch in July 2021, Maserati has produced 1,000, of which 700 have been delivered. The rest have been sold but are yet to be delivered, Maserati said.

Maserati Chief Commercial Officer Bernard Loire said that 2022 production of the MC20 is already sold out. Average waiting time is about eight months, and the company will protect the price of the car until delivery, even if raw materials prices and inflation rise, he said.

The automaker will also protect the price until delivery for the Cielo, Loire said. The company expects the roadster to account for 40 to 50 percent of the total installed capacity. Maserati says convertibles represent 35 percent of the global supercar market.

Competitors to the MC20 include the Ferrari 296 GTS and Lamborghini Huracan, both of which have open-top versions.

The MC20 Cielo has a retractable glass roof, supplied by Webasto, that takes 12 seconds to open or close, which Maserati says is the fastest in the category.

The “electrochromic” roof can go from clear to opaque in less than a second at the touch of a button using polymer-dispersed liquid crystal (PDLC) technology. This feature, which allows a full view of the sky when the roof is closed – giving the model its “Cielo” name – was suggested by a customer, said Francesco Tonon, head of Maserati product planning.

“We had focus groups in Europe and the U.S. asking customers what they were looking for in a roadster version,” Tonon said, adding that they did not want “a mere roofless variant of the coupe.” A British customer said he wanted a fully transparent roof to be able to see the sky even when it was raining, a common situation in London, where he is based.

The roadster uses the same 3.0-liter turbochrged V-6 Nettuno engine that produces 621 hp and 730 newton meters (538 pound-feet) of torque thanks to the Maserati Twin Combustion system, which has a dual ignition and dual injection. The engine is coupled to an eight-speed dual-clutch transmission driving the rear wheels.

Both MC20 models have a central carbon-fiber monocoque structure with front and rear aluminum subframes, and carbon-fiber body panels.

Last year, Maserati increased its global sales by 41 percent to 24,300 units, but thanks to a better product mix that was mainly due to the launch of the MC20 in the second half.

The brand’s revenues were up 47 percent to more than 2 billion euros. Adjusted operating profit was 103 million euros compared with a loss of 91 million euros in 2020. Operating margin was 5.1 percent – and 6.5 percent in the second half after the MC20 entered the market.