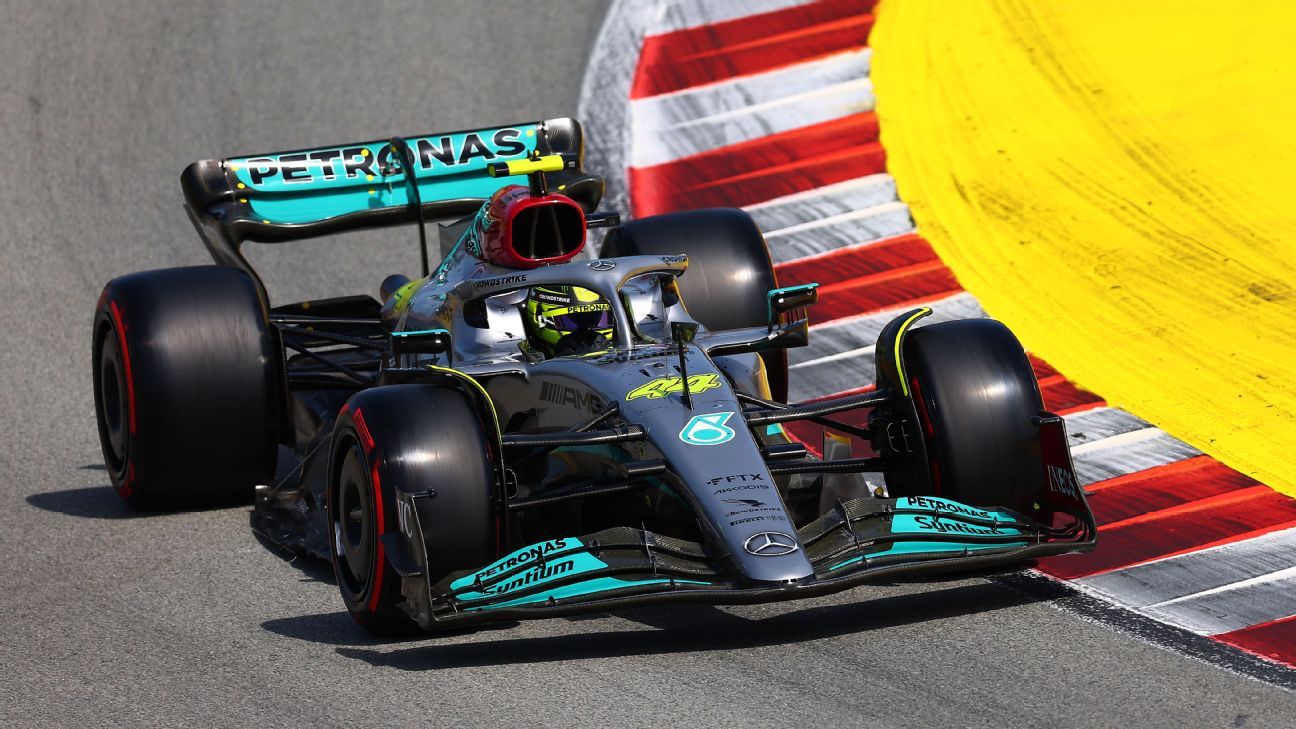 BARCELONA, Spain — Mercedes is hopeful that the step up in performance it made at the Spanish Grand Prix will offer a platform for it to chase down Red Bull and Ferrari at the coming rounds.

George Russell secured the team’s best qualifying result of the season with the fourth fastest time at the Circuit de Catalunya on Saturday behind Charles Leclerc, Max Verstappen and Carlos Sainz. The margin to pole position was also the smallest it has been for either Mercedes driver this year at 0.643s.

The relative improvement came after Mercedes introduced an upgrade package to its car that helped address the bouncing problems it has struggled with since the start of the year. Russell and teammate Lewis Hamilton reported no bouncing on the straight, although it was still present in high-speed corners at Turn 3 and Turn 9.

Team principal Toto Wolff hopes that solving the bouncing will allow his engineers to turn their focus towards outright performance at the coming races.

“I think we have done a solid step, whilst we know how to unlock more performance, and we’re not yet there,” Wolff told Sky Sports. “So it’s step by step.

“The other teams have been able to continue to develop their car whilst we have been a little bit in a pause moment to find out about the bouncing.

“As soon as we can pick up the regular development, as soon as we understand the tyres better now the bouncing is gone, I think we will be catching up.”

The bouncing issue is related to the underfloor aerodynamics of the car and the airflow’s tendency to momentarily stall when the downforce acting on the car forces the floor into the track surface. At times the bouncing has been so bad that it has damaged the underside of the car or forced drivers to back off the throttle on the straights.

At previous rounds, Mercedes eased the problem by running a higher rear ride height, but in doing so it sacrificed aerodynamic performance and lap time. However, updates in Spain — which included modified floor edges, deflectors on the inside of the rear wheels, and a new winglet under the car — appear to have reduced the bouncing while allowing the team to run at a lower rear ride height.

“We understand now,” Wolff added. “It’s all an aerodynamic effect from a floor swinging.

“It was difficult to come to that conclusion in a scientific way but the team around [technical director] Mike Elliott and [aerodynamics director] Jarrod Murphy, they’ve done it and that’s great.”

Russell said the step in performance was based on progress and understanding the team made at the previous round in Miami.

“We already felt like we had the solution in hand during the Miami race weekend so we know the direction we need to go,” Russell said. “It has taken time to find what the issue was, develop the tools to solve it and then bring it to make the car go faster. We have done that to a degree.

“Now we know the direction and focus on making the car go quicker rather than problem solving. Through the corners it wasn’t fundamentally different but we just had more grip so we could get the car closer to the ground.”

After the team’s worst performance of the year in Imola, Hamilton wrote off his chances of fighting for this year’s title. He said he had not given any thought to revising that opinion, pointing out that the 0.119s gap to Russell was his biggest concern after Saturday’s qualifying session.

“I am not putting my mind to that,” Hamilton said of his championship chances. “I am still way off. My teammate is fourth so that means the car should be at least third and I am sixth.

“I am still struggling with the car. I don’t know how to get along with that and what to do but we will keep working hard.”

The Spanish Grand Prix is live at 8.55AM Eastern Time on ESPN2.