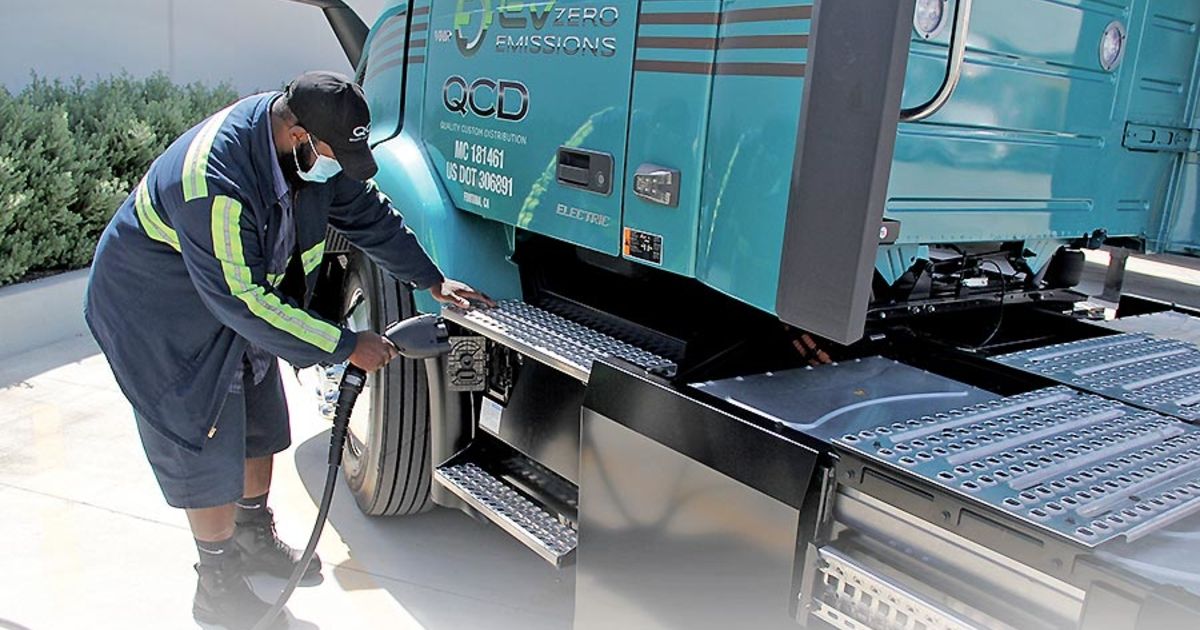 LOS ANGELES — For a glimpse of how quickly the market for electric heavy-duty trucks is evolving, consider the crowd size of the Advanced Clean Transportation Expo, an 11-year-old trade show for the burgeoning segment.

According to show organizers, more than 8,300 people attended last week’s expo in Long Beach, Calif., which featured a range of suppliers and truckmakers such as Daimler Trucks and Nikola Corp. showing off their latest zero-emission and green vehicles. Attendance was up about 60 percent from the August show, prompting organizers to move the event to a larger space in Anaheim, Calif., next year.

“The attendance numbers are clearly a reflection of what’s happening in the industry,” said Erik Neandross, CEO of clean transportation consulting firm Gladstein, Neandross & Associates, during the expo’s opening reception.

Interest in electric big rigs is growing as massive investments are being made by established truckmakers and electric startups. The market is on the rise as companies look to meet looming government targets and hit their own sustainability goals, and as fleet operators and drivers react to the record-high cost of diesel fuel.

But the market for electric heavy-duty trucks is still small. Short-term sales goals are often discussed in the hundreds or even dozens of units. Nikola, for example, said this month that it delivered its first 11 Tre semitrucks in April. It expects to ship between 300 and 500 trucks this year.

The trucks’ production could herald a fresh start for Nikola, whose stock price plunged last year amid accusations of fraud levied against its founder.

While the future of trucking is leaning electric, no one knows how quickly the industry will get there or what technologies will emerge as the best solutions.

“It’s clear we’ve not hit the easy button yet,” Mary Aufdemberg, general manager of product strategy and market development for Daimler Trucks North America, said during a panel discussion. “There are a lot of options out there that we all have to be very active in pursuing.”

Many of the hurdles to electric heavy-truck adoption will sound familiar to those who follow the passenger vehicle market. Long battery- charging times, the lack of a robust charging infrastructure, range anxiety and high costs were major topics at the show.

But the answers to those questions in the commercial trucking space are likely to be distinct from those for passenger vehicles.

“There are different rules in the automotive space versus the commercial space,” said Rob Ferber, chief technology officer of the Los Angeles electric truck startup Xos. “Trucks are not big cars. Cars are consumer products. If they fail or if the return on investment is a negative number, that’s just part of a lifestyle choice. Commercial products with negative returns on investments aren’t commercial products. They’re art projects.”

While the number of public charging spots for passenger vehicles has risen significantly in recent years, that means little for heavy trucks, which might not be able to physically access those stations.

“The inability for fleets to access recharging infrastructure will be the single largest inhibitor to widespread adoption,” said David Carson, senior vice president of sales and marketing at Daimler Trucks North America. “It’s what will keep these technologies constrained to important but niche-use cases.”

Designing charging points with trucking in mind will be crucial for electric adoption, but so will investing in the nation’s electric grid. Carson said Daimler estimates there would need to be a 20 percent increase in electricity generation nationwide if the country’s trucking fleet were to become zero-emission.

“When we start to think about 50 or so battery-electric trucks charging simultaneously at a highway rest stop, almost any local power grid would be severely challenged and overwhelmed to deliver this power,” he said.

Executives were also in agreement that, because of high costs, government incentives are crucial for electric truck adoption. According to a report by Gladstein, Neandross & Associates, battery-electric semitruck tractors can have a base cost of about $300,000.

While the report notes that base prices for electric trucks are expected to decline by as much as half by 2030, as battery and components costs decrease, incentives remain critical.

More public funding is being made available. According to the report, federal and state incentives will increase to about $20 billion this year, up from a “historical annual average” of about $3 billion.

“The incentive market has really started to explode, and this will be the case going forward,” Erik Neandross said at the expo.

The zero-emission truck segment has been dominated so far by battery-electric vehicles, but many companies are betting that hydrogen fuel cell technology will emerge as a major consideration.

Hydrogen-powered trucks are a rarity for now, and the public charging infrastructure to support them is in its infancy. Most of the country’s hydrogen fueling stations are located in California, where there were 52 as of June 2021, according to Gladstein, Neandross & Associates. But most of those were designed for passenger vehicle use, not heavy-duty trucks.

Still, truckmakers are investing in hydrogen fuel cell development. Nikola, for instance, plans to introduce a hydrogen-powered Tre truck in late 2023, with range of up to 500 miles compared with about 350 miles on the BEV model. The hydrogen model will be geared toward long-haul trucking uses, Nikola’s Lohscheller said.

“There will be customers who prefer the electric version because, in some uses, you know you’ll come back to certain charging points,” Lohscheller said. “You can go back and charge overnight. If you look at the distance of a lot of trucks in the U.S. and Europe, it’s not so long. They come back to the same hub or station. But some customers need longer range.”

Volvo Trucks, meanwhile, sees hydrogen-powered trucks playing a major role alongside battery-electric trucks and those with internal combustion engines. Volvo’s VNR Electric truck is already on the market and will primarily serve urban markets, said Peter Voorhoeve, president of Volvo Trucks North America. Hydrogen-powered trucks will start to serve long-haul freight by the end of the decade, he said, while a market for internal combustion trucks powered by renewable fuel sources will remain even beyond 2040.

“You’ll still have internal combustion engines, but with renewable fuels,” Voorhoeve said. “Are they powered by renewable diesel or renewable natural gas? There are many options that we’re investigating right now.”