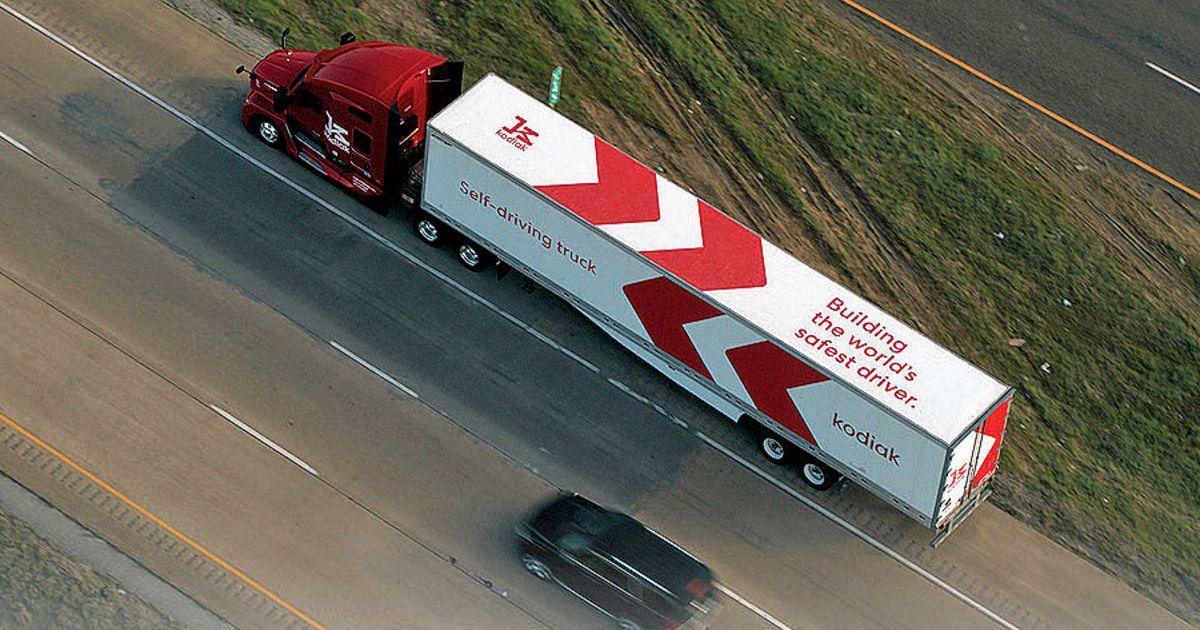 Self-driving truck developers are promising they’ll launch commercial service as soon as next year. One of the key remaining engineering hurdles involves safely coaxing these 80,000-pound robots to the side of the road when things don’t go according to plan.

As driverless-deployment timelines draw nearer, many of the leading companies are focused on perfecting this particular fail-safe maneuver — even more than on expanding their routes or solving other edge-case scenarios.

“We can talk until we’re blue in the face about technology capabilities and the maneuvers a truck can handle and the way it interacts with traffic and all that stuff,” said Don Burnette, CEO and co-founder of Kodiak Robotics. “But at the end of the day, in order to launch this technology safely, when there is something that isn’t quite right, there has to be that capability to then safely pull the truck over to the side of the road.”

For a variety of reasons, this can be a complicated act, more so than an ordinary lane change. But companies are inching along.

Kodiak Robotics has practiced the maneuver since last year. Last week, the company conducted a public demonstration, cutting an ethernet cable that’s part of its self-driving system and showing a video of the Class 8 truck then pulling to the shoulder along Interstate 45 near Dallas.

The Mountain View, Calif.-based company, which built its systems to check for faults 10 times per second, heralded the test as an industry first. Competitors say they have conducted similar testing.

Waymo, with experience in both robotaxi and trucking applications, says it regularly tests its trucks in these so-called minimal-risk condition scenarios on closed courses, plotting for trucks to either pull to the shoulder or get off the road at the nearest exit.

Another competitor, Aurora, expects to demonstrate that capability at highway speeds in the third quarter of this year. The company says it is refining pulling onto the shoulder now in simulation, on test tracks and on limited settings on public roads.

“Most of the time, we talk about these sexy machine-learning, computer-vision types of problems, which are obviously important,” Urmson said. “To actually have a commercially viable product, you have to deal with what happens when the product breaks in some way.”

Although companies are placing fail-safe issues at the forefront now, they’ve long been under consideration.

For Aurora, that has involved working with partner Volvo Autonomous Solutions to integrate its self-driving systems into Volvo’s VNL long-haul truck and develop redundant systems for braking, steering and propulsion.

Likewise, when Burnette started Kodiak in July 2018, he did not want to merely prepare for autonomous testing, in which he could rely on a human safety driver as a backup. He wanted to incorporate fallback conditions form the start.

“ ’Driver, take over,’ that’s a pretty logical and reasonable way to design the early stages, because you don’t have to worry about handling the system in a degraded form,” he said. “But that’s a shortcut approach. We said, from day one, we’re going to calculate both a nominal driving path and a fallback driving path, and we’ve built up the sophistication of these systems in parallel.”

Kodiak’s design separates its computational engine into two different systems: one that handles understanding the road environment, decision-making and other primary tasks, and another that’s certified to the most stringent Automotive Safety Integrity Level (ASIL-D) in the industry and can take control when a fault is detected and navigate to the side of the road. Waymo and Aurora have similar primary-and-backup computing architectures.

Road shoulders themselves can be haphazard environments, littered with debris, roadkill and other vehicles that are either stopped or possess uncertain trajectories. Still, the shoulder is almost always preferable to stopping in the lane of travel.

“We think of that as a last resort,” Burnette said. “It’s generally not considered to be the safest option in most circumstances. Whenever there’s an available shoulder and access to get there, our truck will try to do it.”

Once parked on the shoulder, there is yet another challenge. Federal Motor Carrier Safety Administration rules mandate that drivers of vehicles stopped on the highway or shoulder must place warning triangles or flares behind them within 10 minutes of stopping.

A Kodiak spokesperson said the company is working with regulators and others to find a solution to a problem that remains nettlesome across the industry. It will need to be solved before commercial deployments begin next year.

For now, getting to the side of the road ranks as a milestone.