GMC’s Denali trim level is meant to signify that nothing else could be higher. After all, it’s named after the highest peak in North America but now the brand wants to go further with a new 2022 trim level called the Denali Ultimate.

This truck is aimed squarely at the most luxurious versions of the RAM 1500 and Ford F-150 such as the Limited trims and to find out if it can beat those rivals we flew out to San Diego, California, for testing. After some time behind the wheel of the new Sierra Denali Ultimate on busy roads and highways, we came away impressed.

This isn’t the first time GMC has used the word Ultimate in combination with the Denali. Back in 2016, it introduced the Ultimate Edition in limited quantities and even last year there was an Ultimate package available. Each one has aimed to be the king of the mountain but none have dared to go as far as the 2022 Denali Ultimate. 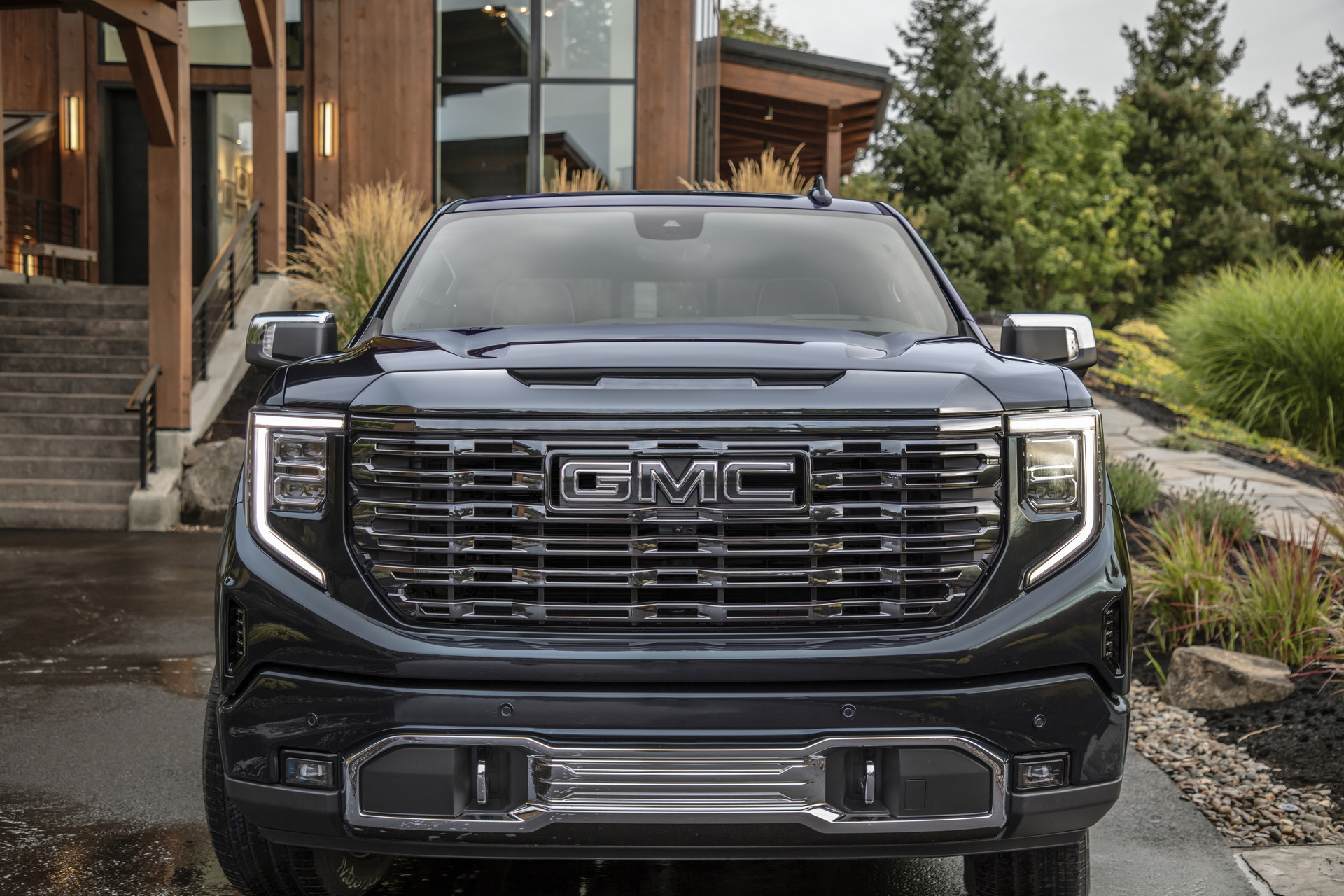 As part of a styling refresh for the year, the front of the truck features a grille and headlights that have been redesigned. Horizontal lines dominate each surface in an effort to make the truck look wide and powerful. Now, the headlights almost seem as though they’re simply integrated into a grille that takes up the entire front of the truck and that’s exactly as GMC intended.

Only the Denali Ultimate will come equipped with dark chrome accents on the grille. It will also exclusively get a set of 22-inch low-gloss black wheels with machined accents. Insert your jokes about truck owners being distracted by shiny things here because when we get in the truck the shiny bling is all but gone.

No Two Ultimates Are Exactly Alike 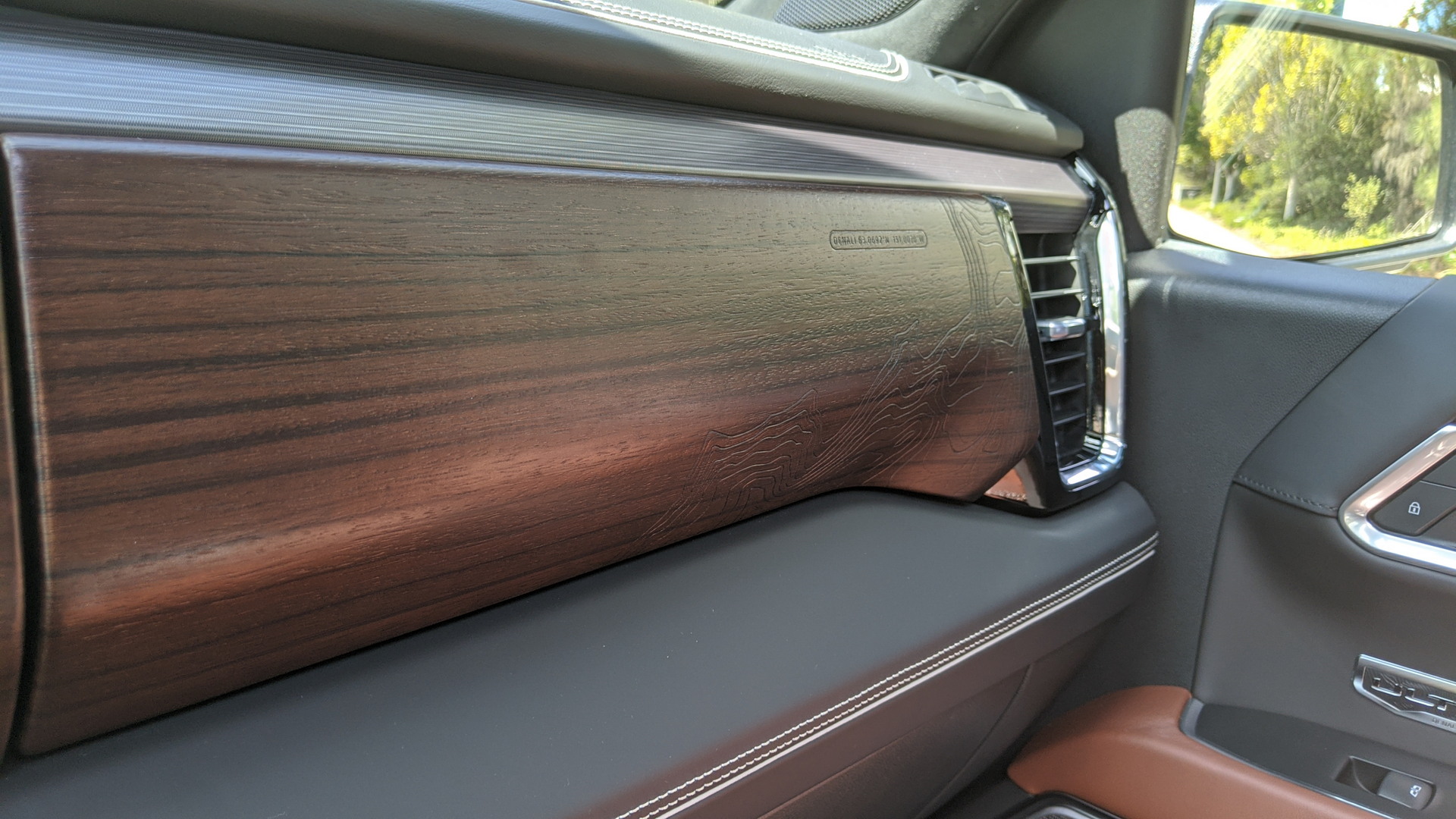 The Sierra Denali Ultimate has some of the best materials we’ve ever seen not just in a GMC, but in a truck – full stop. The suede headliner is a nice touch but what’s more impressive is the full-grain leather upholstery matched up with real open-pore ‘Paldao’ wood throughout the interior. GMC is right to point out that since the wood is real, no two Denali Ultimates will be completely identical even if the same list of options and features are installed. While it might seem gimmicky to some, we like the topographical map of Denali mountain actually etched into the wood on the dash. 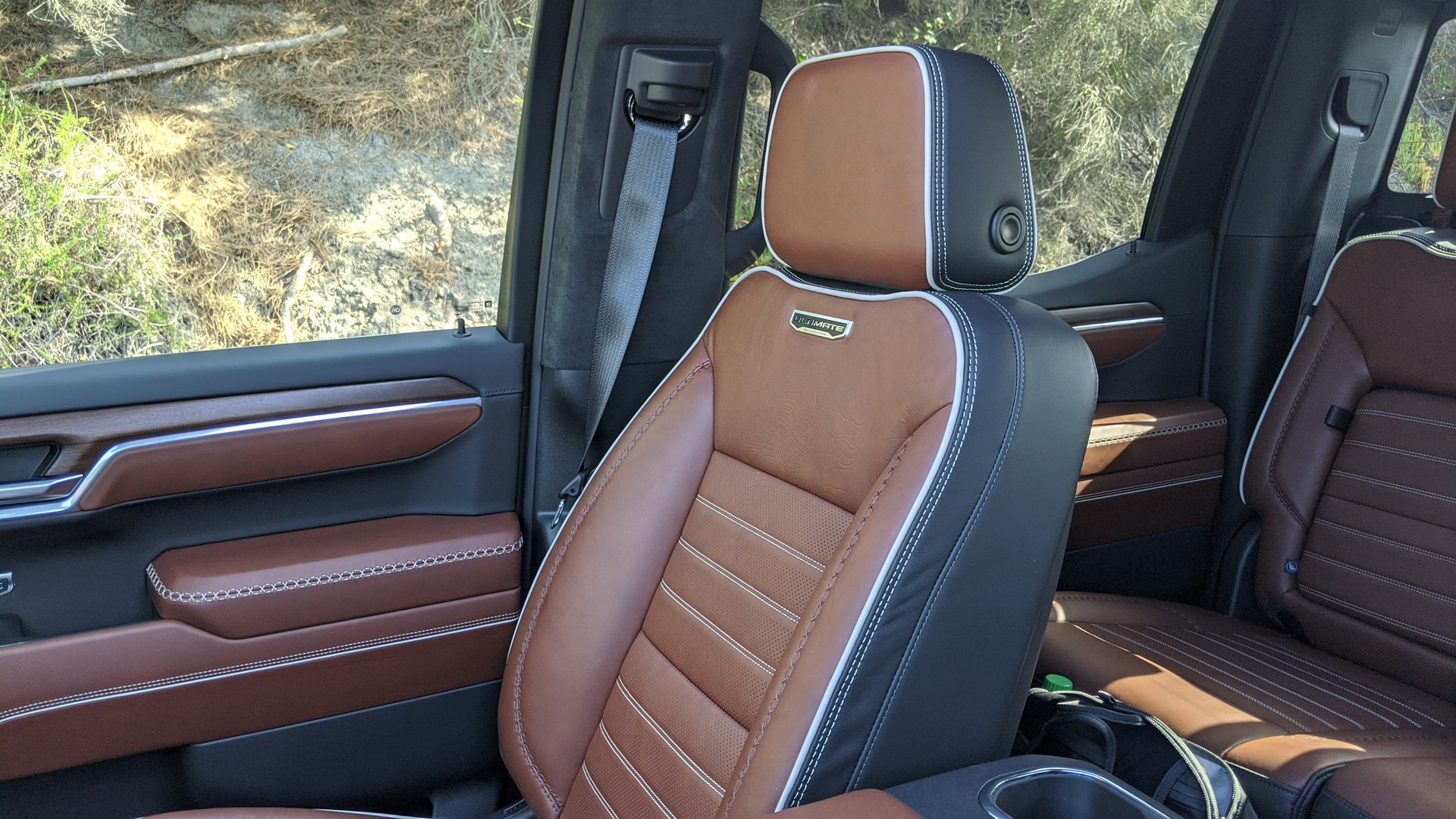 The seats themselves are both nice to look at and exceptional to sit in with 16-way power adjustability ensuring that everyone can find a comfortable position. Those adjustments include specific actuators that control the lateral bolsters, the upper shoulder pad, and lumbar support as well. Just like in the Sierra AT4X that we also drove on this trip, the seats have a massage feature which we used liberally. GMC even included a single button that can lower all windows and open the sunroof with a single push. 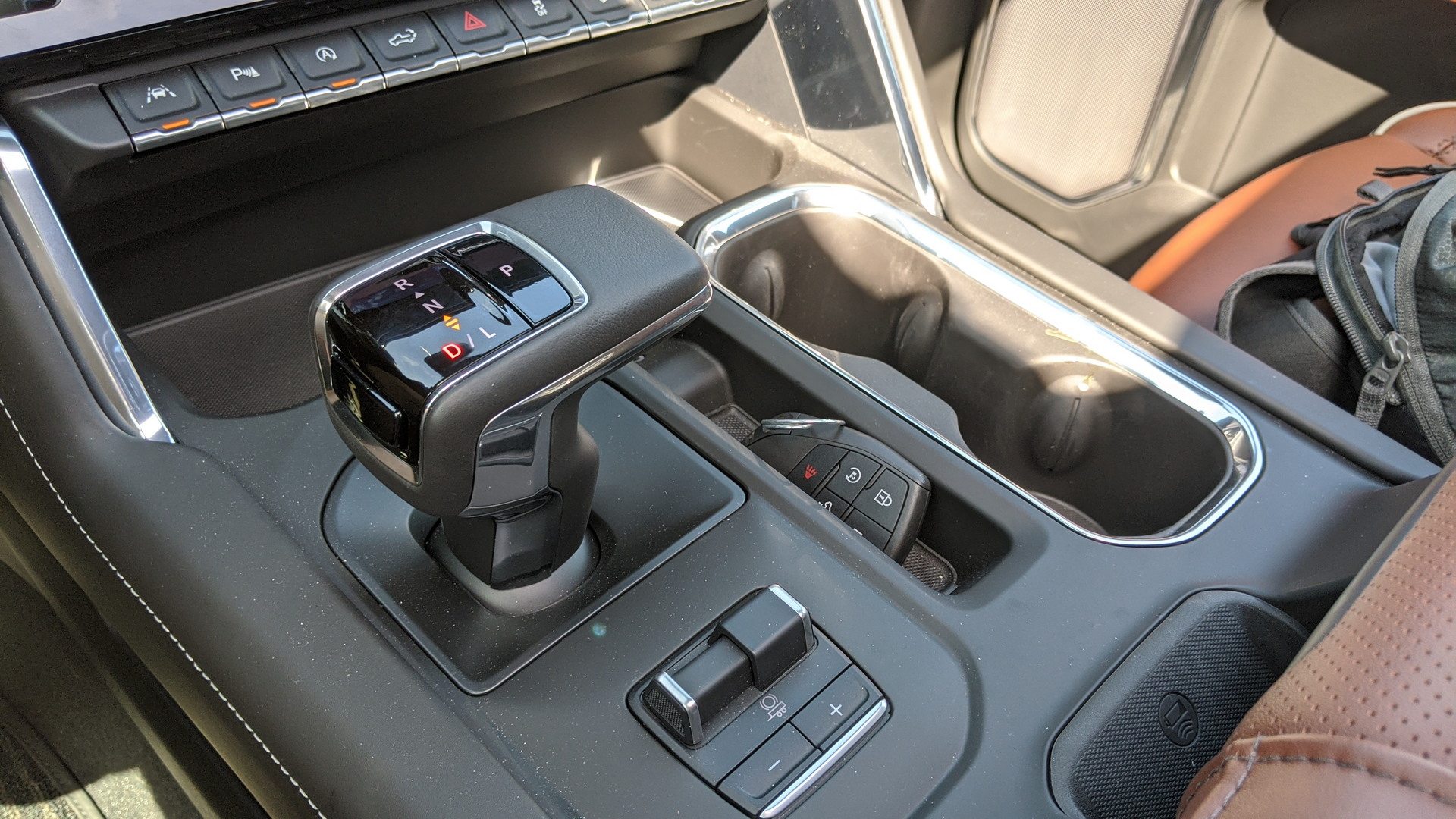 While in those seats it’s easy to see that the interior in both rows is a great place to spend time. Not only is there more than enough head- and legroom in each row but little features stand out such as how the suede headliner actually continues down both the A- and B-pillars. Even at the rear, passengers will find heated seats as well as USB and USB-C power ports to keep devices running strong.

Integrating Denali With The Digital Age 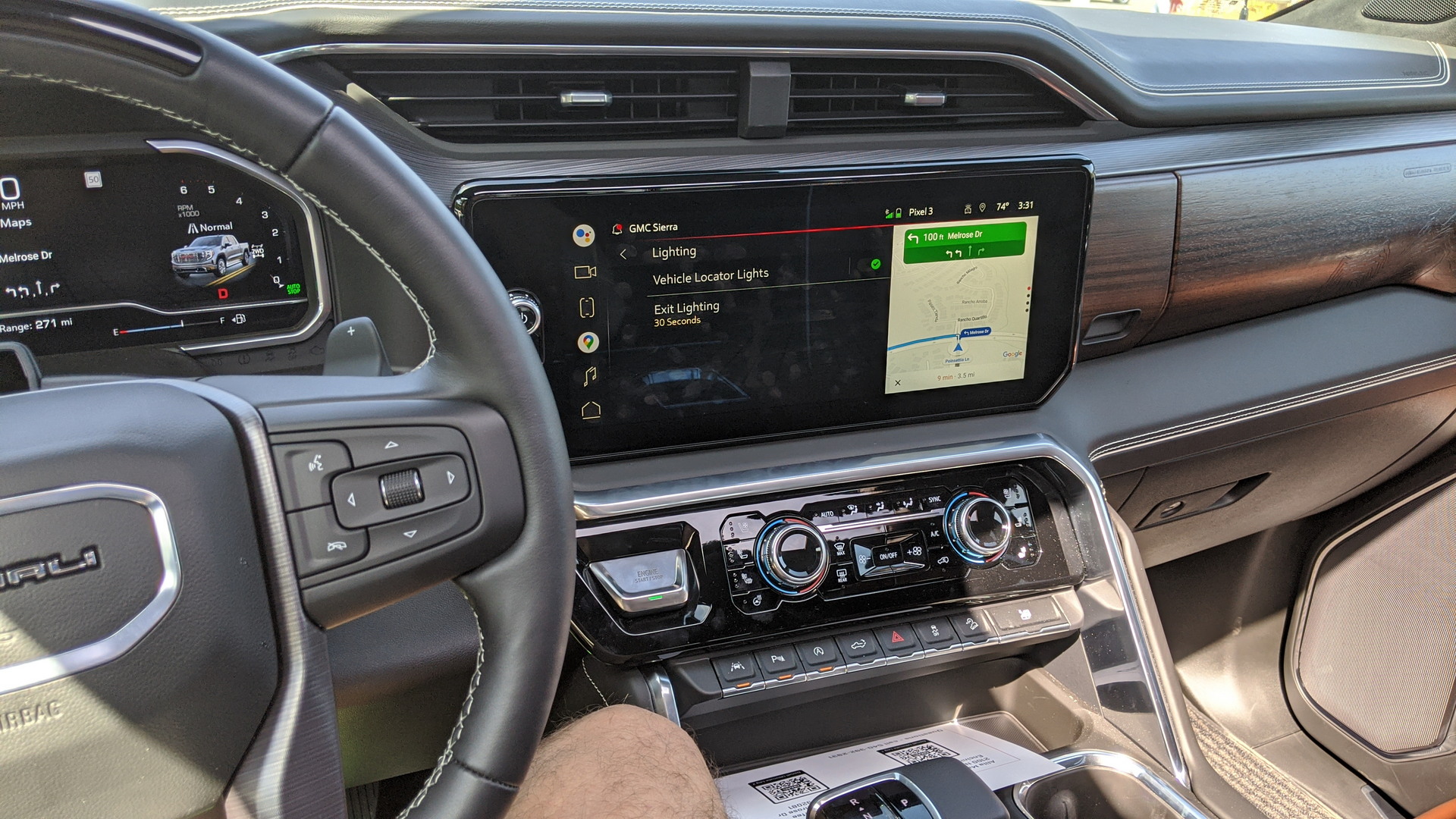 No luxury product can be complete today without fully embracing the latest technology and the Sierra Denali Ultimate doesn’t disappoint. Ahead of the driver is a 12.3-inch cluster display that’s fully configurable. The central infotainment system measures at 13.4-inches and has just two physical buttons, one for ‘home’ and a rotary dial for volume. Both screens are bright and utilize simple menus that are easy to understand and navigate.

That ease of use is in large part thanks to Google Built-In which is standard on every Denali Ultimate. While the system isn’t laid out like an Android-powered device it operates much in the same way and responds to touches and other inputs instantly. 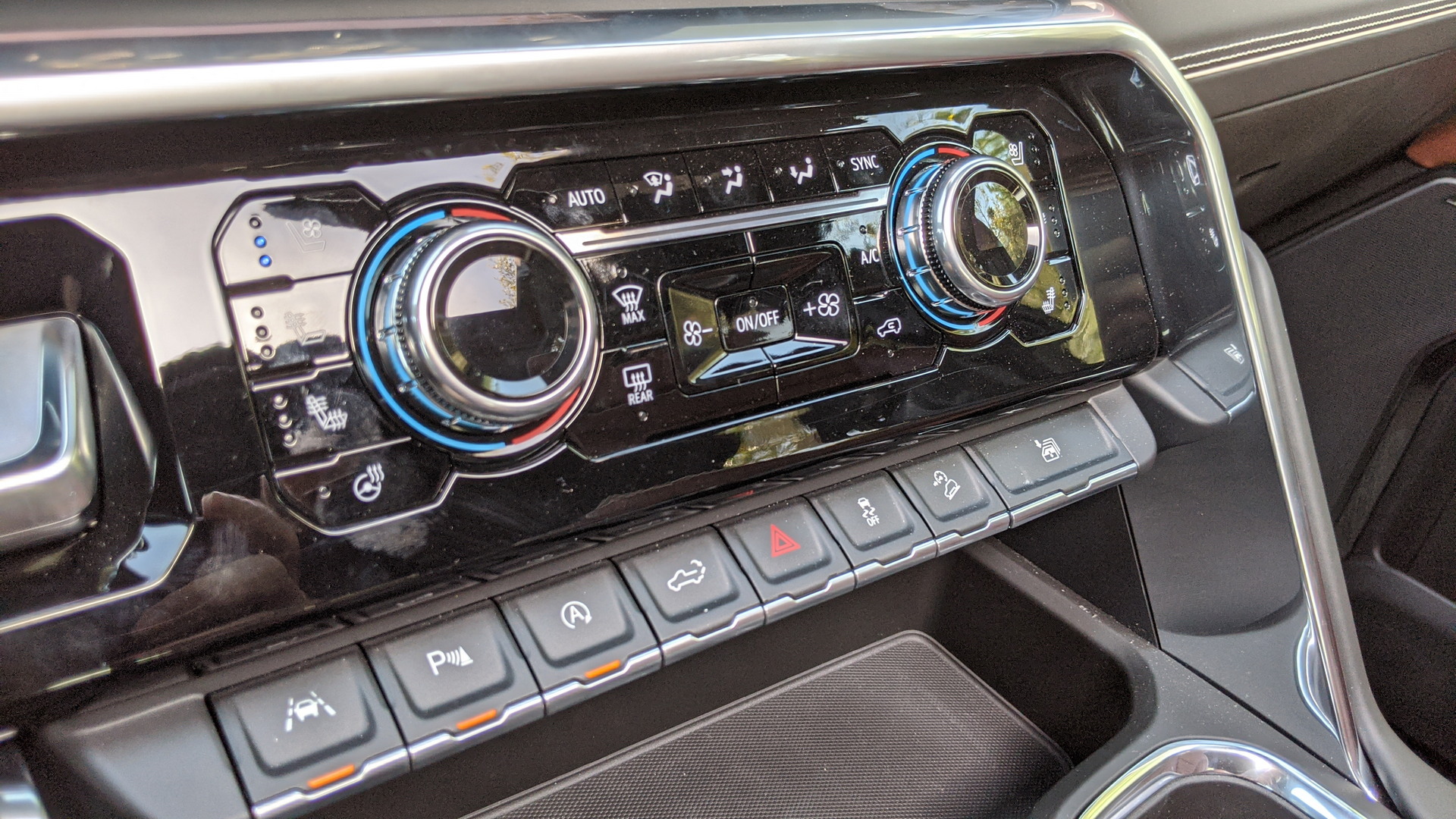 Unfortunately, despite being so wide, the screen can only be used for a single specific task at a time so for example, there’s no way to keep navigation on one side of the screen while searching through radio stations. Additionally, while GMC includes a 15-inch multi-color heads-up display, we found that the bright sun washed it out very easily. We didn’t get to drive the truck at night but we suspect that would’ve been a better experience.

At the same time, we’re grateful that GMC included a bevy of physical buttons for climate control as well as other important functions like lane-keep assist, parking sensors, and more. Inside the center console, you’ll find a wireless charger as well as multiple power points under the center armrest. 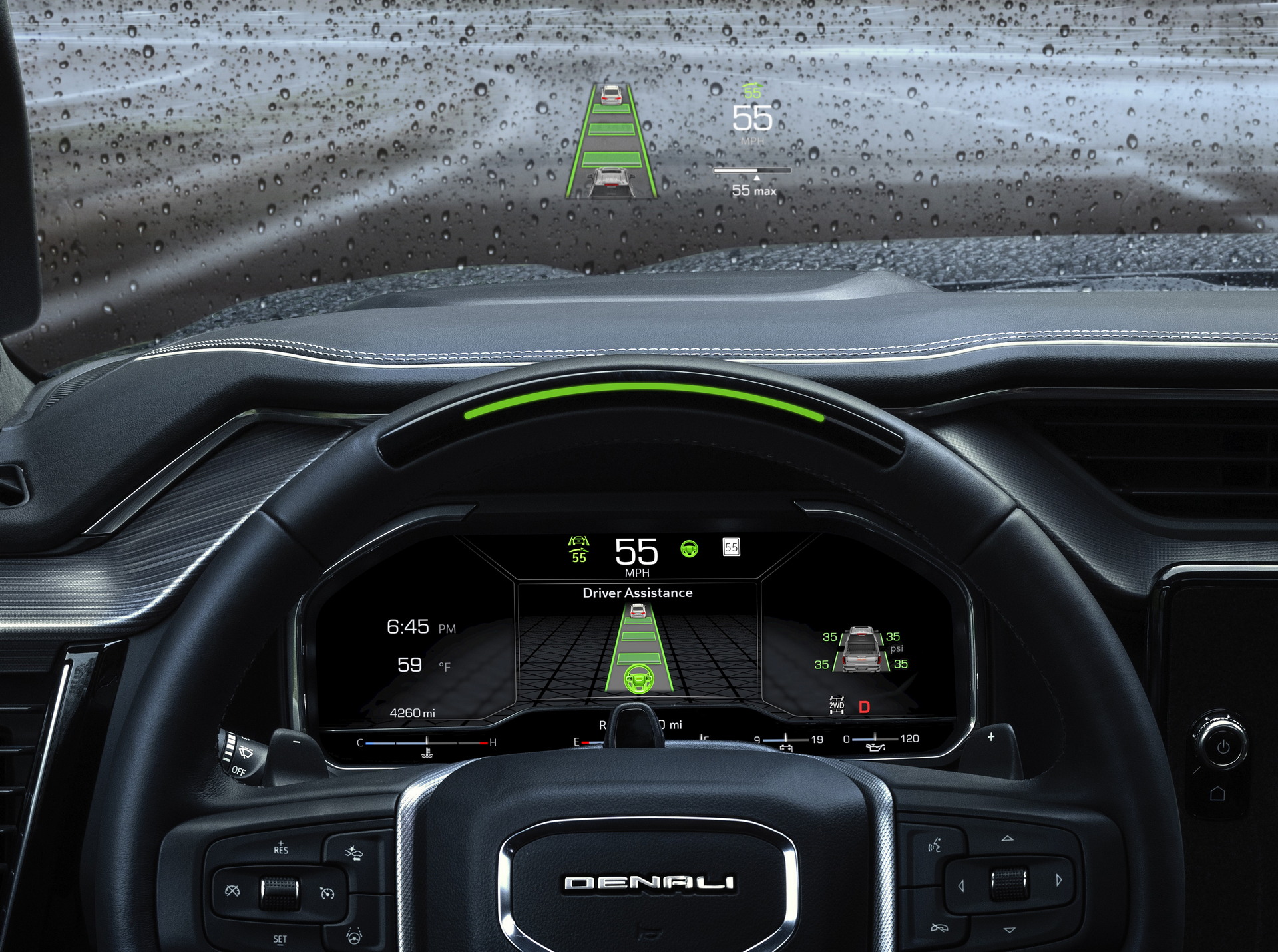 California is known for many things including its beaches, its ski slopes, its desert, and of course, its traffic. In fact, it’s in that traffic that the Sierra Denali Ultimate might shine the brightest thanks to the addition of SuperCruise. The hands-free technology from General Motors has been updated in this truck and it possesses some of the most impressive features we’ve experienced.

Unlike other driver assistance aids from other brands, SuperCruise is a truly hands-free system that doesn’t require a driver to hold the wheel or manage speed. Systems that do require a little bit of steering input are often doing so because they want to verify that the driver is paying attention and is ultimately ready to take over in the event that the system asks them to. SuperCruise confirms a driver’s attention through the use of a camera mounted just above the airbag pad in the steering wheel. This camera is always watching the driver and is looking for a number of factors including eye position and head position to determine if they are paying attention and ready to take over should they need to. When the system is confident that those conditions are met, SuperCruise is one impressive chauffeur. Not only will it slow down and speed up with traffic but it was arrow straight in every lane that we used it in. 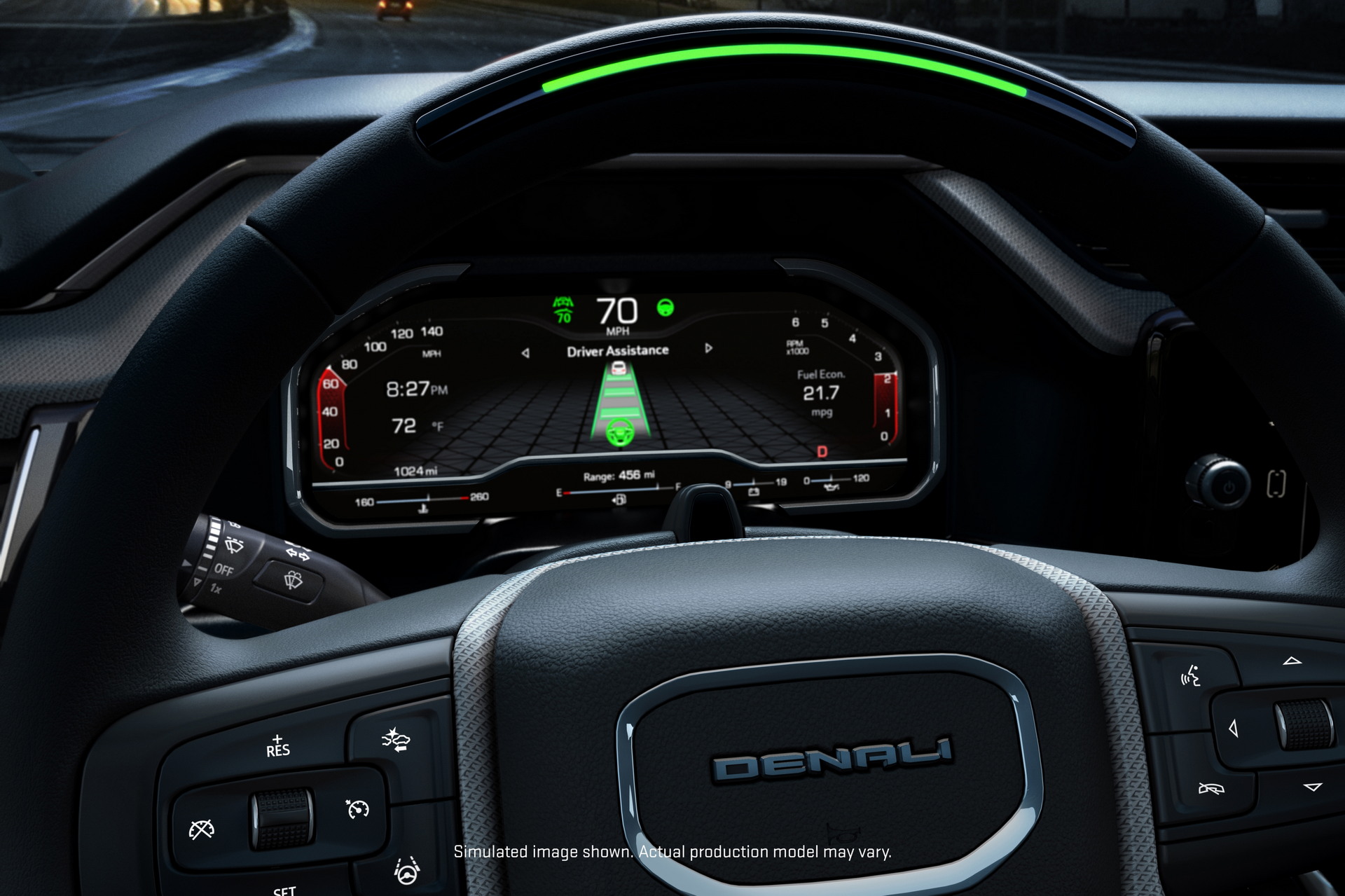 Additionally, an update for 2022 allows the Denali Ultimate to actually change lanes on its own when the right conditions are met. Say for example that your cruising speed is set to 70 mph but the car ahead of you has slowed to 60. If SuperCruise sees an opening in an adjacent lane it will turn on the blinker, move into the lane, and speed up as close to your set cruising speed as it can get. You can also tap the blinker yourself to initiate a lane change. Sitting in a bit of Californian traffic was no more stressful than sitting in a drive-thru line at your local fast food haunt.

Of course, there are limitations to SuperCruise that should be noted. First of all, it only works on select highways across the country so don’t expect it to take you anywhere in town or on city streets. In fact, it will disable itself pretty much as soon as you hit the exit lane on the highway. In addition, it’s not a perfect system in terms of practicality as some sunglasses can trick it into thinking that the driver is paying attention despite their eyes being away from the road.

Finally, should SuperCruise determine that the driver isn’t paying attention, it will basically do all it can with flashing lights and a vibrating seat to get the driver’s attention. The alerts become more intense as time goes on. If it doesn’t sense that the driver is back in control after an unspecified amount of time it will stop the vehicle in the lane that it’s presently in. Needless to say, a full-size truck parked on the highway could be a hazard both to those inside the truck and those approaching it.

When You Want To Do The Driving Yourself 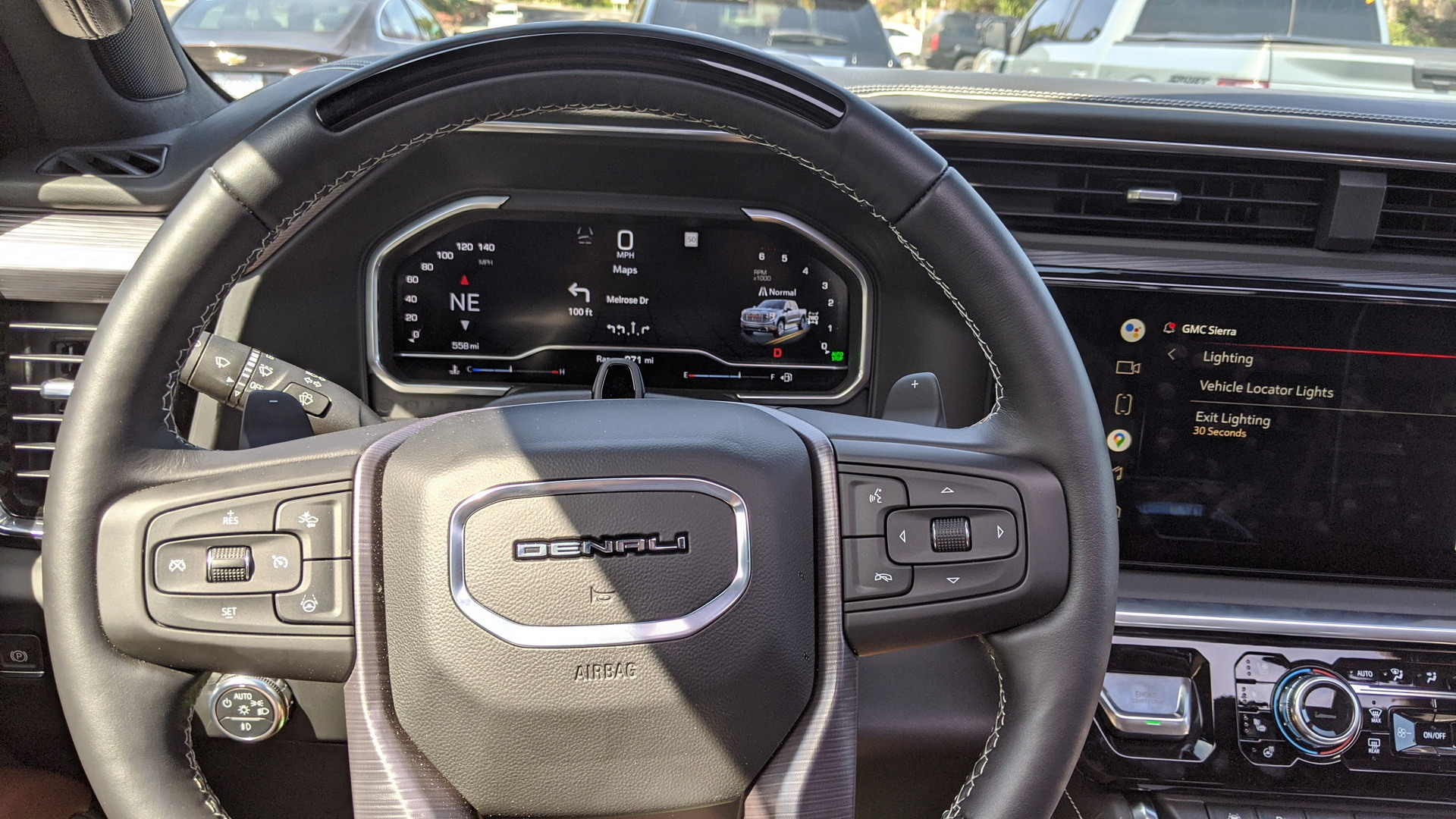 This is a big truck from every angle and it feels that way on the road. Visibility is good but it’s tough to place exactly where the edges of the truck are without a little time to acclimate to its proportions. Once that’s completed, the Sierra Denali Ultimate feels as sublime to drive as many vehicles that start in the six-figure range.

While it might not have the same Multimatic DSSV dampers from the AT4X it honestly doesn’t need them. This big truck offered excellent dampening from poor road conditions without issue. Feedback through the steering wheel and pedals was good too. It’s easy to tell what’s going on at the front tires throughout turns and when pushed hard the Sierra Denali Ultimate communicates traction loss appropriately. It was almost a foregone conclusion that it would drive well but sometimes brands will rest on their laurels. We’re happy to report that GMC didn’t do that with this truck.

A Mighty Gasoline V8 Or A Thriftier Inline-Six Diesel 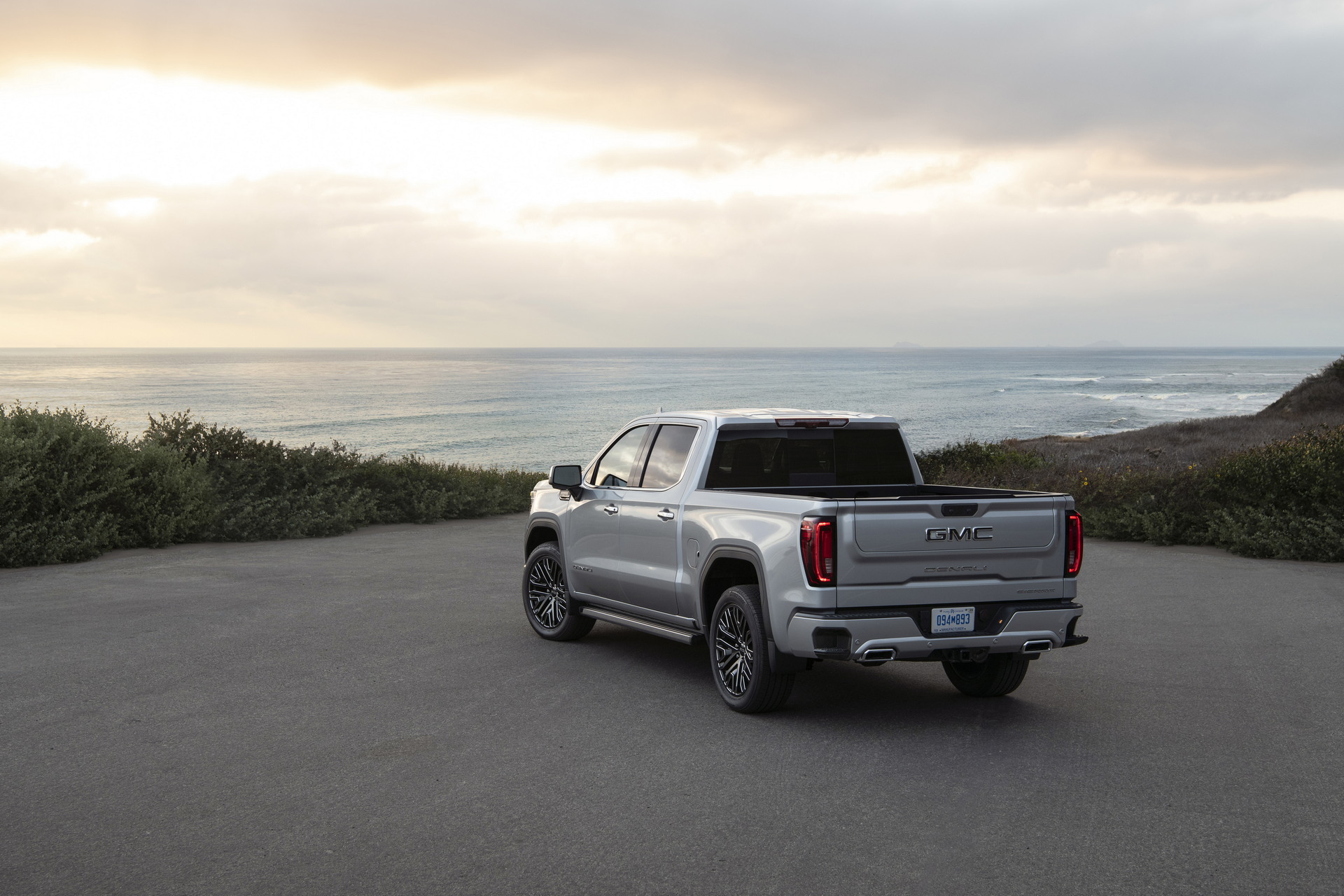 The premium full-sized truck market is stronger than it’s ever been. Of course, it hasn’t existed for all that long but that makes the standard set by the Sierra Denali Ultimate all the more impressive. No, it’s not affordable – its $82,795 price tag proves that. But it’s tough to argue that you’re not getting a lot for that cash. In many ways, it feels like a well-made luxury SUV that has the added benefit of a bed in the back.