Late last month, we reported on a fire in Bridgewater, Massachusetts that engulfed a Lucid Air that was being transported on a trailer. We have now been allowed to read the full incident report from the fire department, which confirms that the electric vehicle being transported was not the cause of the fire.

According to the report, whose author was on the scene, interviewed witnesses, and consulted security video footage, a truck towing a car carrier with a Lucid Air inside pulled up to a rest stop at around 10:00 pm on April 22. The driver said that he and his wife had stopped to use the restroom and to grab a coffee.

Read Also: A Lucid Air Dream Edition Was Burnt To A Crisp On A Transport Truck In Massachusetts 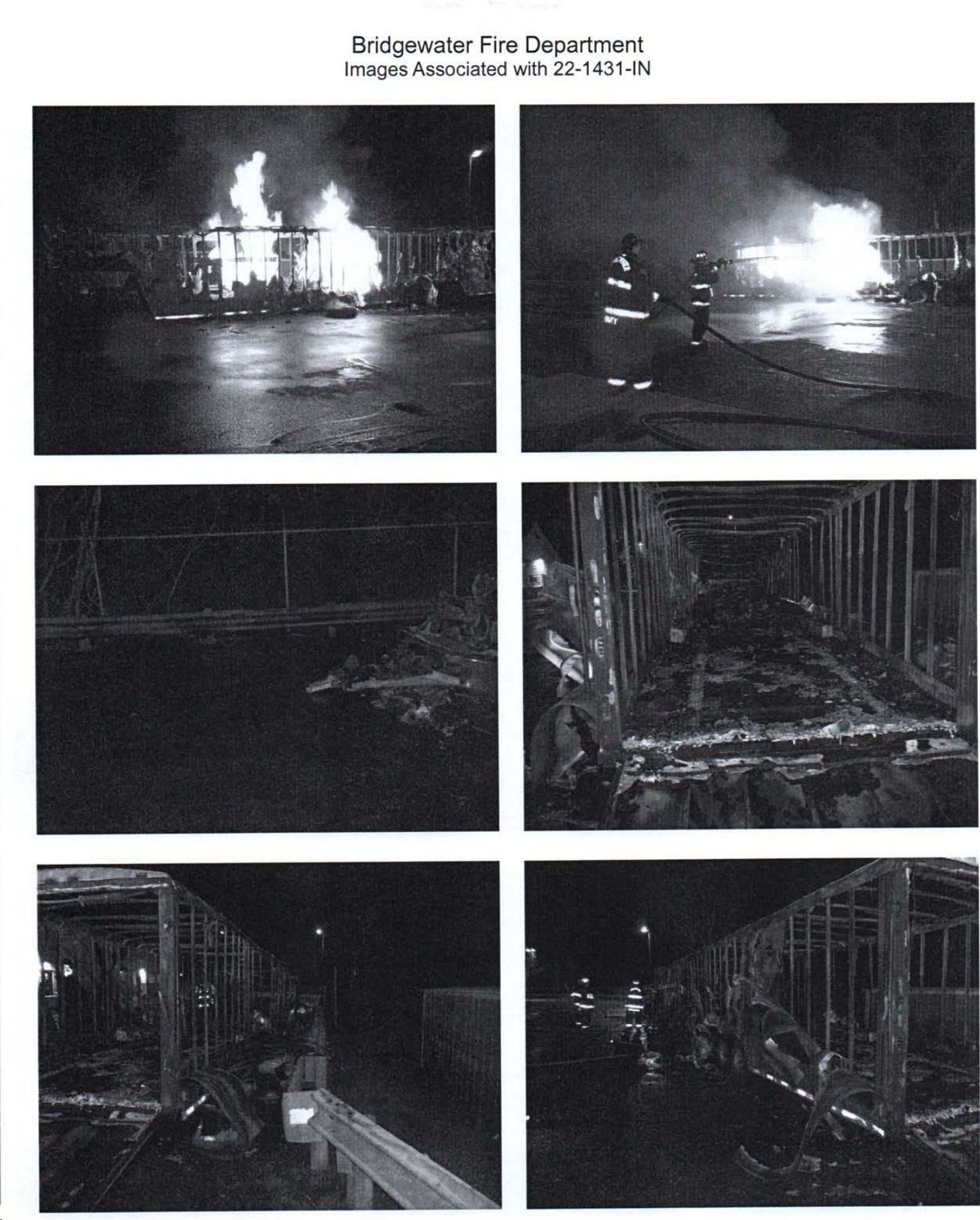 The driver then went to the cab of the truck in order to retrieve his wallet and his dog and subsequently went into the rest stop building to call 911. By the time fire crews arrived on the scene, the truck was completely engulfed in flames, which were spreading to the trailer.

According to the report, security video from the area reveals that it took the flames just three minutes to consume the truck and spread to the trailer. Once the fire got there, a spare tire appears to have exploded out of the top of the trailer and landed on the ground outside.

Although the fire was not started by the Lucid Air, its batteries did experience thermal runaway, which complicated efforts to extinguish the flames. Once crews had put out the fire in the truck and the trailer, popping could be heard from under the EV, which sounded like fireworks going off and the trailer was in flames again.

Crews worked to extinguish the fire to the extent that was possible before using a tow truck to pull the car from the trailer and prop it up against its ramp in order to make cooling the batteries easier. Even then, with the car out of the trailer and lifted to make the underside of the vehicle more easily accessible, though, the crews report that reaching the battery cells was difficult because of a carbon fiber panel that protected the battery pack. It wasn’t until the fire had compromised it that crews were able to breach the panel and put water on the cells to cool them. Eventually, the crews requested a “roll-off dumpster” in which to put the Lucid. 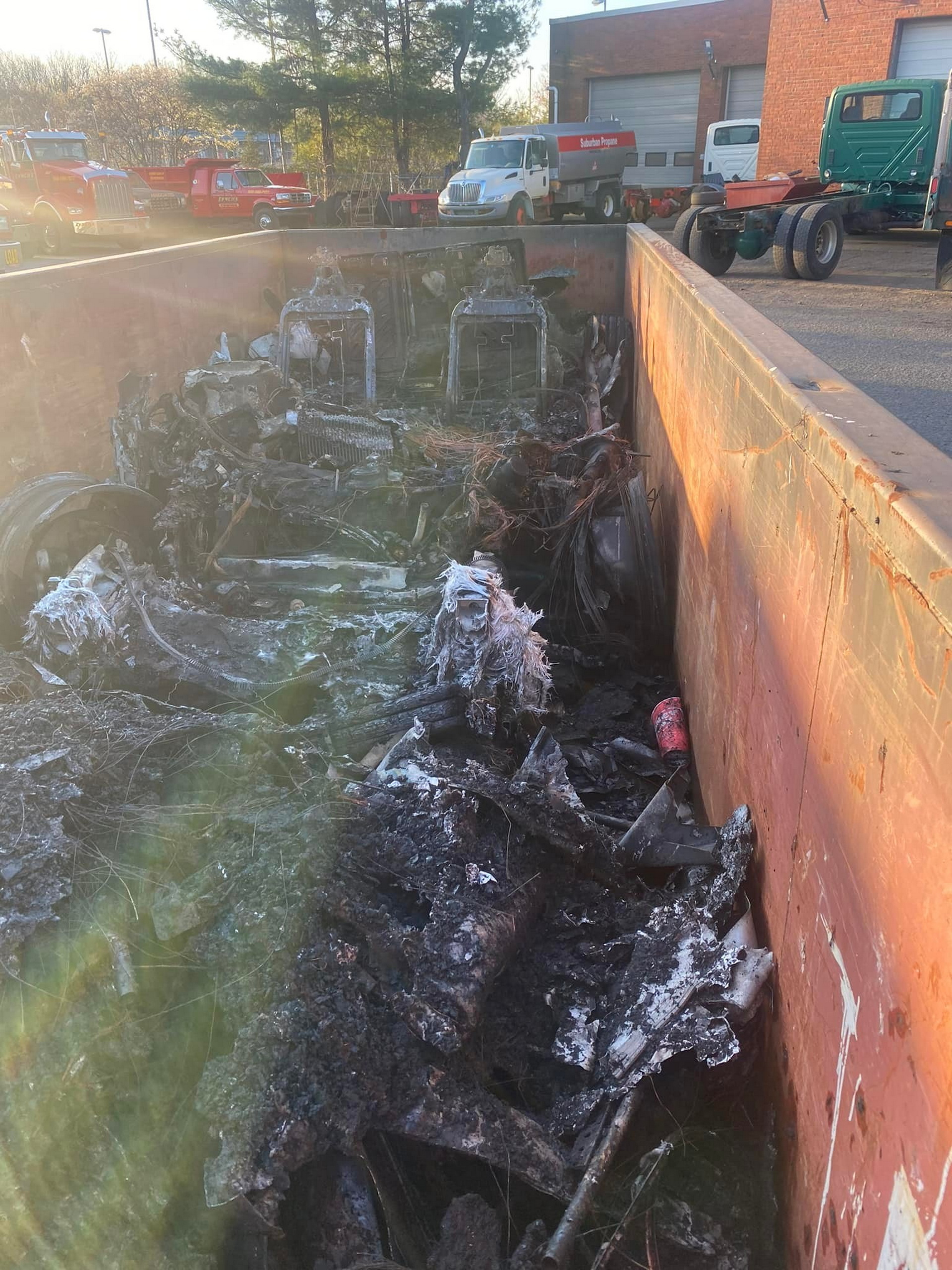 The dumpster, the department reports, made it easier to contain the vehicle in the event of re-ignition, would protect other vehicles at the tow yard once it was pulled away from the scene, and would contain the vehicle while it was being towed to the tow company’s storage yard. There is no mention of crews using the dumpster to “drown” the car, as had been previously been claimed by a witness.

Further complicating extinguishing efforts was the fact that the fire didn’t occur near a hydrant. In all, crews used more than 8,000 gallons of water to put out the fire in the Lucid. “This is important due to the lack of fire hydrants on the highways and service areas and the resources needed for future events of this type,” Lt. Craig Nedell wrote in the report.

We have reached out to Lucid for a comment and will update this story when we hear back.

Despite being 55 feet (17 meters) from the nearby rest stop, the flames from this incident were hot enough to melt the building’s aluminum siding and crack some windows. Fortunately, there were no casualties as a result of the fire.