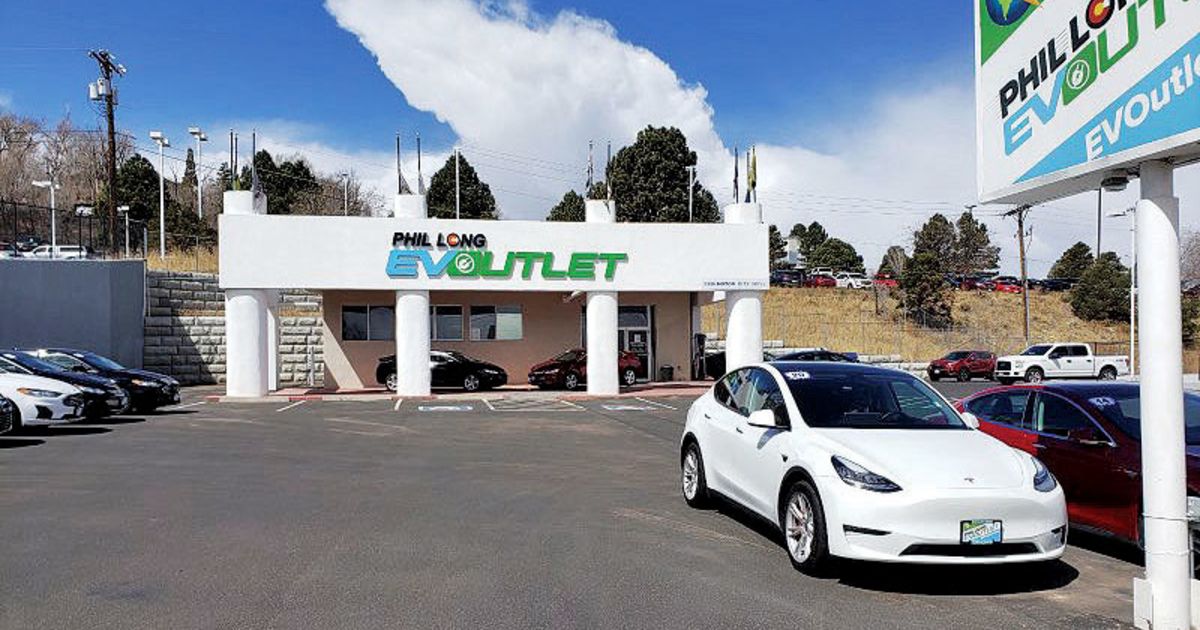 Leaders at Colorado’s Phil Long Dealerships have seen consumer interest in electric vehicles grow and know the forecast from automakers is for many more EVs well into the future.

So they opted to convert a vacant site in Colorado Springs, Colo., near several of the group’s franchised dealerships, into a used-vehicle-only dealership focused exclusively on EVs and hybrids. And the venture has proved profitable.

“All that new product pipeline coming down the road really brought home to us that we’re living in a time right now where it’s the least amount of electric vehicles on the road right now for the rest of our lifetimes,” Kevin Shaughnessy, Phil Long’s vice president of dealer operations and partner, told Automotive News. “It’s going to continue. It’s only going to get bigger and bigger and bigger.”

The Phil Long EV Outlet opened in May 2021 and has expanded monthly sales, which now range between 18 and 22 vehicles a month, up from 12 to 15 in the store’s early months, said Peter Buckles, general manager of the store.

“Every month it seems like it goes up just a bit, especially since gas prices are on the rise,” he said. “It seems like there’s been more interest in electrical vehicles just in the past few months.”

“One of the barriers for a lot of people is the price on EVs,” Shaughnessy said. “We noticed that there was a market for acquisition of EVs at a much lower price.”

Phil Long EV Outlet sold 117 electric and hybrid vehicles from May 2021 through year’s end and 56 such vehicles during the first three months of 2022. It’s just a small fraction of the company’s total sales. Phil Long Dealerships of Colorado Springs ranks No. 95 on Automotive News‘ list of the top 150 dealership groups based in the U.S., with retail sales of 10,801 new vehicles in 2021. The group sold 12,070 used vehicles last year.

Buckles said Phil Long EV Outlet is not only a one-stop shop for customers looking for EVs; it also has become a spot where EV drivers can recharge their vehicles for 20 cents a kilowatt-hour. The lot has 10 EV chargers, including four fast chargers.

Inside the store, those customers — some who find the chargers via navigation systems and hop off nearby I-25 — can grab a drink and relax, Buckles and Shaughnessy said.

“We built it different than a traditional used-car dealership,” Shaughnessy said. “It’s built more like a community lounge. It’s intended to be a place where customers can park their cars, charge them [and] hang out.”

The store last month held an Earth Day-focused event that Phil Long leaders planned to give community members test drives in EVs and more information about charging. The aim was that more information and exposure to EVs could ultimately drive shopper traffic to the store.

Buckles, who also oversees a nearby Kia dealership for the group, said Phil Long EV Outlet has three sales specialists and a sales manager. Service is available at the Kia dealership, he said.

Shaughnessy said he thinks the EV outlet is rare. “We might be the tip of the spear on this,” he said.

An estimated 20 percent of the store’s sales so far are to buyers who live outside of Colorado Springs, Buckles said.
“We’ve sold Teslas to people that actually live in Florida,” he said. “They’ll come out here, buy the car and drive it back.”

Buckles said the dealership searches daily across the country for EVs to buy and has purchased vehicles from sellers in California, Florida and New York. He said he also buys EV trade-ins at wholesale from local dealerships and through the Phil Long network.

Shaughnessy, who drives a Mach-E, said Phil Long’s leaders think the EV outlet is capable of selling 50 vehicles a month.

“As we grow to that, then we’ll start looking at expanding, maybe adding a second location or relocating into a larger space,” he said.

Ford to end car production at German plant, will seek ‘alternative opportunities’ for operations
Gas Station Manager Fired For Mistakenly Listing Gas At $0.69 Per Gallon Instead Of $6.99
The $4,500 electric car tax credit bonus for union-made EVs is not on the table anymore
Former BMW CFO plans rapid expansion in electric van sector including U.S. plant
Where do G7 countries like the US, Japan, and Germany stand in their shift to clean energy?