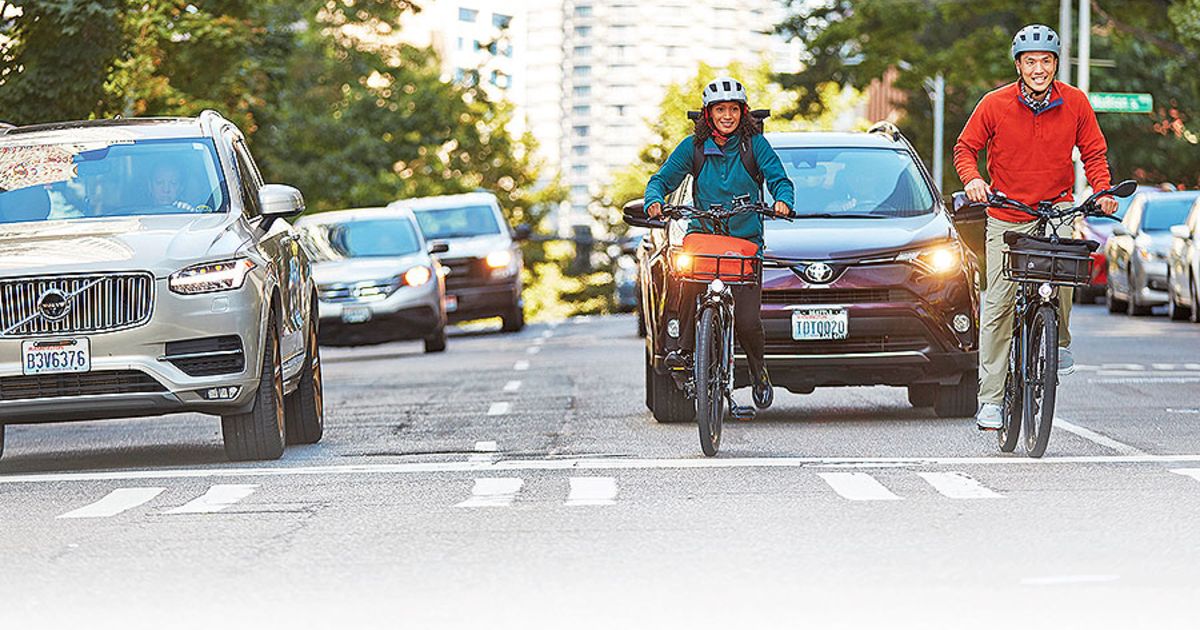 Rising gasoline prices have prompted some commuters to consider ditching their cars for e-bikes.

Both sales and general interest in e-bikes and scooters have increased, according to several micromobility companies, since Russia’s invasion of the Ukraine sent gasoline prices soaring. With commuters seeing benefits ranging from financial savings to health improvements, experts are wondering whether the uptick might stick over the long term.

Even before prices at the pump started to rise, e-bike sales were on the rise, climbing 26 percent in the U.S. between 2020 and 2021, according to a Deloitte report issued in March. The U.S. e-bike industry is annually worth $2 billion today, according to research firm Guidehouse Insights, which expects that to more than quadruple to $8.7 billion by 2031.

“A lot of e-bike retailers and distributors have noted a big spike in interest and purchases, especially in the last few weeks, with rising gas prices,” said Ryan Citron, principal research analyst for Guidehouse Insights.

“That’s changed, especially in the last few months; people are getting bikes for transportation,” he said.

Jeff Neibler, who owns two Pedego stores in northern Ohio, is a former general manager of three auto dealerships that sold Chevrolet, Buick, Cadillac and Ford brands and used vehicles. After nearly four decades in automotive sales, he knew he could apply what he learned to alternative forms of transportation. He opened his first Pedego store last July in Sandusky and is in the process of opening a store in Toledo.

Deloitte noted that while enthusiasts use e-bikes for round trips of 30 to 35 miles, approximately 60 percent of trips in the U.S. were five miles or fewer, a distance easy to manage on an e-bike.

E-bikes typically have a range of 40 to 70 or more miles on a single charge that costs about 20 cents, according to Citron. The average price for a gallon of gasoline was $4.17, according to the latest figures from U.S. motoring organization AAA.

“We hear often from riders who have decided to become a single-car household, or even replace their car miles altogether because of the trips they can do on their e-bike,” a company spokesperson said.

The latest industry growth is not just in e-bike sales, but also in shared e-bike programs, such as those offered by Lime and Bird. Shared programs allow people to use apps to pay for and ride fleet bikes for a period of time. In February, Lime saw a 67 percent increase in the number of rides taken in the U.S. compared with February 2021.

“As gas prices rise along with spring temperatures, people are choosing bikes and scooters more frequently to get around,” said Karolina Haraldsdottir, Lime’s head of operations for North America and Asia Pacific.

Bird, which offers e-scooters for shared use and personal ownership, says it saw a 30 percent increase in Web traffic from mid- to late February to mid-March, immediately following the initial rise in gasoline prices. In March, Bird had a more than 40 percent increase in the daily average of riders for its shared services in New York City and Washington.

“The industry is seeing increased demand for e-scooters and e-bikes as individuals are returning to offices and as tourism picks up — both at a time when gas prices are continuing to reach all-time highs,” said Brian Buccella, Bird’s senior vice president of government partnerships and consumer products.

Guidehouse Insights estimates that U.S. annual revenue from shared e-scooter services, the fees users pay for using the sharing programs, will be about $1.1 billion in 2022.

Beyond the micromobility companies themselves, some city and state governments are encouraging consumers to trade their vehicles for e-bikes by offering rebates and other incentives.

Bird’s blog, which uses the catchphrase “give gas the Bird,” cites some of these programs. Austin Energy customers in Texas, for example, are eligible to receive as much as $300 off a new e-bike. San Francisco Bay Area residents can receive vouchers worth as much as $7,500 from their local Air Quality Management District if they trade in their vehicle for a new e-bike.

Steve Gutmann, senior business development manager for Forth, a Portland, Ore., nonprofit that seeks to accelerate the adoption of electric transportation, says his company applied for $4 million in grants focused on e-bikes. If awarded, Forth will launch a program to promote e-bikes to front-line workers, helping them finance a purchase. E-bikes range from about $1,000 to $7,000 or more.

“Anybody who can unload a car and replace it with an e-bike is immediately going to find themselves saving their car payment, reducing or eliminating their insurance payment, and probably even canceling their gym membership,” Gutmann said.

Others foresee roadblocks to faster adoption of micromobility in the U.S. While 60 percent of U.S. respondents to a July 2021 McKinsey survey said they were willing to use some form of micromobility for their daily commutes, Kersten Heineke, partner and co-leader of the consulting firm’s Center for Future Mobility, stresses it’s too soon to detect long-lasting changes in commuter behavior. Even if gasoline prices double, he said, it won’t be enough on its own to persuade commuters to swap vehicles for e-bikes.

Heineke cites infrastructure changes as essential to make commuting with e-bikes a safer, more viable and attractive option. That would include long-term investments in more bike lanes, reducing the number of car lanes and making sure there are physical barriers between bikes and vehicles.

“It is not going to have a massive impact for the majority of the population,” Heineke said. “You could do a 15-mile commute by e-bike, but is it something you’d want to do, especially driving on roads not suitable for doing that?”