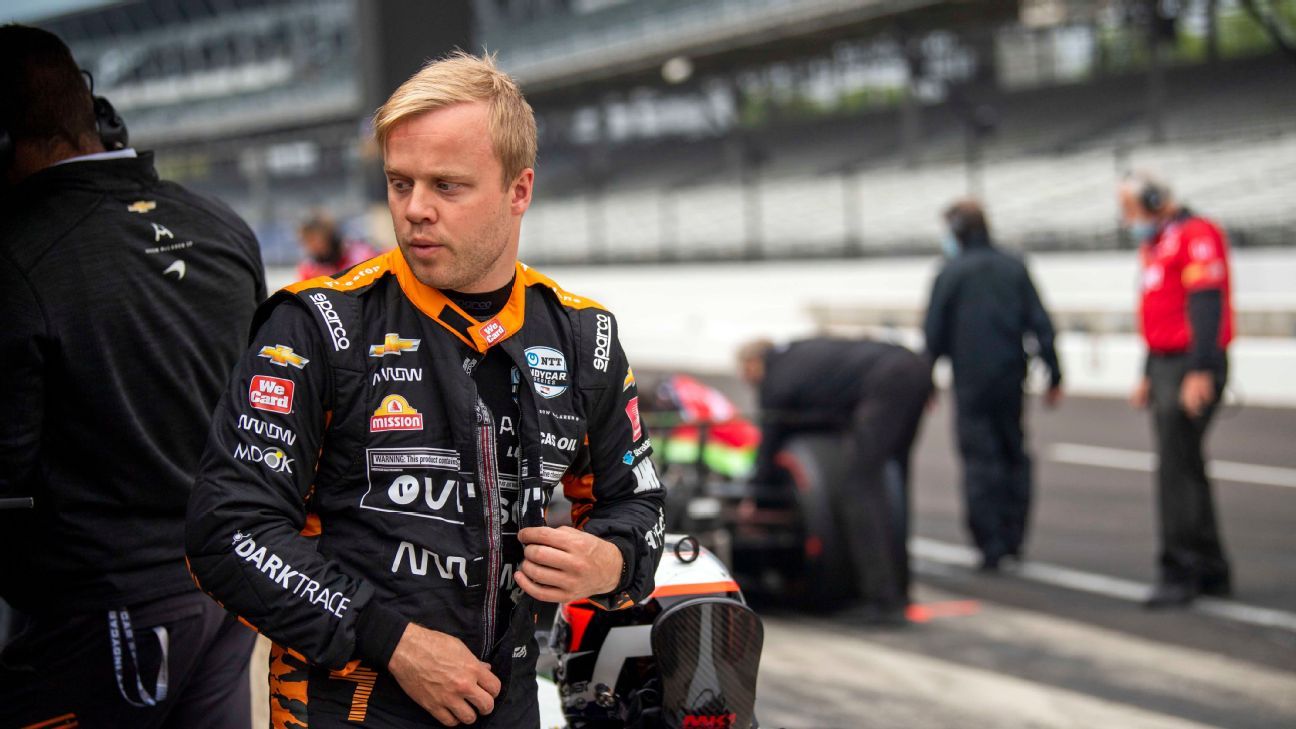 FORT WORTH, Texas — Felix Rosenqvist earned a much-needed pole Saturday in qualifying at Texas Motor Speedway, where IndyCar is desperately trying to develop a second passing lane in what could be the final race for the series at the track.

Rosenqvist turned two laps at 221.110 mph in his Arrow McLaren SP Chevrolet, and the time stood as 16 drivers tried to knock him off the pole. Scott McLaughlin, winner of the season-opening race at St. Petersburg last month, was the final driver to qualify and just missed bumping the Swede from the top starting spot.

McLaughlin went 221.096 for Team Penske, missing the pole but giving Chevrolet a lockout of the front row.

Takuma Sato qualified third in a Honda for Dale Coyne Racing and was followed by Team Penske driver Will Power as Chevrolet took three of the top four spots.

Jimmie Johnson, the all-time winningest driver at Texas with seven wins in NASCAR, qualified 18th in his IndyCar oval debut. It was his best qualifying effort in 14 IndyCar races.

For Rosenqvist, it was his second career pole since joining IndyCar in 2019. He is coming off a terrible first season with McLaren and said the qualifying run Saturday was a confidence boost.

“It’s been needed for a while,” Rosenqvist said. “Coming into this week, we always know we have a good car here, and I felt confident. There was no reason we shouldn’t be strong here.”

IndyCar has raced at Texas since the track opened in 1997, and Sunday will mark the 35th time the top open-wheel series in the United States has competed on the 1.5-mile oval. Attendance has dwindled over the years, and a track reconfiguration and accommodations made for NASCAR has made Texas a poor fit for IndyCar.

NASCAR and Texas officials use a traction compound in the turns to help create a second passing lane for NASCAR, but the PJ1 compound doesn’t match with the Firestone tires used in IndyCar, making a high line that is far too slick and dangerous for the drivers.

Few drivers dared to even coast into the second lane during Saturday morning practice.

The traction compound has turned recent IndyCar races into a single-groove, follow-the-leader snoozer, and Dixon routed the field in the first race last year. The second race was a bit more competitive with 12 lead changes among nine drivers before Pato O’Ward, a Mexican driver who lives in San Antonio, won his first career race.

IndyCar will attempt to make a second lane Saturday afternoon when seven drivers will go out for a 30-minute session to try to create grip on the track. Drivers remained skeptical, even those who plan to run the special session.

“I don’t think it’s going to be enough to put a grip up there,” said Castroneves, who will run the special session. “Right now it is super slippery, the speeds we are going, and there is no way we are going to be able to do two lanes. It’s just like painting a house; you can’t wash it and take it away.”

The contract between Texas and IndyCar expires after Sunday’s race, and there has been strong speculation that if the show doesn’t improve, the series won’t be returning. But IndyCar owner Roger Penske said early Saturday that’s premature talk.