Over the weekend a Tesla Model S was totaled after the driver launched it over the top of a steep road and crashed on the other side after hitting two vehicles. After fleeing the scene, Police have been searching for the driver of the Tesla that was rented from Enterprise. Now, detectives have told Carscoops who they’ve named as a person of interest and more about the cooperation that they’re getting from other involved parties.

Influencer Alex Choi posted a video featuring a Tesla meetup that he put on this weekend. In it, he shows a Model S accelerating up Baxter street in Los Angeles before it flies high into the air before coming down and crashing into multiple objects including two cars.

Despite a slew of online footage of the incident, the identity of the driver has yet to be confirmed and to that end, authorities publicized a $1,000 reward for information that leads to the driver being identified. Some of the posts in question have given the LAPD reason to name Dominykas Zeglaitis as a person of interest.

We are asking the public to no longer send us any more tips regarding @dominykasor We have reached out to him on his social media account. We are asking any witnesses to also come forward. pic.twitter.com/vFBASt8MQD

In a statement to Carscoops, Detective Calvin DeHesa from the LAPD said :”He is a person of interest and we would like to talk to but it’s unconfirmed whether he was driving or not. As of now, we are trying to talk to a different person that rented the vehicle.”

Zeglaitis goes by the handle ‘@durtedom’ on Twitter and ‘@dominykas’ on TikTok. He’s another controversial influencer and the posts that seem to implicate him the most are ones he’s made himself on TikTok. In the first of four different posts about the incident, Zeglaitis says “I don’t even know what happened last night.”

The next post shows the resulting damage once the Tesla came to a full stop but it’s the third where Zeglaitis directly ties himself to the incident. Not only does he seem to mock the police but specifically captions the post “LAPD didn’t like my stunt” while pointing at an article on the jump. His last post shows a news report and is captioned “we made it on the news!”

Others claim he wasn’t even there

Despite all of these posts it seems that Alex Choi, the person who uploaded the original video to YouTube, has distanced Zeglaitis from the incident saying “Durte Dom did not jump the Tesla – Not sure why he’s lying to everyone and saying he did – I was there, saw everything, and he wasn’t even there lol”.

Detective DeHesa also confirmed that the Tesla was rented from Enterprise in Culver City and that both the rental agency and Tesla itself are working with the department. He also said that he’ll update us with more information as it arrives. 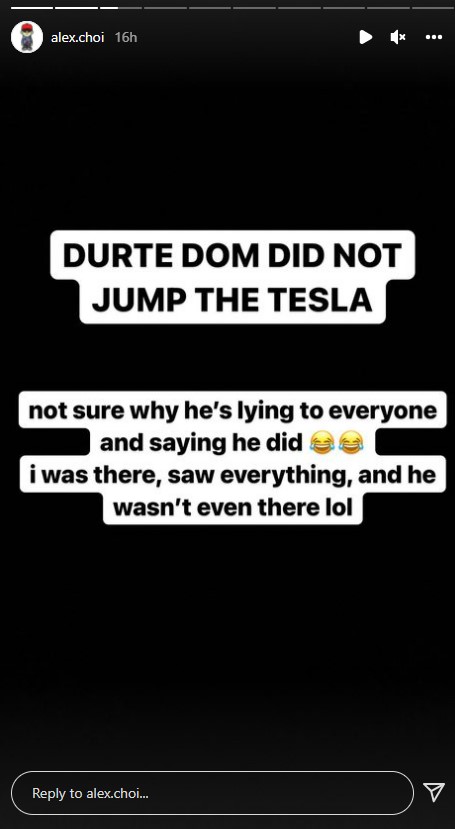