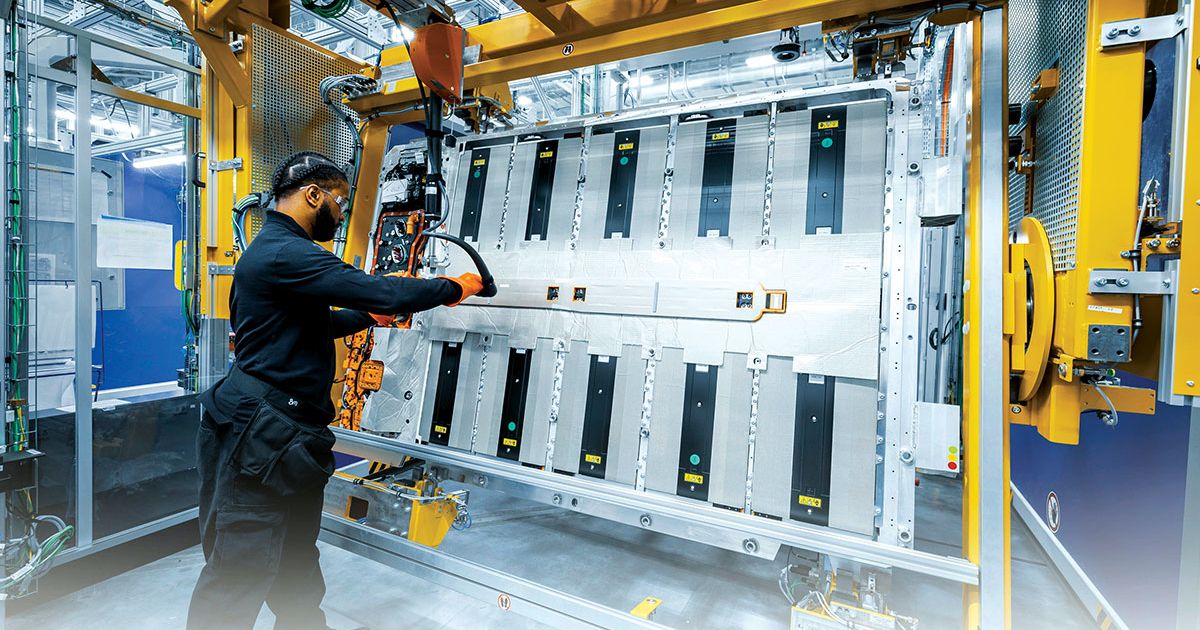 VANCE, Ala. — Mercedes-Benz’s U.S. assembly plant transformed the Deep South’s industrial base when it opened here 25 years ago. Now, the 6-million-square-foot manufacturing juggernaut is being reinvented for another new automotive era.

Mercedes last week set the stage for the U.S. mass production of luxury electric vehicles. The Alabama plant will be key to Mercedes’ intention to take the fight to EV kingpin Tesla. The German powerhouse plans to plow more than $46 billion this decade into developing an armada of electric sedans, crossovers and vans.

Vance, already a global export hub, could pump out more than 100,000 EVs next year: Production of the EQS full-size SUV should begin in June, while EQE midsize crossover assembly will start in October.

Last week, at an event attended by Mercedes’ top brass, the company opened its new battery pack plant and said it will begin sourcing battery cells in the U.S. by mid-decade to power the wave of EVs.

The Japan-headquartered battery supplier Envision AESC will build a U.S. factory to supply a new generation of battery components for Mercedes.

“It was our plan all along … to have dedicated cell production in the U.S.,” Mercedes-Benz CEO Ola Källenius said. “AESC was an absolutely perfect fit on the technological side … [and] their commitment to our brand building a dedicated facility for us.”

Mercedes is taking a pragmatic approach to secure battery capacity. Rather than invest billions of its own dollars in brick-and-mortar battery manufacturing, the automaker is partnering with suppliers to create a network of eight cell factories globally.

“We do not have to own all these industrial assets,” Mercedes-Benz Chief Technology Officer Markus Schäfer said. “We don’t have to control the production process. That doesn’t make a difference for customers.”

“General Motors, Ford, Stellantis have higher annual production volumes,” Abuelsamid said. “They’ve made a strategic decision that they want to own some of that manufacturing capacity.”

Batteries are the new battleground in the EV age, and automakers are scrambling to commercialize technologies that will give them a financial and performance edge.

“We’re fully vertically integrated on the R&D side,” Källenius said.

“We want to have control over the main technologies because a Mercedes is a Mercedes, and it needs to deserve the star. We think we know best what the brand promise technologically means.”

It’s clear why Källenius is focusing Mercedes’ resources on technology in the EV era: The CEO said that the auto industry would be “turned on its head” in this decade by electrification and software.

“If you have the ambition to be a leading innovation tech company … you have to double down on these two technological spaces without forgetting all the other stuff you learned over the last hundred years,” Källenius said.

But Mercedes executives were tight-lipped on what battery technology Envision will deliver them.

“I’m not going to give you the recipe,” Källenius said, noting that the Envision-built batteries will power Mercedes’ next-general EQ models,

But Mercedes has been working on energy-dense chemistries geared toward long-range models. The automaker also is investigating less expensive but less powerful lithium-iron-phosphate (LFP) batteries for its entry-level models.

Automakers are interested in LFP because it eliminates nickel and cobalt, Abuelsamid said. Nickel represents the single most significant chunk — about 40 percent — of cell cost.

The absence of nickel also makes LFP cells extraordinarily durable and stable. “You can take an iron-phosphate cell and drive a nail through it, and it won’t have a thermal runaway,” Abuelsamid said.

Envision AESC has more than a decade of experience building battery cells. The company started as a joint venture of Nissan and NEC to produce batteries for the Nissan Leaf, with a full-scale battery cell and battery pack assembly plant in Smyrna, Tenn., 230 miles north of Mercedes’ Alabama operations.

But when expected demand for the Leaf did not materialize, Nissan bought out NEC’s stake and later sold a majority stake in the company to China’s Envision Group.

Envision has cell manufacturing deals with Nissan and Renault in Japan, France and the U.K. and aims to have more than 300 gigawatt-hours of capacity by 2030.

Envision has produced “hundreds of millions of cells,” Schäfer said. “It’s impressive to see their knowledge about series production, their attitude toward safety and quality.”

“OEMs are interested in diversifying their supply base, so they’re not dependent on any single company or region for geopolitical and logistics reasons,” Abuelsamid said.

Envision could announce the location of its battery cell factory early next month, a spokeswoman with the supplier told Automotive News. It will likely be near the Vance assembly plant because vehicle batteries are heavy and expensive to ship.

“Most automakers are working to establish cell supplies that are generally within a few hours’ driving distances of the vehicle assembly,” Abuelsamid said.