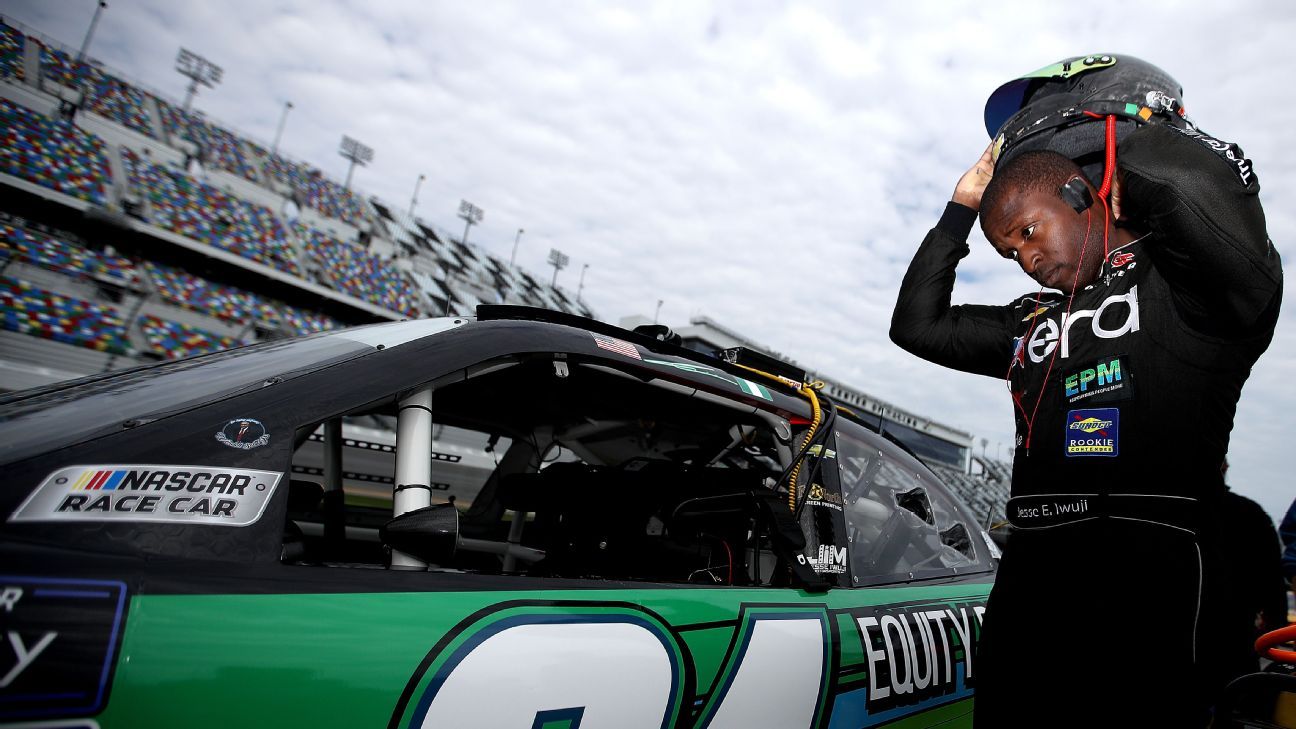 NASCAR Xfinity Series driver Jesse Iwuji credits his Nigerian parents for his discipline and success, which has seen him play D1 college football, serve in the US Navy for seven years, and become co-owner of Jesse Iwuji Motorsports.

Lieutenant Commander Iwuji, who will race in the Emmett Smith-co-owned number 34 Chevrolet at Atlanta Motor Speedway this weekend, told ESPN that his immigrant parents brooked no arguments when it came to his education… or keeping out of trouble.

The Navy Reservist told ESPN: “I remember in 7th grade, the first time I got a C on my report card, it was like the end of the world for us. I quickly understood that I need to get my grades up. I’m smarter than that, I’m better than that.

“Every Nigerian parent tells their kid, ‘You have to be a doctor, lawyer, engineer that’s it, nothing else. There are no other jobs in the world’. But that’s good. As a kid, I didn’t fully understand it at that time. I felt our parents were just really hard on us, but I’m happy they were like that.

Being a ‘grinder’ has served Iwuji well, both in the military and as a Black man in a predominantly white sport. NASCAR has just two Black full-time national level drivers, Bubba Wallace in the Cup Series being the other, and Iwuji hopes his hard work will shine a light on African achievements.

He added: “African Americans have done a lot, not only in the US or UK or Nigeria, but for the world.

“There’s been a lot of innovation and a lot of inventions, a lot of breakthroughs, a lot of cultural changes, because of Africans, and it’s great to highlight that.

“And the reason why we want to highlight it is because of all the turmoil that not just African Americans, but Black people in general around the world, have experienced, due to misunderstanding, due to fear, due to racism, due to colonialism.

“Black people, in general, have dealt with a lot. We’ve been enslaved for hundreds of years, our lands taken away from us, our resources taken away from us. It’s really important that we now take time to highlight our achievements, the positives.

And for those who say many of the injustices were in the past, Iwuji says there is a reason to keep it front of mind in order to avoid repeating that negative history, and to not forget that racial injustice is not, in fact, in the past.

NASCAR itself is only now starting to confront its own history, with Wallace, as recently as 2020, leading the campaign to successfully ban the Confederate flag from races. Iwuji wants to shoulder some of the burden that Wallace has carried on his own.

Iwuji added: “I know some of it was a long time ago, but some things are still happening now more than they should be. So, we should highlight that and just keep it in the forefront so that it doesn’t happen again. That’s why we have to [keep speaking up].”

Another reason Iwuji wanted to race at a higher level, after racing in the Camping World Truck series for four years, is to show youngsters that Black drivers can be successful, own teams, and race at the top.

“First there was one [Black driver], now there’s two, and hopefully there gets to be three, four, five, six,” Iwuji told The Associated Press in February. “It won’t grow unless people see that it is even possible.

“People ask me, ‘Why didn’t you start racing when you were a little kid?’ Well, I didn’t see Black people. If I didn’t see anyone in there, I couldn’t envision myself in there. I saw people like me in football, so I played football.”

As for his own experiences of racism in NASCAR, Iwuji teaches that parental lesson of education being paramount himself, rather than approaching any aggressions, be they major or micro, with more of the same.

He explained: “At least once or twice a year somebody will create some type of meme or do something that they think is funny and it’ll be really racist. Like, really racist.

“It’s a little upsetting that people still think that way, and they think it’s okay. How I deal with it is, if I can find the person I try to counsel them, and say, ‘Hey, what was going through your mind when you made this? What made you feel like this was okay?’

“I try to figure it out, instead of just bashing them and telling them, ‘Oh, you’re stupid and screw you,’ and all that. I want to learn what goes through their mind to get to that point, because if I can learn that, I can learn how to stop it.

“I mean, I could scare the crap out of someone, but that’s not going to help the world. I can seek to understand first and then take that knowledge to figure out a way to eliminate the problem. So, that’s the approach that I typically take.”

This weekend at Atlanta Motor Speedway, Iwuji will make his fourth start of the Xfinity Series season. He has posted an average finish of 32nd and was forced to withdraw from last weekend’s event in Phoenix because of a last-minute Navy training obligation. While keeping an eye on the literal prize, he is keeping his larger goal in first place.

“Creating a pathway for more people to come after me, whether they’re male, female, Black, Asian, Mexican, white, whatever, all different races. I just want to create an opportunity-creating system for people who seek to achieve big goals and big dreams in the motorsports world.”