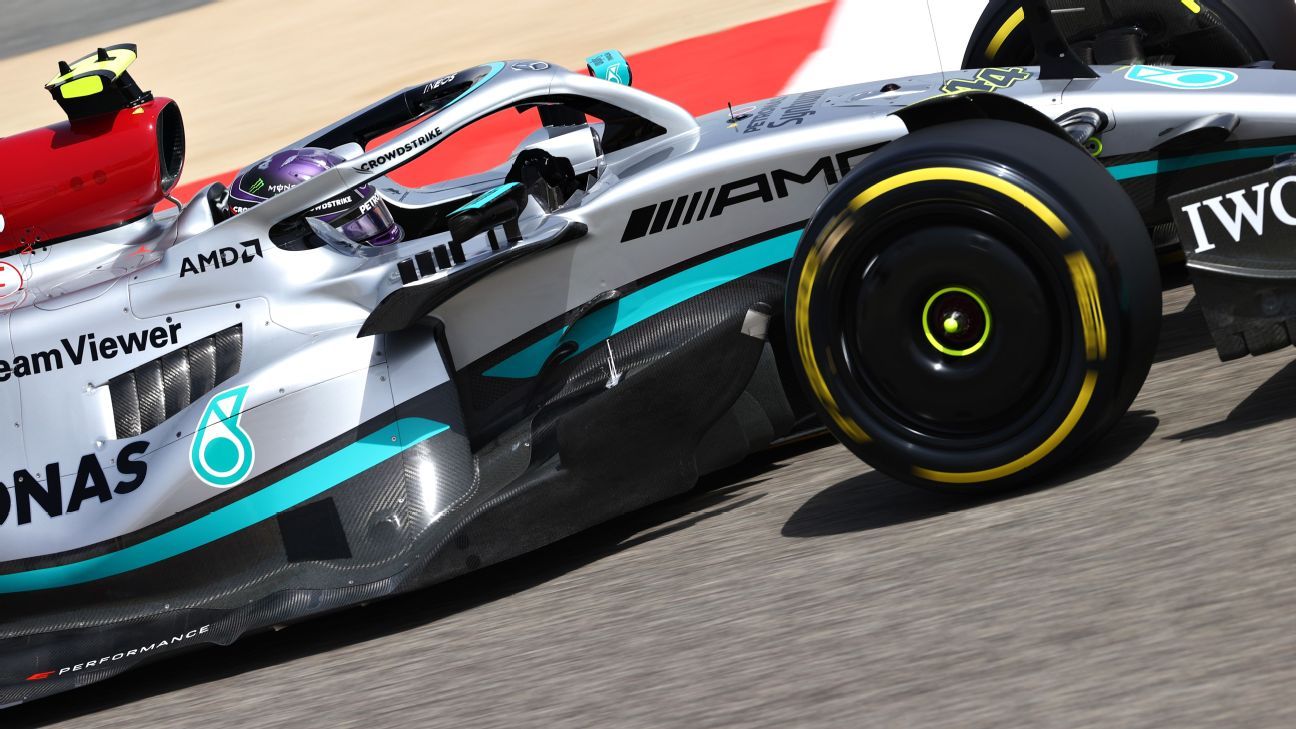 SAKHIR, Bahrain — In the space of Formula One’s two preseason tests, Mercedes has presented two very different versions of its new car. When the W13 left Barcelona after the first test it looked relatively conventional. When it emerged again in Bahrain for the second test it looked genuinely revolutionary.

The changes, which were mainly focused on the shape of the car’s sidepods, have not gone unnoticed by rival teams, leading to questions about the Mercedes’ legality after just one day of running.

Within two hours of the updated car leaving the garage for the first time on Thursday morning, Red Bull team boss Christian Horner was quoted by Auto Motor Und Sport, saying: “Mercedes have gone a step too far. That does not correspond to the spirit of the regulations.”

A Red Bull spokesperson later said the quotes were “incorrect”, before further clarifying that “no official comment” had been made by the team.

F1 motorsport boss Ross Brawn, whose team of engineers came up F1’s new technical regulations for 2022 to improve overtaking, admitted they had not considered Mercedes’ approach to the sidepods.

“There’s no doubt that the Mercedes concept, we didn’t anticipate, I don’t think,” Brawn told Sky Sports. “It’s a very extreme interpretation of the regulation and I think there’s going to be, inevitably, a lot of debate about their interpretation and that’s what happens with new regs.”

Although it looks dramatically different from the outside, under the skin the Mercedes does not appear to be a departure from the car that ran in Barcelona. The radiators, which are housed inside the sidepods, are still located in a conventional position, and photos of the car without its engine cover suggest the layout of the internals has not changed since the first test two weeks ago.

The bodywork draped over the car, however, has changed. The inlet to the sidepods has switched from a high, square opening to an inverted triangle. It’s almost as if a traditional sidepod design has been turned inward 90 degrees with the widest part of the inlet now against the floor of the car and the narrowest part at the top. The bodywork is moulded over the internals, sloping downwards to make what was already an ultra-slimline design even smaller.

It’s also striking how far back the leading edge of the sidepod starts on the updated W13. On rival cars the sidepods start in line with the front of the cockpit, but on the Mercedes they are much further back. This has resulted in the upper side-impact crash structure — which is mandatory on all cars and usually part of the sidepod — protruding ahead of the sidepod inlet. Mercedes has shrouded the crash structure in carbon fibre and it also provides the mounting point for the car’s wing mirrors.

Although the sidepod design has completely changed since the first test, it was not the work of a couple weeks. The novel approach has long been in the pipeline as a key part of the Mercedes’ design philosophy and has benefitted from as much development time as possible, meaning it missed the first test but was ready for the second. It is also the result of the eight-time constructors’ champions pushing the limit of what was previously considered possible.

“We are really proud of what we have achieved in terms of concept, but now we need to make it go fast,” team boss Toto Wolff said on Thursday. “It’s a development direction that we like and it’s now about tuning the car.

“We’re experimenting a lot and approaching it with curiosity.”

“I guess from my side, I’m proud to be part of a team that’s pushing innovation and all this hard work, you know, blood, sweat and tears going into it, seeing something pretty spectacular being pulled off is pretty incredible.

“But it doesn’t matter what it looks like, we need to see if it’s fast on track.”

What is Mercedes trying to achieve?

F1’s new regulations have thrown up a number of aerodynamic challenges for teams, one of which is how to deal with the messy airflow coming off the front tyres. As the tyres rotate, they produce a turbulent and unpredictable airflow behind them, which is bad news for the aerodynamicists who need a reliable flow of clean air to generate downforce from the car’s surfaces.

Under the last set of regulations, teams fought hard to control the wake from the front tyres and deflect it outwards away from the car. This was partly achieved by complicated bargeboards behind the front wheels, which helped guide the messy airflow out sideways away from the car. Powerful vortices created by the front wing were also used to manage airflow downstream and in some cases brake ducts served a secondary purpose by diverting airflow through the wheels to pull the tyre wake out sideways.

All of these solutions were good for the car in question, but created turbulent air for the car behind – something Brawn and F1 pinpointed as a barrier for overtaking. The idea of this year’s new technical regulations is to tidy up the airflow left by the car in front so that a chasing car loses less aerodynamic performance and has a better chance of getting close enough to make a move.

As a result, bargeboards have been banned on this year’s cars and the shapes of front wings are more strictly regulated. But aerodynamicists at teams still face the problem of messy airflow pouring off the front wheels and disrupting the aerodynamic surfaces further rearward on the car. Finding a solution to this problem seems to be why there is so much variation in sidepod design this year.

Mercedes’ approach is to make the sidepods as slim as possible in order to move them out of the wake of the front tyres and stop the messy airflow sticking to the bodywork and disrupting the aero downstream. The W13 design is clearly the most extreme example of this approach but it can also be seen to some extent on the Williams.

An alternative approach is to use a very wide sidepod to push the turbulent airflow out sideways, which can be seen in its most extreme example on the Ferrari. It’s two different ways of addressing the same problem, but at this stage it’s still too early to declare a clear winner.

“The front tyre is always a factor in car performance, it’s probably always been one of the biggest things aerodynamically to work with,” Mercedes technical director Mike Elliott told Sky Sports. “In the past we have had barge boards and things like that, which have been taken away from us, we’ve had through-axle flow, which is taking the brake duct flow and pushing it through the axle, which we can’t do this year, so now you’ve got to find other ways of achieving the same thing.

“For us, we have done that using the narrow sidepod layout to stop the front tyre wake sticking to the sidepod and being pulled in. Other teams will have gone through a route of pushing the sidepod out as far as they can to try and push it out that way. It’s two ways of trying to do the same thing.”

Is this a winning solution?

Ferrari team principal Mattia Binotto admitted Mercedes’ approach had caught his eye, but kept his cards close to his chest on whether his aerodynamicists back at Maranello had considered the same.

“No doubt it [the Mercedes] is a great car — that should not be a surprise to us,” he said. “It is a concept quite different to ours, quite interesting with the cooling layout and the sidepods.”

He went on to highlight the crash structure supporting the rear-view mirrors as one of the areas of questionable legality.

“On the mirrors, it was surprising,” he said. “We were not expecting that.

“We always said the mirror should have no aero purpose, and the way they treated their cars there is a significant aero purpose in the mirrors.

“The risk in the future is that all teams will start designing mirrors that look like spaceships. In the spirit of what we intend to do for the future, it is something we need to discuss.”

Wolff countered suggestions Mercedes had taken its design outside the spirit of the regulations, saying the team had been in constant communication with the FIA during the design process.

“It’s clear that sometimes when you come with an innovation it creates the kind of debate we’re having here,” Wolff said. “It was expected.

“We were keen in not running alone with our design, but being in touch with the FIA. That’s why I think it will be OK.”

Elliott added: “We’ve got a shape that’s legal and passes the regulations and we believe that the FIA is happy with. They’ve seen the CAD [Computer Automated Design]. As to how you turn that into the different shapes, everyone will have to look and try and work out for themselves what we’ve done and go from there.

“In this case, this is a step we found a little while ago and we have decided to add it to our car. Obviously when you do something very different you go and talk to the FIA first, and we have done that.”

But for all the focus on the visible parts of the new cars, it’s what you can’t see that will likely be the key to success this season.

The reintroduction of ground effect aerodynamics as a part of this year’s regulations means the underside of the car is where a lot of performance can be unlocked. After years of flat-bottomed cars by regulation, teams can now profile the underside of the car to accelerate the airflow underneath the floor, generating low pressure that sucks the car to the track. Again, this was part of the new regulations aimed at making cars less sensitive to running in the wake of a rival.

Mercedes’ upgrade in Bahrain came with hints of changes to the floor too, with modified inlets to the underfloor “Venturi tunnels”, which generate the low pressure under the car. The upper surface is designed to work in tandem with the underfloor and the new sidepods appear to be designed to help accelerate airflow over the diffuser at the rear of the car, which will help energise the flow underneath that is responsible for so much of the car’s downforce.

Yet it seems Mercedes still has some way to go to transfer the performance it has seen in its wind tunnel to performance on the track. Both drivers struggled under braking on numerous occasions on Thursday in Bahrain and chief trackside engineer Andrew Shovlin said there was plenty of work left to do over the final two days of the test to make Lewis Hamilton and Russell happy behind the wheel.

“Compared to Barcelona it’s been harder to get the car well-balanced around the lap here,” Shovlin said. “We do seem to have made a bit of progress through the day but it’s always difficult to judge accurately here as the falling temperature tends to flatter everything you do later in the day.

“We’ve got quite a lot of work still to do regarding validation of the update kit and will continue the data collection programme over the next few days so it’s a bit early to say whether everything is working as expected.

“There is certainly more to find in getting the balance right between slow and high-speed corners, and there’s also a bit too much tyre overheating. So, plenty to keep us busy for the next two days but we are on a steep learning curve with the new car and tyres – we’ll analyse what we have from today and hopefully make a step forward for tomorrow.”