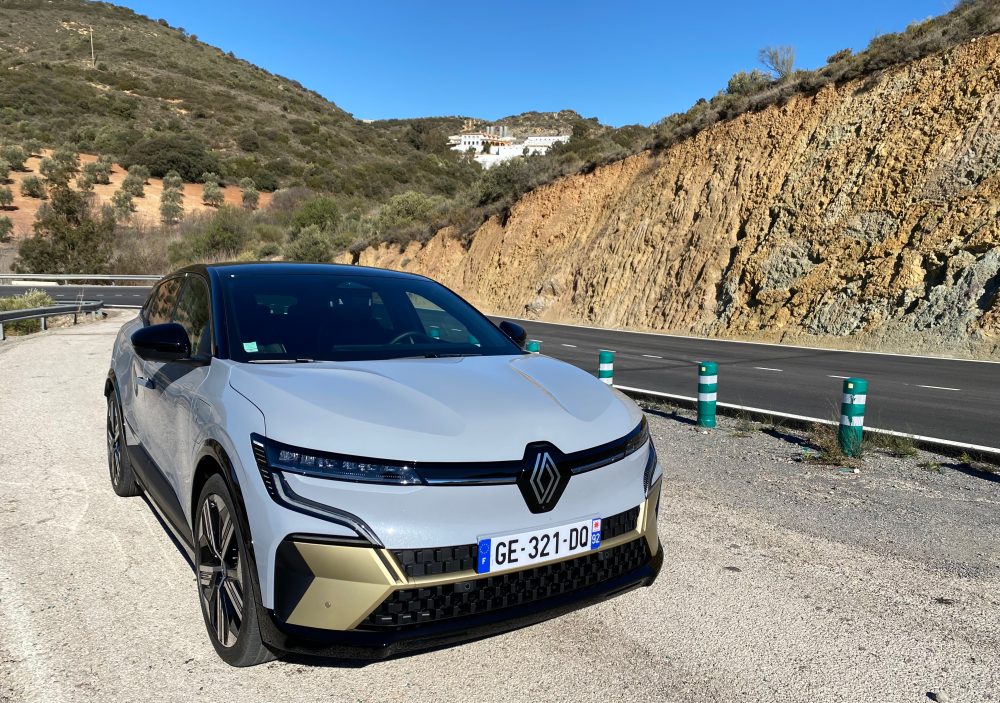 Renault’s new 100%-electric Mégane E-Tech is the French company’s non-hedged bet it can convince drivers they’ve nothing to lose in swapping their traditional ICE rides for modern a EV – and gain considerable performance, cost, and flair advantages in the bargain. A day test driving the car on the roads of southern Spain suggests the company stands a good chance of winning that wager and setting some standards for European EV development as it does.

Renault is in no way a newcomer to electric vehicles, having sold over 400,000 EVs since the 2012 rollout of its Zoe e-compact. Yet the Mégane E-Tech represents a veritable milestone in several ways. For starters, it’s the first battery-powered vehicle built using the firm’s common module family (CMF) platform, meaning it will inevitably influence later models. And while Renault is adamant the car is positioned to enter Europe’s C-segment at the top of the family hatchback class, its design, spaciousness, and operating chops may well convince some cross-over and the occasional SUV shoppers to reconsider their plans.

Indeed, as Renault staffers acknowledged when asked, the Mégane E-Tech is playing to several kinds of drivers and expectations at once. Conceived to provide the sound, solid, and powerful performance of a German-engineered car – rival Volkswagen ID.4, for example – Renault’s showcase EV is also an unabashed demonstration of French seductive flair. Its innovative design, stylish flourishes, myriad creature comforts, and various features play as much to the eye and heart as its emissions-free, sustainable, efficiently manufactured hardware and tech appeal to pragmatic buyer demands.

And it does so under the name of Renault’s most popular and recognizable Mégane model – but with everything in, on, or about it completely new and different.

Start with the rounded lines and sweeping surfaces that make the car look larger than its 4,199 mm L x 1,505 mm H X 1,768 mm W size. It’s also tricked out with thin LED lights that curve down the front of the car and into eye-catching trim in the bumpers on both ends. Another slick touch is in the door handles, which pop out from their flush position when unlocked or approached by the driver.

The car Electrek was given to test over 222 km. of roads north of Málaga sat on 20’’ wheels – which shrink to 18’’ on entry-level models ­– perceptibly elevating the driver, despite the car’s overall size having been reduced compared to previous Mégane models. The new EV boasts a 440-litre trunk capacity, not including the recharging cables stowed beneath in its own hidden compartment.

Though an eyeballing of the back seats from outside inspires fears of airline knee fracture experiences waiting to recur, once tucked into the 21 cm. of rear-passenger knee-room and 131 cm. shoulder width, the area is quite comfortable for the sub-NBA crowd.

Still, that deceptive roominess is nothing compared to the spaciousness of the driver and front passenger areas, which take full advantage of the Mégane E-Tech’s CMF-EV innovations. Central to that is a new, ultra-thin, 18 mm high battery created by LG designed to fit beneath the car’s CFM platform. The lithium-ion NMC units are 40% smaller than those in the Zoe, and enable the lowering of the car’s center of gravity while freeing up lots of internal area. That – plus placement of the motor in the front of the vehicle – cuts its overall weight to 1,642 kg, nearly 200 less than a 58kWh VW ID.4.

Once behind the squarish wheel that people seem to either love or hate, the driver faces a double bank of screens that gently wraps around. This OpenR console is made up of a 12.3-inch dashboard screen that swoops over to a 12-inch multimedia monitor gently angled towards the driver. The latter was developed with Google and is based on Android Automotive OS, and it has built-in Google Assistant, Maps, and Play apps, as well as Siri vocal command. Below the unit sits a smartphone shelf with an induction charger, which along with the many USB ports around the car should keep a medium-sized family and their devices happy during trips.

The car’s front and rear backrests and seat panels are entirely leather – entirely recycled, like the majority of materials in the Mégane E-Tech (batteries included). Anybody sliding into the car and feeling they’ve taken to e-slumming needs to return to their Taycan or wait for electric Bentley’s to roll out. Seriously.

What about actually driving the thing, you ask

The Mégane E-Tech comes with top-end 60 kWh battery and 450 km WLTP range, or entry-level 40 kWh alternative with a 300 km. WLTP max. A rapid charging station will restore 80% of that larger battery’s capacity in 30 minutes, or 20 for the smaller option; a 7kW domestic source will restore 100% of juice in nine and seven hours respectively or “overnight” in common parlance.

The model Electrek was given to test was a 60kWh, 220 hp version capable of 0-100 km/h (62mph) acceleration in 7.4 seconds – a surprisingly even, powerful punch that was highly appreciated getting around infuriatingly plodding trucks on southern Spain’s two-lane uphill highways. Should Porsche’s Taycan or Tesla Model S Plaid be sweating? No.

The car also offer four different driving modes – Eco, Comfort, Perso, and Sport ­– mixing different performance vs. energy consumption priorities. Though Comfort was fine in most situations, the Sport mode really accentuated the Mégane E-Tech’s responsiveness and curve-hugging handling. At the top of its game, the nearly silent car is total e-dope.

Though top-notch Renault, the Mégane E-Tech is perfectable

While driver acclimation and use will reduce the overload problem, Mégane E-Tech initially suffers from its surfeit of features. From OpenR functions to numerous driving modes and automated assistants, the array can be tough to juggle ­– and easy to eventually let drop. Especially confounding are features controlled by the multiple mini-pallets sprouting like artichoke leaves on steering wheel column. The rearview mirror that becomes a video screen fed by a back-end camera – in part to compensate for the car’s much reduced back window – also takes some getting used to.

Meanwhile, the car’s regenerative braking system that permits the battery to recuperate energy provokes noticeable degrees of deceleration when the driver’s foot leaves the e-pedal – a somewhat disconcerting sensation at low settings, and producing a somewhat lurching feel at the top one for new EV drivers. After a few weeks however, the one pedal driving often becomes preferable.

Even before the regenerative option is flicked on, meanwhile, the Mégane E-Tech’s brakes can feel a tad sensitive, and at times prone to some jerkiness. Again, this might be a preference for many.

Those are all things that driver experience (and possibly a bit of fine tuning by Renault) will remedy over time. A tougher buyer hurdle to clear will be the Mégane E-Tech’s price tag, which during rollout in Europe next spring will start at nearly $39,500, with full-option 60 kWh versions reaching $48,700. Clean energy subsidies offered by most European governments will reduce overall outlays in some cases by over 10%, but a hefty chunk of change will remain.

Renault is trying to add sweeteners to that, however.

As was the case with Zoe, Renault expects upwards of 85% of all Mégane E-Tech drivers to lease their cars, with monthly payments of $340 to $450 to offset what the company says will be about $160 in reduced monthly operating cost compared to conventional vehicles. To further blunt acquisition pain, Renault will offer leasing customers after-purchase options of free home chargers installed at their homes; pre-paid cards for use at commercial charging stations; or the option of borrowing other Renault cars free 20 days out of the year.

This is a sweet, punchy, impressive EV whose demerits are minor compared to overall performance, value, and satisfaction provided. Since the entry-level 40 kWh battery won’t often achieve the WLTP’s optimistic 300 km (186 mile) range, we’ll recommend most folks strap into a 60 kWh Mégane E-Tech unless this is a drive about town car.