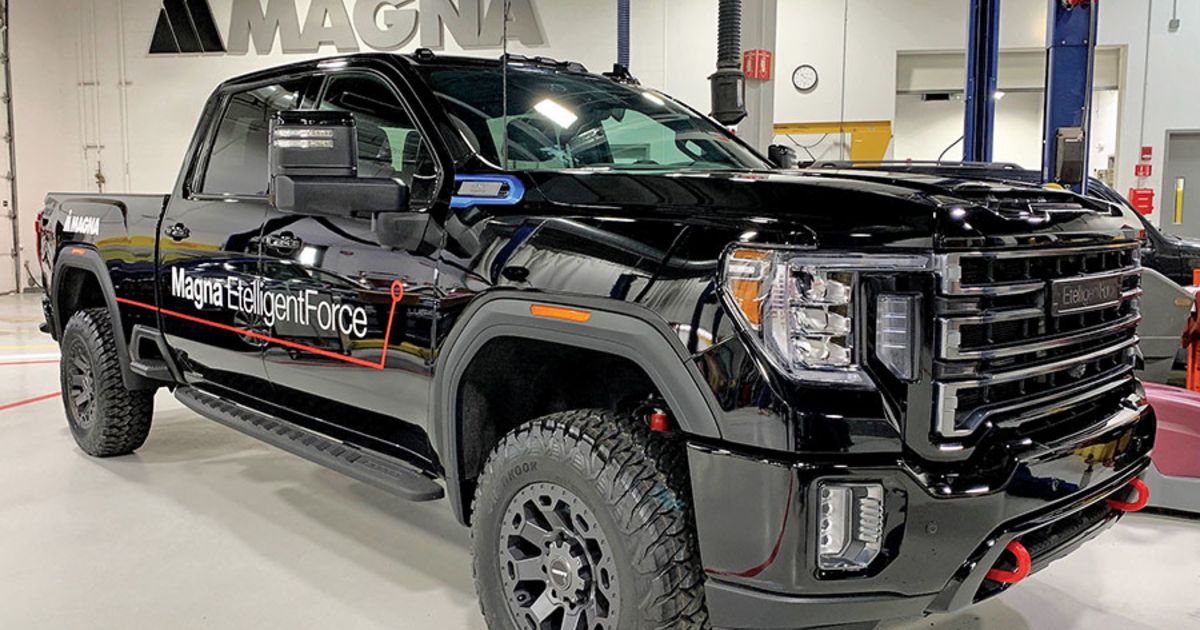 The supplier says its ability to offer complete systems to automakers, not just individual components, will be a key differentiator as it looks to do so.
“Having different systems come together and how well they interact with each other is going to be the significant value that Magna brings to the table,” CEO Swamy Kotagiri said at a media event this month.

As the small but growing share of electric vehicles in the global new-vehicle marketplace continues to expand, much of what Magna is developing is now tied in one way or another to EVs. According to the company, about 70 percent of its engineering projects are related to EVs, and Magna expects about 145 million EVs on global roadways by 2030.

Magna, of course, is far from alone in devoting significant resources to electrification. Automakers are pouring billions of dollars into EVs, and Magna’s supplier competitors are doing the same.

But Magna’s size and scope — developing everything from powertrains to seating and providing complete vehicle assembly for automakers — make it a unique case study in understanding how legacy companies are navigating a rapidly shifting automotive landscape.

“Although electrification began as a solution to address climate change and emissions regulations and requirements, we are seeing it more and more as a brand differentiator” for the automakers, Kotagiri said.

Magna, therefore, sees its role as supporting automakers with electric technology that will help them become more efficient and economical as they look to distinguish their EVs from dozens of others on the market in the coming years.

As an example, Magna this month highlighted its EtelligentForce battery-electric, four-wheel-drive powertrain system for pickups that it says can be implemented into automakers’ existing gasoline-powered trucks without having to upend their architectures.

“You can actually just drop it into a regular pickup truck,” said Tom Rucker, president of Magna Powertrain. “It uses the same points, the same suspension. You don’t even have to do major changes to your assembly line and manufacturing processes.”

It’s an example of how Magna hopes to provide value to automakers in the electric age, by offering solutions that can easily integrate with automakers’ existing technology, saving their customers precious resources in an era of sky-high R&D budgets.

Kotagiri said the relationship between suppliers and automakers will continue to evolve as EV technology develops.

“It’s important to have the balance to say, ‘I work with these OEMs; here are their strategies and here’s what I’m doing for them today, but here’s the path for the next step,’ ” he said. “It’s not just saying, ‘Tell us what you want and we’ll give it to you.’ ”

The Ontario-based supplier, which ranks fourth globally on the Automotive News list of top suppliers by worldwide annual sales to automakers, already has “significant content” on new battery-electric vehicles being launched worldwide, the company said during its fourth-quarter earnings call this month.

Among vehicles it will supply content for are the Ford F-150 Lightning electric pickup, the Rivian R1S electric SUV, the Cadillac Lyriq electric crossover and the GMC Hummer electric truck, as well as models by Volkswagen, BMW and Mercedes-Benz. In addition, the supplier’s Magna Steyr contract assembly unit will build Fisker’s Ocean SUV at its factory in Austria.

Kotagiri said the supplier sees the types of products and services evolving as vehicles become more electrified and connected.

“When we say Magna is a mobility company, we don’t constrain ourselves to say we’re only supplying systems and components,” he said. “That means we could play a role in the infrastructure management side, whether it’s data or data storage. As vehicles and subsystems become more connected, there is a play there.”

Data, in particular, will play a key role for Magna in the future as it looks to take advantage of a treasure trove of information being produced by vehicles and their components to learn how to make them more efficient.

He pointed to the company’s truck powertrain project as an example, saying sensors in the vehicle could be used to quickly gather data to make the powertrain work even more efficiently in wintry road conditions.

“It detects slip. It looks at traction every 10 milliseconds or so. Now, imagine you could do that predictively. That means I’ll need to work with the ADAS systems. Well, we do ADAS,” Kotagiri said.

“As different groups are talking to each other, we’re able to bring that consolidation of different systems and take advantage of that. That’s what I mean by data. I’m not talking consumer data. I’m talking about data that’s coming from the systems and how we can further optimize it to improve efficiency or safety.”