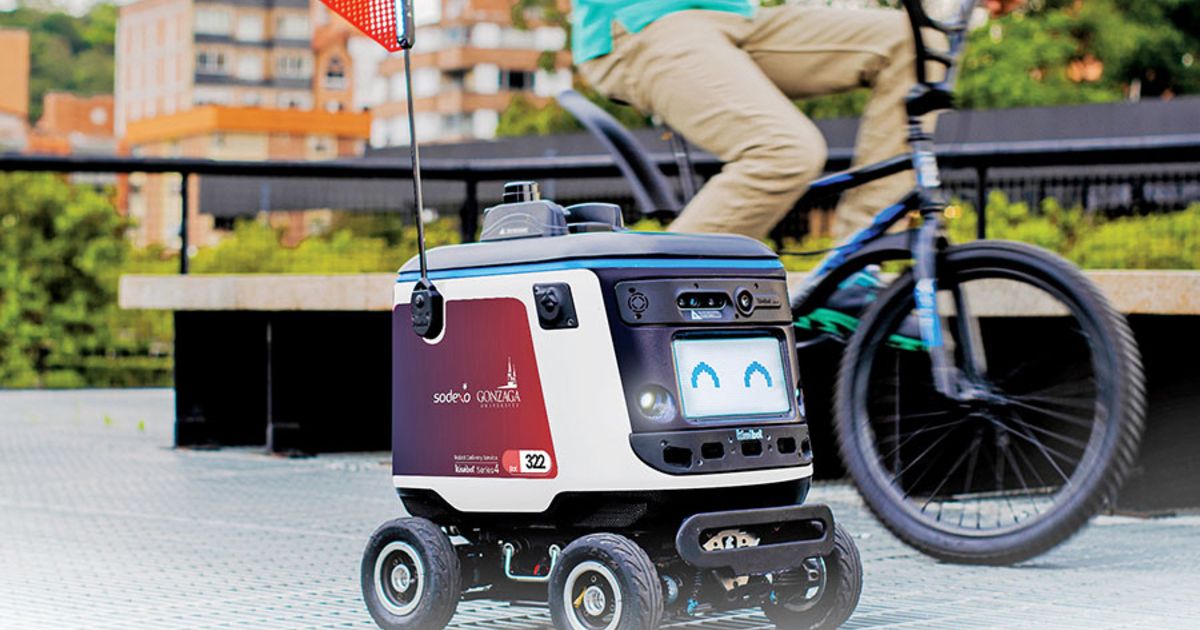 Kiwibot recently raised about $7.5 million in pre-series A funding from a group of investors, one of which is Sodexo. Among the other investors are venture capital firms Headline, House of Lithium and Gaingels.

A Kiwibot is about 3 feet tall and can carry four medium pizzas. It looks similar to Disney’s WALL-E robot, with a Japanese anime-inspired design. The four-wheeled robot features different faces and sounds to interact with humans.

Kiwibots travel on sidewalks to deliver food to college students from on-campus Sodexo-operated restaurants. The company has on-site supervisors who monitor the robots so they can approve street crossings and intervene with delivery or robot maintenance if necessary. A Kiwibot typically can operate about eight hours on a single battery charge, depending on use.

Students use their school meal plans or credit cards to pay for orders using a Sodexo app. No human delivering mean no tips needed for often cash-strapped college students.

“Not everyone can afford delivery,” Chavez says. “We are creating something for someone who does not [currently] use delivery.”

Chavez founded Kiwibot in 2017 in his hometown of Bogota, Colombia. Today, the company has more than 200 employees. It sources parts from China and the U.S., but robot design and assembly remains in Colombia.

Details for this business are not yet final, but the deal could have Kiwibots delivering in malls or communities. Chavez says the company expects to announce another partnership in the Middle East, but he couldn’t provide details.

In a collaboration with the Knight Foundation, Kiwibot gathers data about sidewalk safety in U.S. cities such as Detroit, Miami, Pittsburgh and San Jose, Calif. They report conditions such as damaged areas, obstacles and ramps that are in poor condition.

Kiwibot first piloted its food-delivery robots at the University of California, Berkeley.

“UC Berkeley was our first institutional investor,” Chavez says. “We have no robots [there] now. We’re working very hard to take them back.”