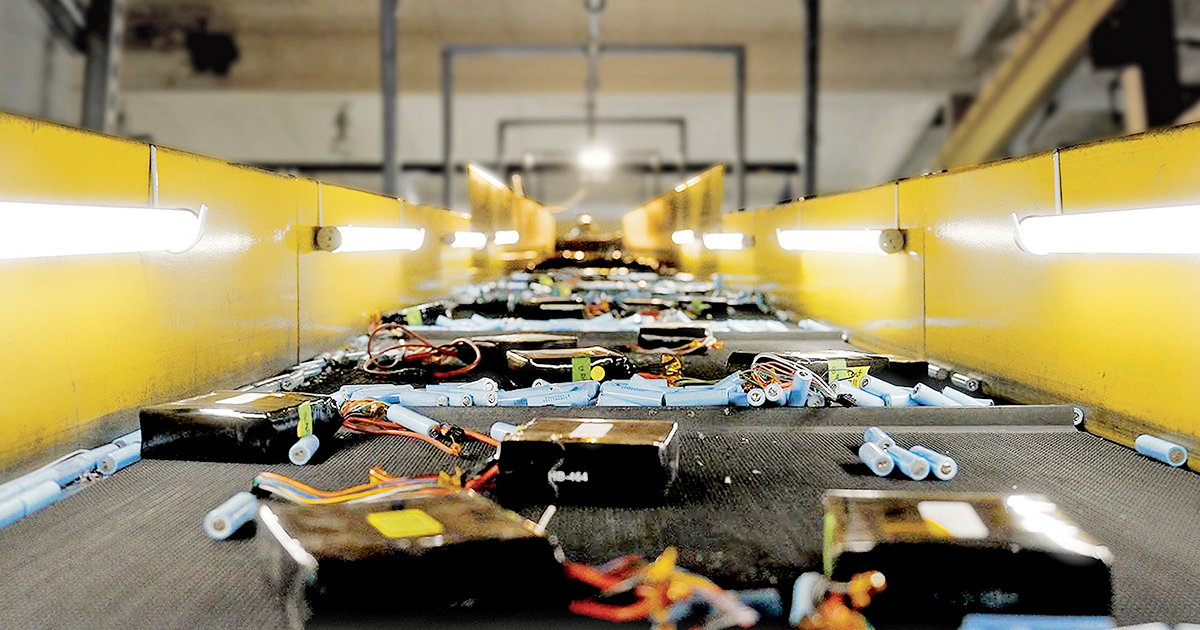 As the electric vehicle market expands, so is a new North American battery-recycling industry.

Its aim: to clean up the battery business and help EVs live up to their promise of reducing global carbon emissions.

“There’s no difference between the materials we produce and what the mining industry produces,” said Tim Johnston, co-founder and chairman of Toronto-based Li-Cycle Holdings Corp. “It’s just really about how much can you actually recover practically from that battery at the end of its life.”

EV batteries today are made of materials from an international network of mining projects, processed along a lengthy supply chain anchored in China, Japan and South Korea. For an EV to offset the carbon emitted in mining and manufacturing its battery, it must see tens of thousands of miles of driving, according to analysis by researcher BloombergNEF.

Recycling the battery will help improve the overall carbon-reduction value of EVs.

Li-Cycle is among North America’s leaders in battery recycling on processing capacity. It has two operating processing plants — in Kingston, Ontario, and New York state — each capable of breaking down 5,000 tons a year of end-of-life lithium ion batteries of all types and sizes. Its pipeline of projects under development will add 45,000 tons of annual processing capacity at three U.S. plants and one in Norway.

Johnston said a steep ramp-up in mining over the next decade will be critical to getting enough battery materials into circulation. But once that happens, he said, the industry must turn to recycling to operate sustainably.

By 2030, Li-Cycle estimates new EV batteries will contain between 10 and 20 percent recycled materials.

Eventually, that figure could reach as high as 95 percent, though that will require efficient recycling and far more end-of-life batteries than are currently available.

With widespread EV adoption still years away, end-of-life battery material is expected to remain in short supply through the 2030s. The limited feedstock has made location a key early consideration for recyclers.

Nevada-based Redwood Materials, launched by Tesla Inc. co-founder J.B. Straubel in 2017, built its first battery-recycling facility about 30 miles from Tesla’s Gigafactory 1 in Reno, Nev. It is also near California, home to the largest concentration of in-use EVs in the U.S.

As Redwood waits for the necessary quantities of end-of-life batteries from EVs to increase, waste from the battery-manufacturing process and batteries from commercial and consumer electronics are key sources of material, said Alexis Georgeson, Redwood’s vice president of communications and government relations.

Redwood has the capacity to process about 20,000 tons of battery material a year across several facilities in northern Nevada. The company wants to triple that footprint in the near term.

Unlike Li-Cycle, which intends to supply producers of battery cathodes and anodes with recycled materials, Redwood plans to produce those components internally.

Localizing and integrating the different steps will help drive down cathode and anode costs, which today account for about 65 percent of battery-cell price tags, she said.

Having struck partnerships with companies such as Panasonic, Envision AESC and Ford Motor Co., Redwood is now scaling up its recycling capacity and mapping out plans for a cathode manufacturing plant expected to open in 2025.

Li-Cycle has put together similar partnerships. Among other deals, it signed a recycling agreement last year with Ultium Cells, the General Motors and LG Energy Solution joint venture.

In January, Li-Cycle detailed plans to co-locate a recycling facility with a 15,000-ton annual capacity at GM’s new battery plant in Warren, Ohio, simplifying the logistics and lowering costs. Johnston said for every ton of batteries built, 100 to 220 pounds of battery material ends up as waste.

Other recyclers are at various stages of development.

Quebec-based Lithion Recycling, for instance, opened a demonstration facility in Montreal in 2019 and is developing a commercial-scale operation.

In January, it closed the first portion of a $125 million funding round, giving it the capital to build a plant capable of processing 7,500 tons of spent battery material per year. Lithion plans to open that facility by the end of 2022, and then a complementary plant by 2024 that will extract the individual battery metals from the waste, readying them for reuse in new batteries.

Among other partners, Lithion struck a deal with Hyundai Canada last March to recycle some of the batteries from that brand’s growing number of EVs and hybrids.

Jean-Christophe Lambert, Lithion’s business-development manager, said Quebec’s high uptake of EVs and its mining history make the province an ideal locale to scale up its technology.

The Montreal site will also keep it close to a source of batteries, minimizing risks and costs associated with transporting hazardous material, Lambert said.

“As close as you can be to a large volume of batteries, the better it is.”

Like other recycling startups, Lithion is working on aggressive expansion. It plans to use a licensing model to team up with companies that have existing recycling networks but lack the proper technology to process batteries.

In January, it signed one such countrywide deal with a South Korea-based construction and recycling company, and it is in “advanced discussions” with partners in both the U.S. and Europe, Lambert said.

Moe Kabbara, senior consultant with Dunsky Energy Consulting in Montreal, said the growing investment in recycling and second-life applications will help the EV sector nail down its circular-economy credentials.

But it will take time.

“We’re going to need to mine the resources today because there’s an immediate shortage in the next five to 10 years,” Kabbara said. “And until the recycling comes on line, it’s going to play a complementary role meeting the demand for the materials.”