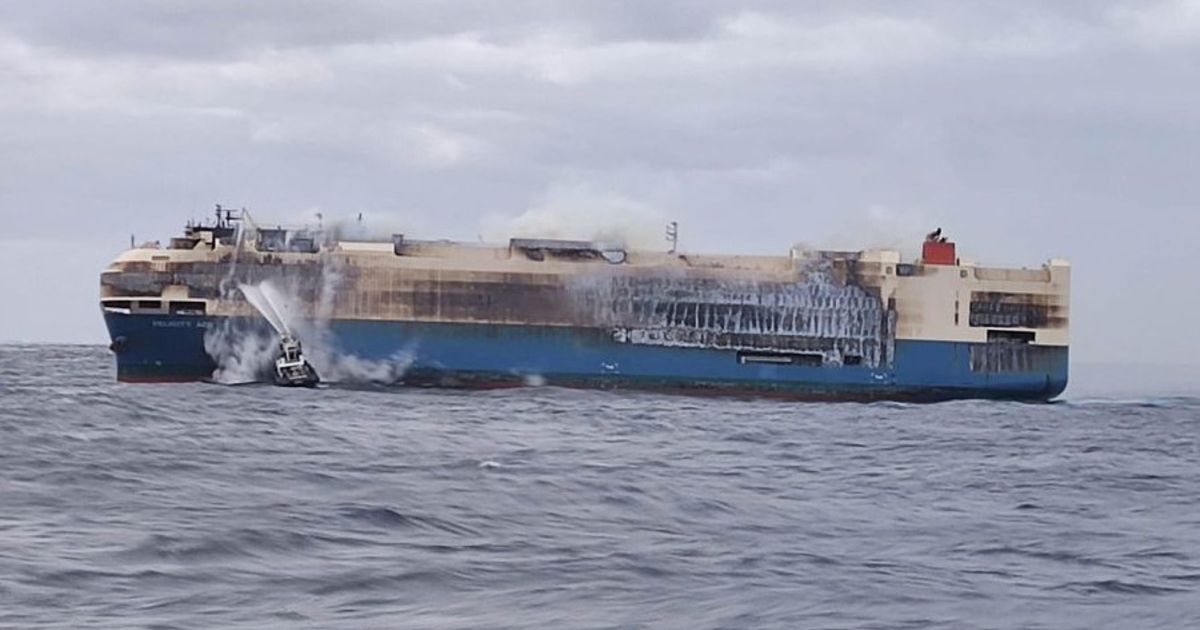 LISBON — A fire which swept through a cargo ship carrying thousands of Volkswagen Group vehicles and adrift off the coast of Portugal’s Azores islands has lost its intensity, probably because there is little left to burn, a port official said.

The Felicity Ace, carrying about 4,000 vehicles including VWs, Porsches, Audis, Bentleys and Lamborghinis — some electric with lithium ion batteries — caught fire in the middle of the Atlantic Ocean on Wednesday.

The 22 crew members on board were evacuated the same day.

“The fire has subsided in recent hours,” João Mendes Cabeças, captain of the nearest port in the Azorean island of Faial, told Lusa news agency, saying there was probably little combustible material left to burn.

Cabeças told Reuters over the weekend lithium ion batteries in the EVs were “keeping the fire alive,” adding that specialist equipment was required to extinguish it. It was not clear whether the batteries sparked the fire.

He also said the fire was spreading closer to the ship’s fuel tanks.

“Our concern has been with pollution since the ship has large amounts of fuel on board and car batteries but so far there are no hotbeds of pollution,” Cabeças told Lusa.

As the fire’s intensity ebbs, firefighting teams and technicians might be able to board the vessel to prepare towing it to either Europe or the Bahamas, Cabeças said.

Bloomberg, quoting an internal VW email, reported Friday that 3,965 vehicles are on board the ship. About 1,100 Porsches and 189 Bentleys were on board, spokespeople for the car brands said. Audi, another Volkswagen brand, confirmed some of its vehicles were also on the ship but did not state how many.

VW did not respond to a Reuters request for comment on the next steps to identify the cause of the fire.

U.S. economist Patrick Anderson last week first estimated the initial loss could be $255 million, but by Friday bumped his calculation up to $282 million.

“Looking at the entire cargo, assuming that three-fourths of the vehicles are a total loss, and averaging the wholesale value at a lower amount (to account for the VWs plus some Bentleys and a lot of Audis), suggests this involves about $376,675,000 worth of cargo. Probably three-fourths of that, or $282,506,250 is a total loss, if the ship is indeed still burning as of now (as is reported and for which we have video evidence.)

“Again, we do not have a good assessment of the degree of damage to the cargo from any inspection, but fire, water, smoke, and submersion damage are all overlapping likelihoods for these vehicles.

“These amounts do not include the downstream loss at dealers. It also doesn’t include any salvage, environmental, or other costs, nor the ship itself, nor any lost wages of the crew or costs to the Portuguese that rescued them.”

It’s not the first time the manufacturer has lost merchandise at sea. When the Grande America caught fire and sank in 2019, more than 2,000 luxury cars, including Audis and Porsches, sank with it.

A spokesperson for Lamborghini’s U.S. operation declined to comment on the number of cars the company had on board or which models were affected, but said that they are in contact with the shipping company to get more information about the incident.

Felicity Ace is roughly the size of three football fields.

Reuters, Bloomberg and Philip Nussel from Automotive News contributed to this report.