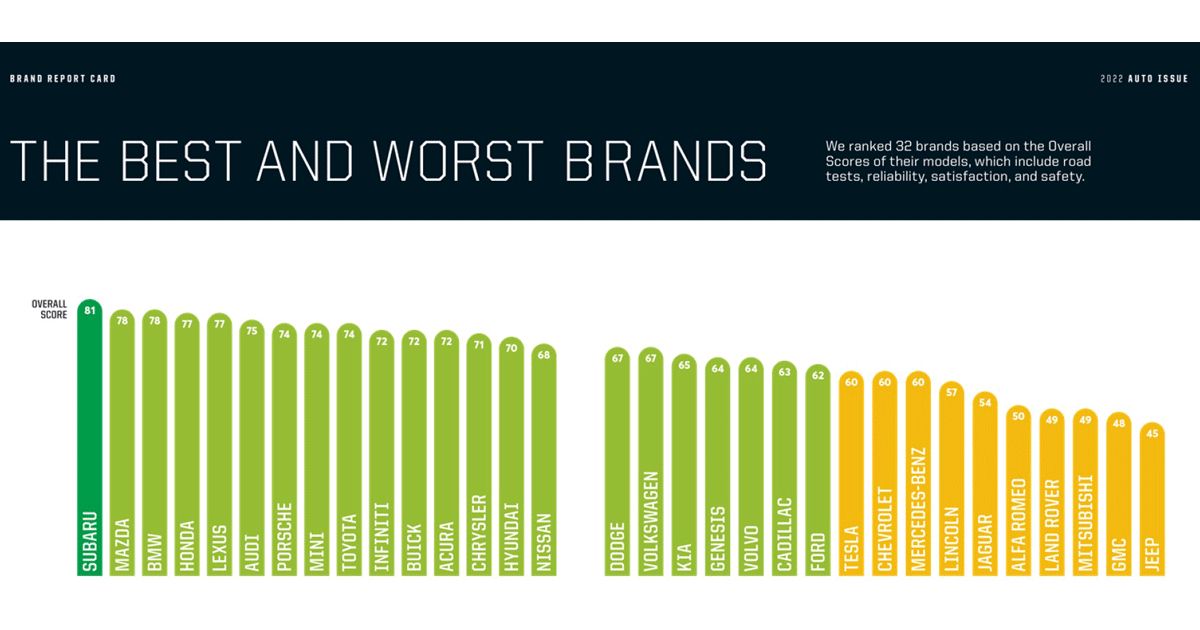 Six of the top 10 brands this year were Japanese; the highest-ranking U.S. brand was Buick, which was 11th.
Jeep dropped three spots to last, replacing Alfa Romeo, which rose four places to 28th.

The biggest drop this year was from Tesla, which fell seven spots to 23rd place. Consumer Reports, in a press release Thursday, cited the “difficult to use” steering wheel in the Model S and Model X. The EV maker’s Model 3 is its only nameplate with a high enough score to be recommended by the consumer news organization.

“It dropped more than any other automaker, kind of due to their own decisions,” Jake Fisher, senior director of automotive testing at Consumer Reports, told Automotive News.

For the second year in a row, Consumer Reports gave Green Choice designations to the cleanest, lowest-emitting passenger vehicles. Toyota led with 11 Green Choice models, even though it does not have any battery-electric vehicles currently on the market.

Although both Nissan vehicles are priced under $25,000, they still are equipped with many of the same luxury and safety features associated with high-end brands, Fisher said.

“Advanced safety systems have really gone down the line and are not just for luxury vehicles anymore,” he said.

The other cars on the list are the Subaru Forester, Toyota Prius/Prius Prime, Kia Telluride, Honda Ridgeline and Lexus RX/RX Hybrid.

“We started driving the vehicle, and it is just a terrific vehicle. It’s quiet, comfortable and has a lot of technology, but it is really easy to manage it,” Fisher said.

The Toyota Prius is on the list for the 19th year in the row, longer than any other model.

To be among Consumer Reports’ top picks, a vehicle must deliver the latest safety features and have some of the highest overall scores in other tested categories, the press release said. It conducts more than 50 tests on each vehicle it evaluates, including braking, handling, comfort, convenience, safety and fuel economy.