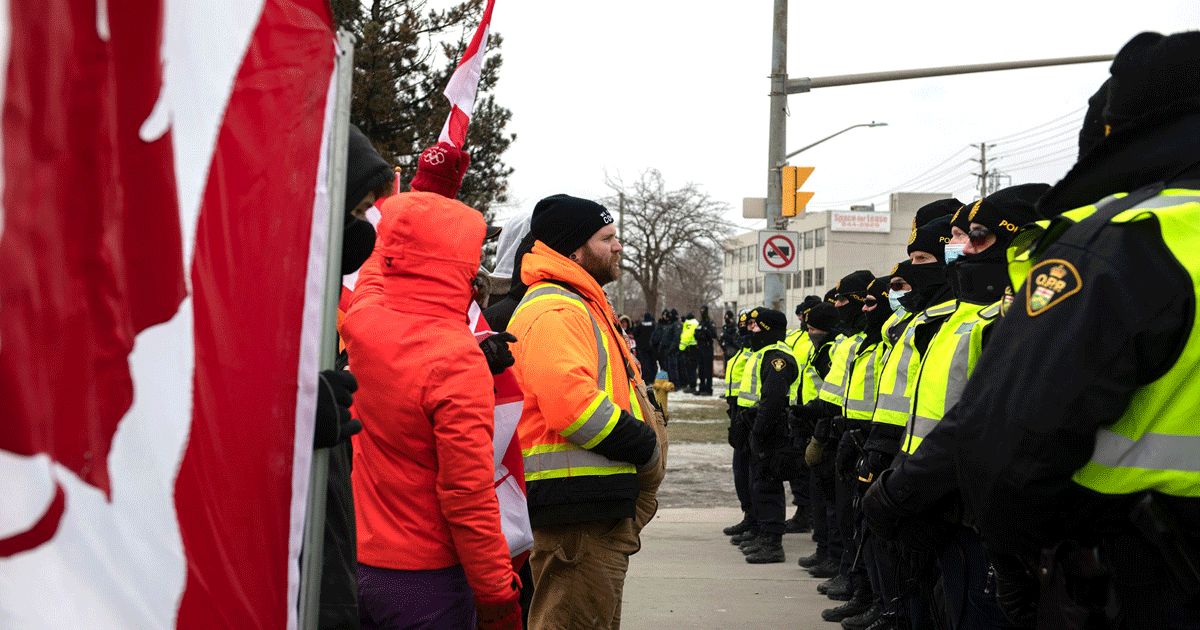 Canadian police cleared protesters and vehicles in Windsor, Ontario, that had blocked a vital trade route along the border with the United States, with some arrests, but the bridge was not yet open to traffic on Sunday.

The arrests came after a tense standoff between Canadian police and demonstrators since Friday when a court order and threats of arrest failed to end the blockade of the Ambassador Bridge,  which entered its sixth day on Sunday.

Windsor police said in a tweet Sunday at 8:14 a.m. EST that “enforcement actions continue” and “arrests being made.”

Click here for all Automotive News coverage of the 2022 Border Protest.

On Saturday night, the protest was still going on and police had pushed the demonstration only 500 yards from the original rally point at the foot of the bridge. But they sealed off side streets to keep more cars from coming in as they worked to clear Huron Church Road and restore bridge traffic.

The rally continued into the night, as the large crowd faced off peacefully with the police who seemed intent on avoiding violence. Demonstrators waved Canadian flags and bellowed shouts of “Freedom!”

President Joe Biden has asked Prime Minister Justin Trudeau to use federal powers to end the blockade of the Ambassador Bridge, North America’s busiest land border crossing. Since Monday, protesters in trucks, cars and vans have blocked traffic in both directions, choking the supply chain for Detroit’s carmakers.

“These are people who have been told by protest organizers that they’re violating no laws,” Michael Kempa, an associate professor of criminology at the University of Ottawa, told CBC News. “So the police have a tough challenge on their hands in that they’re constantly trying to demonstrate to people that their protest is, in fact, illegal. That’s why they’re moving so slowly. It’s just a constant communicative strategy.”

Ontario’s Superior Court granted an injunction Friday to end the blockade, hours after Ontario Premier Doug Ford called a state of emergency in Canada’s largest province and Prime Minister Justin Trudeau told protesters that it’s time to go home. A larger protest has been taking place for more than two weeks in Ottawa, where hundreds of semi trucks have blocked downtown streets, including the one in front of Canada’s parliament.

The Ambassador Bridge between Windsor and Detroit has been closed almost entirely since Monday night. The conduit carries about one-quarter of the commercial goods trade between the U.S. and Canada — an estimated $13.5 million an hour.

It’s particularly vital to the auto sector, which relies on a supply chain that includes assembly plants and parts makers in Ontario and Quebec. Automakers including General Motors, Ford Motor Co., Stellantis and Toyota Motor Corp. have been forced to curb production this week for lack of parts. An association of auto parts manufacturers was among the parties that applied for the court injunction.

The demonstrations have had staying power in Canada in large part because police, wary of stoking violence, have hesitated to make arrests and clear the blockades.

Ontario’s premier Friday called the situation “a pivotal moment for our nation” and said the eyes of the world were watching how Canada and its leaders deal with public unrest over vaccine mandates and Covid-19 restrictions. His government enacted new powers to end the blockades, including the threat of fines of as much as C$100,000 ($78,500) and jail time.

Police passed out fliers Friday night at the bridge protest, warning of the penalties for not leaving. But many protesters said they had no intention of budging.

“This is about freedom. And this is about our rights being stolen from us,” said Ronald Lyons, who was there with his adult son. “I’m willing to starve for this country.”

Another protester who declined to give her full name said she was willing to be arrested rather than back down. The woman said she was a former health-care worker who lost her job because she refused to get vaccinated, and now works as a supermarket cashier for half the pay.

On Saturday morning, reports indicated that the blockade was ending and one protester told local radio station WWJ 950 that their mission had been accomplished. That didn’t happn.