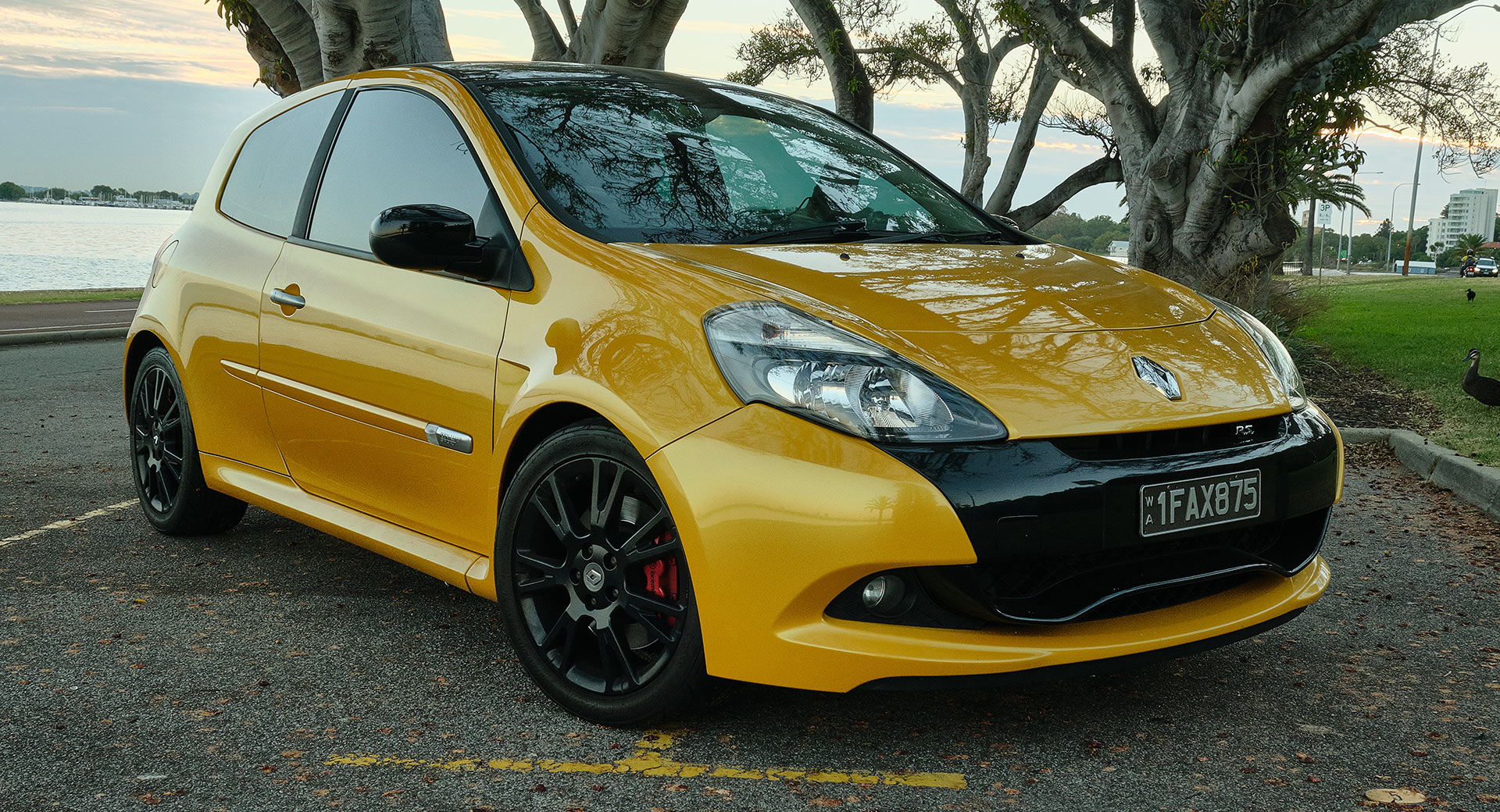 The third-generation Renault Clio RS 200 was always a car that intrigued me but I must admit, it was never a car I truly lusted after. However, after daily driving one for the past nine months, I’m disappointed I didn’t bite the bullet and buy one sooner.

Renault Sport has long led the way in the world of hot hatches and been responsible for more all-time great hatches than any other automaker (that includes Volkswagen and Honda). The performance division of the French automaker first cut its shops in the world of rallying and has dipped its toe into Formula 1 on a number of occasions through its racing division. But it is Renault Sport’s road cars that made it great.

Do a quick search online for the greatest hot hatches ever produced and don’t be surprised if Renault Sport models make up more than half of them. From the iconic Clio Williams launched in 1993 through to the weird and wacky Clio V6, as well as all-time greats like the second-generation Clio II 182 Trophy and Mk3 Megane RS, there’s no denying that the French know how to create a hot hatch. The Mk3 Clio RS 200 might be the finest of them all. 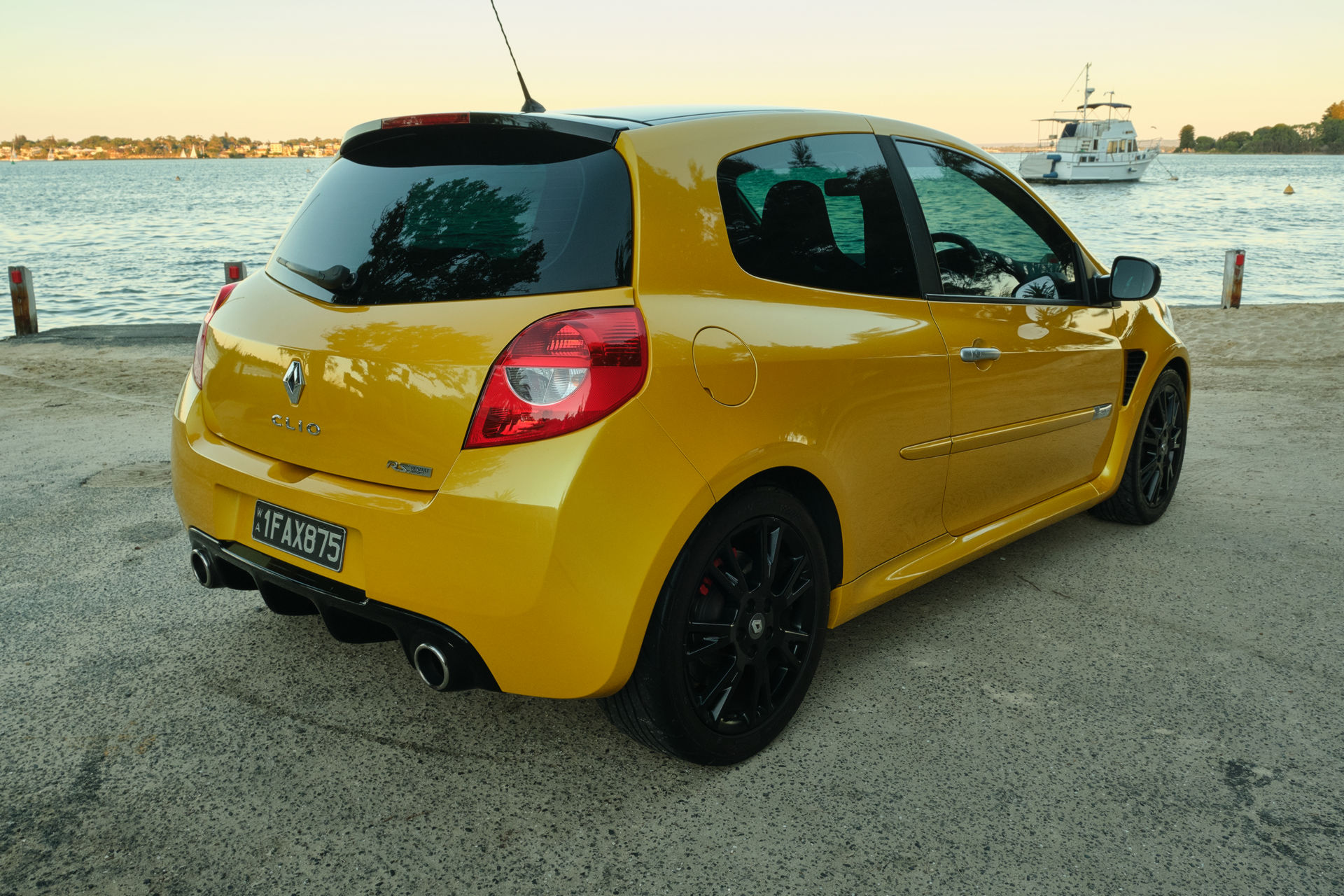 After moving across Australia from Melbourne to Perth last year, I found myself in need of a new set of wheels. I was looking for something small and fun and did consider a Megane RS 265 or RS 275 but couldn’t quite justify the price. The Clio RS 200 came across my radar purely by chance after I saw one listed up for sale on Facebook Marketplace.

While the third-generation Clio RS 197 and 200 models were quite popular throughout Europe when they launched, it is thought that just a couple hundred examples found their way to Australian shores. As such, they rarely come up for sale so you can imagine my surprise when I found this example for sale with a AU$13,000 (US$9,248) asking price. After exchanging a few text messages with the owner, I arranged to inspect the car.

To be completely honest, I wasn’t convinced I would buy it but I thought at the very least, I could have the chance to test drive what I knew was an all-time hot hatch great. Indeed, even after checking out the car in person and assessing the immaculate bodywork and the well-maintained interior, I wasn’t won over. That changed the moment I started to drive it. I immediately offered the owner AU$10,000 ($7,114), thinking that would be the end of it. He called me a couple of hours later accepting my offer. 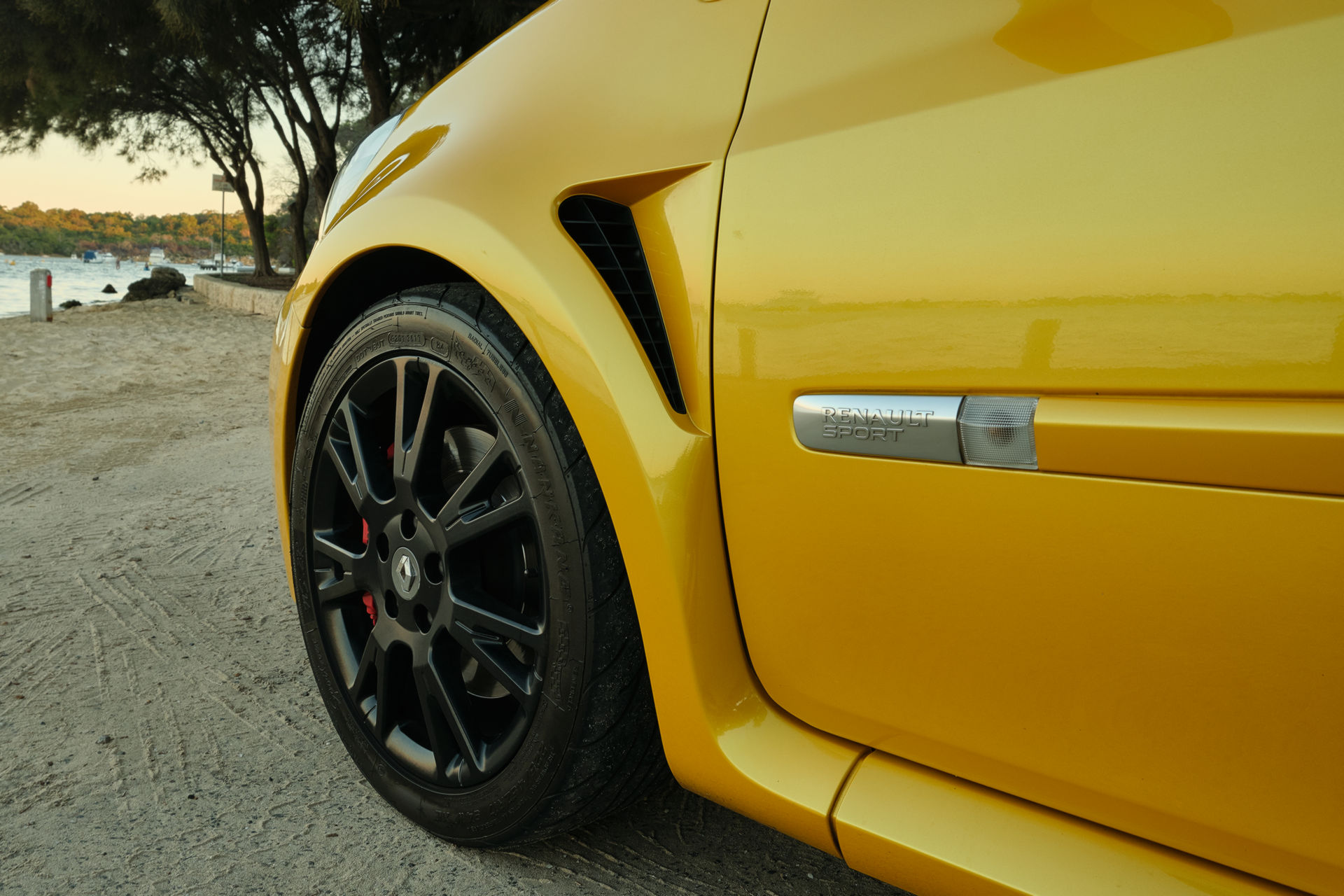 My little Clio RS 200 isn’t just a standard variant but the Australian Grand Prix edition that was offered exclusively in Australia and limited to just 31 examples. All units of the AGP are finished in Renault Sport’s iconic shade of Trophy Yellow with a gloss black roof, making it the only version of the Mk3 Clio RS offered in this configuration. It also came standard with 17-inch matte black Speedline wheels, gloss black accents across the front bumper and diffuser, and perhaps most important of all, Recaro’s superb CS Sportster seats, later used in the 2015 Ford Focus RS, among others.

Funnily enough, my car is No. 31 of the 31 units produced and was formerly owned by Renault Australia itself and used as a press and promo car back in the day. Mark Webber signed the bonnet when the car was unveiled at the 2011 Australian Grand Prix, although I suspect Renault Australia kept that bonnet for itself before selling the car. 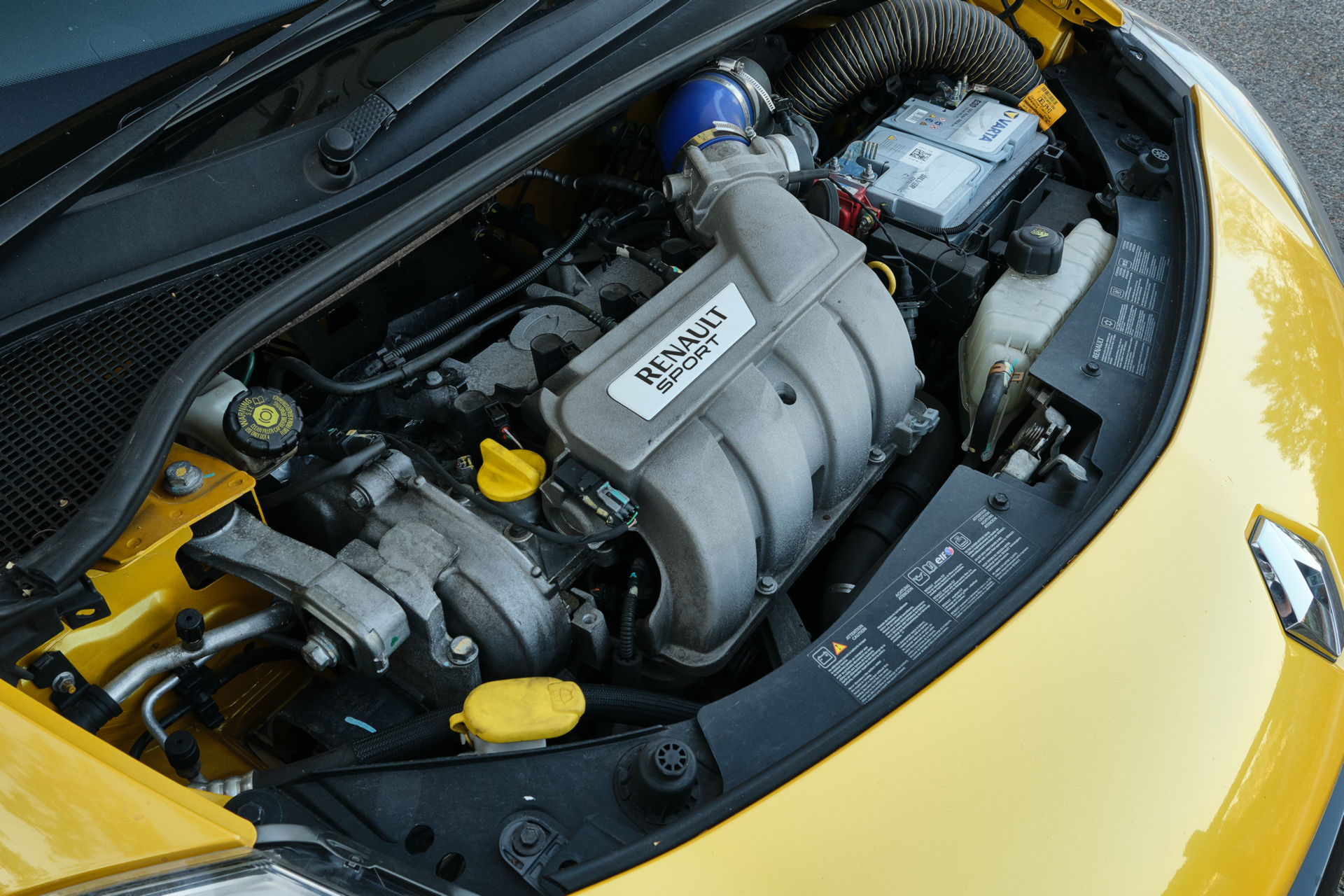 Powering the Clio RS 200 is Renault’s F4R engine, a 2.0-liter naturally aspirated four-cylinder used in a handful of Renault models but upgraded for use in the Mk3 RS 197 and later the 200. As the model name implies, it pumps out 200 PS, the equivalent of 197 hp or 147 kW and 158 lb-ft (215 Nm) of torque. Coupled to this engine is a six-speed manual transmission driving the front wheels.

Much like some of the 2.0 liter engines produced by Honda in the early and mid-2000s, the F4R is a firecracker. It revs through to a touch over 7,500 rpm and really thrives when pushed beyond 3,000 rpm, even though it isn’t quite as characterful as Honda’s K20 engine. 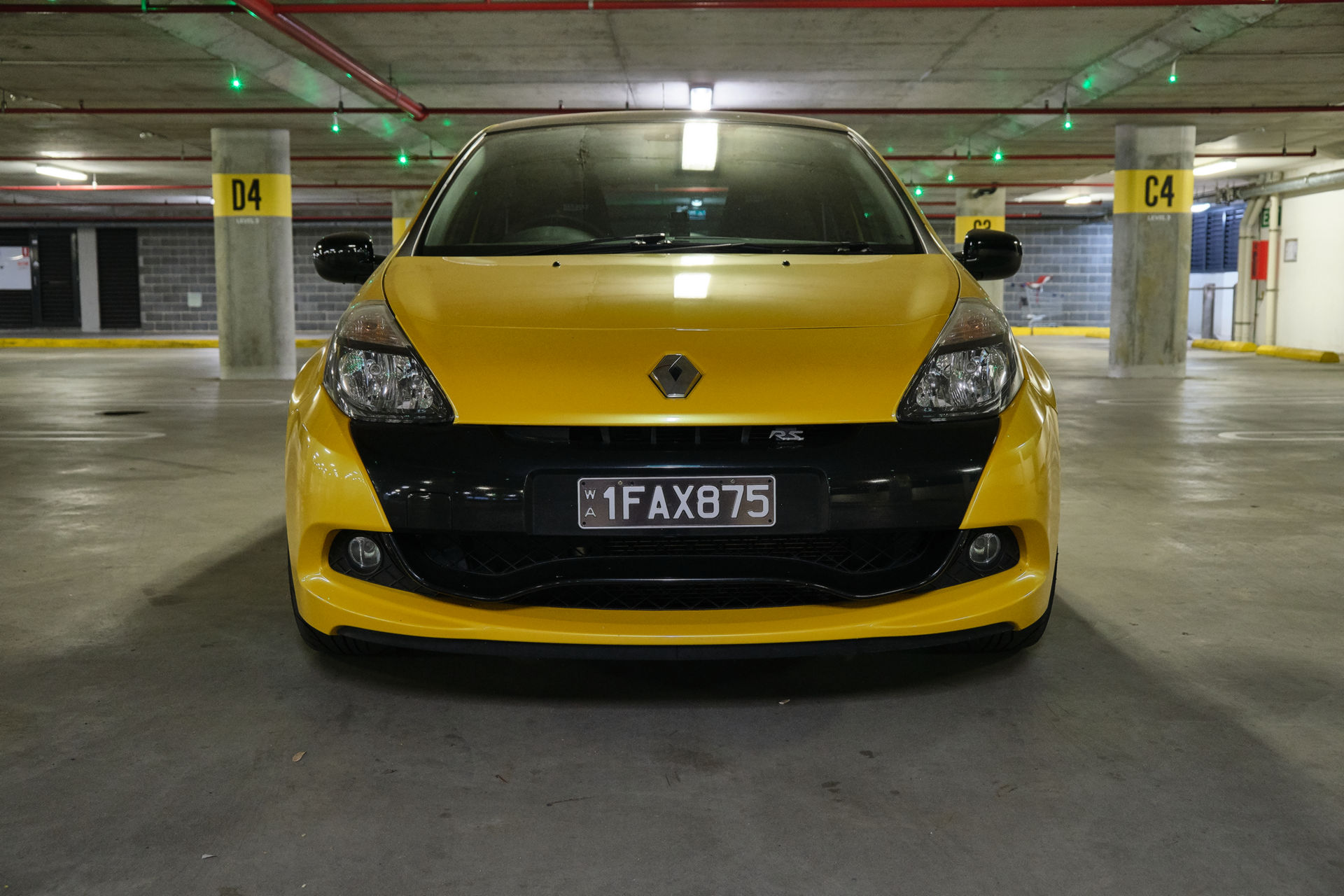 The previous owner of my Clio RS 200 AGP equipped it with an aftermarket air intake and a Miltek non-resonated catback exhaust. It’s hard to know if these increased power but they certainly add to the auditory experience and when you pin the throttle, the car screams all the way through to the redline. As you approach the rev limiter, the instrument cluster beeps, alerting you to the perfect time to shift while allowing you to keep your eyes fixed on the road ahead.

Low-end torque is reasonably impressive for an engine of this kind and was improved for the RS 200 over its predecessor, the RS 197. There is a little dead spot in the power band at the 2,500 rpm mark, a well-known quirk of the car, but if you keep the revs above that, it’s a non-issue.

The six-speed manual is superb. It is better weighted, more notchy, and provides a more engaging experience than the six-speed ‘box of the current Megane R.S. Trophy. It’s not as precise as some of the finest stick shifts from Honda and Porsche but it’s not far off. The clutch has an excellent feel and the engine and transmission combination encourage you to drive the car at ten-tenths whenever possible. The pedals have also been perfectly positioned to make hell-and-toe shifting and rev-matching a breeze.

However, it’s not simply the engine nor the transmission that makes this Clio RS 200 AGP special; it is the way it performs when the roads get twisty. 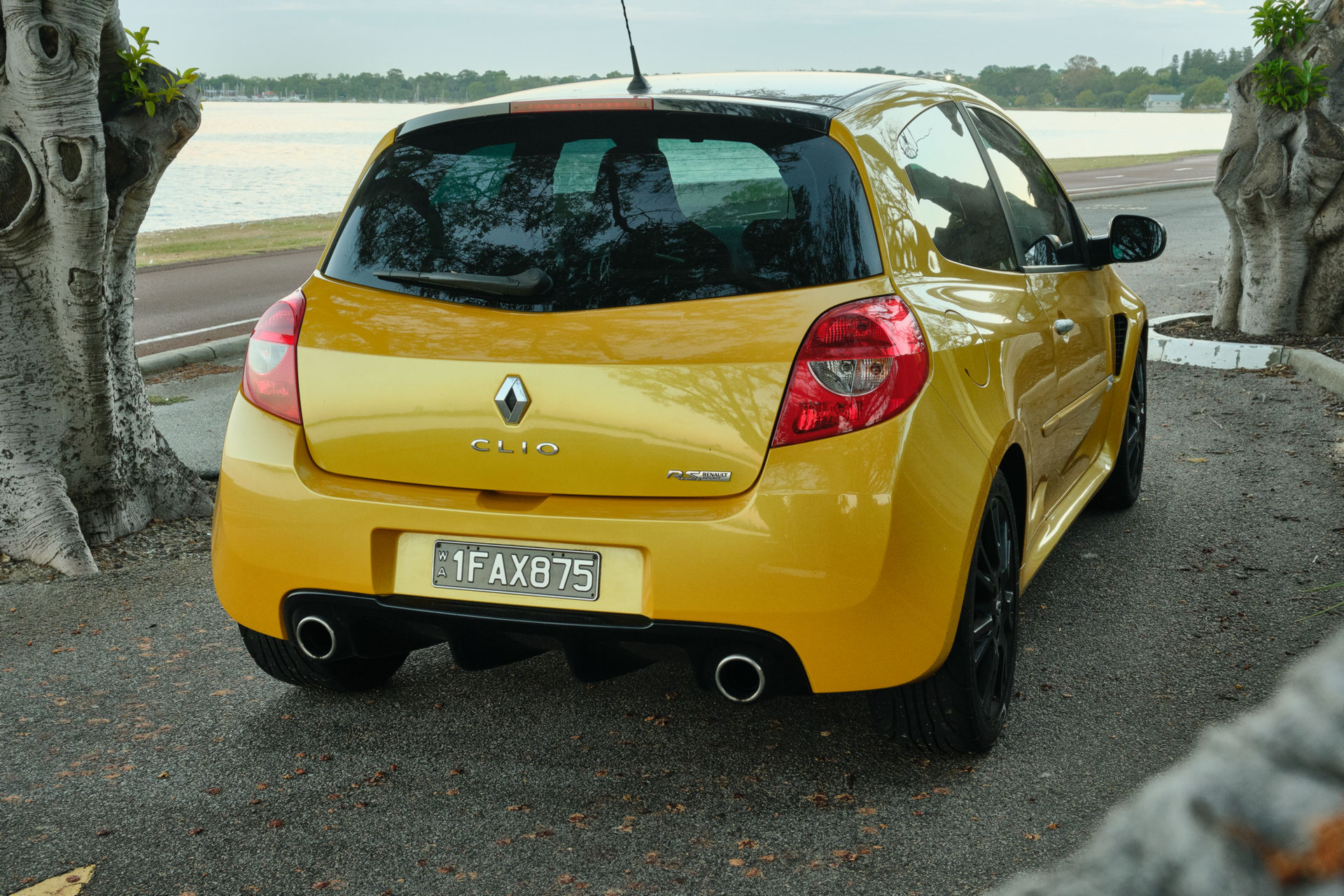 The handling is truly spectacular

‘Instantaneous’ is perhaps the best word to use when describing how the Clio RS 200 AGP tips into a corner. Given that it weighs just 1,240 kg (2,733 lbs), it shouldn’t come as a surprise that the hatch handles well but little can prepare you for just how sharp it is. Compared to all modern-day hot hatches, the steering of the Clio is quite heavy yet incredibly quick and responsive. Turn the wheel just a couple of millimeters and the car will respond. Turn hard into a corner and the Clio bites into the apex with ferocity.

When the car originally rolled out of the factory, it came equipped with Continental Sport Contact 3 tires but mine has been fitted with a set of Nankang NS2R semi-slicks measuring 215/45R17 at all four corners. These tires produce tenacious levels of grip when warmed up but they do produce quite a lot of roar at highway speeds. A set of Goodyear Eagle F1 Asymmetric 5s are on my shopping list. 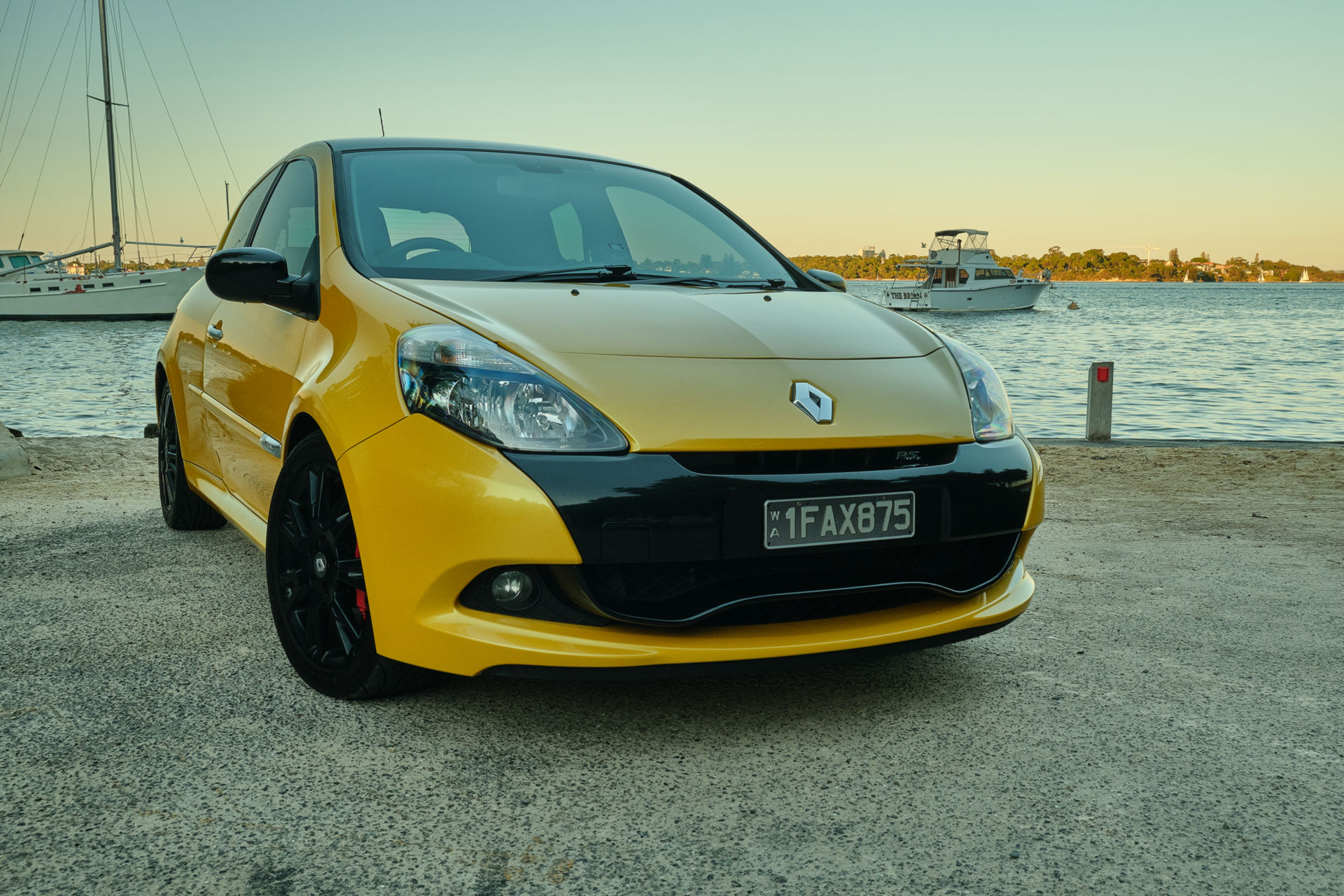 The adjustability of the Clio RS mid-corner is superb. In the very rare event where you experience a touch of understeer, it is easy to control and the rear end does its part to thread the car through tight turns.

Braking is also excellent, no doubt aided by the fact my car has braided lines in addition to the standard four-piston Brembo front and twin-piston rear calipers, clamping down on 312 mm (12.2 inches) front and 300 mm (11.8 inches) rear discs. Initial feedback is exceptionally strong and I’ve never encountered any fade issues, including during a tough day of Motorkhana. In just a few weeks, we’ll be heading to the track in the car to really put these brakes to the test. Stay tuned.

Like all Renault models equipped with a Cup chassis, the ride of the Clio RS 200 AGP is definitely on the firm side. In fact, for the vast majority of motorists, we suspect that it would be far too harsh. At slow speeds, it bounces over the smallest of road imperfections but once you build up some speed, the suspension does a better job of soaking up bumps. As mentioned, this is my daily driver and I’m more than happy to tolerate the firm ride for the excellent handling and communication that it provides.

How about creature comforts?

The interior is basic, to put it lightly. The layout of the media and climate controls are a little odd and there is plenty of black, scratchy plastic. No doubt the highlight of the cabin is the Recaro CS seats but they are mounted way too high which is odd as the Mk3 Megane RS also offers the same seats but has lower-profile mounting brackets. Other features that make the RS easy to live with are standard Bluetooth connectivity, cruise control, and the ability to completely turn off the traction control. Another nifty feature is the RS Monitor that can measure things like lap times, acceleration runs, brake pressure, live horsepower and torque figures, and G-forces.

While it is true that French cars don’t have the best reputation for reliability, all Clio RS 200 owners I have spoken with say it is largely bulletproof. The most significant maintenance cost owners will encounter is the timing belt and water pump which need to be replaced every four years. The gearbox is also a little finicky when cold and the synchros are known to wear prematurely, although I haven’t experienced this issue (fingers crossed…). The Recaro CS bolsters are also prone to wear like mine. There are also some oddities that you would only expect to find in a French car, such as the inability to pull up the front wiper blades without them fowling on the bonnet. 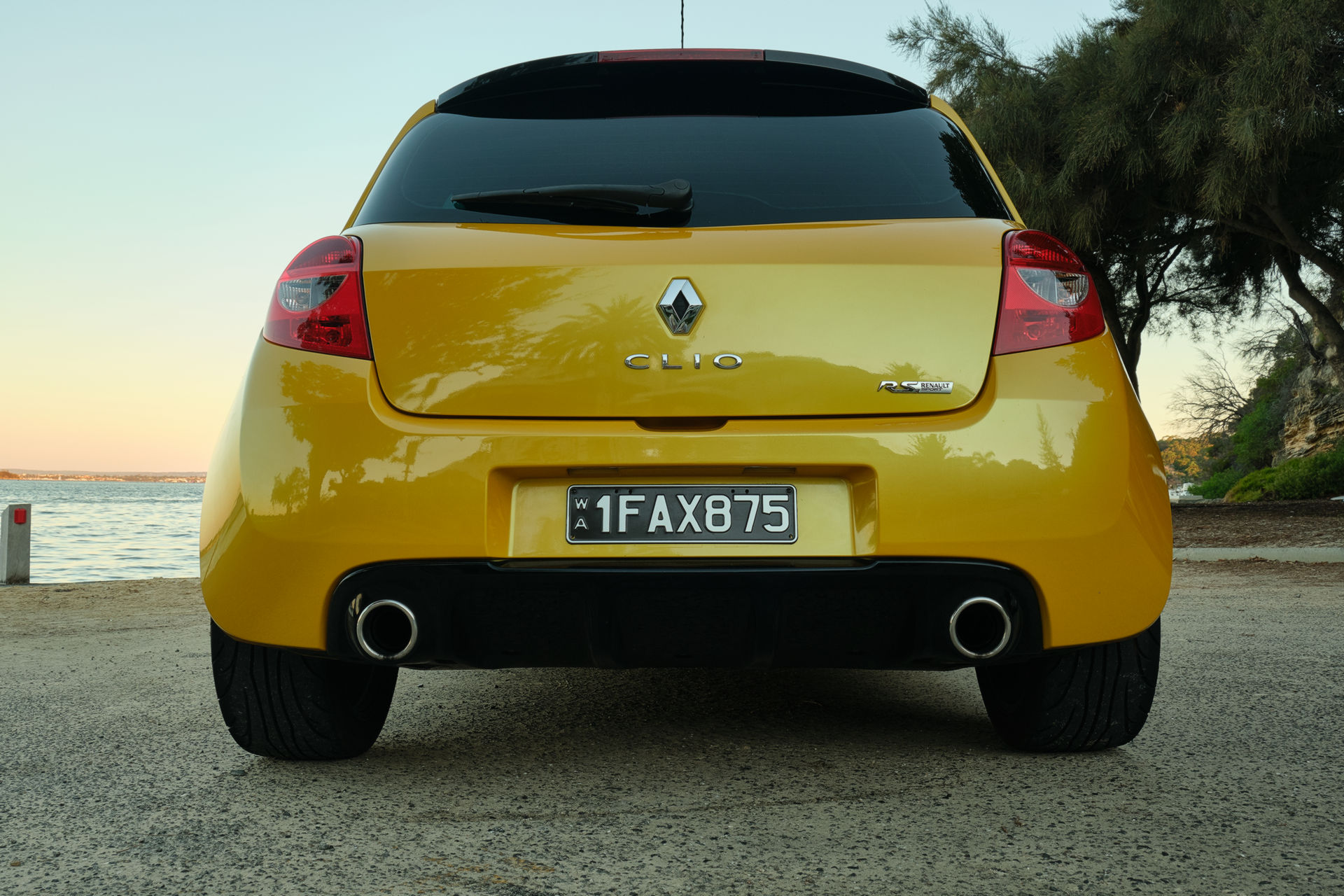 There are heaps of awesome hot hatches on the market at the moment and with new entrants like the Hyundai i20 N and Toyota GR Yaris, the market is booming. For as impressive as many modern hot hatches are, however, few can match the raw driving thrills provided by a Clio RS 200 Cup like ours. If you live in a market where they are available, we couldn’t recommend it enough.