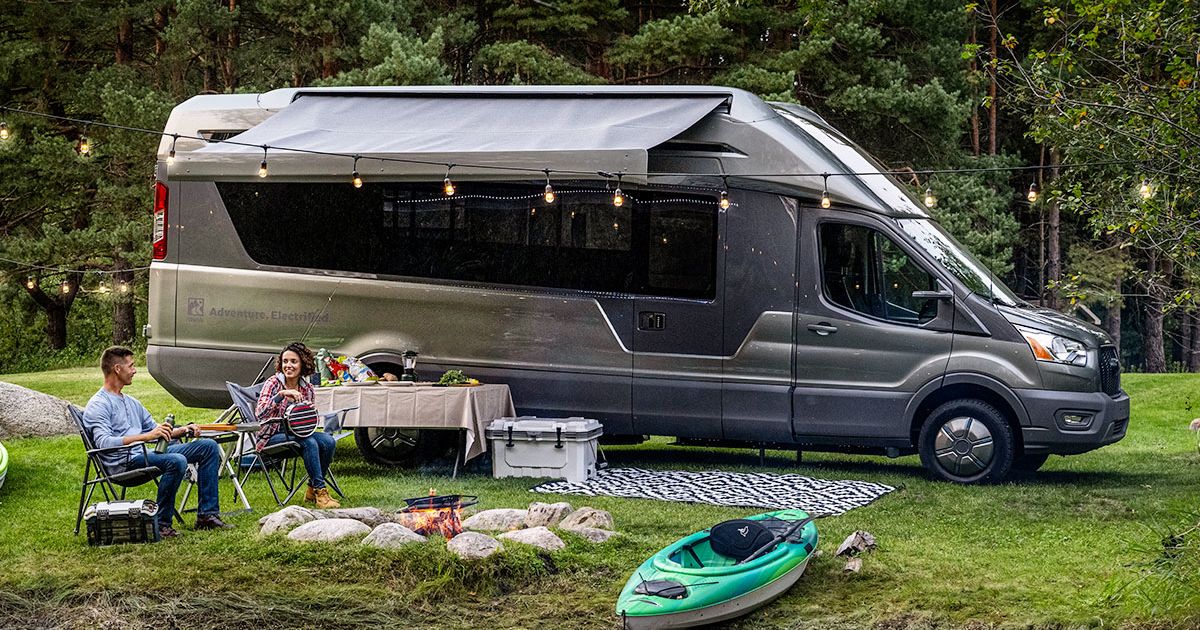 The RV industry is starting to join the race toward zero emissions.

Thor Industries Inc. and Winne-bago Industries Inc. each revealed concepts for electric RVs at the Florida RV SuperShow in Tampa last month. The companies identify electrification as a priority for the next generation of motor homes and towable trailers.

Thor told Shift that it plans to have an all-electric motor home for sale next year, with an electric towable trailer to follow. Thor did not reveal pricing estimates.

For Winnebago, “it could be up to two years before a vehicle like this [e-RV] rolls down the road in sizeable numbers,” company spokesman Chad Reece said. “But some of its technologies could be seen prior to that. [Electrification] is a natural progression in the RV segment. We hear from consumers they have interest.”

Thor’s Vision Vehicle concept was designed to operate using a high-voltage battery and an integrated fuel cell-based range extender. The Elkhart, Ind., company says the concept could travel up to 300 miles on a single charge while powering onboard systems such as HVAC, lights and entertainment. This range matches the company’s research that showed the average RV driver stops every five hours, or about every 300 miles.

The 300-mile distance has another significance: An RV Industry Association survey released last year found that 64 percent of the 800 first-time RV buyers surveyed took trips less than 300 miles from home. Those surveyed bought RVs from April 2020 through the first several weeks of 2021.

While the U.S. charging network is still growing, range anxiety is something RV makers must consider for electric motor homes and towable trailers. Thor considers range anxiety to be the biggest barrier to EV adoption.

In its eStream electric towable trailer concept, Thor partnered with supplier ZF to create an 800-volt battery system that powers the wheels. The goal is to reduce the negative impact of towing on an EV’s charge and range.

In North America, towable trailers are 70 percent of the RV market, and as more automakers introduce EVs, which would be towing those trailers, there’s “a need to innovate,” said Thor Chief Innovation Officer Josef Hjelmaker. EV drivers towing a camper must stop as often as every 90 minutes to recharge their vehicles, and that must change, he adds.

While RV makers tackle this range issue, the association is working with the RV industry “to make sure the [charging] infrastructure is in place and that national parks and outdoor recreation areas aren’t being forgotten as we are putting these investments into EV infrastructure,” says association spokesperson Monika Geraci.

Winnebago, of Eden Prairie, Minn., worked with Lightning eMotors, a Love-land, Colo., company that electrifies commercial vehicles, to design its e-RV concept to travel 125 miles on a single charge while also powering onboard systems. Winnebago expects that range to increase “with improving battery technology,” Reece says.

Winnebago in 2019 formed its Ad- vanced Technology Group, which created the company’s electric motor home concept. The e-RV is built on a Ford Transit platform with an enhanced powertrain on an 86-kilowatt-hour battery that would propel the vehicle and provide power to the living area.

The Thor and Winnebago concepts both include technology that informs users of charging station locations as they travel.

Said Hjelmaker: “The next generation, the millennials and Gen Zers, are joining the RV life with new expectations of ease of use, ownership, digital presence and a shift toward more sustainable solutions.”