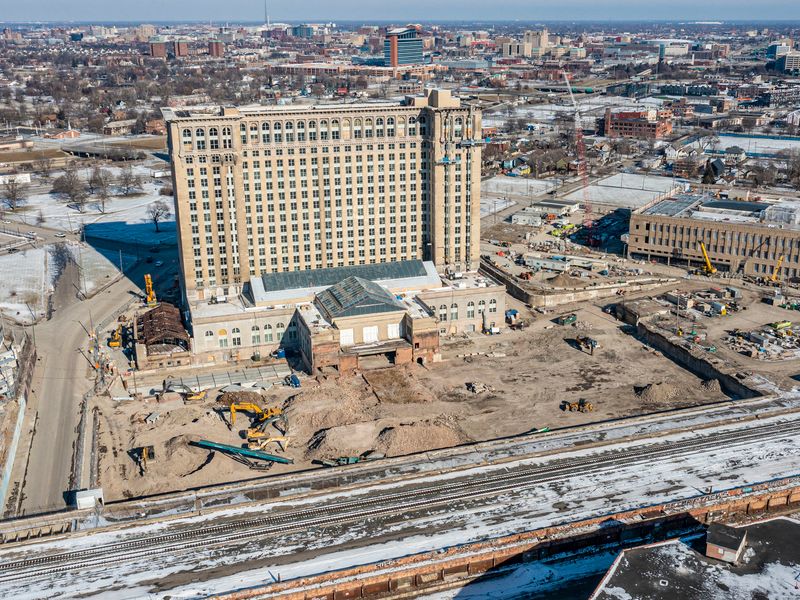 Ford Motor Co.’s recent bets on the future of the automotive industry it helped define say a lot about where Michigan policymakers should be placing their next economic bets.

The automaker credited with putting the world on wheels is investing nearly $1 billion to transform Detroit’s oldest neighborhood into an auto tech hub for 5,000 highly paid workers aimed at attracting not just startups in the development of new mobility technologies, but other automakers.

Lost in all of the hand-wringing by the state’s political class in recent months over Ford’s decision to invest $11 billion in EV and battery plants in Kentucky and Tennessee is the fact that Michigan got Corktown.

And Corktown could be pivotal to the future of the Blue Oval.

The train station-centered campus, slated to start opening this summer, is where Ford hopes to attract the best minds that can solve the auto industry’s biggest conundrums — defeating range anxiety, modernizing an electric grid to charge millions of vehicles and programming cars to drive on their own.

“If the train station doesn’t work, it doesn’t matter where Ford puts battery plants, because Ford’s toast,” said Lou Glazer, president and co-founder of Michigan Future Inc., an Ann Arbor think tank. “Somehow a light bulb has to go off that that stuff matters more than whether you get the next battery plant.”

Glazer and others in the economic think tank arena have argued for years that Michigan needs public policies focused on boosting college degree attainment rates as knowledge-based jobs crowd out production jobs rooted in a 20th century labor model.

Despite the enormous potential Ford’s train station project has for both Detroit and Michigan, policymakers here are still chasing jobs assembling batteries instead of jobs inventing new technologies to make batteries capable of propelling an F-150 from Monroe to Mackinaw City and back on a single charge.

These are hourly jobs that will pay an average of $56,160 annually in Orion Township. That’s $23,538 below the median household income in Oakland County, according to census data.

GM said the new jobs at its Ultium battery plant in Delta Township will pay an annual average wage of $46,800, more than $17,500 below the median household income of the Eaton County bedroom communities west of Lansing.

These wages wouldn’t have even qualified for Michigan’s former “Good Jobs” tax incentive that let employers keep their employees’ state income taxes for 10 years if the jobs paid at least the average regional wage.

To be clear, $6.5 billion in new capital investment and thousands of construction jobs for several years are good stimulus for the economy.

But where is the new $1 billion investment in Michigan’s knowledge economy? Where is the workforce investment in the college degree-dependent automotive technology fields that can be traced to decades of prosperity in places like West Bloomfield Township, Novi and Ann Arbor?

There’s been no similar effort of that scale to, for example, invest in the education and retention of software developers to meet the needs of Ford, GM and Stellantis (the automaker formerly known as Fiat Chrysler Automobiles) — or Michigan’s nonautomotive corporate titans such as Dow, Whirlpool, Stryker, Steelcase and Amway.

Rather, there’s been a 20-year disinvestment in higher education in this state, which ranks dead last in state taxpayer-funded need-based financial aid for students.

This is the state of Michigan’s economic policy as it relates to creating more knowledge-based jobs, which, unlike manufacturing jobs, are actually growing.

As Ford’s decision to build its first new vehicle assembly plant in 50 years in Tennessee showed, there’s been a near-obsession by Michigan’s policymakers to match Tennessee in manufacturing. Michigan’s $824 million in total incentives for GM is nearly identical to $884 million in incentives that Ford fetched in Tennessee.

But even the Volunteer State’s manufacturing base is in steady decline. In the past two decades, Tennessee has shed 25 percent of its production jobs. Michigan has lost 30 percent of its jobs in production, according to a Michigan Future analysis of U.S. Bureau of Labor Statistics.

Tennessee, however, saw its knowledge-based jobs increase 26 percent between 2001 and 2020, while Michigan’s knowledge economy employment base grew by a paltry 4 percent, according to labor statistics.

The old adage that success begets success may explain why computer software giant Oracle Corp. is building a $1.2 billion, 6,000-employee campus on 60 acres of riverfront property in Nashville.

The Detroit 3 are in an existential race against Silicon Valley’s tech giants to bring self-driving, zero-emission electric vehicles to market. And that’s what makes Ford’s train station project arguably more important than any battery plant.

“Our future at Ford will be largely invented there,” Bill Ford told Crain’s and Automotive News in a June 2018 interview at the company’s Dearborn headquarters. “And it will become, I believe, a really wonderful magnet for talent, because nowhere else in the country can anybody, will anybody, be able to work in a setting like that and in a Corktown community like that.”

Bill Ford didn’t push his board to invest $740 million of shareholder dollars restoring the old train depot’s Beaux-Arts architectural features to their previous grandeur simply to relocate 2,500 of its employees from office buildings in Dearborn. The automaker is building out space in and around the train station for 2,500 tech workers from other companies in the mobility business to set up shop.

These are companies that perhaps Ford may someday own as it acquires new technologies and evolves. As Tesla has already shown, the EV startups are here to stay and they are starting to grab market share (Tesla has tripled its annual new vehicle output in the past three years).

The auto industry’s acceleration toward electrification shows there’s a lot riding for Michigan on Ford getting its talent-attraction equation correct to compete in today’s knowledge economy.

For evidence of this, look no further than GM, which kept its autonomous vehicle development unit, Cruise LLC, planted in San Francisco to be closer to the Silicon Valley tech talent after acquiring the company in 2016.

Instead of working in GM’s Tech Center campus in Warren or its Renaissance Center headquarters in downtown Detroit, there are now 2,000 Cruise employees in the Bay Region trying to win the software war that will define the auto industry in the coming decades.

In the halls of Michigan government, there’s a deafening silence when you tell a policymaker there are 2,000 GM tech workers in California (what’s more is GM is now looking to hire 8,000 knowledge-based workers this year in engineering, cybersecurity and other technical positions — and it’s not all clear that they have to be based in Warren).

And then there’s Rivian, the electric truck startup with a stock value that is triple what shares of Ford are trading at.

In June 2020, while most of Michigan was emerging from the fog of the early pandemic shutdown of the economy, Rivian picked up and moved its headquarters from Plymouth to Irvine, Calif.

There wasn’t so much as a peep out of policymakers or even business leaders about either of these major losses to Michigan’s automotive knowledge economy.

TechTown’s Staebler contends winning the war for the knowledge jobs surrounding the auto industry is less about tax rates and subsidies and more about college degree attainment rates, good schools, affordable and quality housing, and other amenities, such as walkable communities with easy access to retail and dining.

“This is not sexy stuff,” Staebler said. “You go to Colorado, and they get it.”

In other words, there’s more to economic development for highly coveted tech workers than simply writing a nine-figure check to one of your state’s largest employers.

This is what makes Ford’s Corktown project one that deserves more attention from policymakers on several fronts to ensure it’s both inclusive and successful.

There’s already a transformation of the neighborhood underway. More dense housing is filling up Corktown’s side streets. New restaurants and retail stores are opening along Michigan Avenue.

The missing component is schools — there’s no public elementary school in the neighborhood. This should be a top priority for Mayor Mike Duggan and philanthropic leaders who can make it happen.

“The needle you have to thread politically is Detroit at the same time needs to develop amenities that will attract knowledge workers,” said Tim Bartik, a senior economist at the W. E. Upjohn Institute for Employment Research in Kalamazoo.

With Southeast Michigan’s automotive suppliers encamped in the suburbs, Corktown has all of the ingredients to become the destination for mobility inventors to test out new ideas, said Reilly Brennan, general partner in Trucks Venture Capital, a San Fransisco-based seed-stage VC firm that invests in transportation startups.

Brennan splits his time between San Fransisco and Birmingham. He sees Michigan, and Corktown in particular, as “the garage of transportation entrepreneurship” where innovators can refine their ideas.

Corktown is, after all, just blocks away from the Bagley Avenue site where Henry Ford and his friends built a quadricycle in a backyard shed 126 years ago.

“The best position for Michigan is not to pretend it’s the Silicon Valley, but it’s the garage of the country — where you want to go to play with an idea,” Brennan said. “The state could make it easier to walk into the garage and start banging around.”

With the right policies centered on talent, transit and affordable housing, what’s happening in Corktown could be akin to Amazon’s transformation of Seattle’s South Lake Union neighborhood more than a decade ago, where the online retailer grew into the behemoth it is today.

But policymakers have to get in the game here before it’s too late.