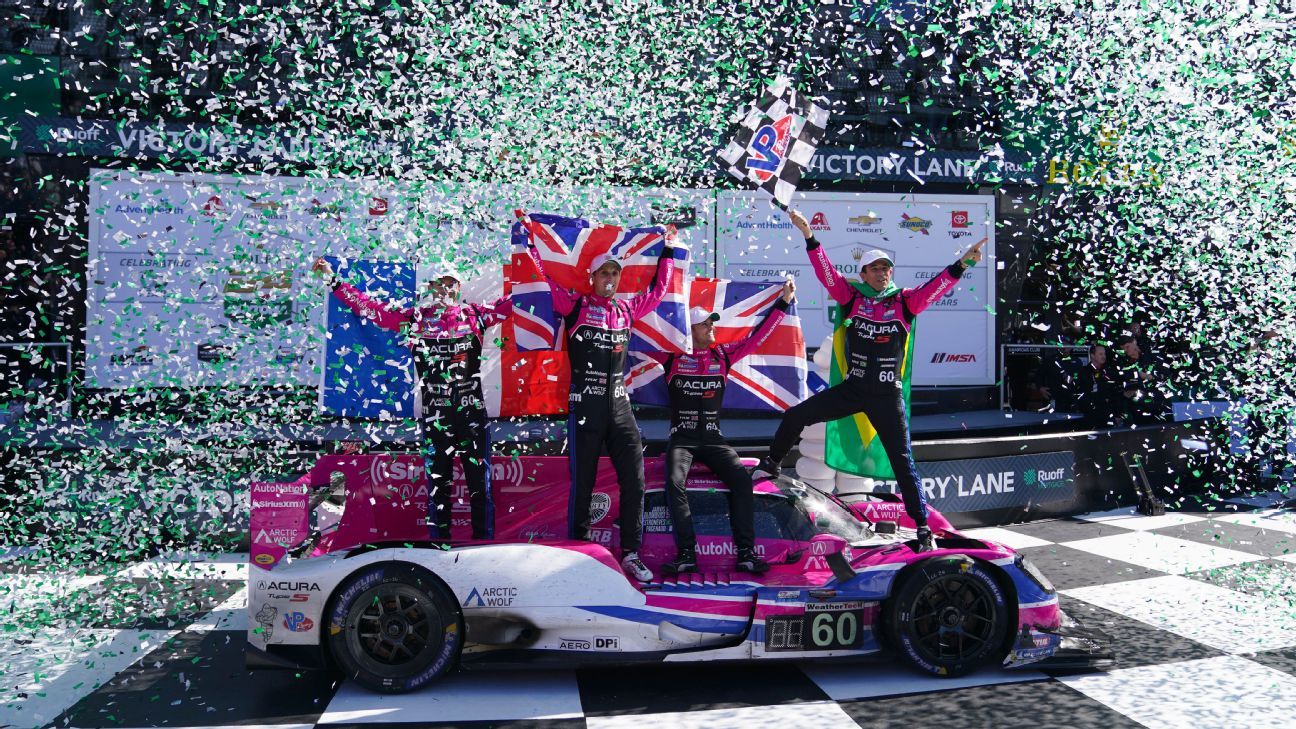 DAYTONA BEACH, Fla. — What a year for Helio Castroneves, the ageless Spider-Man of motorsports.

Castroneves climbed the fence for the third time in a calendar year Sunday after earning another crown jewel victory, this time a second consecutive win in the Rolex 24 at Daytona. The Brazilian closed out the race for Meyer Shank Racing, the team that helped him win a record-tying fourth Indianapolis 500 in May.

In the No. 60 Acura, Castroneves held off Ricky Taylor over the final hour of the twice-’round-the-clock race. Castroneves won his first career Rolex watch 365 days ago as Taylor’s teammate in the No. 10 Acura.

Castroneves denied Wayne Taylor Racing a fourth consecutive win at Daytona International Speedway, where he, of course, climbed the fence with his team in celebration. Now rival-team owner Taylor went to victory lane to congratulate Castroneves.

The win for Michael Shank came on the 10th anniversary of Shank’s first victory in North America’s most prestigious sports car race. That win in the 50th running of the Rolex with the late Justin Wilson and NASCAR driver AJ Allmendinger gave Shank’s fledgling program credibility, and Castroneves since May has helped Shank show the team is a legitimate force.

The 24-hour race remarkably came down to the final minutes in four of the five classes. And it was a huge day for the IndyCar Series, which had five drivers claim Rolex watches.

Colton Herta, Pato O’Ward and IndyCar rookie Devlin DeFrancesco rallied DragonSpeed USA from several laps down to win the LMP2 class, with Herta going door-to-door in the final minutes with Tower Motorsport. Herta came out the victor when the two cars almost touched and Louis Deletraz went off course.

The new GTD Pro class was decided by a frantic battle between a pair of Porsches, and Pfaff Motorsports, which enlisted IMSA reigning co-champion Felipe Nasr as its endurance driver, earned the win.

The field featured 61 cars, the most since 2014, and was run in record-low temperatures. The weather dipped into the low-30s overnight but was a mild 53 degrees and sunny when Castroneves climbed yet another fence.